Magnum opus, masterpiece, chef d’ oeuvre or swan’s song. Regardless of what we choose to name it, we know what we speak of when we speak of an immensely great work of art and in this case film. The ones in this list may be indeed what the word betrays, the master’s greatest work or simply one of their greatest, a cinematic masterpiece overall rather than the director’s most charismatic child.

And the specific masterpieces we concern ourselves with are the ones that for one reason or another, did not reach mainstream cinematic awareness. Some of them are classic yet ignored and some more modern and not so solidly established so far, yet of excellent technical and artistic virtuosity.

Stan Brakhage one of the key figures of experimental and avant garde cinema composed already in 1961 one of the first cosmological tales. Definitely, Brakhage’s masterpiece, Dog Star Man is considered rule breaking because of its second-to-second rapid shift of abstract organic patterns footage, solar photography and handle held camera. However, there is no anarchy in the film but an unnatural balance.

The rapidity in the frame sequences requires the free association of those patterns with creation: an initial darkness, solar imagery, the core of the earth, the blue of the ocean, the cell of an organism, present the tale of the cosmos. The triumph is that this abstraction can be binded and reasoned despite its complete lack of sound and narration.

The film is divided in 5 Parts: Prelude, Part I, II, III and IV. The 26-minute prelude is a strict visual leitmotif of the core elements of the film that will reappear later on. In part II the story is introduced. Still in silence and in between fast cutting “close eye vision”, a man and his dog are seen in their efforts to climb up a mountain. In part II the focus shifts on the birth of a child, filmed in a documentary like manner. Part III and IV conclude the 78 minutes of film with further fast cutting extracts.

Dog Star Man is an iconic piece of experimental film. Nevertheless, it never gained much attention from and popularity with the audience due to its complete absence of story and length, which is not facilitated by the rapid cuts. Despite not being a traditional watch, the beauty of Dog Star Man exceeds its sophistication, as it is not designated for a particular type of viewer because it is a film about existence and human experience itself.

Here’s to one we can talk about for hours: Luis Bunuel’s Viridiana. Creating controversy since its release, with the reception from public and critics not being adamantly positive but an eventual win of the Palm d’Or in Cannes Film Festival, Viridiana is as explicit as it is suggestive. There is duality and there is a slow trance from a plain and reasonable to absurd and miserable.

Viridiana ( Silvia Pinal) is about to take her vows and spent the rest of her life in a convent but before abandoning the outside world she has to pay one last visit to her only surviving relative, uncle Don Jaime ( Fernando Rey). Jaime has a weird fixation on Viridiana, who reminds him of his dead wife. He lies to her about taking her virginity in her sleep, in order to keep her close and prevent her from returning to the convent but Viridiana runs away distraught.

Soon she is notified by the authorities that her uncle has hanged himself, leaving his property to her and his illegitimate son Jorge ( Paco Rabal). Under the false impression that she is impure and unsuited for the life of a nun, she decides to stay and find her own way of doing good. She gathers the poor and homeless and offers them shelter and occupation in the farm of her uncle. However, Jorge’s arrival turns things upside down.

In just 90 minutes of film, Bunuel develops criticism on Catholicism, Marxism and machism, on a very subtle level most of the time, much like a prophet of Pasolini. The crown of thorns that Viridiana is carrying, her wooden cross and her shrill nightgown are all symbols of a faith of guilt, inescapable for the devotee. At the same time the frailty of men is presented through their aggression and manipulation of the female figures and especially Viridiana. Her will strong, rises and rebels against male exploitation but is bent towards the end. However, this bent is reluctant and stems from trauma rather than apathetic resignation.

The gap between the well fed (Viridiana, Jorge) and cultured and the beggars which Viridiana decides to take in, is so immense that the latter cannot even be at fault for their monstrosity and lack of appreciation exactly because the imbalance stems from a higher order than themselves: the establishment. The climax of the film is a transition from real to surreal, with a wild and sacrilegious feast and a final scene, which garnered the film its blasphemous status. 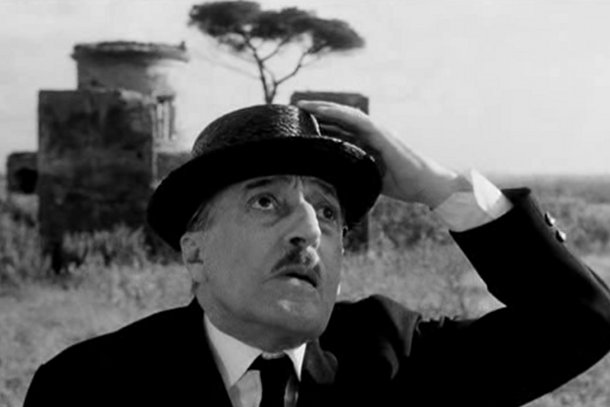 Hard to talk about an outstanding masterpiece when it comes to the work of Pasolini. His filmography entails Accatone, Mamma Roma, Oedipus Rex, Salo, The Gospel According to St. Mathew and that only concerns his directorial efforts.

Also the screenwriter of Fellini’s iconic Dolce Vita, the majority of Pasolini’s work is of immense magnitude. Hawks and the Sparrows however, is one of those that never reached mainstream cinematic consciousness, despite its abundant lyricism and excellent performances of iconic Italian comedian Toto and Ninneto Davoli. The Marxist and class struggle concerns in Hawks and the Sparrows give a sly indication about why and how the film gained its “lost in the cinematotheque”status.

Innocenti Toto and his son Innocenti Ninneto roam in the outskirts of Rome. Their journey becomes a spiritual one upon meeting a talking crow described as “a left wing intellectual of the kind found living before Palmiro Togliatti’s death”. The Crow tells of two Franciscan brothers who are to preach the Gospel to the Hawks and the Sparrows. After some laborious months, they manage to endow the commandment of love to the species separately but not among them.

Pasolini’s “Hawks and the Sparrows” has a certain poetic quality funded strongly upon its allegories which constitutes its deep and core political commentary more like a visual parable. The film is a classic example of Italian neorealist cinema, which deals with the lives and struggles of the working class. Its inventive and poetic outlook elevate it to the level of the more widely known and accredited films of Pasolini.

Alejandro Jodorowsky’s “Holy Mountain” is a cult classic, has been described as an “underground phenomenon”, “craziest and most encompassing film ever made” and many more. Nevertheless, it remains unknown to the masses and of the ones that are aware of its existence, few have taken the time to immerse themselves in Jodorowsky’s abstruse universe which should be decoded on the way to the Holy Mountain. Developed in the early 70s the film is heavily influenced by the time’s new age psychedelia and Jodorowsky’s personal infatuations with tarot, psychomagic, conspiracy theory and matters of stellar nature, from astronomy to astrology.

The film begins with a cloaked figure who strips two Marilyn- Monroe looking women ( Connie de la Morra and Leticia Robles) from their dresses and shaves their heads. This symbolic act, resembling to Bunuel’s slitting of the eye in the Andalusian Dog, prepares the viewer to strip of all preconception and knowledge, let the film and its symbols appeal and be interpreted by means of the unconscious.

Continuing, we are introduced to the protagonist of the film, a Jesus like figure ( Horacio Salinas), representing the tarot card of The Fool. Due to his similarity to Jesus, the locals form and sell impressions of his body. The man who is also identified as The Thief fatally encounters the alchemist and becomes his apprentice. The alchemist tells the thief that they will embark on a journey which will transform him from excrement to gold.

Seven people are introduced as the journey companions, each of them personifying a planet and the negative characteristics (in astrology) that are associated with it. Their trip entails a variety of transformation rituals and a journey to Lotus Island in order to gain the secret of immortality and ascend to The Holy Mountain.

The figure of the “Fool” is essentially representing the viewer. Drawing from cartomancy and esotericism Jodorwsky uses this figure, which symbolizes the young and naive man that sets of to unravel the mysteries of life.

For the Monty Python connoisseurs, The Holy Mountain could easily be paralleled with Life of Brian elder evil sibling. It is built upon a figure that resembles Jesus but is not and in different ways, both films expose the ambiguities of the path to salvation and mock the delusion of attaining it. The intricacies of the symbols and the occult references are not to make the film commendable by itself but to create the mystic atmosphere necessary for the fortification of The Holy Mountain.

What is commendable is that looking past its complexity and heavy use of agonizing symbolism it is simple, approachable and related to any conscious being. If you don’t let its lurking anti-capitalist agenda take away from it, you sure are to receive the essence of the film.

5. A Woman Under The Influence (1974, John Cassavetes, US)
Cinematographer: Mitch Breit, Al Ruban

Dialogue and action were precisely tailored but when it came to delivery, Cassavetes let his actors do the job without much instruction, giving them the freedom and responsibility of interpreting the character and embodying it according to their own perception of it.

Cassavetes is an intricate case of a film-maker who was well renowned and acclaimed but never had a break through. However, it is clear that he did leave a cinematic legacy-one that may be more influential than valuable itself- that contains a few jewels and the brightest one would have to be “A woman under the influence”.

Mabel ( Gena Rowlands) is a Los Angeles housewife happily married to a construction worker named Nick ( Peter Falk). Her strange mannerisms and erratic behavior has Nick concerned and he decides to commit her to an institution. After a six month treatment Mabel returns home however neither her nor her husband are prepared for the reunion of the family. Despite Nick’s and the extensive family’s honest efforts, Mabel’s psychological condition is so frail that every opportunity for rejoice disintegrates into a psychotic episode of extreme emotion and reactivity.