Aggelopoulos is another filmmaker with several outstanding pieces in his filmography. Choosing one and identifying it as his ultimate would be as difficult as trying to elect one out of the many in Pasolini’s, Kubrick’s or Hitchcock’s filmography. Notwithstanding the plethora of significant works, what established Aggelopoulos and earned him the Palm d’Or at Cannes Film Festival in 1998, is “Eternity and a Day”.

The third part of his “Boarders Trilogy” recounts the story of Alexander ( Bruno Graz) a once successful writer about to leave his apartment in Thessaloniki and enter the hospital, after finding out that he suffers a terminal illness. He goes around bidding his farewells and trying to find a new keeper for his dog. Experiencing heavy nostalgia, he keeps reminiscing of his late wife Anna (Isabelle Renauld).

Soon, Alexander meets and saves a seven-year-old Albanian immigrant who is being hunt down by the police. The boy and Alexander both serve each other: His precarious existence brings Alexander out of his self-pity and in return, he helps him find shelter.

The most compelling element in “Eternity and a day” is the absolute control of the frame, which characterizes Aggelopoulos as a director. Every frame is like a painting, there is absolute and complete precision in the way each figure and object is positioned within it.

Often referred to as a “poet of the screen” in “Eternity and a Day” the concepts of detachment and death, reminiscence of the important figures of one’s life and their absence and most prominently the search of the lost time, are explored by Aggelopoulos in this poetic manner achieved by means of the framing, the lighting and the majestic soundtrack.

The contrast to that is the performances, which are slightly de-dramatized and rather Swedish. Further triumphs of the film, entail the meritorious command of the greek language by protagonists Bruno Graz and Isabelle Renauld and the beautiful way in which Theo Aggelopoulos exposes the political and social situation of the time and subtly delivers his commentary. 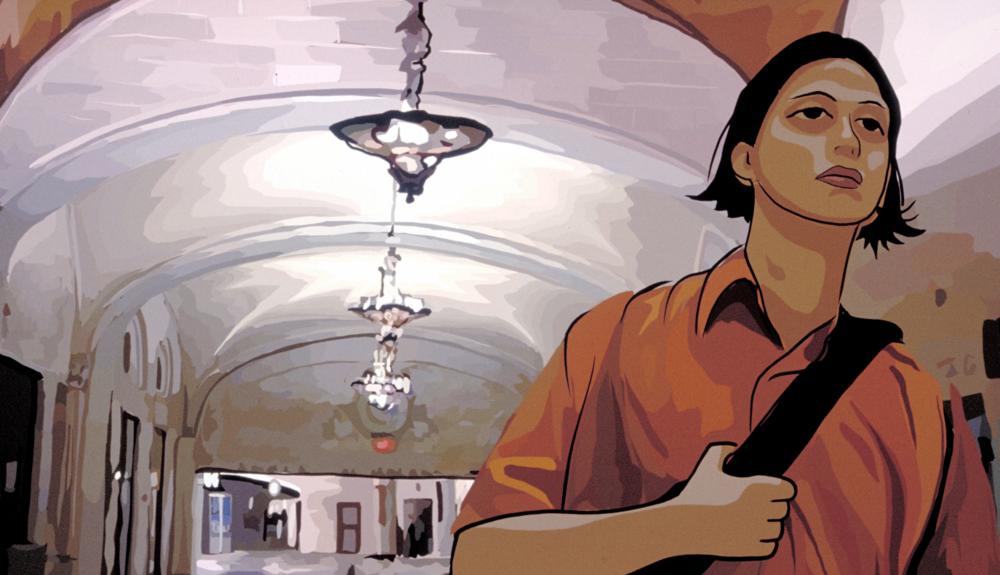 Richard Linklater has done so many different things and excelled in all. The “Before” trilogy with Ethan Hawke and July Delpy is his most acknowledged work, loved by both audiences and critics. Then there is “Dazed and Confused” one we all forget he actually made and more recently “Boyhood”. “Waking Life” however, is buried somewhere in his filmography, not having garnered the attention that is proportional to its quality.

“Waking Life” is a film one has to study. You can go back to it repeatedly, hold on to every sentence and analyze it for hours. Very few films are as thought provoking and keep this constant to the very end. One of its most brilliant qualities is how encompassing and successful it is in covering this breadth of ideas. It is beautiful and intriguing animation adds to it all while facilitating the visualization of its wild themes.

The “story” if one can speak of such, is based on a young man who is progressively heading toward an existential crisis. Throughout his dreams, he observes and participates in discussions involving a variety of characters. Those characters are scientists, musicians, artists or everyday people who engage with him in intelligible and multilayered conversation about metaphysics, the meaning of life & existence, free will, society, religion and political dead-ends.

Ana Lily Amirpour’s directorial debut was a massive success at least with the critics and the limited audience that it lured to the cinema. Box office wise, the film barely made 650,000 dollars, nevertheless it still slightly exceed in its very frugal budget that resulted from crowd funding. Especially taking into consideration the afore mentioned limited resources, the end product is stunning. The film is set in the US but all the characters speak Iranian and it is left to imagination whether Amirpour intended to create a strange situation of a rural America where everyone speaks Iranian or a make-pretend Iranian city in America.

“A Girl Walks Home Alone At Night” follows a strange, dark looking woman ( Shelia Vand) dressed in a chador. She seduces a drug- dealer pimp named Saeed ( Dominic Rains), who takes her back to his appartment. His advances meet fate as she is not the easy prey he assumed her to be. Later on she meets Arash ( Arash Marandi) a young boy who she resists harming and a romance develops.

Amirpour’s “A Girl Walks Home Alone At Night” creates a new and peculiar genre that has been descriped as “iranian feminist vampire western”. Forgiving a sly hipster element that sometimes errupts, the film is truly pioneering for multiple reasons, such as the incompatability of language and country and the tripartite nature the heroine.

The conception of a female vigilante and self – appointed defender of women echoes of Amirpour’s dynamism and beyond its conceptual and thematic success, “A Girl Walks Home Alone At Night” is visually appealing in all ways possible.

Even though Amirpour isn’t particularly innovative with her camera, her meticulous framing choices and scenery production is so wonderfull that makes the film eye candy material, despite it being black and white. Almost flawless while maintaining effortless feels, “A Girl Walks Home Alone At Night” is so sensational and defining that it deserves your time.

Not that “Love exposure” is a very unknown film. Not that Sion Sono doesn’t have an international reputation garnered by his rich and magnificent filmography including Suicide Club ( 2001) and Norkiko’s Dinner ( 2005). You may be aware of its existence; you may have been submersed in true temptation but you probably haven’t sat for the unsitable.

With that said, Love Exposure has a monstrous length of 237 minutes, which is not even the full length but that of the theatrical release. And those –almost- four hours of film have their fair moments of disturbia, violence and awkwardness because Sion Sono is doing himself justice.

Yu Honda (Takashiro Nishijima) is a devout catholic teenager, living with his even more devout catholic priest father ( Atsuro Watabe). Yu lives carefree teenage life free of sin but his father insists on trying to make him confess. This way Yu becomes sinner by suggestion and actually starts taking pictures of girls panties for the sole purpose of having something confession worthy for his father.

In the meantime a girl named Aya ( Sakura Ando) becomes infatuated with Yu after she catches him taking a picture of her panties. Aya is a member of a cult named “Zero Church” and is planning to bring Yu and his family in the cult.

Saving the melodrama, Love exposure has a bewildering darkness reflected in and derived by its troubled characters and their obsessive and unhealthy relation to faith. Despite the somber and ominous elements of the film which are abundant, the story is essentially a typical amalgam of deprivation and tenderness. A deep understanding of and identification with the characters is only natural since one gets to spend almost four hours with them.

Love exposure –whilst violating Hitchcock’s law of a film’s length having to be directly related to the endurance of the human bladder- is an immensely beautiful film that stays sincere to all its themes, from religion to family, lust & love. Additionally, it contains noteworthy performances including an epic and excruciating scene where Hikari Mitsusima ( Yoko) recites Corinthian’s 13.

“Hard to be a God” is almost unwatchable. Going through 177 minutes of bizarre cinematic oddity shall be a challenge even for the brave hearted. Every frame is more grotesque than the previous one, the dialogue is so apart that the essence of the necessity of language is lost, the characters are barbaric and brutish and the length of it all makes for a soul wrenching experience.

The depravity and primal state of existence that takes place is unprecedented and does not resemble anything, except for maybe eliciting a medieval kind of vibe. The narration does not facilitate interpretation greatly either and as it has been pointed by many whether one watches the film with subtitles or not does not make much difference in terms of understanding.

Aleksei German died the same year that the film was released, earning himself some posthumous fame with his grotesque masterpiece, which is far from an audience favorite, however, it has gained wide critical acclaim and rightfully so. The construction of the universe of “Hard to be a God” has such strong foundations and remains solid and truthful to such an extent that it even ends up being beautiful.

At the same time, the barbaric state of affairs presented in the film is not a self-purpose, a mere attempt to shock but it actually echoes a satirical outlook and prankly criticism on Russian backwardness, similar to that of the novel of the same name by the Stugatsky brothers.

A group of scientists travels from earth to Noon Universe and planet Arkanar, a planet with identical biosphere to that of the earth, habituated by humans who are culturally and technologically centuries behind. Anyone that was considered an intellectual has been murdered and therefore the planet is stuck in development, somewhere in middle ages according to earthly standards. Anton, a scientist from earth, is sent to help the local population develop as a society.