How quickly can you distinguish a classic from a curiosity? Genuine taste is revealed not through its second-hand worship of established works of art, but by its ability to discern the timeless qualities in both the new and the vintage. Curiosities and classics present themselves side by side in the art market, and a savvy consumer must constantly practice critical thinking.

The difference is partly one of free will. A curiosity cries out for attention – promising something new and different, but often leaving us feeling swindled in the end. A classic needs not make such pretenses, but confidently offers its substance as compensation for our volunteered time and attention.

The difference is also one of longevity, which necessarily takes time to emerge; even the sharpest eye may sometimes mistake a flash in the pan for a durable work of art. Some masterpieces reveal themselves as such when we find ourselves revisiting them over the years, finding each experience to be a fresh one.

Perennial favorites like this can make us feel at home with their realism, or transport us across years and universes through escapism. We love some movies for their rich complexity, and others for their disarming simplicity. Each individual’s list of masterpieces to watch again and again is obviously unique and deeply personal, but sharing our selections is a simple way to better know our neighbors while expanding our own horizons.

This 1937 movie is one that the darker times of the 20th century were unkind to, and which we’re lucky to have access to today. Famously picked by Orson Welles as the one film he would save from destruction if forced to choose, La Grande Illusion thankfully had other guardian angels throughout the years.

It was originally branded as “Cinematic Public Enemy Number 1” by Nazi Propaganda Minister Joseph Goebbels, who tried to have every copy of it destroyed. It was even banned in its home country of France during World War II for fear it would damage public morale.

So what exactly was its corrupting, scandalous message? Essentially that the differences which separate humans and cause them to wage war and kill are illusory and false. Director Jean Renoir sets his story during World War I, primarily in a German prisoner of war camp where some French soldiers have been assigned.

The key and unforgettable relationship is between a French and German officer – both are gentlemen who now find themselves in the roles of prisoner and warden. The bond they discover is one of common humanity and decency which is constantly strained and torn by their professional war duties. With one under a sworn obligation to constantly attempt escape and the other under oath to stop escape by any means necessary, can their relationship possible survive?

La Grande Illusion is fundamentally timeless because the world never finds itself without war and conflict raging. Likewise, within any mass dispute can be found many individual humans who would find it far harder to hate and kill a person on the other side if they had some understanding of their similarities. As a profound reminder of the common humanity which exposes the folly of war, La Grande Illusion will always be a classic worth watching again and again.

Not many movies have so effectively blended multiple genres into one coherent film as North by Northwest. Director Alfred Hitchcock successfully juggles romance, comedy, melodrama, and action in this thriller about mistaken identity and wrongful accusation. When the United Nations headquarters and the edge of Mount Rushmore are the sites of two climactic scenes, you know you’re in for a film with big ambitions.

As unforgettable as the story is the cast that plays it. Cary Grant was never more fun to watch, and he is given ample room to let his talents shine – as a leading man, as a comedian, and even as an action star. Eva Marie Saint is as enigmatic and mysterious as we’ve ever seen her, always staying one step ahead of the protagonist and the audience. Add the always cool, smooth-talking James Mason as the antagonist to Grant, and you have a casting recipe that can’t go wrong.

Because this film has so much going on without being chaotic, it feels fresh no matter how many times it’s revisited. With each member of the cast at their peak of skill, it’s a rare and perfect combination of talent that works magically. All of these things make North by Northwest one of those movies that always seems to spring to mind when you’re in the mood for a great evening of entertainment. 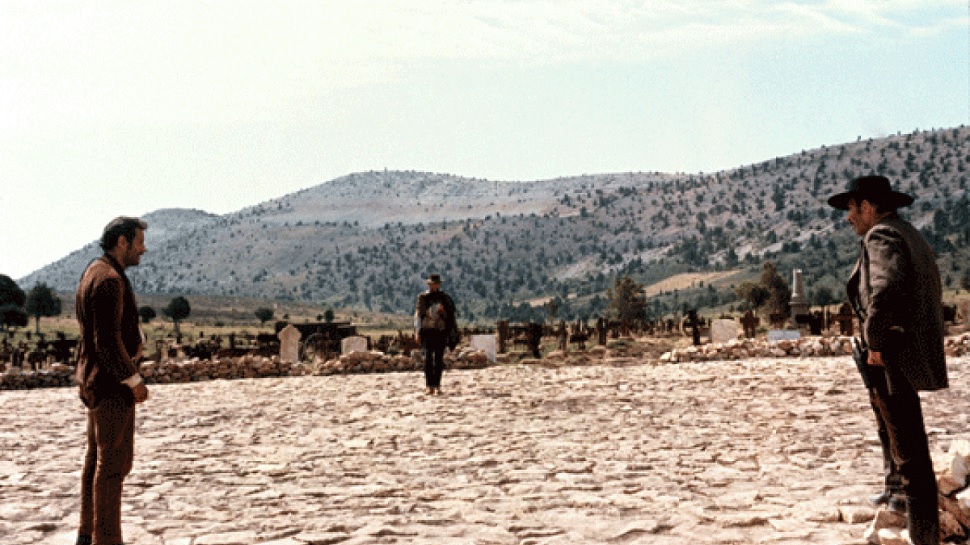 Who could have predicted that a nameless character would become one of cinema’s most iconic protagonists? And yet, Clint Eastwood’s steely gaze and stoic persona were enough to create just that (along with some excellent script writing, of course). The title of this film identifies its main characters and also brands their personalities – moral, immoral, and amoral. Clint Eastwood, Lee Van Cleef, and Eli Wallach fill these shoes wonderfully, and this starkly drawn, spare cast is the constant focus of the story.

The soundtrack of The Good, the Bad and the Ugly is nearly worshipped, and rightly so. Its familiar strains clear the air of the film like a meditation bell calling for our attention, and we respond reflexively to its sound throughout. The aural equivalent of a painting of vast wasteland, the music consistently intensifies the mood of the movie without distracting from it.

The intertwining storylines of the three main characters all build to one of the greatest climaxes in cinematic history. Even if the entire film were not as entertaining as it is, just knowing that the big showdown is coming would be enough to make us eagerly enjoy the journey. This is a certified classic that never feels stale, and whose popularity is sure to have no expiration date.

4. Eyes Without a Face

This horrific gothic tale is a moody masterpiece with an unforgettable story. It features a brilliantly mad doctor whose experiments have unsurprisingly led him into morally questionable territory, with a bit of a twist – his main subject is his daughter.

Eyes Without a Face takes a look at the well-intentioned but ultimately superficial motives of the doctor and their effects on his daughter, who begins to feel that she is valued less as his child than as his experimental subject. It’s a beautifully made film, treating its horrific topic with elegance. The atmosphere is as surreal and dreamlike as the life of the poor girl must feel to her. With its poetic artistry and escapist flourishes, it’s the kind of movie that welcomes regular revisits.

Robert Bresson’s A Man Escaped is one of the greatest prison break movies of all time. It’s based on the memoirs of real-life soldier André Devigny who was imprisoned as a member of the French Resistance during World War II.

The first part of the movie’s title openly gives away its plot, but the viewer’s foreknowledge of the eventual escape makes the complications involved no less suspenseful. The second part of the title, drawn from a passage from the Bible, hints at a spiritual freedom to be discovered by the protagonist en route his physical escape; without being explicitly discussed, this adds an extra layer of complexity to the character’s journey.

One of the film’s most fascinating traits is its juxtaposition of the complexity of the escape plan with the simplicity of the film’s delivery. The plainness of Bresson’s style feels like a perfect cover for the secret escape plan – it’s as anonymous as the covert glance of the non-professional actor playing the prisoner.

Choral selections from Mozart’s Great Mass in C Minor are used to great effect here, as the director gives a masterclass in creating an atmosphere of suspense without using any cheap tricks. This movie is as tense throughout as it is uplifting in the end, and you’ll never grow tired of re-discovering exactly how a man escaped.