It’s no secret that some movies have had controversy surrounding them since the day they were released, and the main culprits are horror movies. For decades, creators of horror have tried to out-do each other on gore, jump-scares and generally getting in to viewer’s heads, and many have been accused of more.

From vomiting and fainting in the cinema to miscarriages and more, horror movies have a lot to answer for. Upon hearing the stories of people that have seen them, many would just disregard the idea of watching them altogether, or do so with caution and near a toilet. Of course, it’s very difficult to write about something that hasn’t had your full attention… which brings us here. To a list of horrors that have a bit of a reputation for themselves. Need I say spoiler alert?

The scene in question – The main character skins her hand to get out of handcuffs.

The accusation – Caused people to faint.

Gerald’s Game is a recent psychological horror that really tries to play with the mind. When we think of Stephen King with think of jump-scares, creepy things in the night and blood, and if you go in with that mindset you’re in for a bit of a disappointment.

Starting out as a loving, well-intentioned, romantic getaway to refuel the fire in their sex life, Gerald and Jessie arrive at their destination. No neighbours, no workers, no distractions. This quickly turns into a game that Jessie doesn’t want to play, and disturbing childhood memories come flooding back. Being handcuffed to the bed in an attempted sexy manner, there isn’t much she can do when her husband suddenly dies of a heart attack. It’s suggested that this is a result of the over-use of .

It’s not long before Jessie starts hallucinating, It isn’t entirely confirmed which parts were hallucinations and which parts aren’t – but seeing a dog eating your dead husband is bound to do something to the mind. We’re then caught in almost a montage of wildly inappropriate things involving her father, a discussion with versions of herself and Gerald and a creepy man who seems to collect shiny things from dead people.

It really is do or die and prompted by a memory, Jessie reaches for a glass and smashes it, rolling the broken shards around in her hand until it’s both lubricated and shredded enough to scrape through the handcuffs, practically skinning her hand on the way through.

This scene was gruesome enough to have some viewers fainting in their seats. However, if you watch it expecting something really horrific, you’ll probably do little more than wince.

The scene in question – When the ‘freaks’ ambush the bad guy.

The accusation – Caused a woman to miscarry.

It’s hard to say with this film whether or not it’s worthy of its reputation, because the original no longer exists. It had to make major cuts, resulting in the re-release being a little over an hour long. Harrison’s Reports reported on the topic, stating that “anyone who considers this entertainment should be placed in a pathological ward”.

The first thing that will catch your eye is how different the Metro-Goldwyn-Mayer (MGM) opening was in 1932. It really sets the tone for watching an ‘old movie’ so if you’re smart you won’t go in with any expectations – good or bad. For its time, Freaks was one of the most disconcerting things that anyone had ever seen and with the resources they had they did well.

Aside from the first and last scenes, the entire movie is a flashback. Watching this can be a struggle as for the first 15 minutes or so, the scenes are quite jumpy and really lack context; but once you’ve figured the story out it’s an easy ride. The setting is a travelling freak show – trailers and arenas and the likes of – that also showcases some people without disfigurements or ailments, such as beautiful dancer Cleopatra, and strongman Hercules, our antagonists.

Cleopatra, the bold and gorgeous ‘big lady’ finds out that Hans, who has dwarfism, has come into a fortune. She lures Hans away from his lovely wife, and plots with Hercules to kill him and run off into the sunset together. It really looks like she’s in for a win!

Over the course of the story you get to know some of the ‘freaks’ and aspects of their lives, a key fact being that they always stick together and don’t appreciate being laughed at. This all becomes apparent at Cleo and Hans’ wedding dinner when she poisons Hans and kisses Hercules. By nursing him back to health and being the model wife, it seems as though she’s gained Hans’ trust once more and is slowly poisoning him with medicine.

Intertwined with a secondary plot, everything comes to a head with fights in a storm, and Hans and his ‘freak’ friends ambushing Cleo and Hercules. We see Cleopatra chased into a forest and subsequently a slow, intimidating, drawn out scene of people with exaggerated disfigurements closing in on Hercules looking rather intent on harming him – and since one of them has already stabbed him, the option to run is off the cards. This partnered with some intense music could really make for a shocker in 1932.

The scene in question – The movie as a whole.

The accusation – Caused a lot of vomiting.

It’s easy to see how this movie kicked up such a stink in the entertainment world. It’s described as a ‘Hungarian-Austrian surrealist comedy-drama horror film’, which is a mouthful before we’ve even started watching. This is a visually creative, well thought-out yet very disturbing piece of cinema that spans three generations of men who clearly have some issues.

It begins with the life of an obese man, who seems to spend a lot of his time having perverted thoughts about inappropriate people, despite being married with two teenage daughters. If that wasn’t concerning enough, cut to a scene whereby the Lieutenant’s wife has propositioned him on top of a pig carcass. The entire escapade was a hallucination and we see that he was, in fact, defiling a dead pig. The lieutenant then blows his brains out, but the wife gives birth to an odd pig-human. His tail is chopped off, and he is raised as their own.

30 years later the baby has become a professional speed-eater and competes internationally. It’s clear that Kàlmàn and another man share a love interest, however whist shovelling a gelatinous glob and various animal parts into his mouth he suffers a heart attack. In the hospital his love interest, Gizi, and rival are hitting it off whilst comforting Kàlmàn after his health scare. Instead of being bothered by this he remains poker-faced. Gizi leans over the hospital bed to embrace the other man, and a drop of sweat falls from her hairy armpit onto Kàlmàn’s face. He quickly licks it off.

After an encounter in front of Gizi’s now husband, her and Kàlmàn decide to be together. She falls pregnant but continues speed-eating competitively. She passes out in her dinner and that’s the last we see of her.

Again, 30 years later and Kàlmàn clearly resents his son for his mother, for being skinny and for his chosen profession – embalming. After yet another big fight between Lajoska and Kàlmàn, the door to Lajoska’s pet’s cage is left open. His pets are large, vicious cats and by the time he gets home they have killed his father and eaten his stomach. Lajoska gets to work, stuffing Kàlmàn with straw before using an intricate contraption to remove his own organs and finally, decapitate his head and limbs from his torso.

At the end of the movie, we see Kàlmàn and Lajoska in a museum of art. The whole thing is pretty raw, and if you haven’t got a strong stomach you might want to skip this one.

The scene in question – The shotgun murder scene.

William Lustig created a lot of controversy with Maniac, mainly surrounding the violence towards women. It was deemed ‘unimaginative’ and ‘unnecessary’, but in order to portray the character’s mental issues it was a key part of the story. Oddly enough, it isn’t the violence towards women that brought this movie to the list, but a rare occasion in which a man is murdered.

Right from the off, Maniac is creepy. There’s constant heavy breathing and you can almost hear the sweat dripping from the pores of this clearly disturbed man – in the first few scenes we can see that he has a shrine in his room surrounding a photo of a woman which we will later learn is his mother.

It doesn’t leave you hanging for longer than five minutes before the first kill, but as the film goes on you begin to understand how this man’s twisted mind led him here, and that makes the unsightly killings just a little bit more horrific. Throughout the picture, Frank Zito follows, tortures, murders and scalps women and pins the scalps to mannequins which he talks to – his problems have grown from his mother being a prostitute, and he thinks that all women need to be stopped.

Unlike most other horror movies, our killer doesn’t seem to have a preferred method. There’s cheese wire, guns, knives and bare hands and each murder takes its own form other than the scalping. Sometimes it seems as though he’s enjoying it, other times he vomits and cries.

The scene that brings us here is possibly the most fantastic shotgun-to-the-head scene in the history of cinema. A couple are getting a little frisky pulled over at a rest stop when the woman sees something out of the corner of her eye. She instantly wants to leave, but the man’s persistence means that when he finally agrees, they’re too late. Zito jumps on to the hood of the car, points a shotgun at the man’s head and shoots. All in slow motion, and pulled off incredibly realistically.

As it turns out, the guy that gets his head blown off is actually the man who created all of the special effects for the movie, Rendering it all the more iconic!

The accusation – Caused viewers to faint. 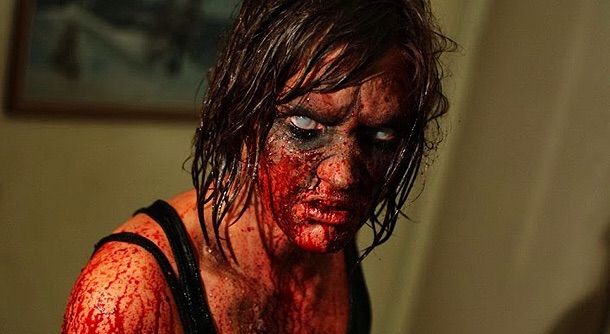 Thanatomorphose is the French word for “visible signs of an organism’s decomposition caused by death”. The movie is incredibly serious and solemn, involving very little dialogue and eroticizing sadness and gore. The tone is set by expression and surroundings, as the entire picture is set in one small apartment.

A young woman in an abusive relationship puts her unidentified bruises down to her violent boyfriend, and thinks little more of them after discovering their existence until they start to spread. Not long after, her hair begins to fall out and you can tell that her concern is growing.

Over time her condition worsens and, instead of doing the normal thing, she begins to document it – preserving parts of her that fall off and photographing new marks, legions or bruises on her body. Throughout the movie we see more and more bodily fluids leaking and an array of body parts falling out – all filmed graphically and close-up.

The movie closes with the photographs documenting the deposition and leaves a lingering bleakness. Whilst it could certainly put a downer on things, artistically speaking Thanatomorphose is a masterpiece, however grim and dissociative it may be.