During the promotional tour of Hot Fuzz and whilst The World’s End was in production, one of the interviewers pointed out to director Edgar Wright that he had made use of a Cornetto ice cream in both Shaun of the Dead and Hot Fuzz.

The trilogy consists of Shaun of the Dead, Hot Fuzz, and The World’s End. Each film in the trilogy is connected to a different flavoured Cornetto which also appears in each relevant film. Shaun of the Dead features a strawberry flavoured Cornetto. This signifies the film’s blood, gore and horror elements. Hot Fuzz includes a blue original Cornetto. This represents the Police element of the film.

Finally, The World’s End features the green mint chocolate chip flavour which represents the ‘little green men’ and sci-fi element. Wright has since said that Walls (the manufacturer of Cornetto) love the films and namecheck.

The Cornetto trilogy has been very popular with audiences. Wright has said that he thinks this may be due to the ‘Trojan horse’ aspect of the trilogy. Each film masquerades as a certain genre but also features other genres which aren’t obvious at first. For example, Shaun of the Dead is a horror but it is also a relationship comedy.

This British sci-fi comedy horror film was written and directed by Joe Cornish. It was the directorial debut of Cornish. It was also the debut film for actor John Boyega. It centres on a teenage gang who are forced to defend themselves, and their council estate neighbourhood from malevolent alien invaders.

The film made £4.1 million at the box office against a budget of £8 million. Although it underperformed at the box office, the film was well received with favourable reviews and won awards internationally.

Edgar Wright was a producer on this film which was directed by Cornish, who is his friend and sometime collaborator (they co-wrote Ant-Man together). Attack the Block also features Cornetto trilogy star Nick Frost. Cornish used mostly unknown actors from the local area to depict the teenagers in the film and as such Attack the Block was the film debut for many of the cast.

Attack the Block is another film, much like those of the Cornetto trilogy, which successfully combines genres to provide laughs and action with a distinctively British feel. With Wright as a producer, it feels as though Attack the Block has definitely benefited from his influence. 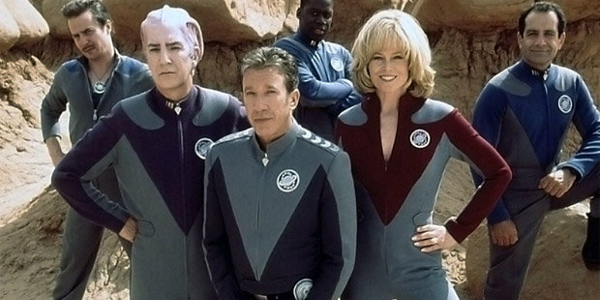 A parody of sci-fi films, in particular Star Trek and its fandom, Galaxy Quest follows the cast of a defunct cult 70’s television series called Galaxy Quest. The stars are scraping a living through re-runs and convention appearances, when one day they are beamed onto a real life alien spaceship. The aliens, who believe that the on-screen adventures of the crew are historical documents; turn to the cast for help in their quest to solve the intergalactic conflict in their solar system.

The film was directed by Dean Parisot and written by David Howard and Robert Gordon, and was a moderate box office success making $90 million against its $45 million budget. It was well received critically and won several awards. Over the years it has gained cult status from fans.

The Cornetto trilogy makes frequent use of satire and parody to produce films that audiences not only find entertaining but are also able to find much that they can relate to and recognise. Galaxy Quest is in much the same vein as this, using satire and parody to provide its audience with a highly watchable film and as with the Cornetto trilogy films – Galaxy Quest is also boosted by great performances from a perfectly cast ensemble.

This British satirical dark comedy film was written and directed by Chris Morris in his directorial debut. It follows a group of young radicalised Muslim men who aspire to be suicide bombers.

After a brief but unsuccessful run at a Pakistani training camp and an inept plan to train birds to carry bombs, the group decide to conceive a plan that will culminate in them bombing the London Marathon. The film was a moderate box office success, performing best in the U.K and was praised critically.

Four Lions is another film that uses satire and parody in a highly effective way. In the case of Four Lions, this time the satire has a palpable British feel to it. The dark comedy may not be to everyone’s taste, but Four Lions is a whip smart comedy that turns fanaticism on its head and invites you to laugh at its absurdity. And thanks to a brilliant script and hilarious characters, Four Lions is another British comedy that is a great companion piece to the Cornetto trilogy. 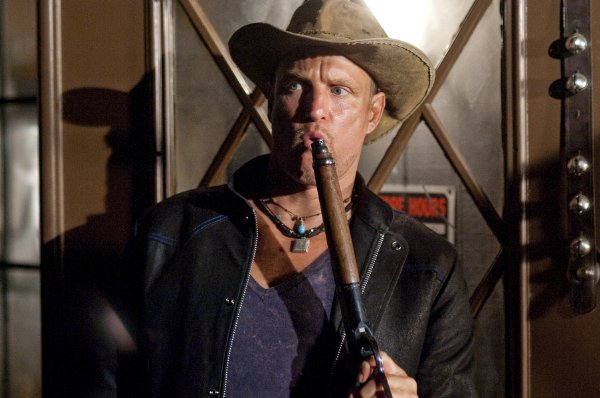 The film was directed by Ruben Fleischer and written by Rhett Reese and Paul Wernick. It was a financial and critical success, receiving positive reviews and making more than $100 million against a $24 million budget.

Shaun of the Dead was able to take a core aspect of the horror genre, in this case zombies, and turn it on its head in a highly comedic way which also felt inherently British. Zombieland does the same with the zombie genre, but this time the action, dialogue and setting is American.

The witty banter between the characters, the film’s use of popular culture, and the playful and fun tone of the film make it feel reminiscent of Shaun of the Dead and fans of the Cornetto trilogy should definitely check out Zombieland’s take on the genre.

Sightseers is a British horror comedy film directed by Ben Wheatley. It was written by Alice Lowe and Steve Oram who also star in the film. The film follows couple Chris and Tina. Chris wants to show Tina his world and he wants to do it his way – on a caravan trip through the British Isles. But when things start to go wrong threatening to derail the trip, Chris’s dreams begin to shatter around him and the idyllic trip soon turns into a much more disturbing one. The film performed moderately well both critically and financially, and received a number of award nominations.

Sightseers was originally a short and it was this short that got the attention of Wright, who saw its potential as a feature film. Sightseers makes use of the same sort of gruesome and clever humour as the Cornetto trilogy and as a result it is a film that fans will appreciate.

308
SHARES
FacebookTwitterSubscribe
Subscribe via Email or RSS Feed
Pages: 1 2
Comments (5)
Great Movies To Watch If You Liked The Cornetto Trilogy