This entry in particular will be much shorter than the others but Man Bites Dog (Or as it’s known by its original French title C’est Arrivé Près de Chez Vous, which translates to “It Has Happened Near your Home”) is an incredibly dark mockumentary designed almost seemingly to be a fake snuff film that reassures the audience that everything is fictional while still being just as morally repugnant. Yet Man Bites Dog can be considered the opposite approach of how A Clockwork Orange was executed as a film.

Whereas A Clockwork Orange was a flashing, captivating spectacle set in a future dystopia, Man Bites Dog is a fascinating, nasty, and terrifying up-close look at the daily life of a psychopath serial killer, aptly named Ben, that is set in a subtly pragmatic yet sometimes hyperbolically insane reality.

There isn’t much that can be said about story regarding this film, considering its small budget. But one thing is for certain: Man Bites Dog is as confrontational as its title itself. It’ll metaphorically grab you with its jaws and thrust you into its one-of-a-kind atrocious but fundamentally thoughtful experience.

Natural Born Killers is best-described as a self-aware middle finger to the senses. And oh boy, what a joy ride of a film this one is, the word “joy” being used very loosely here. The film is a lively and thrashing criticism of the cultural sensationalism associated with horrific deeds that were heavily covered throughout the 1990s. Whether it be the 1991 confession of Jeffrey Dahmer or the mass-media “crime-drama” circus that was the OJ Simpson trial in 1994, it was plainly evident that America had reach a pinnacle hunger for scandalous stories involving outlaws and serial killers (That, by the way, still hasn’t shown any signs of stopping).

Even you, the reader of this list, are probably fascinated with criminals as story archetypes, if you haven’t yet stopped reading his list. But whether or not you love these sort of films as wish-fulfillment power fantasies or think pieces on your own morality, Natural Born Killers is, purposely, an extremely convoluted yet jolting mess concerning these two polar perspectives.

On the one hand, unsurprisingly considering the script was written by Quentin “Pulp Fiction” Tarantino, the film revels in and glamorizes its senseless violence as if it were a technicolor drug trip. Yet on the other hand, the film was directed by Oliver “JFK” Stone, whose films, in this day and age, seem less politically thoughtful then they seemed upon their original releases (especially the drawn-out, historically-inaccurate, and paranoid wet dream that is JFK).

Yet Natural Born Killers is a huge exception to the sort of expectations associated with his films and no matter how you end up feeling about the film, you naturally won’t want to miss out on this killer flick.

So, you may be wondering upon first glance at this entry: what does David Fincher’s sleek flick about a bunch of grimy men on the edge of sanity and reason and an ironically elegant coming-of-age film, starring Melanie Lynskey and Kate Winslet as leads, have in common? For Heavenly Creatures is yet another precise thematic contradiction to appear on this list, both in name and story.

Directed by Peter Jackson and released seven years before the release of his break-out film Lord of the Rings: The Fellowship of the Ring, Heavenly Creatures is sharp and well-defined. And even more credit, for the movie’s outer grandeur, is due to the film’s co-writer Fran Walsh (who would go on to work with Peter Jackson as a co-writer on all of the LOTR trilogy films and share a Academy Award for Best Screenplay) and cinematographer Alun Bollinger (who’d serve as a Director of Photography on all three films of LOTR as well).

The film itself is utterly whimsical and “heavenly” in its detailing of a blooming friendship and eventual, obsessive romance between fourteen-year old Pauline Parker (Melanie Lynskey) and fifteen-year old Juliet Hulme (Kate Winslet). Yet if you know the outcome of the true story it was based off in the first place, it makes the viewing experience all the more tense. And even in the beginning, you are slightly hinted at what the film will become: tragic, emotionally claustrophobic, and masterful. 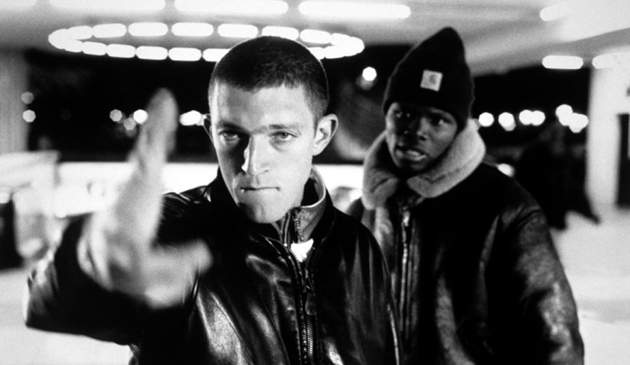 La Haine (or, as it goes by its alternative blunt English title, “The Hate”) is a film that can be boldly defined as being even more poignant and socially-relevant than Fight Club.

It is a visual blow to the spinal cord and you’ll never get a greater onslaught of dopamine than when you see this film for the first time. Especially if you’re addicted to gorgeous black-and-white in-your-face cinematography, the rebellious aesthetic, and tight pacing.

Tick tick tick. Run Lola Run comes at you hard like a bullet yet as subtle as a feather. For in this film, time steadily marches forward like an arrow and it demands your precise attention at all times while also rewarding you by providing you an incredibly exhilarating viewing experience. The film’s message is about how our small decisive actions can change and influence people’s lives in a infinite amount of ways. It even states this right away in a very visually-particular manner by showing a crowd of hundreds of digitally-rendered people that make up the letters of the film’s German title “Rennt Lola Rennt”.

Like this crowd of people or gears and sprockets in a watch, all the intricate scenes in the film are vital to its success as a smooth, hyper-stylized, and quickly-paced narrative. Every interaction, every characters, and every minute is something worth paying attention to.

Despite being made on a small budget of $1.75 million dollars, the film became a major financial success, grossing $22.9 million dollars worldwide. There have been TV shows that have full-length episodes referencing the film such as the 2001 “Trilogy of Error” episode of The Simpsons and Phineas and Ferb’s “Run Candace Run”. And although Run Lola Run has no obvious plot points that can be compared to Fight Club, they are both high-class sleek, smooth presentations of the mundane yet intense lives of the down-and-dirty.

Author Bio: Ian is a wannabe writer and consistently vigorous devotee to films, comics, manga, television, literature and sometimes video games. He has no idea where he’s going but he’s trying!