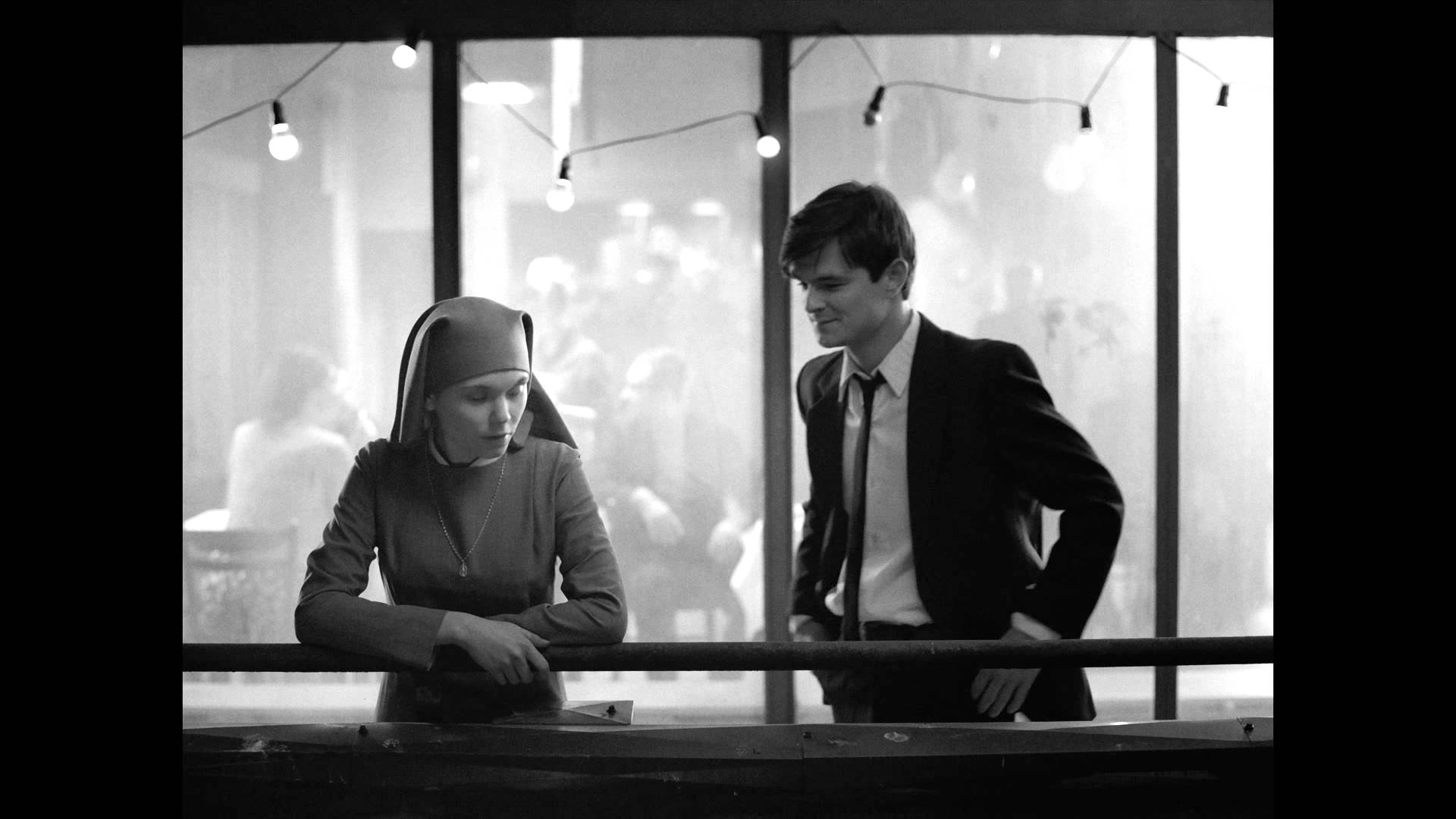 The golden age of Polish film is often connected with the period of peak achievements of most famous directors in Polish film school in the 50s and 60s – Wajda, Munk, Kawalerowicz, Has, Konwicki – or with the “cinema of moral anxiety” that occurred in the 70s and early 80s with Zanussi and Kieślowski.

The year 2014 brought the cycle “Martin Scorsese Presents: Masterpieces of Polish Cinema”, gathering 21 films selected by Scorsese, who is an enthusiast of Polish film classics. This cycle contributed to the increasing international popularity of Polish classic film art, but it consisted only of films released between 1957 and 1988. Even despite the 2013 Oscar for “Ida”, contemporary cinema from Poland still remains relatively unknown worldwide.

The cause could be connected with obvious decline of artistry (not only in the film industry) in the 90s after the political transformation at the end of the communist era. It was a time, after the years of closure, when mass entertainment from the West suddenly became widely available in a country. Therefore, many local films from that period were simply a cheap imitation of American action films, or tawdry dramas in the style of soap operas.

Of course, there were exceptions, but generally films from that time couldn’t be compared with films from the golden period. The situation slowly started to improve in the beginning of the 21st century and in the last 16 years, a lot of remarkable and often underrated movies have been made. This list presents 25 of them. 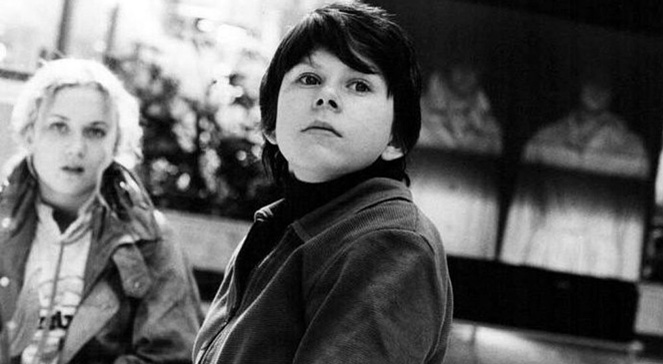 With almost a documentary look, Robert Gliński analyzes the depressing reality of poor, urban neighborhoods with the example of Tessa, a talented teenage girl who wants to be a fashion designer. However, under the destructive influence of a depraved environment, she radically changes her behavior and squanders a chance to break away from her sad reality.

To make this film as credible as possible, the director didn’t hire a lot of professionals. None of the kids here are (or ever were) actors – they were truly from this environment. Therefore, a lot of scenes were improvised by them to reflect the naturalness of their conversations. All the audio and visual aspects are also very raw – the cinematography is black and white and the film almost completely lacks music.

The history of Aleksandra Gietner, who played the main character, is equally tragic as the history of Tessa. After being noticed in this role, she had a chance to visit Hollywood to receive the prestigious Young Artist Award, but instead she came into serious conflicts with the law. As of today, she has received a few sentences and has had numerous attempts to escape from a youth detention center. 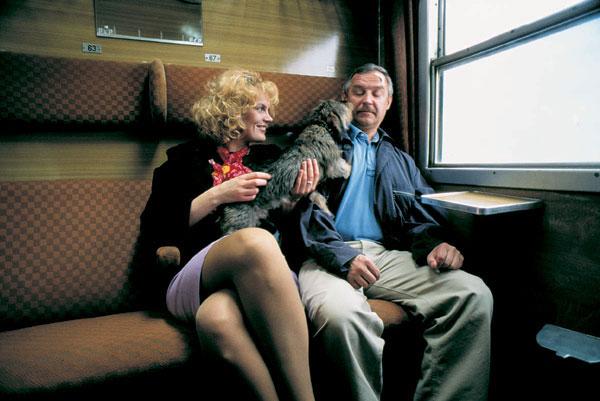 “I’m afraid to wake up, I’m afraid of the day, every morning I’m afraid to open my eyes because of the fear of the dawn, I don’t know completely what should I do with the upcoming day.” Adaś Miauczyński (Marek Kondrat), the main character of most Marek Koterski’s films, is a frustrated and neurotic high school teacher stuck in an unhappy marriage, without any perspective to change his life and with a bunch of pointless rituals defining his daily routine.

However, the depressing, moving, and yet very authentic portrait of a middle-aged man, who’s deeply dissatisfied and disappointed with his adult life, is not the only thing that makes this film great. It’s also the huge amount of black humor, surreal elements, and the language; typical for Koterski, it is full of repetitions and neologisms with a unique syntax and deliberate grammar mistakes.

Many quotes from this film are now part of the everyday language in Poland, and the outstanding performance from Kondrat is considered to be one of the best in Polish contemporary cinema. 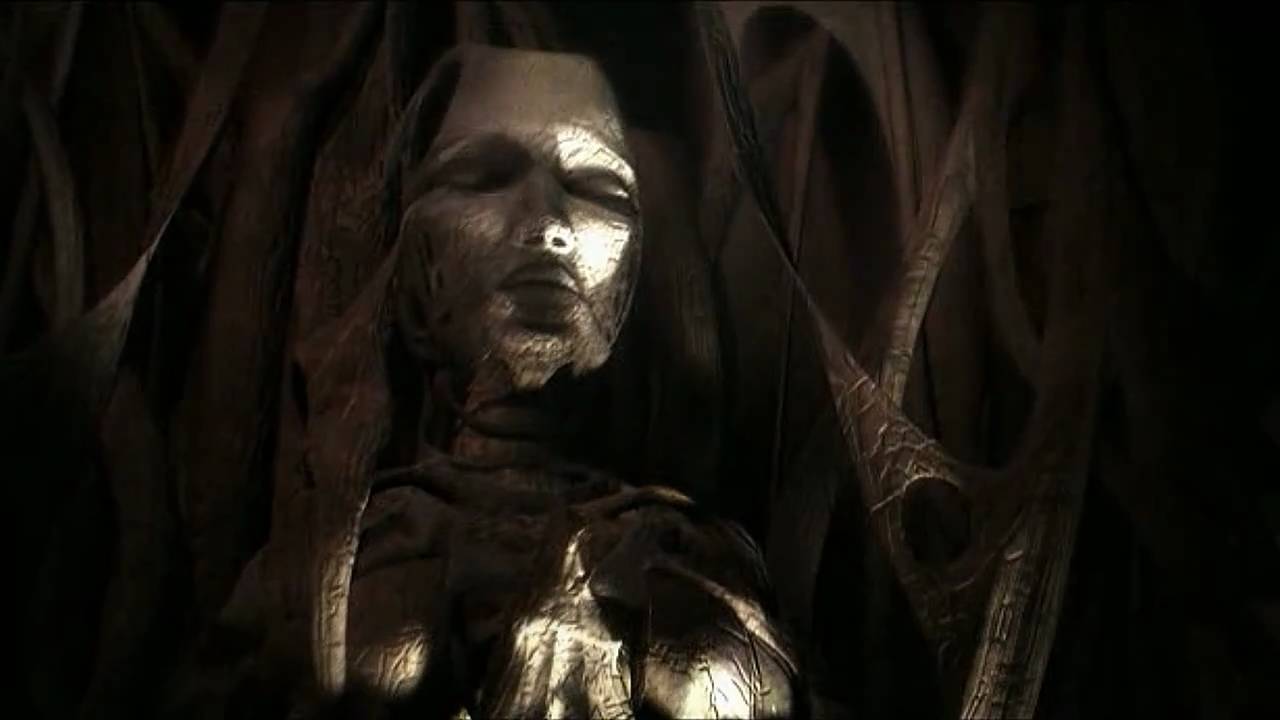 Inspired directly by Jacek Dukaj’s short novel and indirectly by the paintings of Zdzisław Beksiński, Tomasz Bagiński, the master of computer animation, made a film that lasts only seven minutes, but from the very beginning until the very end, was a product of nothing but his own work.

Created in 3ds Max, it excites with stunning visuals. The story, set in a sort of post-apocalyptic world, is intriguing and hard to interpret, even after watching it few times. The effort that Bagiński had to put into this piece of art is unimaginable, considering the fact that he was the only one responsible for making the animation (he admitted that it took him more than three years). He was rewarded with well-deserved Oscar nomination and positive international acclaim.

Even if today it looks more like an intro to a video game and doesn’t shock anymore with its visual effects, it’s worth remembering that it was created in 2002, and for that time it was quite revolutionary. As an example, consider how video and computer games, often with much higher budgets. looked like at that time. 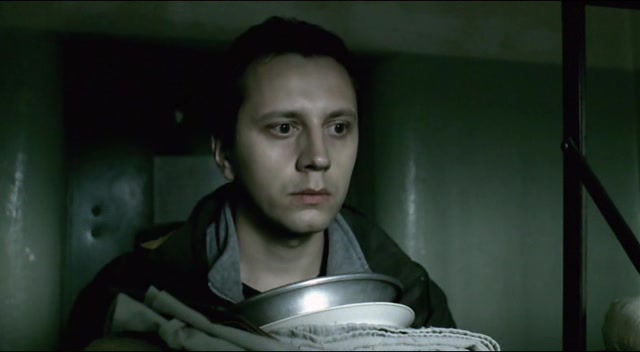 Few worse things could happen to a young man, a fresh college graduate, than being falsely charged with a serious crime without the possibility of defense, which was the case with 26-year old Łukasz (Arkadiusz Detmer).

Set basically in a single location with an overwhelming and dark atmosphere, “Symmetry” is a psychological drama about the complicated adaptation to a harsh environment.

At the same time, it presents how prison can affect the mind of an average citizen, and how the opportune environment can justify actions that couldn’t be justified in the outside world. It confronts Zimbardo’s famous prison experiment by showing that given adequate circumstances, people can completely change their beliefs about what is morally right or wrong at a certain moment. 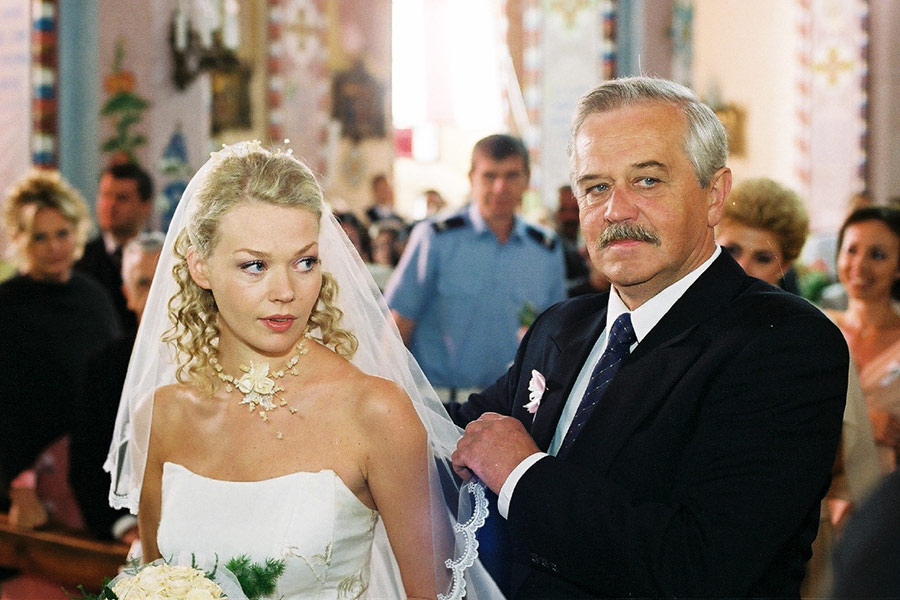 Wojnar (the wonderful Marian Dziędziel in this role) is a wealthy and respectful countryside man who organizes an opulent wedding party for his daughter. Following the “keeping up with the Joneses” rule, he wants to show off among his guests, so he puts a huge amount of money in both the party and the gifts for the couple. The party, however, turns out to be a series of absurd events that makes Wojnar’s money progressively disappear.

By presenting the overdrawn image of provincial society in both a hilarious and a disturbing way, Smarzowski brilliantly refers to the classic early 20th century play of the same title by Stanisław Wyspiański, which was adapted by Andrzej Wajda in his 1973 masterpiece, also called “The Wedding”. 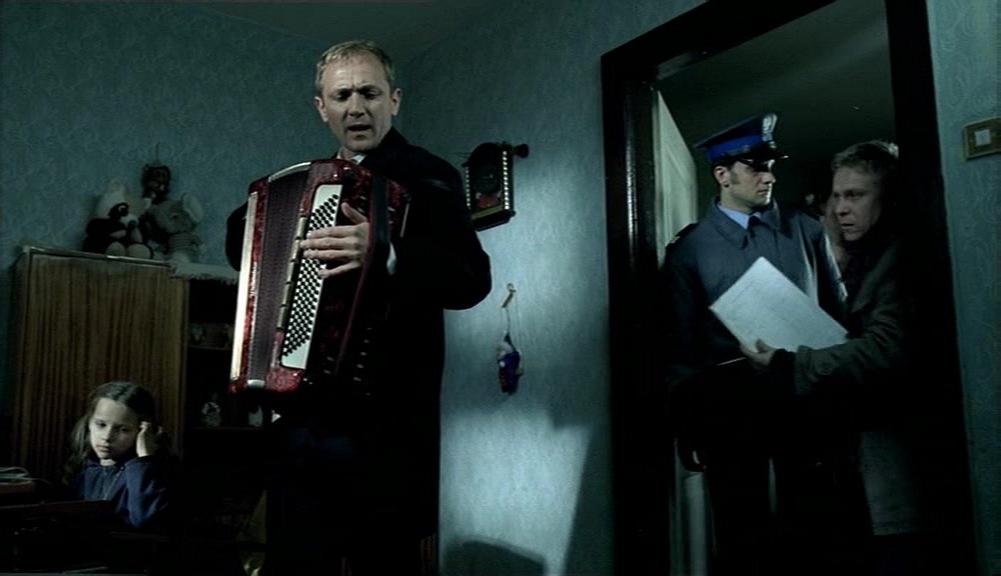 This is the highly absorbing story of Lucjan, a ruthless debt collector in a small, impoverished town in southern Poland. He is admired by his superiors and colleagues due to his incredible efficiency, but is hated by terrified local community. He treats everyone equally harshly with absolutely no mercy, no matter if it’s a financial fraudster or a hospital with temporary debts.

In this warmly acclaimed film, Feliks Falk studies the professional ethics with the example of a debt collector – is it possible to be fair with one’s own conscience, and at the same time, fulfill one’s professional duties?

Andrzej Chyra, in the remarkable title role, at first generates only negative emotions; however, later in the film, as he sees the destructive consequences of his actions, he totally redefines his look at the profession of a debt collector. Even if sometimes it’s a bit naïve and stereotypical, in some way this film could be a contemporary version of “A Christmas Carol”.

If “Day of the Wacko” could still be called a comedy, despite its tragic background, the next film from Marek Koterski is deadly serious without any doubts. The character known from “Day of the Wacko”, Adaś Miauczyński (played again by Marek Kondrat when he’s 55 and by Andrzej Chyra when he’s 33), along with his son, recalls painful memories of his fight with alcoholism.

It is extremely rare to find a film like this that not only presents the destructive results of alcoholism, but also profoundly analyzes the mechanisms of addiction, with the particular consideration to childhood and how easy these mechanisms could be transferred to the next generation.

Despite being quite painful to watch, this film brings also some hope that the chain of addiction could be interrupted at some point, and the children of alcoholics are not doomed to share the fate of their parents. 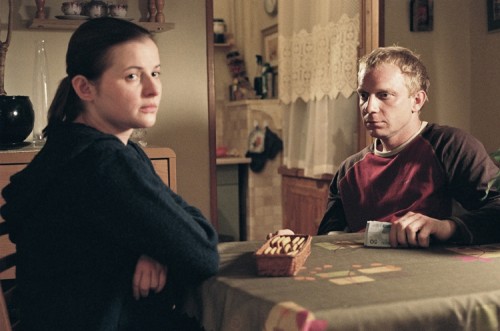 Named after the famous square in the center of Warsaw where most of the film takes place, it tells a story about a young couple, Beata and Bartek, with two small kids who, while still living at Bartek’s mother’s place, decide to take out a loan to cover the expenses for their new apartment. Troubles begin when the developer goes bankrupt, leaving them without money or an apartment. Since then, the tension between Beata, Bartek, and his mother starts to increase.

The real strength of this socially engaged drama is its credibility. Unlike “Hi Tessa”, which presented only a particular part of society, “Saviour Square” shows the actual tragedy of numerous families, not only the privileged ones.

The film reflects a huge part of Polish society at the very beginning of the 21st century; people who are financially trapped and despite huge efforts, unable to organize stable lives for their families. Among many claims and blames that main characters turn to each other, many viewers could identify with at least some of them with their own life partners, parents, or children.