Sometimes the appeal of a famous movie performer will be totally lost on us. “Why does anybody care about this actor?” we ask ourselves, doubting our own judgment or everyone else’s. But even worse than that disconnect is when a newcomer or established star finds a role that makes critics gush, the Academy swoon and your own shoulders shrug. All these choruses of approval over something you merely acknowledge.

What follows includes a few good performances, but all of those actors making the cut have been adorned for certain roles long past what you could call a justifiable extent. Here are the 10 most overrated performances of our millennia thus far.

10. Scarlett Johansson, Under the Skin

Jonathan Glazer’s long awaited third feature is by far his most experimental. Within it he makes a striking statement by minimalist, Kubrickian means, but Scarlett Johansson’s literally alien performance is a black hole at the center of a self-important film elevated by its visual virtues and improv filmmaking techniques.

Johansson has been typecast in robotic roles akin to Under the Skin, like in Lucy, the personality-less Black Widow in the Marvel Cinematic Universe and even this year as the cyborg Major in Ghost in the Shell. As thought provoking as the implications of her character may be in Under the Skin, the film doesn’t exactly showcase her ability to do so much with so little.

In fact, in the same year we saw her blossom in the exact opposite way. Nearly voiceless in Under the Skin, Johansson became the virtual girlfriend of our dreams in Her with just her rosy voice. The fruits of her labor through dialogue alone are wondrous compared to the vacant expressions of some of her least human work. 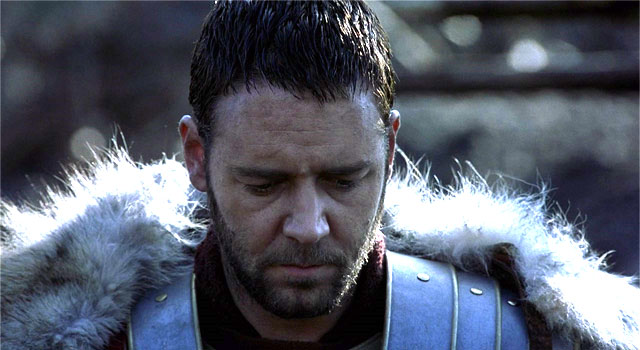 Though his career as somewhat of a flagship of masculinity in the 2000’s led to a handful of his best films a la Master and Commander: The Far Side of the World, Cinderella Man and 3:10 to Yuma, Gladiator is not a film that lets any of the subtleties of Russell Crowe’s abilities come forward.

Though scoped out with majestic intentions by Ridley Scott, Gladiator is a classically entertaining but hollowed-out slab of grand spectacle, Crowe being at least one reason why we are “entertained.” But when a borderline mustache-twirling villain in Joaquin Phoenix’s Commodus upstages you, it’s pretty disappointing for an audience to be unmoved by such a mythic main character.

Given the heightened emotions of a historical epic like this, feelings should be magnified, not diminished, by the movie’s scale and story, especially when Maximus has a tragic backstory and revenge plot to unfold. Though far from unwatchable, Crowe’s blank slate of anger and despair doesn’t equate to any Academy Award worthiness.

Sir Mark Rylance is decent enough actor, but often limited to roles of utter boredom onscreen – and yes, that is including Dunkirk. His conviction between Bridge of Spies and Christopher Nolan’s new film are practically the same – solemn yet concerned. Like Oscar winners Alan Arkin or Christoph Waltz before him, Rylance is a respected older actor that requires nothing more on set than to be himself – in Rylance’s case reserved and stoic – and everyone erupted in hoopla without much of a reason afterward.

It’s hard to understand what people were so amazed by in his performance as Rudolf Abel, fine enough as Rylance was may be opposite Tom Hanks. Bridge of Spies, like Abel, is reserved and patient, and the film and Rylance don’t require anything to the order of captivation; effectively capturing contemplation is enough.

When juxtaposed with his next performance in Spielberg’s following film The BFG, there is an immense distinction between the separate realizations of Rylance’s acting potential. He brings the Big Friendly Giant to life through the awkwardness of motion capture and likely mounds of makeup, delivering a masterful portrayal of a silly character and a memorable one at that. The actor’s hidden talents were seemingly prematurely rewarded, and hopefully more challenging material awaits him outside the wheelhouse of standard historical dramas.

7. Sandra Bullock, The Blind Side (or Gravity)

It would be easy to criticize what Sandra Bullock brings forth in Gravity, as she is the central weakness of a film built to be marveled at but less than emotionally or intellectually invested in. Her character is both over-explained and totally cliché, and as our guiding figure amongst rubble and carnage above our atmosphere, she made the film’s elementary dialogue all the more noticeable.

But in The Blind Side she is probably the best thing the film has going for it – maybe the only thing. The subtle racism that seems so very blatant now was veiled by its unassuming connection with mainstream audiences. The film was probably the most profitable non-blockbuster of 2009, turning a modest budget over by hundreds of millions.

The charity of Leigh Anne Tuohy is celebrated through Bullock’s performance, and that would be great if she wasn’t problematically overshadowing Quinton Aaron as Michael Oher, the true star of the film. It’s as if the now NFL player is but a second-hand element at play in a film made to appeal to white guilt through the white saviors of the Tuohy family.

Whether kicking ass or playing the romantic lead, Colin Firth has seldom stepped into really serious acting. His first real brush with Oscar glory came with a well-deserved nomination for his work in Tom Ford’s debut A Single Man, but his role of royalty in The King’s Speech was too programmed for Academy voters to be anything other than dutiful and forgettable.

Sure, when an actor undergoes physical transformations for the sake of authenticity – Eddie Redmayne for The Theory of Everything is a good enough example – then ideally the inputted effort results in a remarkable acting accomplishment. But a stammer is the kind of physical condition that is easy to fake and even easier to make look difficult.

Despite a respectable performance from Colin Firth nonetheless, his talents displayed in this polished but pedestrian historical period piece have been sorely overpraised.