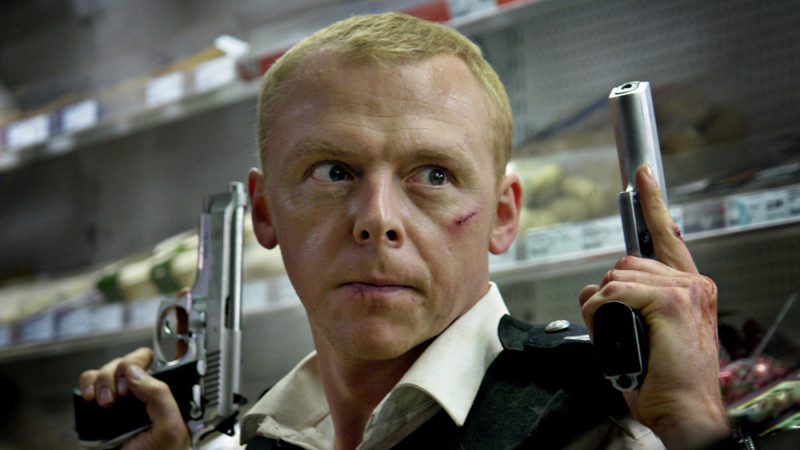 Everybody loves Simon Pegg. It’s not only the geeks who have a soft spot for the British actor, but anyone who’s ever seen any of his films. He’s humble, smart and a fine actor who’s provided some of the best laughs in over a decade. You’ll be hard pressed to find another well respected and likable actor (other than Tom Hanks, perhaps).

Heck, the guy seems to be living the dream. He’s worked with his idols Steven Spielberg and George A. Romero. He’s starred in some of his favorite franchises, like ‘Star Wars’ and ‘Star Trek’. He’s chums with the likes of Quentin Tarantino and Peter Jackson, among others. He’s skydived from Tom Cruise’s private jet. And of course, he’s Edgar Wright’s BFF. Not too shabby. Maybe we’re taking it too far, but one can’t help but envy Mr. Pegg, just a little bit.

More seen as a comedic actor, Pegg also has a natural ability to convey drama that makes his brand of comedy even more hilarious. His written and starred in some of the most fun movies in over a decade. He’s a pretty versatile actor who can slip into many different types of roles. He’s also a geek of note who loves to pay respect to anything that’s influenced or paved the way for him. 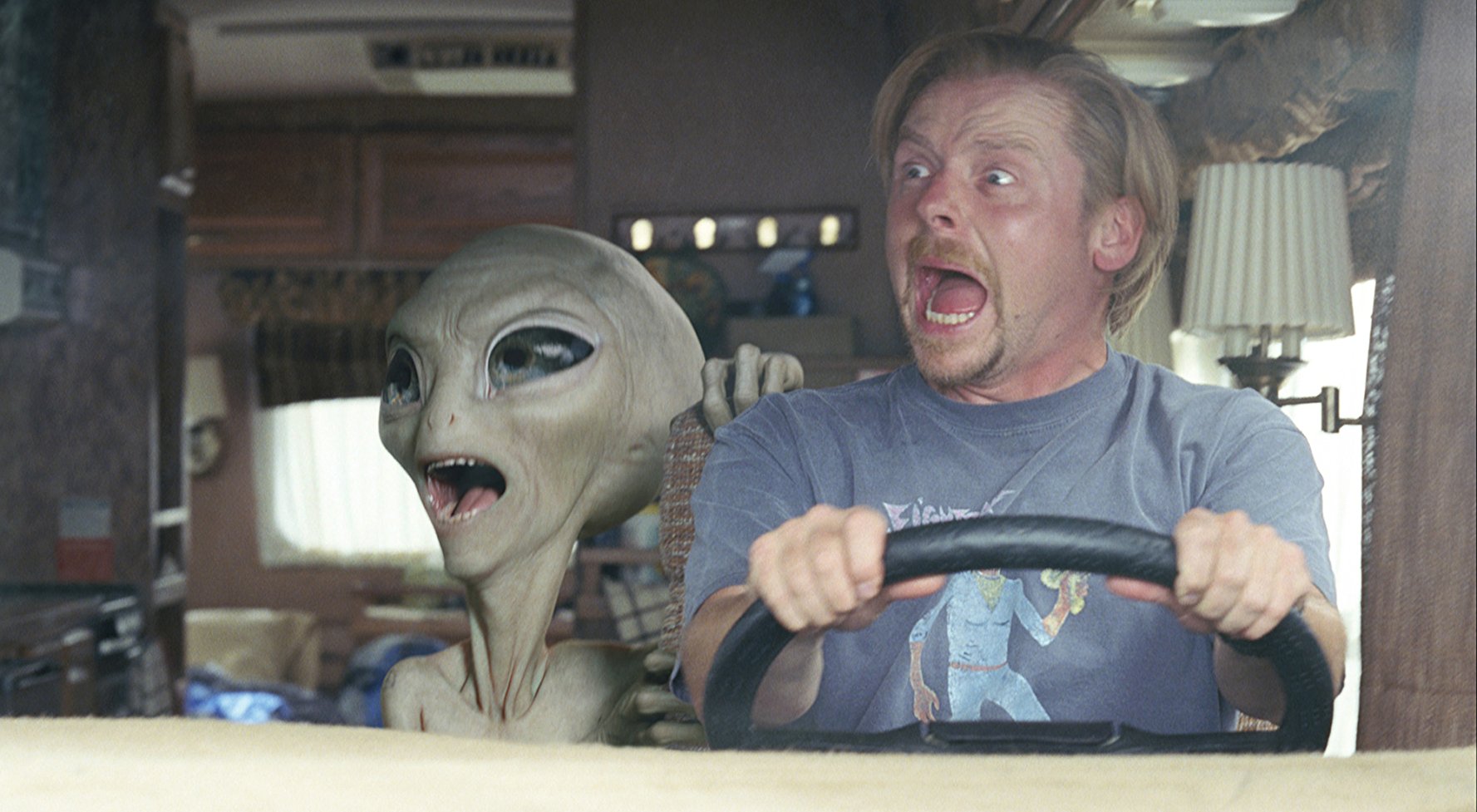 Pegg and Nick Frost play Graeme Willy and Clive Gollings, two British science-fiction geeks. After visiting Comic-Con they take a road trip through the American Southwest to visit the sites of reported extraterrestrial activity. Ironically, they bump into a real alien voiced by Seth Rogen who’s on the run from the government.

“Paul” never hits the heights of Pegg and Frost’s work with Edgar Wright. In fact, he is sorely missed in this love letter to all things nerdy. There are some funny scenes and gags scattered about but you can’t help but think “this should be funnier!” In the end, the film plays it way too safe and is lacking in the wit department.

But what keeps you watching are the performances that also include the likes of Jason Bateman, Kristen Wiig and Sigourney Weaver. Pegg is his usual likable self, playing the type of nerdy slacker he could play in his sleep. The comic timing may be off in certain parts, but some of the best moments are Pegg and Frost’s interactions with the foul-mouthed, motion-captured alien. 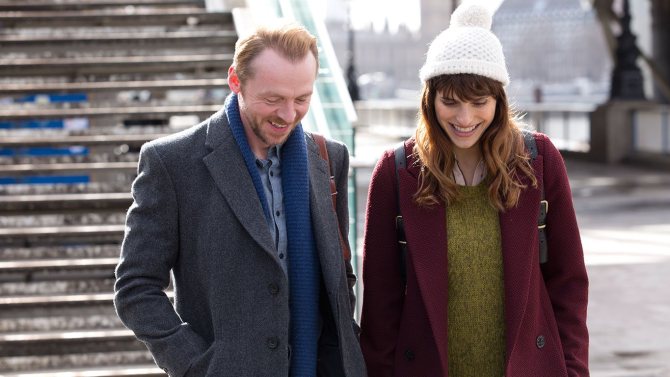 Nancy (Lake Bell), a single 34-year-old woman, meets Jack (Pegg), who mistakes her for his blind date. Instead of being honest about it, she decides to go on the date with him as a goof. Pretty soon she finds herself having fun and realizes that she may have met her perfect match.

“Man Up” isn’t anything we haven’t seen before. It’s predictable and overly familiar but somehow it’s surprisingly earnest. In its short 90-minute runtime, we’re treated to an honest rom-com that’s made even better by its performances. You won’t find anyone looking for an easy paycheck here. Everyone puts in the effort, which makes watching it all the more easier and entertaining.

Playing a 40-year-old divorcee, Pegg gives his character a certain maturity and honesty we rarely see in his roles. His performance is real and believable here. Switching effortlessly from comedy to the film’s more dramatic parts, Pegg gives it his trademark charm. If you haven’t seen it, you’re not missing out on anything other than its great performances. 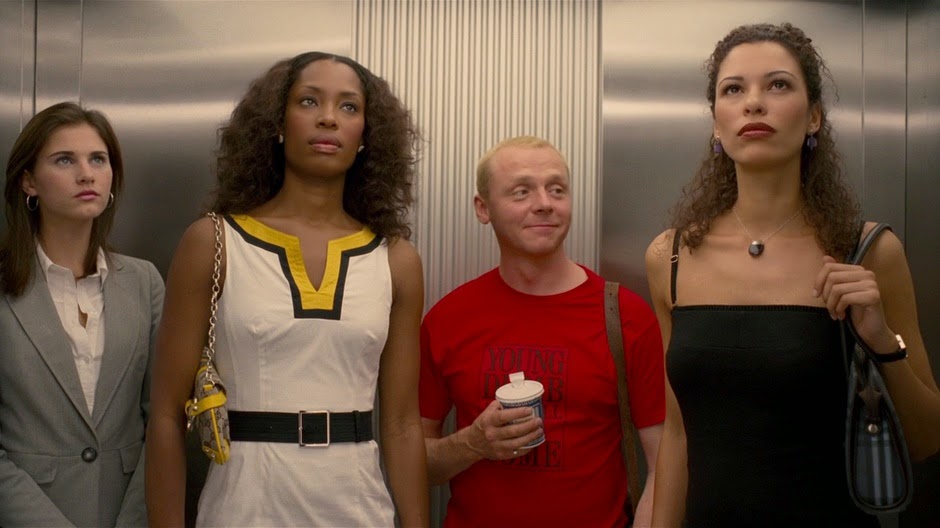 Based on Toby Young’s memoirs of the same name, Pegg stars as Sidney Young, the creator of a failing British tabloid magazine. After crashing the party of his idol, Clayton Harding (Jeff Bridges), who he believes has lost his bite, Sidney is offered a job in New York City. Arriving in town to rock the boat and recapture the bite Harding’s publication lost, Sidney is instead kept in check by co-worker Alison Olsen (Kirsten Dunst). His aspirations and British stylings don’t go down well in the Big Apple.

Not many people cared for this comedy, which ends up as a formulaic rom-com. The film does have its share of flaws and problems, but what keeps it watchable, again, are the performances. Pegg and Dunst have great chemistry and Bridges is fun as always as Sidney’s wig wearing boss.

Pegg throws his subtle comedy out the window and plays Sidney like a realistic version of Mr. Bean who can’t help but stay out of trouble. It may not be Pegg’s best performance, but it’s a breath of fresh air to see Pegg chew out scene after scene. Even when the script writes Sidney as more of an annoying jackass, Pegg keeps you rooting for him.

He’s the only one who keeps the laughs coming at a consistent rate. From the party, he crashes at the beginning of the film with a Spider-Pig, to his arrival abroad as an Englishman in New York. It’s all slapstick gold in a film that plays it safe and can’t quite commit to its interesting premise. 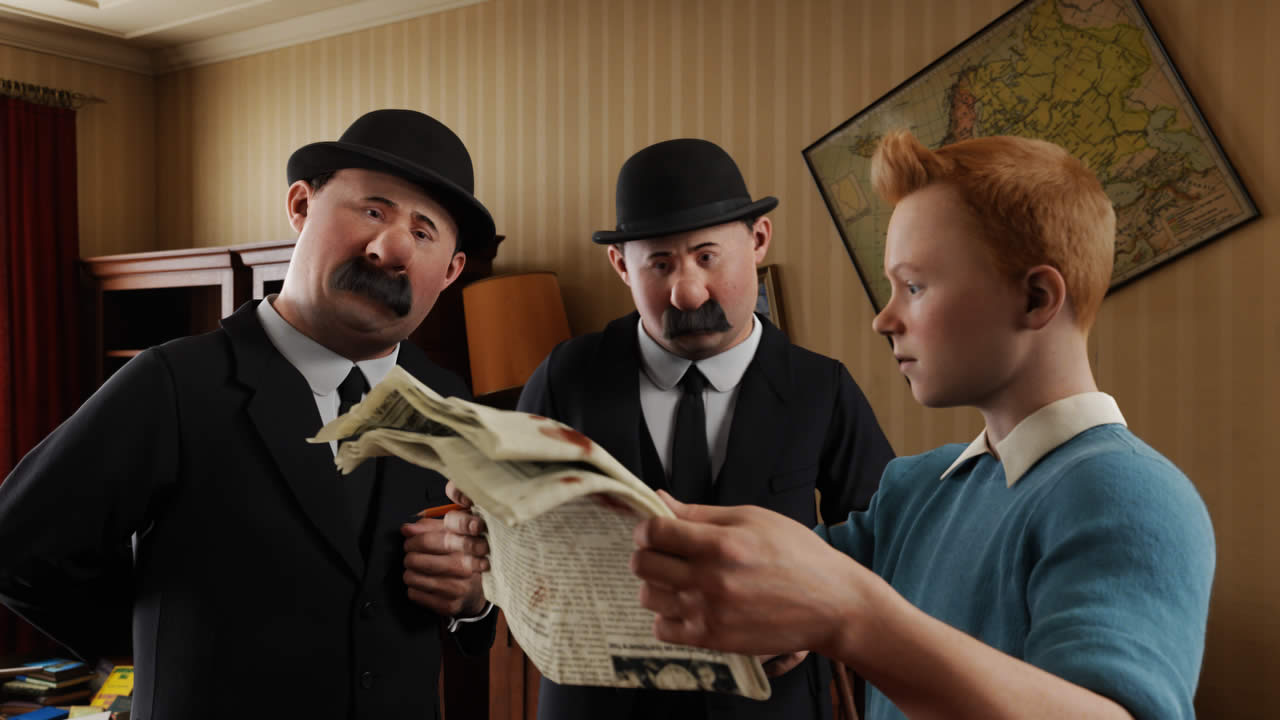 After buying a model of a ship called the Unicorn, Tintin (Jamie Bell) finds himself as a person of interest from shady characters all over. He soon discovers that the model ship contains a clue to hidden treasure. His quest to find out exactly what everyone is after takes him on a journey across the world.

Steven Spielberg and Peter Jackson decided to band together to bring the beloved comic book by Hergé to the big screen. In a quest to perfectly recapture the comic’s world, they looked to Pegg and Nick Frost to motion-capture and voice the two bumbling detectives, Thomson and Thompson.

The two detectives are pretty much identical in looks and manner, so who else would you call but one of the finest comedy duos in recent times? A tag team of a performance if there ever was one, Frost and Pegg are an essential part of the story.

From their back-and-forth dialogue to their more slapstick moments, Pegg and Frost perfectly capture the spirits of the characters from the comics.

Tom Cruise returns here as the un-killable agent Ethan Hunt. With the IMF disbanded, this time Hunt is riding solo and on the run from the CIA as he tries to prove the Syndicate’s (a powerful and mysterious terrorist group) existence.

Until proven wrong, “Ghost Protocol” will always be the best in the series. It’s the entry where Simon Pegg and his character were upgraded to regulars, which gave the series a more interesting dynamic. However, “Rogue Nation” is almost as good even if it doesn’t break any new ground.

There’s nothing wrong with playing the comic relief, the character who makes everyone laugh and gets all the girls after the lead. Pegg always makes his comic relief feel natural and unforced, and what gives his “Rogue Nation” performance a bit more punch over the others are the scenes at his new home in the CIA. In a total Pegg moment, he pretends to be working while playing video games.

But what really clinches it is the constant interrogations where he plays dumb to any knowledge of Hunt’s whereabouts, because he really doesn’t know where he is.

Pegg is just funnier in “Rogue Nation” without ever getting annoying. As long as they keep the series interesting, the ‘Mission: Impossible’ franchise will always feature fun popcorn movies.