The apartment is one of the most iconic symbols of modern life. It also lends itself to many uses in the film world due to its presentation of one’s relationship with the urban environment, our interaction with our peers and neighbours as well as its microcosmic traits.

In cinema, the use of apartments as set pieces also harkens back to fixed stage performances; complete with a certain intimacy and containment more common in theatre than in film. Here is a selection of films to have used the apartment setting in innovative and thought-provoking ways. Before beginning; honorable mentions go out to Breakfast at Tiffany’s, L’appartement (1996), and of course… Joe’s Apartment.

After her family is slaughtered by corrupt DEA agents, twelve year-old misfit Matilda is taken under the wing of expert assassin—or “cleaner”, as he prefers to be called—and fellow outsider Léon Montana, who trains her as his protégée. Together they form an unlikely bond in their efforts to avenge Matilda’s family’s murder and find their roots.

Although not the first action film to use the confined building as a setting (kindly refer to Die Hard), The Professional (veritably known as Léon, or Léon: The Professional) would become a landmark action film and key chapter in the hyper-stylized, larger than life cinema du look movement.

Director Luc Besson would go on to be involved in the writing and production of several other examples of these “contained” action pictures over the years such as the Banlieue 13 films and their American reimagining. The film uses narrow corridors and close-quarters living space to perfection; with fast-paced careening down never-ending hallways and rapid twists and turns leading into the most cramped of bathrooms to the most glamorous of high-rises.

Michael Haneke at his finest, featuring the great departed Emanuelle Riva, iconic Jean-Louis Trintignant and the forever incomparable Isabelle Huppert; Amour could not help itself from being sensational—an obligation it dutifully fulfills.

Riva and Trintignant play two lovers in the autumn of their life together, challenged by one final obstacle as Riva’s character suffers a stroke, leaving her husband in the role of her dutiful albeit under-qualified caretaker bound by the promise of never surrendering her to an indifferent hospital.

A visceral, demanding watch, Amour is the definitive case study in the messiness and brutal honesty of unconditional love, and a study of dignity and independence in old age. As the symbiosis of the main couple progresses, the more their ornate Parisian apartment becomes their private world. Although the use of the apartment within the film is not particularly noteworthy beyond its general beauty, a cinematic tour-de-force of this emotional magnitude cannot be omitted from the list.

Naturally, no list of apartment-related films would be complete without taking into account Roman Polanski’s “Apartment Trilogy”. The Tenant remains the final and most obscure entry in the trilogy; united solely by their setting and the themes that such a setting conjures.

It tells the tale of an ethnically Polish man, Trelkovsky, who is living in Paris as a French citizen. When the previous tenant of his meagre room dies of suspicious circumstances, and Trelkovsky becomes more and more convinced that his landlord and fellow tenants are conspiring against him; he begins to question his unreliable sanity.

The Tenant plays greatly upon the great ennui and discomfort that comes with sharing a living quarters with a group of perfect strangers. The exposure and vulnerability felt by Trelkovsky during a late night trek to the shared toilet in the midst of what could be compared to a disorienting fever dream is extremely discomforting to the audience.

Although most of the film is a disturbingly surreal take on issues of conformity and the persecution of The Other, one particular subplot wherein Trelkovsky’s neighbours encourage him to join them in ganging up on a particular scapegoat tenant who is causing a disturbance by which Trelkovsky is unaffected is an uncomfortably familiar example of the clannish aspects of group living. 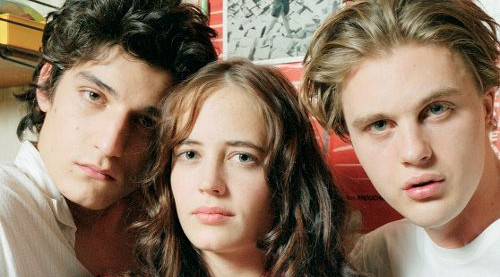 Bernardo Bertolucci’s iconic love letter to all the wonderful things that make cinéphiles detestable to the general public: Set against the backdrop of the May 1968 student protests and the Vietnam War, The Dreamers tells the story of the bizarre relationship that develops between Matthew, an American student in Paris, and his two film-crazed French friends, twins Théo and Isabelle.

In The Dreamers, the impossibly massive apartment of Isabelle and Théo’s conveniently absent parents takes on a form of a sort of desert island where the characters bar themselves from the outside world and plunge into a life of debauchery, pop culture immersion and copious amounts of red wine and cigarettes.

The deteriorating mess of a living space takes on a strange desirability as it becomes an extension of our main characters; adorned with pop-cultural capital, be it a poster for Godard’s La chinoise or pages cut from an issue of Jean-Claude Forest’s Barbarella.

Two brilliant young academics coldly murder their former classmate as an affirmation of their indifferent, survival-of-the-fittest philosophy. In an act of twisted pride at their accomplishment, the two killers host a dinner party in their apartment with the corpse hidden in plain sight; an old trunk from which the food is served. The film proceeds to showcase the pair reacting under pressure as they think on their sins over the course of the dinner.

Rope concludes with the pair’s academic/philosophical mentor—played by Jimmy Stewart—discovering the murder and realizing with disgust that his former pupils had acted upon inspiration from his own discourse. He does what only Jimmy Stewart can and condemns the boys for their inhumanity with immeasurable gusto, then alerts the authorities.

Working with a theme that Hitchcock would later go on to perfect, Rope is notable not only for its fixed apartment set, which gives the whole production a theatrical stage flair, but as every film buff would delight in reminding you, the film is notorious for its use of the illusion to have been filmed as one continuous shot.

In all truthfulness this setting decision was probably made for practical reasons; as it’s no doubt easier to hide cuts and edits in a fixed space that contains the action than a constantly moving and changing one. However, the apartment setting provides a perfect backdrop for suspense, and the paranoia that anything could happen in such a small space; especially with the corpse right under everyone’s nose.

In terms of content, the film could be read as a criticism against self-serving, pseudo-nietzschean philosophies that see to the needs of the individual and disregard the well-being of the group; a criticism that was very much in vogue during the film’s post-war release.