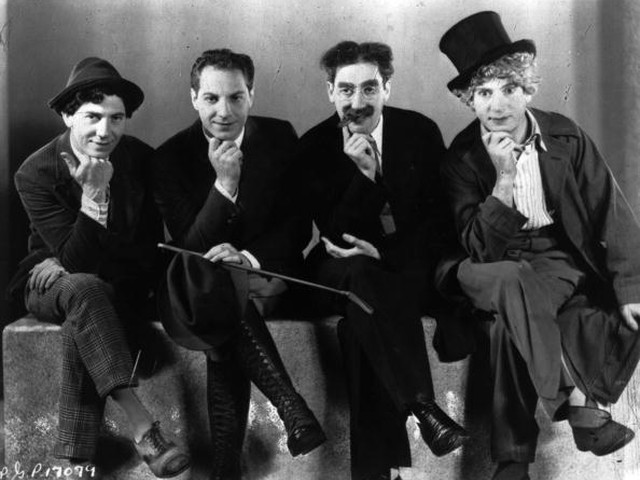 Animal Crackers, the second feature starring the Marx Brothers, released in 1930, is over eighty years old now, and it still leaves me hard-pressed to find many films that afford such amusement, banter, satire (high-society is pitilessly spoofed), and joy as it does.

It’s not that I think modern comedy is unduly overworked or self-important (though the likes of the Wayans Brothers and Adam Sandler do get me a tad tense and more than a little tired), indeed so much au courant comedy is as triumphant as it is ticklish (Maren Ade’s Toni Erdmann, Akiva Schaffer and Jorma Taccone’s Popstar, and Taika Waititi’s Hunt for the Wilderpeople are all hot-off-the-fire and hilarious).

But I do find that much of today’s contemporary comedic landscape often defaults to gross-out gags and shopworn shock tactics as opposed to satire and sharp wits. It might be easy then, to disregard or flat-out forget that some of the cleverest comebacks and fast-paced farce that the world ever saw commenced with the Marx Brothers back in the dirty thirties.

Depression-era audiences were trading quips and much needed chuckles from these shining siblings—Chico, Groucho, Harpo, and Zeppo (eldest brother Gummo was out of the act by the time they stormed the silver screen) — who first fine-tuned their dizzying act in Vaudeville and later, Broadway.

Soused in the show business tradition, the history of the Marxes is itself as entertaining, lively, and distinct as their long and storied careers. But it was Animal Crackers, directed by Victor Heerman, that cemented their brand of coordinated chaos and ironic anarchy, at least to the world stage.

“Quote me as saying I was misquoted.” 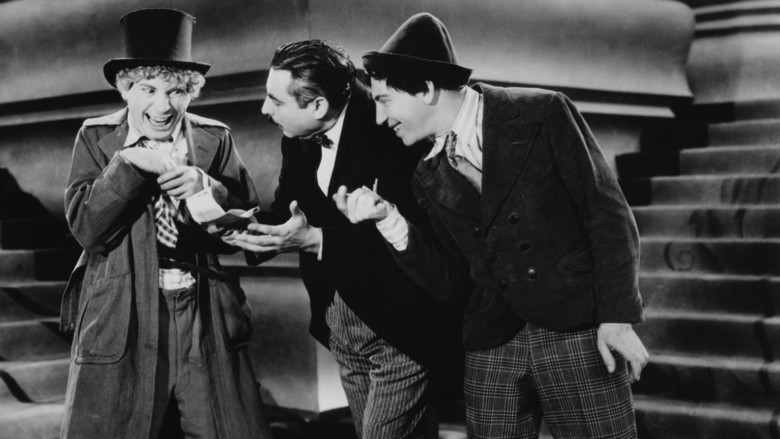 Heerman had his hands full with the Marx Brothers, famously he told of having a “jail cell” constructed just off set to help corral the Marxes, who were often hard to reign in. Heerman even attempted to get Groucho to trade in his greasepaint moustache, which worked fine on Vaudeville and Broadway, for a more convincing false one. It was Heerman’s feelings that the paint was unconvincing, Groucho refused, quipping “The audiences never believed us anyway!”

Suffice it to say, Heerman never worked with the Marxes again, though he often spoke respectfully of them (though rarely in connection to Animal Crackers, which ended up being one of Heerman’s biggest hits). He may have butted heads with the boys throughout filming but he certainly honoured their comedic instincts, particularly with the material.

In the previous year, while working on their debut film, The Cocoanuts (also excellent, but, as with many early talkies, is plagued with some technical obstacles which results in a much more stagey and confined film), which they shot during the day at Astoria Studios in New York.

When the production would wrap each evening the Marxes would motor across town to Broadway where they were performing the stage version of Animal Crackers to sold out crowds. Their efficiency and work ethic was astounding, and by the time it came to film Animal Crackers the troupe knew it inside and out, along with a full grasp on what gags got big laughs.

This familiarity with the material gave a confidence to the brothers that had them straying from the script constantly but winningly, as in Groucho’s Capt. Spaulding having an off-the-cuff exchange with the rascally Roscoe W. Chandler (Louis Sorin, who almost breaks character but somehow holds it together) with hilarious results that crazily crumbles the fourth wall.

George Kaufman, one of the writers of the play Animal Crackers (and also The Cocoanuts) once got devotedly distracted in a backstage interview during a Marx Brothers performance, submissively saying, “I’m sorry, it’s just that for a moment there, I thought I heard one of the original lines!”

“When I started to write comedy, it was the Marx Brothers influence that moulded my style. Sanity was out, logic was out, creative lunacy was in.” 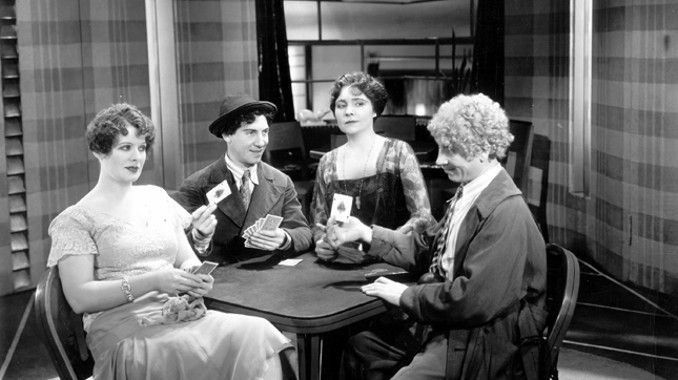 I’ve often debated with other aficionados as to which film is the Marxes best and my opinion and preference has often changed over the years (my personal favourite is Horse Feathers but then again it doesn’t have Margaret Dumont, their greatest foil), but I happily agree that Animal Crackers provides some of their most delightful arrangements with each brother getting incessant illumination.

For the unfamiliar and unschooled, take note that Animal Crackers is the anarchic apogee of the Marx Brothers, with each one getting their moment in the spotlight. Why, even Zeppo, typically the thankless straight man, as Horatio Jamison, gets to be funny and lasso some big laughs, and Groucho’s frequent strange interludes are some of the most genius non sequiturs ever uttered.

But beyond the ruses, witty remarks, and musical respites (yes, Harpo fondles the harp and Chico, at the piano, does his patent shoot-the-keys schtick), something else, something altogether astonishing, occurs. This film frisks with a sense of the surreal and offers evidence that these gifted brothers were touched with the divine.

“If there is a definite characteristic, a distinct poetic state of mind that can be called surrealism, Animal Crackers participated in that state altogether.”

Eugène Ionesco, the renowned practitioner of the Theatre of the Absurd said that “the three greatest influences on my work are Groucho, Harpo, and Chico.” The surrealist movement was profoundly affected by the Marxes, as it would turn out. Both Luis Buñuel and Salvador Dalí (their classic collaborative film, L’Age d’or came out later the same year) became greatly indebted and inspired by their hysteric hijinks and dream-like logic that’s so alloyed and entrenched in their milieu.

In fact, Dalí became so smitten with the Marxes that he would later write a screenplay for them (never produced as it was famously “lost”, Giraffes On Horseback Salad remains one of the great unfilmed flowers of cinematic history), and he even constructed a special, custom-made gift for Harpo; a harp with barbed-wire strings. As the story goes, Harpo immediately set about playing it, with bloodied results, much to the morbid but playful delight of Dalí.

“Animal Crackers is the summit of the evolution of comic cinema.” 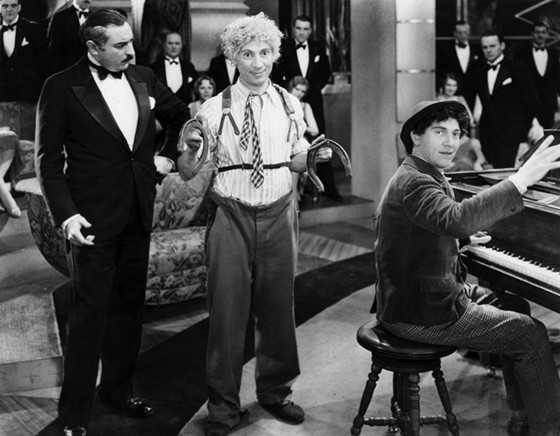 It’s hard to imagine any type of avant-garde comedy without considering the impact meted out to it courtesy of the Marx Brothers. So many talents and so many troupes were encouraged and sustained by their act and by their ideology.

From the Goons (including such notables as Spike Milligan and Peter Sellers), Mel Brooks, Monty Python, Woody Allen, Rowan Atkinson (Mr. Bean is beholden to Harpo), and Mr. Show to the fearless physical comedy and confrontational agitprop of Sacha Baron Cohen, their marks can be found in the most unlikely as well as the most obvious of places. And it’s worth more than a mention that their musicianship has also been a matter of merit for many admirers.

Few of today’s superstars were as multi-talented and proficient as the Marxes, and Animal Crackers features some of their finest music (the signature “Hooray for Captain Spaulding, “Why Am I So Romantic” and “Hello, I Must Be Going” were huge hits, now considered time-honoured classics).

“Some years back I came to the conclusion that Groucho Marx was the best comedian this country ever produced. Now I am more convinced than ever that I was right. I can’t think of a comedian who combined a totally original physical conception that was hilarious with a matchless verbal delivery. I believe there is a natural inborn greatness in Groucho that defies close analysis as it does with any genuine artist. He is simply unique in the same way that Picasso or Stravinsky are and I believe his outrageous unsentimental disregard for order will be equally as funny a thousand years from now.” 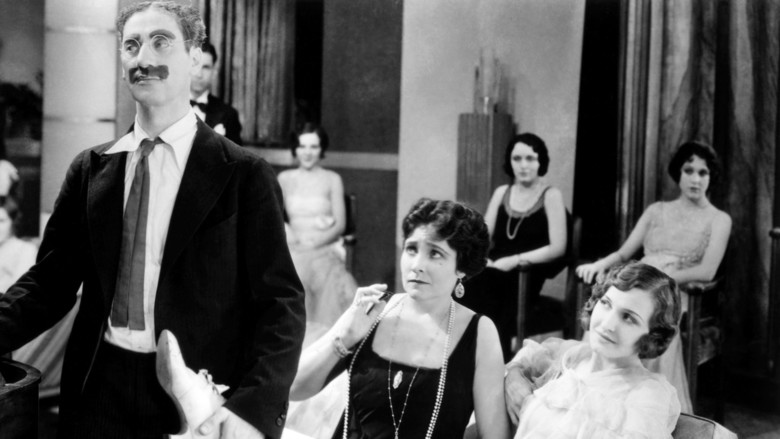 Part of what makes Animal Crackers so wonderful is its lively premise. Groucho is the prime focus, as explorer Jefferey Spaulding, recently returned from an African safari (“We took some pictures of the native girls, but they weren’t developed—but we’re going back again in a couple of weeks!”) and now the guest of honour at a haut monde reception hosted by Mrs. Rittenhouse (the gilt-edged Margaret Dumont).

Other appreciated guests at the party include the Professor (Harpo, outstanding as he unleashes more misconduct than one can imagine), and Signor Emanuel Ravelli (Chico, who delights in upstaging his brothers in almost every scene he shares with them). As the plot dictates, a highly valued painting is to be showcased at the party but it is stolen.

What ensues from this rather lax scenario is merely a device for a rapid train of sketches, innuendo, visual gags, waggish one-liners and put-ons that intensify and widen until crescendo. Like their best work (and Animal Crackers certainly stands shoulder to shoulder with other Marx masterpieces such as Duck Soup and A Night at the Opera), it anarchic kicks and subversive surrealism doesn’t let up.

It’s comic heights, and there are many, dazzle and delightfully disturb. So what if the little story there is was really just a transition to the next punch-line? Especially for the downturned audiences at the time, who needed escapism in order to endure the Dust Bowl.

“If Groucho and Chico stand against a wall for an hour and forty minutes and crack funny jokes, that’s enough of a plot for me.”

After Animal Crackers the Marx Brothers would travel to Hollywood for the rest of their films and their stowaway comedy caper Monkey Business would be another hit for them the following year, in 1931.

It’s amazing, almost unbelievable even, that the Marxes would achieve such longevity and such magnetism. Fourteen feature films (not including cameos) between 1929 and 1949, and excited solo careers for them all as well, though none so successful as Groucho, who would also dominate the small screen (his long-running stint on You Bet Your Life clinched his perpetuity).

And whether it was Harpo stealing the spotlight on I Love Lucy or Groucho’s late career renaissance and resurgence (by the 1970s a new wave of fans, ushered in by both Woody Allen and the politically astute counterculture, hopped on the Marxes bandwagon in a revival that saw their films meet bigger audiences than ever before), these ever-amusing, blindingly brilliant brothers gave us great diversion and generous delight.

They’re my favourite fools, their send-ups always cheer me up, their disregard for authority is an inspiration, and their artistry can’t help but impress and uplift. The Marx Brothers are forever blessed with simply being the best.

“[to the audience] Well, all the jokes can’t be good. You’ve got to expect that once in awhile.”