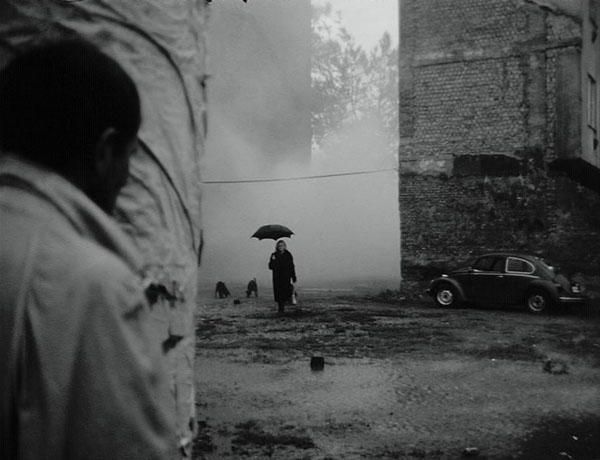 Not only the first film generally recognized as being in the conventional Tarr style – formalistic, less plot-driven, and (what lacked in his previous “Almanac of Fall”) a black-and-white colour scheme – “Kárhozat” (“Damnation”) was also his first collaboration with László Krasznahorkai, who would go on to co-write all of Tarr’s future films with him.

Karrer (Miklós Székely) is a drunkard whose apathy is the only thing keeping him from going insane. His raison d’être is a desperate love for a singer (Vali Kerekes), who he knows will never reciprocate it. He sets up her husband for a felonious job to try to get him out of the way, starting a noir-esque plot of greed, corruption, and betrayal.

In a vengeful, mistrusting world, Karrer’s repetitive attempts at courting the singer are an absolute failure. Hédi Temessy’s character, seemingly harmless, advises Karrer throughout the film, but her pushing him to “live life” (i.e.: accept the responsibilities of the real world) is what ultimately leads him to betray all accomplices to the police, subsequently causing his mental breakdown.

After opening on coal buckets being cabled through the sky (Karrer’s coping mechanism for the real world), the film closes on the mud as he’s damned to live with his newfound pains. 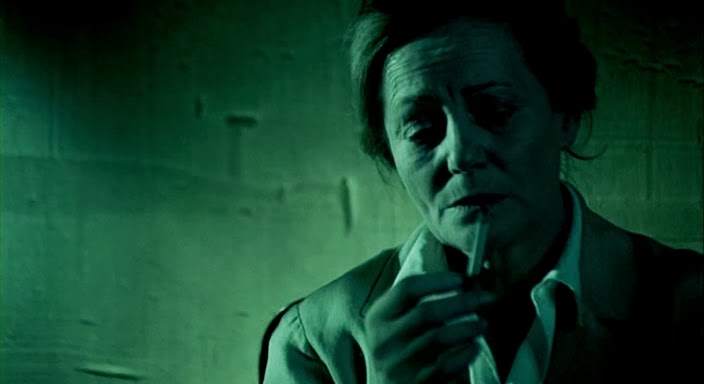 A more formalised composition with longer runtimes per shot, simultaneously volatile and apathetic characters, biting dialogues, and beautifully dilapidated sets reflecting the bruised souls that err in it, “Almanac of Fall” is a portrayal of humanity’s misguided wandering, our blind existential shuffle inevitably headed for doom.

For evidence of this, one would need to go no further than the first few seconds of the film, opening on a quote by Alexander Pushkin: “Even if you lead me, this land is unknown. The devil is probably leading, going round and round in circles.”

With this film, Tarr continues to showcase our moral degradation and corruption in a world without light – or at least natural light, symbolic for the absence of God’s Light. The characters – Anna, a manipulative nurse (Erika Bodnár); Miklós (Miklós Székely), a depressive alcoholic in a tumultuous relationship with Anna; and Tibor (Pál Hetényi), a schoolteacher whose willingness to live is fading – all live at Hédi’s house (Hédi Temessy) with the wealthy matriarch and her greedy and violent son (János Derzsi).

We – and the characters – never leave the confines of the house, making the film a huis-clos, underlining the perpetual claustrophobia felt by the characters suffocating in a world of their own creation, as they all scurry to court Hédi for her affluence.

In a rare move for the director, this film is the second of two features he has done in colour. The artificial lighting is both beautiful and symbolic; it reflects the twisted and highly volatile dynamics between the characters as they desperately either try to cheat or sympathise with each other.

It’s also the first of Tarr’s films to have a score, instead of track, as deep, ominous synth notes add a chilling layer of depth to the “Stalker”-like visual cues. Tarr would go on to use similar scores in the future, although his usage of music in crucial filmic segments predates “Öszi almanac”.

The film opens on a fire being put out. Tarr’s exploration of the homology between light and darkness was never as stark and concise as in “Werckmeister harmóniák” (“Werckmeister Harmonies”). Based on “The Melancholy of Resistance” (1989) by László Krasznahorkai, it criticises systems of political and economic influence by showing how they ultimately bring out the worst in humanity.

Through the eyes of János (Lars Rudolph) and his older friend György (Peter Fitz), we see the arrival of a circus to an unnamed town. With it comes the awe-inspiring carcass of a blue whale and a shadowy, charismatic speaker only known as “The Prince”, wholly disrupting the balance of life in the town, inciting desperate acts of hatred, rooted in and followed by a nihilistic vacuum in the hearts of people.

“Werckmeister Harmonies” is set at the end of the Second World War, just as the U.S.S.R. was establishing its presence in Hungary. The opening scene has János directing the patrons of the bar, recreating our solar system, staging an eclipse, using them to reveal our existential fears. In doing so, he also shows that the sun will eventually return to bathe the earth in light.

This is used as an allegory not only for the circus (and subsequently the Soviet occupation), but also the fear of living beings when darkness seemingly takes over. The thematic of light and darkness is also represented in the aesthetics of the cinematography and the editing.

György’s speech about Andreas Werckmeister’s theories is also an allegory of human governance (represented by musical temperament), which he is opposed to in the beginning (representing his resistance), but ultimately capitulates by tempering his piano after János is put in a mental hospital due to his dissidence (losing his voice as free speech becomes more scarce).

György finally goes to the whale, a cathartic moment encompassing his failure to resist the new regime. The film ends by fading to white, as light must return.

After a career spanning over 32 years, Tarr puts out the candle with “A torinói ló” (“The Turin Horse”). The film is set after the horse-whipping which supposedly brought on Friedrich Nietzsche’s psychosis. In a total of 30 shots, we are submerged into the life of the stableman and his daughter (owners of the lashed horse), played by János Derzsi and Erika Bók, respectively.

The two actors deliver haunting performances; Erika Bók especially feels reminiscent of a Bressonian “model”, much like her previous roles with Tarr in “The Man from London” and as the little girl in “Satan’s Tango”.

The film is divided into six days; perhaps an ironic contrast of the six days in which God created Earth in “Genesis 1” with the apocalyptic atmosphere, reflecting the idea that “God is dead” – morality and purpose are no longer self-evident. It’s through these concepts that were a core part of Nietzsche’s oeuvre, even if he isn’t to be seen in the film, that we feel his presence.

The horse riding through the perpetual mist is reminiscent of Sjöström’s “Phantom Carriage” (1921), drawing a parallel between the stableman and the driver of Death’s carriage, adding to the gloomy atmosphere and the motif of Eternal recurrence. Recurrence is possibly the most important thing in this film. Tarr has described it as being about “the heaviness of human existence” (Cineuropa, 2011), and the film is indeed heavy.

Every frame feels heavy, in depth and breadth. Every day we see these characters do almost the exact same thing, but in a shorter time frame, as if a fuse was slowly reaching its climax, whilst we see their lives slowly crumbling each day as the horse doesn’t move and the storm rages on. Instead of six days of creation, we see six days of decomposition.

The fuse doesn’t lead to an explosion, but extinction. As every light goes out in the small house, the stableman and his daughter are left in pitch black, abandoned by God in a darkening world.

“Sátántangó” (“Satan’s Tango”) is one of the crowning achievements not only in Tarr’s career, but in cinematic history. Being in the top 20 longest feature films ever with a 432-minute runtime, the film has much to offer.

Based on László Krasznahorkai’s eponymous 1985 novel, the film is structured like a tango, divided into twelve parts: six moving forward, six going back. We follow the directionless lives of residents at a collective farm, now disaffected due to the deterioration of the Hungarian People’s Republic.

This film is a collection of all the traits for which Tarr is best known; its breadth covers all the themes and motifs he has touched upon, like lack of Authority, both in the spiritual and political realm.

The latter is represented by the assertive Captain (telling us that order and freedom are tied by passion, dooming apathetic characters) as well as by lethargic officers who review the workers’ papers, painting a pompous and absurd image of humanity’s failed attempts at leadership, leaving the capricious community to follow Irimiás (Mihály Víg), a worker believed to have been dead, returning as a mysterious ringing of non-existent church bells is heard throughout the town. His manipulative rhetoric turns him into a False Prophet figure.

Corruption of both body and mind – through paid sex and greed – comes back in the form of Mr. Schmidt’s and Futaki’s failed plot to steal everyone’s money; the prostitutes also contribute to the oblivious apathy felt by all the villagers, leading to the neglect and ignorance causing Estike’s death (Erika Bók). Indeed, one of the most memorable parts was Erika Bók’s indelible performance as the forgotten child.

Tying into the motif of inseparable malice and apathy, the wasteland reflects the void felt inside Estike, developing into a blind lust for power. Her torture and subsequent poisoning of the cat, and then herself, is analogous to the desperation evoked in the rest of the characters.

The correlation between human and animal life and their Eternal recurrence are also constantly referred to in “Satan’s Tango”, in particular in “The Job of the Spider II”, with the almost tragic persistence of the old drunk shouting “Tango! Tango! Tango….”, after which the spiders “attack”, doing their work in the dark, only to scuttle back to their corners and having to repeat it again and again.

Finally, there is the misanthropic Doctor (Peter Berling) who does nothing but observe the events unfolding from afar, scribbling down notes in a condescending manner. Even though deeming himself superior to others – so much so he lives the life of a hermit – he must venture outside for liquor, showing that all have vices. His intersection with Estike (and failing to help her) proves that his dismissive nature is equally detrimental to society.

After suffering a stroke, he wakes to find all the other villagers gone. Hearing the sounds perceived to be church bells at the beginning of the film, he goes to investigate, only to find an old madman banging a stick against a piece of metal in the ruins of a building.

Symbolising the absurdity of everything, and our capacity to forge meaning where none is to be found, his banging echoes throughout the wasteland. The perturbed doctor returns home. Having lost all hope and meaning, he boards up the windows of his house, darkness taking over any remaining light.

Author Bio: Luka Simić is of serbo-croatian descent, born in Paris, and ultimately a citizen of the world. Currently living in Brussels, most of his time is spent writing and directing films, and his free time is spent on filmosophy and writing critiques for television series and movies.