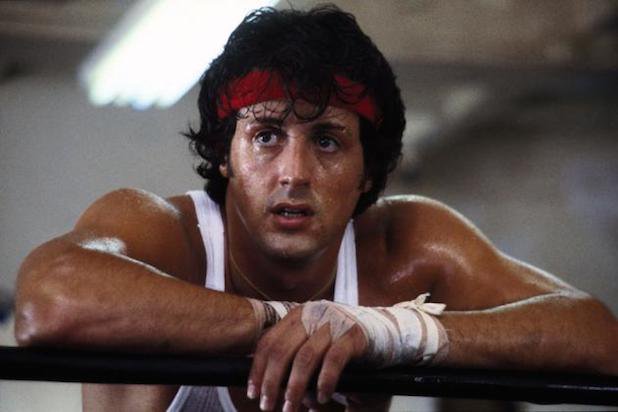 On December 3rd, 1976 a low budget sports drama opened in the cinema, written by and starring an unknown actor Sylvester Stallone. The film was Rocky and it would go on to become the highest grossing film of the year and be nominated for ten Academy Awards.

Rocky went on to spawn 6 sequels in the series and made Sylvester Stallone a household name. It also had a huge influence on pop-culture. Not only did the film’s success inspire many first time actors and writers, it also inspired many athletes and sports stars.

Ironically, the Rocky films almost mirror Stallone’s life. During the First film, he was struggling to make a living and no one believed in him, the same was true for the Rocky character. For the Third film, Stallone was dealing with being so famous he was becoming out of touch with his roots, Rocky was also dealing with the same situation as a fighter.

The Fifth film has Stallone and Rocky both saying goodbye, one to the series he created and the other to his boxing career. The Sixth entry had Stallone make a new Rocky film many years later, even though the studios didn’t really want it, which echo’s Rocky Balboa coming out of retirement at sixty years old for a comeback fight. And Creed focuses on the Rocky character, as well as Stallone, passing on the torch to someone new to carry the series.

The setting of Philadelphia is completely iconic to the franchise. While tourists flock to Philly to visit the Liberty Bell and Constitution Centre, many others go to visit the Philadelphia Museum of Art or more specifically the stairs leading up to it, commonly known as the “Rocky Steps”. The Rocky statue which appeared in Rocky III was donated by Stallone to the City of Philadelphia and now stands tall at the bottom of the stairs, often with a line of people waiting to snap a photo with it.

2015 saw the Rocky spinoff “Creed” released to critical acclaim and box-office success. With the sequel announced for a release in 2018, the long-running sport’s drama shows no signs of fatigue. 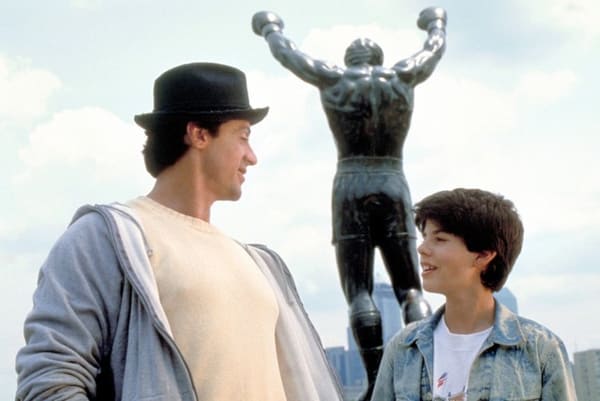 After the fight in Russia against boxer Ivan Drago, Rocky Balboa is forced to retire after suffering from permanent brain damage. More bad news awaits Balboa, upon returning home he discovers that his fortune has been lost by his accountant on the stock market.

Rocky and his family are forced to sell their assets and move back to their old neighbourhood. With his boxing days in the past, Rocky begins coaching a young up-and-coming fighter named Tommy Gunn. However, after finding some success, Rocky finds it hard to compete with another manager in town who wants to lure Tommy with glittering prizes and high salaries.

One of the main issues is the writing. The way Balboa loses his fortune seems contrived, plus the fact he doesn’t seem to have any resentment towards Paulie afterwards. The relationship rift between Rocky and his son Robert also seems forced and isn’t quite as compelling as it’s meant to be. Another big problem for this entrant is Tommy Gunn. Tommy Morrison isn’t the greatest actor and the majority of his delivery is a little wooden, plus the country bumpkin character is annoying and some of his decisions and thought processes are baffling to audiences.

Trying to modernise Rocky V has ironically made it age worse than the previous films. Replacing the majority of Bill Conti’s score with late-eighties/early-nineties hip-hop reduced the epic feel of the soundtrack and makes it sound more like a TV movie by today’s modern standards.

For all its problems, Rocky V still manages to complete the task of bringing the series full circle. Bringing in the original director. Locating it back to the mean streets of Philly. And stripping back on the excessiveness and over the top montages of parts III and IV. Rocky V is more of a drama, akin to the 1976 classic. The film starts off very strong with an emotional and powerful performance from Stallone. The switch-up with the ending including a street-fight rather than a boxing match was also refreshing and handled extremely well. Rocky muttering the line “I didn’t hear no bell” is a superb moment.

Overall, the film’s flaws are hard to ignore and at the time audiences believed this was the final Rocky film and the series went out with a whimper rather than a bang. 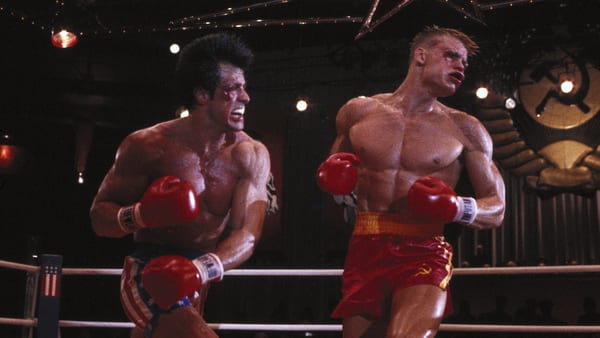 The fifth part of the Rocky saga is completely preposterous in nearly every single way. It’s essentially a 90-minute montage which results in Rocky Balboa ending the Cold War. And it’s as highly entertaining as it is illogical.

Russian power-boxer Ivan Drago has been scientifically trained using high-tech equipment and experiments. Apollo Creed accompanied by Rocky meets Drago for an exhibition match. After the match doesn’t go as planned, Rocky promises to get Revenge on Drago in the name of Apollo and the United States of America. Against the wishes of his wife Adrian, Rocky travels to the USSR to meet Drago in the ring. Apollo’s former manager Duke helps Rocky prepare for his fight by training him in the frozen Soviet countryside.

From the intro with the 2 giant boxing gloves colliding followed by a big explosion, you know you are in for an entertaining ride. What follows is barely any proper narrative and the basic formula rehashed but set during the Cold War. Rather than focusing on the story or the drama like the previous entries, this one focuses on montages. There are at least 5 different montages! Including 2 different training montages back-to-back that are only separated by a couple of minutes.

Set during the Cold War, the film is full of many Russian and American stereotypes. Brigitte Nielsen is a Russian ice-queen caricature with an accent which could be bordering on offensive. And Drago as billed as the most intimidating character in the whole series, even if he does look a little dopey at times.

Ivan Drago is seen punching a machine which shows he hits at 1850 PSI, which is enough to shatter a skull. Apollo Creed’s entrance for his exhibition fight is a highly entertaining camp moment in the series. Dressed in his red, white and blue Uncle Sam outfit with James Brown singing him to the ring with “Livin’ In America”. Absurd but completely entertaining.

At a neat ninety minutes, including at least five minutes of rehashed footage of previous films, Rocky IV is a breeze to watch. While not being a brilliant film, it’s more likely to make guilty-pleasure lists. It’s great fun from start to finish as there is no time for the film to slow down. But that’s also its main problem. Even after including one of the most deeply emotional moments from the whole series thus far, the film as a whole still lacks any emotional depth and doesn’t manage to have the same human connection from previous films. 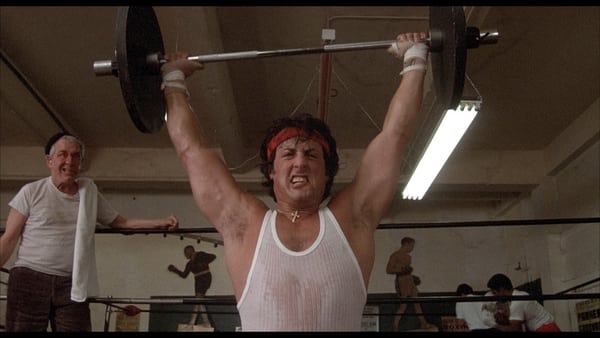 Three years after Rocky, Stallone and the original cast returned. This time, as well as writing and starring, Stallone also took up the director’s chair. While not making as much money at the box-office or being as well received by critics, the sequel was still a large success and set up the franchise to continue for years to come.

After his World Heavyweight Championship fight, Rocky is enjoying life. Settling back into normality, Rocky and Adrian decide to get married and go back to their simple life. Embarrassed after losing his endorsement deal on a commercial, Balboa begins working in a meat packing factory as he believes he won’t box again. However, Apollo Creed wants to prove his critics wrong and show that Rocky’s performance was a fluke. Now with a child on the way, Rocky has little option but to accept this big money rematch.

The Rocky series started out as a drama but quickly becomes more about entertainment full of some implausible moments. The first over-the-top yet charming moment comes during the training montage in Rocky II.

Re-creating his jog through the streets of Philly, this time children start to follow, running behind him. After going through many locations more and more kids join in until there are literally hundreds of children chasing after him. This ends with Rocky running up the Museum of Art steps once again, this time with the children following him all the way to the top which results in some brilliantly fun visuals.

While the drama surrounding Adrian’s pregnancy gives the film a soap-opera feel, it also adds some powerful moments. After the birth of their son, Adrian is in a coma and Rocky refuses to leave her bedside, he even contemplates not fighting Creed. After she awakes and talks with Rocky, she tells him she wants him to do one thing for her, “Win!”. The delivery of that one word followed by the musical queue is enough to give any viewer goose bumps. The drama of the final fight is also heightened with cutaways to Adrian being home with the baby and watching the match on the TV.

The greatest achievement of Rocky II is the final fight, which manages to surpass the original in every way. Filmed with better techniques and angles, the fight looks more intense and real. Stallone also experiments with more sound and slow-motion which results in a very dramatic showdown. The ending is extremely thrilling and a genius way to end his journey to become the Heavyweight Champion.