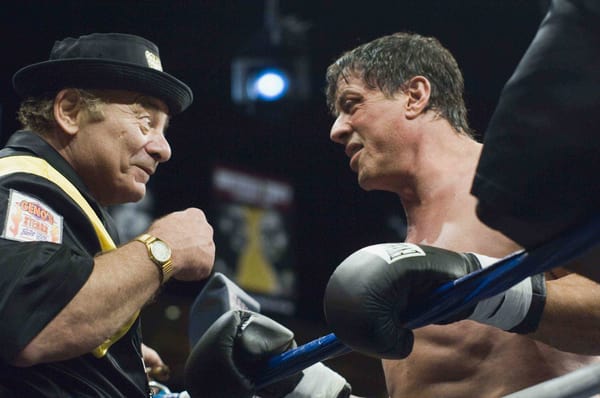 Sixteen long years after Rocky V, Stallone returned to the big screen as Rocky Balboa on December 20th, 2006, Thirty years after the original Rocky release. Sylvester Stallone admitted that he was “negligent” during the production of Rocky V leaving fans and himself upset with the way the series ended. Stallone finally convinced studios to fund the film after they realised there might be some money to be made from a nostalgic audience.

Retired boxing champion Rocky Balboa lives a simple life in Philadelphia, running his restaurant “Adrian’s” and trying to have a relationship with his estranged son Robert. After seeing a computer-generated virtual fight pitting Rocky in his prime against current Heavyweight Champion Mason “The Line” Dixon, Rocky becomes tempted to enter the ring again.

Mason Dixon and his manager issue a challenge to Rocky for an exhibition bout, a publicity act to regain Mason’s lost respect from his fans and the boxing community. To the surprise of his son and friends, Rocky agrees to come out of retirement for one final fight.

For fans of the Rocky series, there is much to celebrate and get sentimental about in this outing. Rocky would have been nothing without Adrian by his side helping him every step of the way. That’s why in the intro when the audience discovers that Adrian has passed away, it hurts the fans so much. We feel the pain and we feel for the Rocky character. The image of him sitting by her gravestone in a folding chair is a powerful image of loneliness and heartbreak.

The boxing finale looks better visually than previous films. The fight was filmed in front of a real crowd before a real boxing match took place. The first two rounds are played out in real time with the announcers present and filmed in High Definition which makes it look like a major pay-per-view TV broadcast. The fight was also more spontaneous and less choreographed than the original boxing matches, this added to the realism but also meant many real punches accidentally connected, resulting in nose bleeds and swelling occurring earlier than scripted.

Rocky Balboa is a brilliant nostalgia trip. Full of imagery and scenery from the original films and mentions of old characters and cameos. Keeping very true to the original two Rocky films. However, it also works extremely well on its own. Stallone delivers a haunting performance as a washed up boxer and there are some heart-wrenching scenes between him and his now grown-up son Robert played by Milo Ventimiglia. 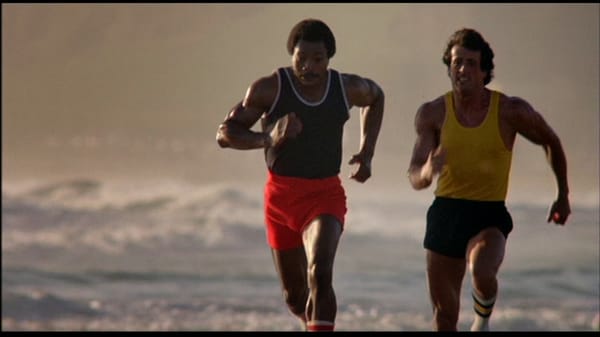 Three years after the release of Rocky II, the next instalment was released. Instead of sticking to the winning formula from the previous two films, they offer something fresh and original. Rocky is no longer the underdog trying to prove himself, he is now a successful Heavyweight Champion. Add in the charismatic antagonist Clubber Lang, portrayed brilliantly by Mr T, and a goofy but fun cameo by Hulk Hogan as Thunderlips. Rocky III was also the introduction to the iconic main theme “Eye of The Tiger” by Survivor.

Three years after beating Apollo Creed, Rocky is the undisputed Heavyweight Champion, having successfully defended his title 10 times. Now wealthy and considering retirement, Rocky is goaded into one last match against Clubber Lang. After Mickey suffers a heart-attack before the bout, Rocky is heavily distracted and loses in the second round. This results in Rocky sinking into a depression. To his surprise, Apollo takes him under his wing and helps train him for a title rematch against Clubber Lang.

As with the first two films, Sylvester Stallone based parts of the movie and Rocky’s story on his own life. This time he focuses on the elements of celebrity life and fame by showing how out of touch he has become with normality. This was during Stallone’s height of fame and many of the over-the-top celebrity moments that Rocky has to deal with are based on real experiences that Stallone went through.

Rocky’s appearance and speech appear to have slightly changed by Rocky III which shows that he is no longer just “some bum from Philly”. His character has evolved from the second film when he was awkward and shy while shooting a commercial, to now, when he revels in working in that industry and happily poses for photos from the press.

Clubber Lang is an interesting charismatic character played very well by Mr T, who beat 1200 people for the role. The part was one of Mr T’s first major roles and it was before he shot to fame as the popular B.A. Baracus from “The A-Team.” Rocky III was where Mr T coined his catchphrase “I pity the fool” which he used when he was talking about Rocky Balboa. The end fight between Rocky and Clubber is the only fight from the series that shows the complete match without jumping any rounds. 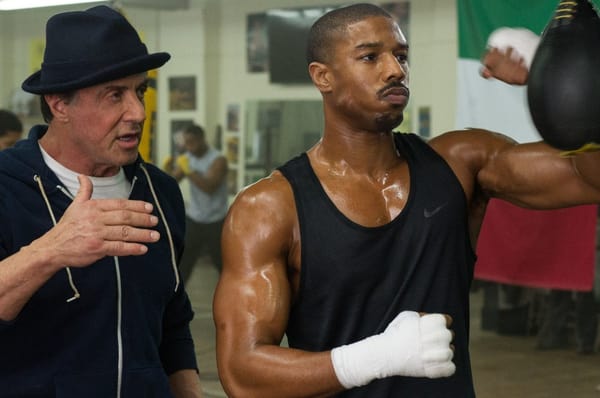 Sylvester Stallone would return in 2015 for the next chapter of the series “Creed”, but this time he would return as a supporting actor rather than the main protagonist. Starring Michael B. Jordan and directed by Ryan Coogler, both newcomers to the franchise. Opening to box office success, numerous award nominations and high critical acclaim, critics called it the best Rocky film in many years.

Adonis Johnson, the illegitimate son of the former Heavyweight Champion Apollo Creed, follows in his father’s footsteps to become a boxer. After winning fifteen “unofficial” fights in Mexico, Adonis decides to quit his office job and try to make it as a professional boxer. He leaves Los Angeles and moves to Philadelphia with the aim of recruiting Rocky Balboa as his trainer. Once they team up, Johnson’s career starts to take shape until the word leaks out that he is Apollo Creed’s son. Current world light heavyweight champion “Pretty” Ricky Conlan sees this as a money fight and issues him a challenge.

Creed rejuvenated the franchise by introducing a new character and allowing Rocky Balboa to take a back-seat. While taking a fresh approach to the series with a new lead, new director and an urban feel, they still manage to steep the film in classic Rocky imagery. Many of the locations and scenery are the same, from the streets to the boxing gyms, to the Museum of Art stairs. Old visuals have been updated such as Adonis donning a grey jogging suit for the training montage, which is a throwback to the original Rocky film but it’s been modernised as it’s now a Nike Air Jordan version he wears.

Sylvester Stallone gets to do some of his best acting in years in Creed. The character of Rocky is now old, broken down and incredibly lonely. Everyone he knows or loves has now moved on, either passed or moved away. Stallone handles this portrayal expertly as his character appears to have basically given up on life. That is until Adonis comes along and he realises that there is still purpose in his life. Stallone received high praise from critics for his role and received a nomination for an Academy Award for Best Supporting Actor, his first Oscar nomination since the original Rocky almost 40 years prior.

Creed features the finest and most realistic fights of the entire Rocky series, including a mesmerising single take two-round boxing match. They managed to pull off this incredible feat without any CGI or camera trickery after shooting the sequence twelve times. This adds to the realism of the fight and amplifies the perception of loneliness and struggles a boxer feels during a bout. The finale is also stunning, pitting young Johnson against Ricky Conlan, played by real-life boxer Tony Bellew. It’s a breathtaking, brutal, gut-punching finale with heightened drama and tension that will leave you cheering on the new underdog. 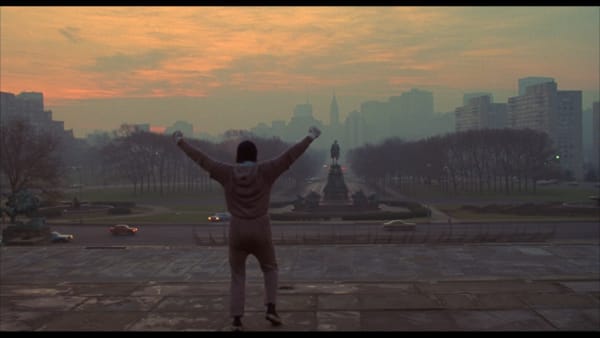 Rocky debuted in 1976 to become the highest grossing film of the year, earning $225 million at the box office compared to its $1 million budget. The film received positive reviews from critics and went on to win 3 Academy Awards including Best Picture and Best Directing. All of this from a then no-name actor and writer who gave everything he had to make sure his film was made.

Rocky Balboa, a struggling small-time boxer from the streets of Philadelphia, is chosen to take on current World Heavyweight Champion Apollo Creed, because of his nickname “The Italian Stallion.” The opponent is chosen as an easy fight for Creed but Rocky, mentored by his trainer Mickey Goldmill, gives it his all for his true shot at glory. During training, Rocky’s relationship with local girl Adrian, the sister of his good friend Paulie, starts to blossom.

Sylvester Stallone wrote the script for Rocky in three and a half days after witnessing Chuck Wepner versus Muhammad Ali. Wepner lost by TKO in the 15th round but nobody had expected him to last as long as he did. That inspired Stallone to write a story based on an underdog boxer. United Artists liked the script but wanted to use an established actor in the main role. Stallone appealed to producers to star and they eventually caved as long as they could keep the budget low.

The low budget didn’t always hinder the production as some of their choices actually added more charm to the story. The ice-skating date with Rocky and Adrian took place in a regular ice rink after-hours with Rocky bribing a janitor to let them skate. This was originally meant to be filmed on a normal ice rink during the day but they couldn’t afford to pay for extras.

The same is true for the famous montage which was filmed rogue style with no permission for most of the locations they shot at. There were also mistakes in the props department such as Rocky’s robe being too big. There was no chance to replace the robe, so they had Rocky’s character point out that the robe was too big but he wore it anyway.

One of the first few films to use the Steadicam was the original Rocky. The new camera technology was used to create the shot of Balboa running up the steps of the Museum of Art, which became the most famous scene of the film. The Steadicam was also used during some of the filming during the final boxing match.

Rocky is actually less of a sports drama and more of a character study. The character of Rocky may seem a little shy and slow, but it’s charming to watch him try to woo Adrian or offer people advice or just try to be a good person. The film focuses on an average man that isn’t well educated but he gets one chance to give everything he’s got, to prove to himself and everyone else that he is worth something.

Author Bio: Craig Nixon is an Asian film critic from Glasgow, Scotland. He is also a fan of the films ‘Cannibal Holocaust’ to ‘Mean Girls’ and everything in between. Follow his Asian Cinema blog www.temptasianfilm.blogspot.co.uk.