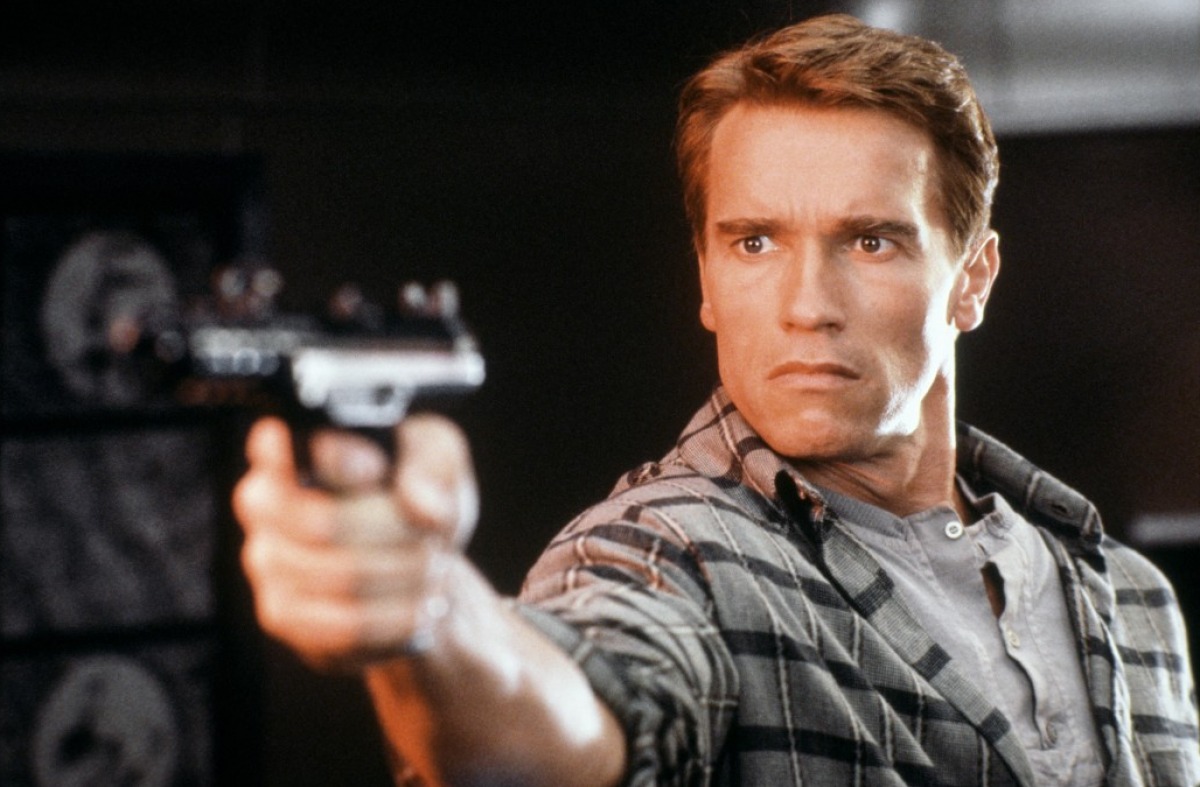 With Elle marking the comeback of Paul Verhoeven after being semi-retired and the United States shifting into stranger and stranger times, Verhoeven’s world view feels more relevant than ever. Looking back at a career that produced some of the biggest films of the 80s and 90s, it would be easy to chalk Verhoeven up as a schlock extraordinaire; but with the 90s now part of the distant past critical re assessment of Verhoeven’s work has been on the rise for some time.

Jonathan Rosenbaum would make a rare critical 180 from calling Basic Instinct worthless to listing it among his favorite films. Even more astounding is Jacques Rivette would hail Starship Troopers as superior to Jurassic Park and compare Verhoeven to Roy Lichtenstein. Even the utter madness of Showgirls was the subject of a round table discussion by Film Quarterly.

Even before Verhoeven was confounding American audiences with three breasted aliens and cheeseburger obsessed strippers; he had a long career in his homeland producing films of unironic acclaim. If Verhoeven had never come to the United States, his filmography would still be a revelation. But paired with his output in the States his 16 features make up one of the most puzzling bodies of work by and filmmaker of any generation. 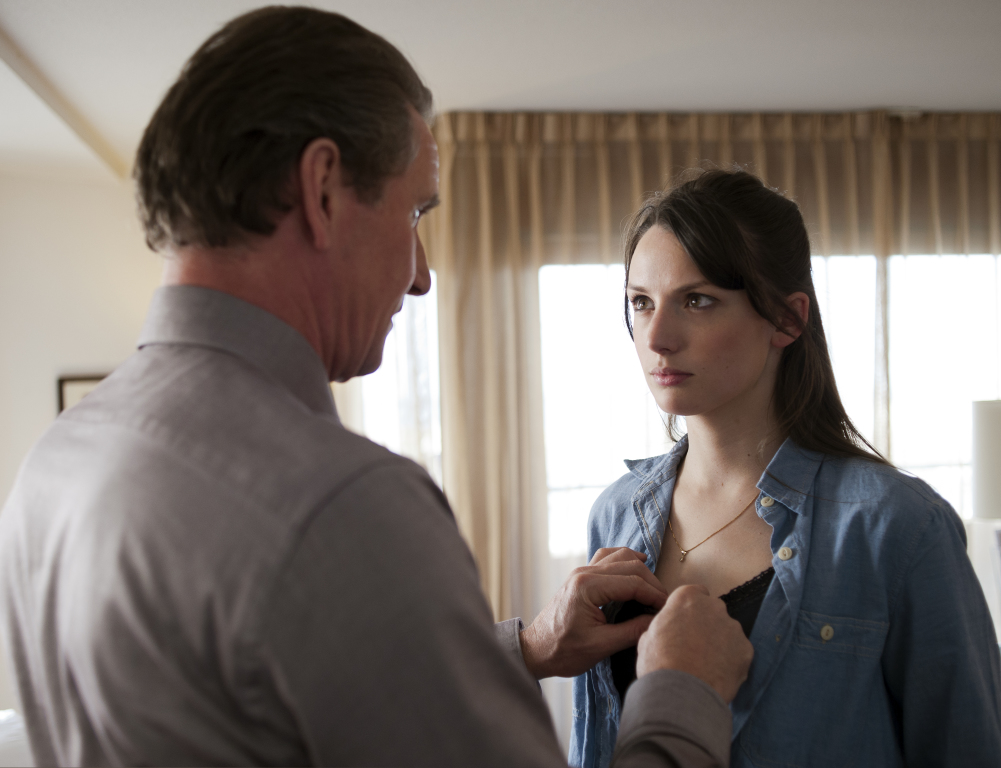 Verhoeven’s Tricked, an experiment in audience participation is perfectly watchable. In the off chance that anyone’s never seen his other work Tricked would be a decent intro to his career. Sadly, given that the script was compiled from the input of audience members, the results should have been more exciting. The plot revolves around a wealthy family coming to terms with the other member’s affairs and deceptions. It’s funny enough without offering much new.

Tricked is a brisk 50 minutes, but is paired with a less than illuminating documentary surrounding the film’s conception. Paul Verhoeven is one of the best talkers in the business, often offering elaborate explanations for his most bizarre decisions as heard in many of his commentaries.

In the making of Tricked he mostly only discusses how he is interested in where the process will eventually take him creatively. With that in mind, Tricked is still worth watching as the director’s first foray into to domestic life and serving as a warm up for Elle. 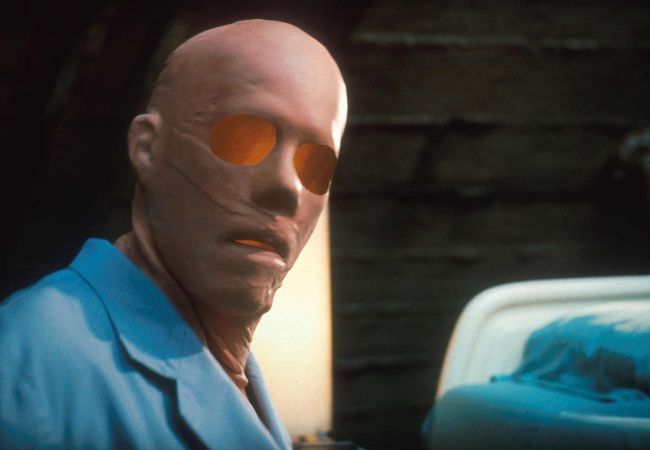 What should have been Verhoeven’s grand farewell to his run of films in Hollywood is his most mean spirited, also his least memorable. Hollow Man works best as sort of enigma, an oddball among horror films of the early 2000’s when the genre was dominated by slasher sequels. A big budget modern take on the H.G. Wells classic piles on nastiness, but cuts back on the sense of humor.

The protagonist morphing into an invisible rapist could have been subversive take on workplace drama (Kevin Bacon and Elisabeth Shue’s past romance is referenced in almost every scene) but the one note script limits Kevin Bacon’s performance to just a bitter ex. While most of Verhoeven’s films establish worlds where grime/ violence is the norm; Hollow Man’s streak of sadism towards women and animals feels jarringly out of place.

The film’s saving grace are some solid performances from Shue, Josh Brolin and Bacon who seems to be channeling more of Bela Lugosi’s theatricality than Claude Raines’ voice. As well as some stylistic scenes of violence, many of which play like Verhoeven’s take on some of Hitchcock’s more picturesque murders from Torn Curtain and Topaz. 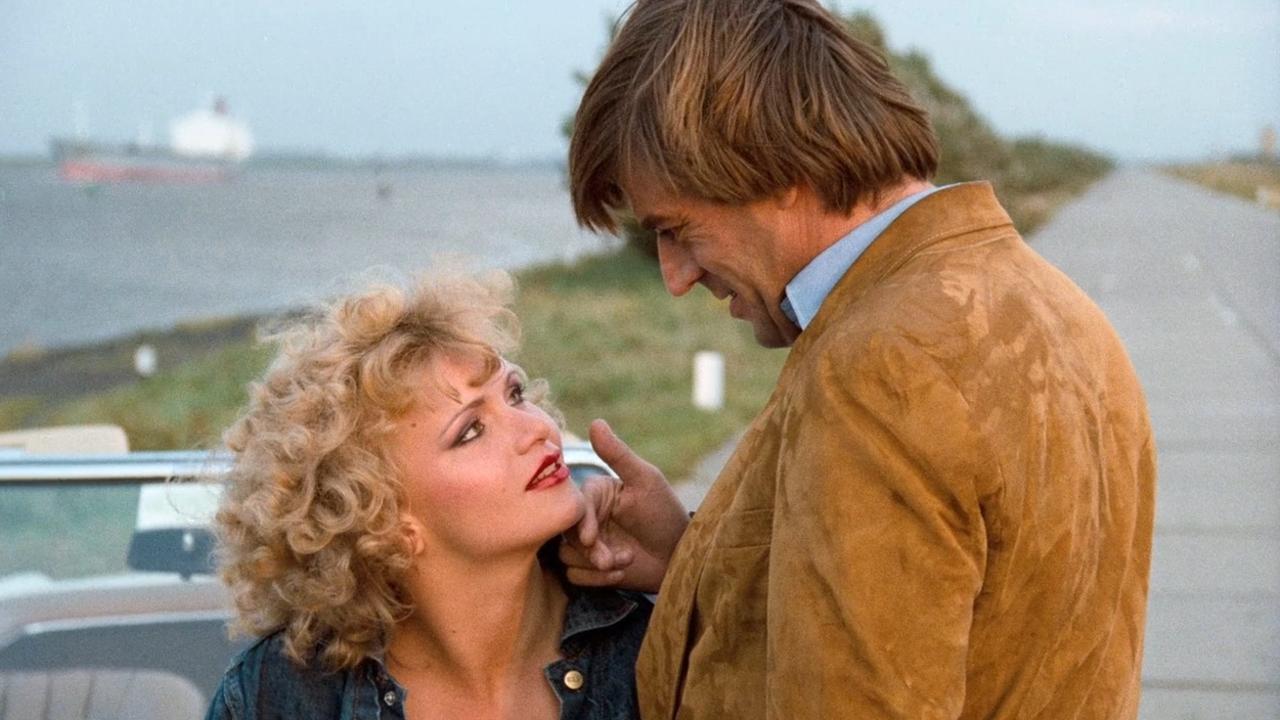 Rightfully, Spetters is among the lesser known entries from Verhoeven’s Dutch films. Coming of age probably is not the first genre anyone would associate Verhoeven with; he’s quoted saying he took the film on as an opportunity to work with a young cast on a very angry film. It’s evident this was more a subject he was passively curious about. The movie tackles the story of three friends as well as their budding sexuality, and handles some of the arcs better than others.

As inconsistent as Spetters can be, Verhoeven knocks the movie’s constant dick jokes out of the park and one of his greatest female characters is an independent woman who runs a sausage stand. Unfortunately, one of the main character’s coming to terms with his own homosexuality is handled in an especially awkward fashion that will leave most audiences scratching their heads.

The motorbike storyline especially feels like a missed opportunity for a fast-paced narrative and perhaps this was meant to be subversive since the film takes a tragic turn. Rutger Hauer has his smallest role in a Verhoeven movie as an admired professional biker who sadly falls to the background; further evidence that maybe the director’s heart was not in this one. 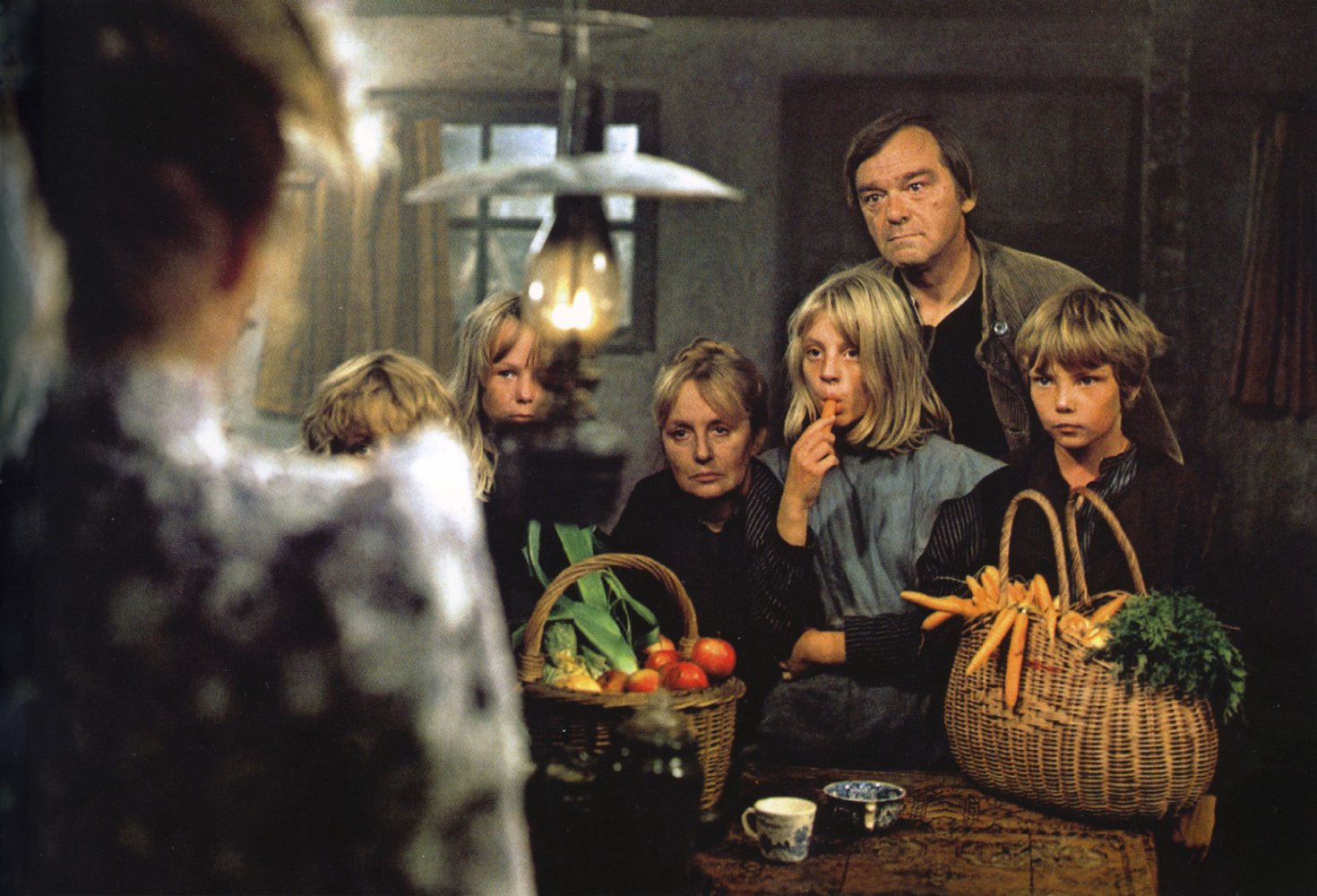 Verhoeven has stated he would like to have re made this film, even though Katie Tippel was graced with the largest budget in Dutch cinema at the time. The lavish production values still make it more entertaining and glossy than whatever Oscar bait Tom Hooper is directing this year; still Katie Tippel feels undercooked. An altogether successful character study anchored by an excellent central performance from Monique van de Ven.

The story of an opportunistic young woman’s foray into prostitution is notable for how Verhoeven tackles sexual politics. It’s not as simple as Katie falling into prostitution but about her never being able to enter high society’s good graces, always finding herself in the middle and always latching on to the next best thing.

Rutger Hauer is back again turning in an unexpectedly charming performance. The technical aspects of the film are all on point, but Verhoeven’s signature bite is missing. At its best Katie Tippel plays like a Paul Verhoeven movie for people who hate Paul Verhoeven. 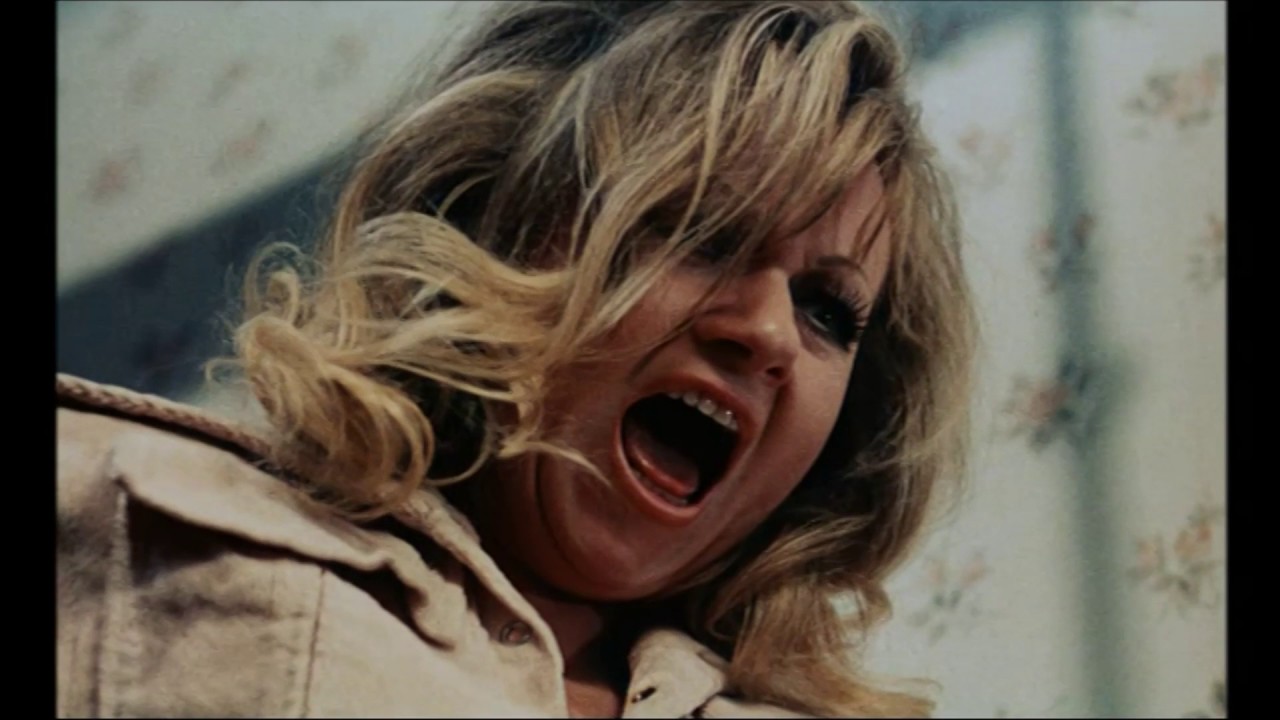 One of the most unsung debuts for any filmmaker. The movie is a simple story of two prostitutes; Greet is a seasoned veteran and Nel hopes to eventually graduate to civilian life. Verhoeven does not spend the film moralizing, instead he invites the audience to laugh not at the heroines’ misfortune but at the ridiculous devotion to keeping their clientele satisfied.

Verhoeven fully commits to bringing each client’s fantasy to life, especially a gentleman with a surgery fetish. The younger Nel’s domestic strife with her boyfriend plays out like a Tex Avery cartoon. The energy that Verhoeven exudes in his first feature seems like he was more on track to be the next Frank Tashlin.

With most of his prominent work being from the 90s, it’s easy to forget how long Verhoeven has been in the game. His 1971 debut is as ambitious and outside the box as almost anything that would come out of New Hollywood during the same period. Business is Business would make an especially great double feature with Bunuel’s Belle de Jour.

Maybe Basic Instinct is ranked too low for being arguably Verhoeven’s most widely seen, but it is difficult to rank because it is a film that succeeds almost despite itself. Sharon Stone’s career defining turn as Catherine Tramell needs no defense, but the moments that try to establish her as dangerous are exactly what date the film. Screenwriter Joe Eszterhas repeatedly reminds the audience how much Catherine likes the F-word to equate her with dangerous sex.

What does hold up is not the suspense but just how hysterically aggressive Michael Douglas’s Nick and the other men are. Viewed today the film feels less about Catherine as a black widow and more about the lengths Nick will go to keep playing with her. Verhoeven regularly talks about brushing up on Hitchcock before a new film; though most of the references here feel surface level.

The approach here is for the better, since so much of Basic Instinct plays with audience expectations. One of the movie’s weirdest motifs is associating modern art with something sinister. In short, Basic Instinct is a big melting pot of elements the audience should find enticing repeatedly pushed to the point of absurdity. 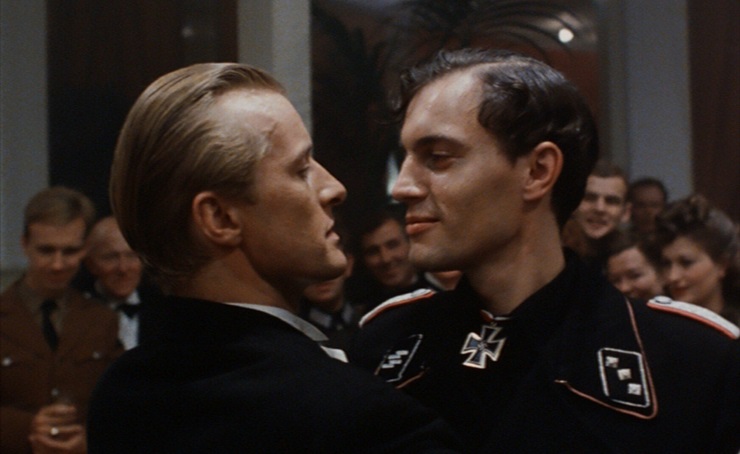 Among the most acclaimed of Verhoeven’s films from the first half of his career, Soldier of Orange is an odd duck in that it is an immensely accomplished picture that might not even feel like one of his films on first viewing. The story involves a group of students headed up by Rutger Hauer (again) and their trials and tribulations experienced during World War II. It was the most ambitious narrative the director had explored and the one closest to his own upbringing.

Some characters join the resistance while others ally with the Nazis. The novelistic structure feature some segments that are better than others but for the most part Verhoeven’s trademark absurdity finds its way in and turns Soldier of Orange into a highly unconventional war film made up of smaller moments.

Verhoeven achieves a youthful energy with the coming of age aspects, including opening with some bizarre rites of passage. The violence is limited to short surreal bursts, some characters are briskly dispatched while some deaths are set up like punchlines. One of the nicest most subtle touches is the movie’s uncharacteristically tender approach to sexuality where the sex scenes play like quiet escapes from the war. Most remarkable is that Soldier of Orange ends up being one of his most optimistic works. 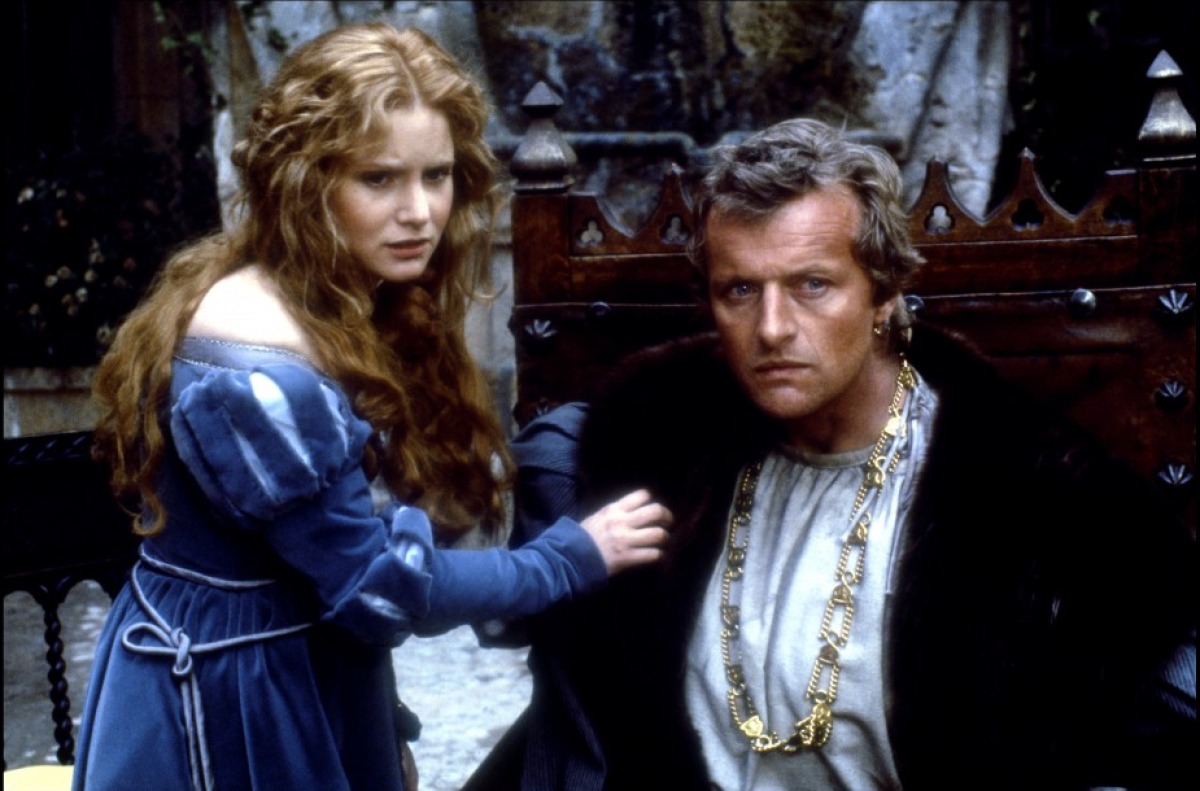 For all Flesh + Blood’s troubled production (it’s the film that ended his long partnership with Hauer) it plays like one of Verhoeven’s most unhinged visions, a film full of characters doing nasty things but with the beats of a comedy. Hauer’s team of medieval mercenaries justify their repeated atrocities believing their ordained by god, and Hauer’s Martin is introduced shoveling communion wafers into mouth like potato chips.

Verhoeven has a gleeful time turning the trope of heroic knights upside down and even more fun crafting Jenifer Jason Leigh’s Agnes a victim of Stockholm Syndrome into the unsung hero of the film. Every character in Flesh + Blood is acting in their own interest.

Verhoeven’s usual motifs run rampant, invoking religious idols in the midst of carnage almost blasphemously and sometimes as part of an elaborate death scene. Verhoeven’s knack for history also comes into play where the most rationale character, a man of science arguing against many of the dark age philosophies is repeatedly beaten and ridiculed.

One negative aspect of the film is that Verhoeven’s abilities to direct action don’t feel as on point as they would in Robocop but rewatching it; perhaps that is to the film’s benefit that most of the sword fights (or just murder in most cases) have a messy quality to them.