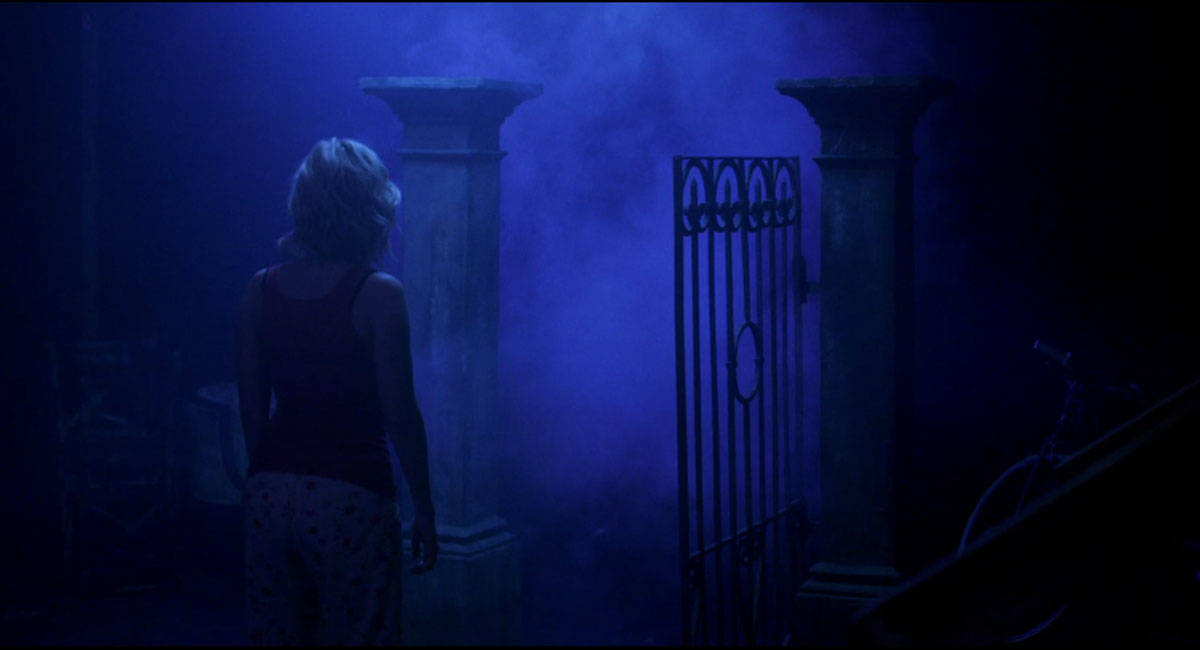 This one is a strange little film, focused mainly on paying homage to ‘80s horror/family nostalgia films, as initially evidenced by its poster. The plot revolves around two estranged brothers (one of them joined by his girlfriend), each with their own separate dysfunctional lives, who come back to their father’s house to go through his belongings after considering him dead, given his seven month disappearance and less-than-crystal clear past. They discover that the last thing their father watched was a videotape as part of a mysterious board game called “Beyond The Gates”.

The homage kicks in firstly with the inclusion of the VHS board game itself, a short-lived yet very unique idea of the ‘80s – the players followed the instructions on the tape, usually badly acted, to progress in the gameplay – but also kicks in with who stars in the instructional tape. It is none other than Barbara Crampton, who earned the crown of Scream Queen in “Re-Animator”.

From there, the brothers and girlfriend have to go on a supernatural and gory adventure to help the dad, who is somewhere “beyond the gates” of the game.

The cult factors here are mainly how old-fashioned and nostalgic the film feels as an homage to productions and styles of the 80s, complete with strange lighting, a magical score, themes of familial alienation, the effects of the absent father figure, the effort to reconnect via a dangerous adventure, as well as its indie nature – one can tell that the crew had to spread their budget thin, even for the short span of 82 minutes, which is the duration of the film (charmingly listed in genre categories as a horror-comedy). 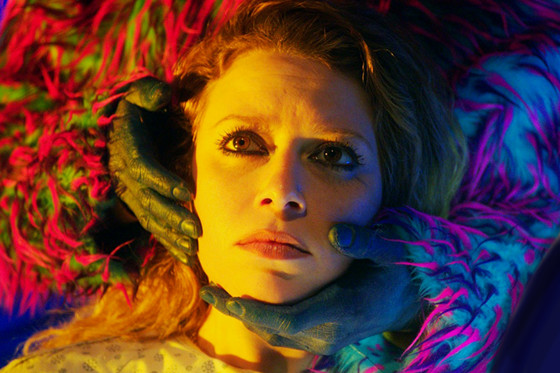 After “The Greasy Strangler”, this film is probably one that needs a strong stomach to handle. Filled with body horror and gross, colorful drug-infused imagery, Danny Perez’s little festival offspring is certainly something that can accumulate cult status as time goes on. Natasha Lyonne stars as a “live fast die young” type of small-town party girl, until one day she begins showing symptoms of pregnancy, only to claim that she has not had intercourse in months.

The film then goes on to explore the underlying fear of pregnancy and the changes it causes in the female body, coupled with the loss of control and autonomy one may feel when with child. But that’s as far as it goes logic-wise, since soon everything turns strange and dreamlike, and our protagonist/unreliable narrator does nothing to help clear things up through her drugged perception.

The movie explores said themes, rounded up with a healthy dose of sci-fi mystery, in the most unorthodox and gross ways; it doesn’t shy away from secretions, creepy furry human-sized creatures, bright colors, and an at times hilarious dialogue between the characters of Lyonne and Chloe Sevigny, who co-stars as Lyonne’s best friend in the film.

The entire movie feels like something out of early Cronenberg on drugs, and that alone can be a testament to its cultish potential. If you enjoy and can handle a good dollop of fluids and body horror, check it out.

Weirdness factors: a Polish film about teenage flesh-eating mermaids, with a taste for male prey, who work as strippers in a nightclub during the ‘80s, flush with musical numbers. This is one of those beautiful cases of absolutely strange films that could go horribly wrong, and yet they work.

The story begins in 1980’s Poland, when the two mermaid sisters Silver and Golden go on land, entranced by a musician, and are hired at a nightclub. Where Silver has a hard time feigning humanity and resisting her flesh-eating tendencies, Golden desperately tries to seduce a musician at the club and be accepted by him as a human love interest.

Just like its genre, it’s hard to pinpoint exactly why the film works, apart from the amazing production design work and the groove that obviously went in the musical sequences, settings, and colors.

Part of the film is a dark Little Mermaid, part is critique on gender issues, as illustrated by Golden’s attempts to deny herself in order to catch her beloved’s eye and by how the girls subvert their underpowered position as strippers, and another bit focuses on the general theme of finding one’s footing in an exploitative world and growing up.

There’s so many things jammed into these 90-something minutes, and while it doesn’t always work in the film’s favor, it’s an absolutely unique work that deserves its future cult fame. 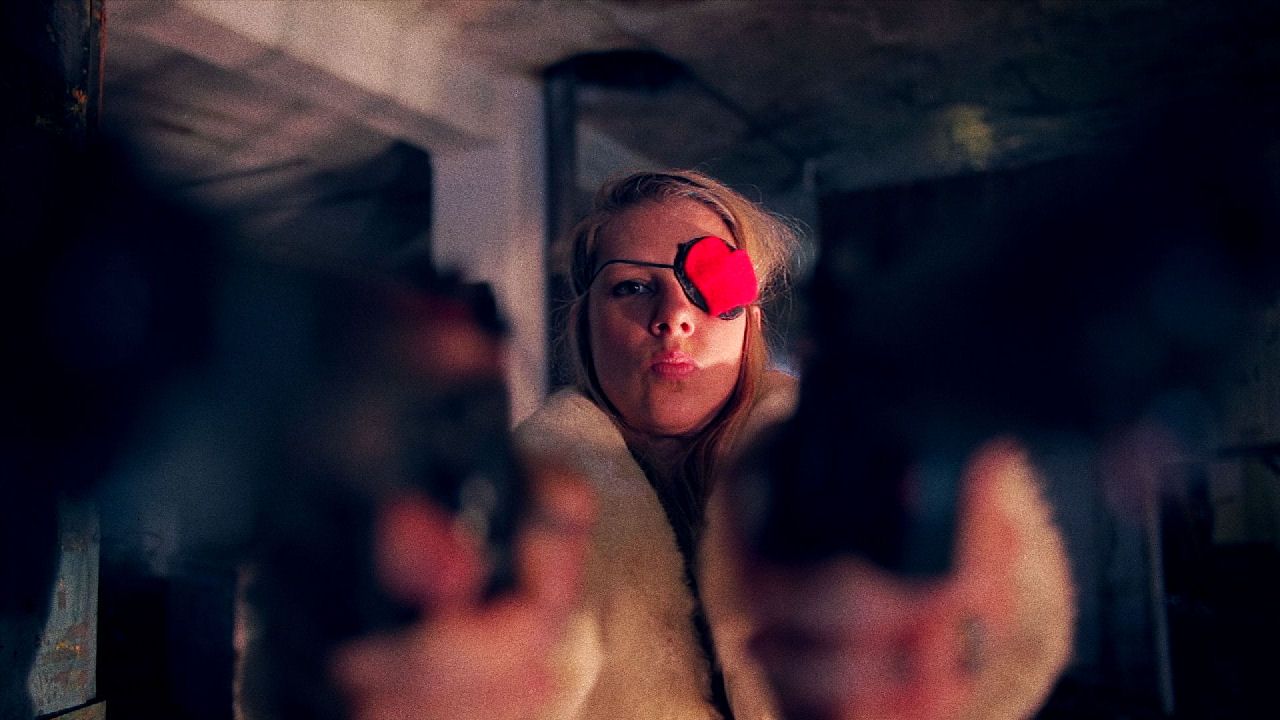 “She Kills” is one of those movies that knows what it is doing and why it’s doing it, and its self-awareness works in its favor precisely because of how outrageous it is. Writer and director Ron Bonk mainly makes horror films and has been doing so for the past 25 years, contributing to the underground and obscure film scene, but “She Kills” was his love letter to exploitation and grindhouse flicks from the ‘70s.

Made using a minimal budget, it stands proud in its campiness, with terrible over the top performances, voice-over narration, throwback color schemes, villains with absolutely breathtaking face and chest hair patterns, and gratuitous, exploitative, unrealistic violence. And it has a killer (pun unintended) poster to boot.

As for the plot? The story follows Sadie, a once happy virginal soon-to-be-wife, whose life is ruined violently by a gang called “The Touchers”. Sadie vows revenge, and plans to extract it by using her genitalia, which have –and this is not a drill- been chosen by none other than Satan to carry a demonic, STD-like disease, which turns men into feral beasts and more! Of course, after she gets revenge, Sadie plans to get rid of her “Fire-Crotch” (that’s indeed how she calls it) by performing a Space Exorcism.

The film even pays homages to other films, such as “The Crow”, a movie with its own cult status. Granted, it will not be for everyone. It’s unabashedly over the top in paying respect to the cult gems of the ‘70s and fun in every way, as long as one opens themselves to the ride.

Author Bio: Sofia studies Law in a small frozen city in the north of Greece, and will hopefully graduate by the end of the year. She wishes she could learn everything there is to know and really, really, really likes films. Sometimes she even scribbles a line or two about them.