Dialogue should do at least one of two things, advance plot and establish characters. A screenwriter uses more than conversations between characters to do that. Dialogue gets more recognition than any other element of a script because it is the writing that translates to the screen, but a script is more than the characters’ words.

It is the document that every artist of the filmmaking process uses to create his or her piece that contributes to the film. A script is the film’s action and plot. It creates the characters and the narrative spirit that breathes life into the film. Considering that film is primarily a visual medium, characters’ action and imagery are essential tools in creating and advancing a narrative.

An absence of dialogue can often be a more effective way to advance a story. Elements of a film’s narrative are encoded in mise en scene (a French term that loosely translates to “things on the screen) of every image, every shot, and every frame. Writers use a narrative structure in their scenes in which action reveals character and plot, and a pacing that creates the tension that keeps the audience engaged. 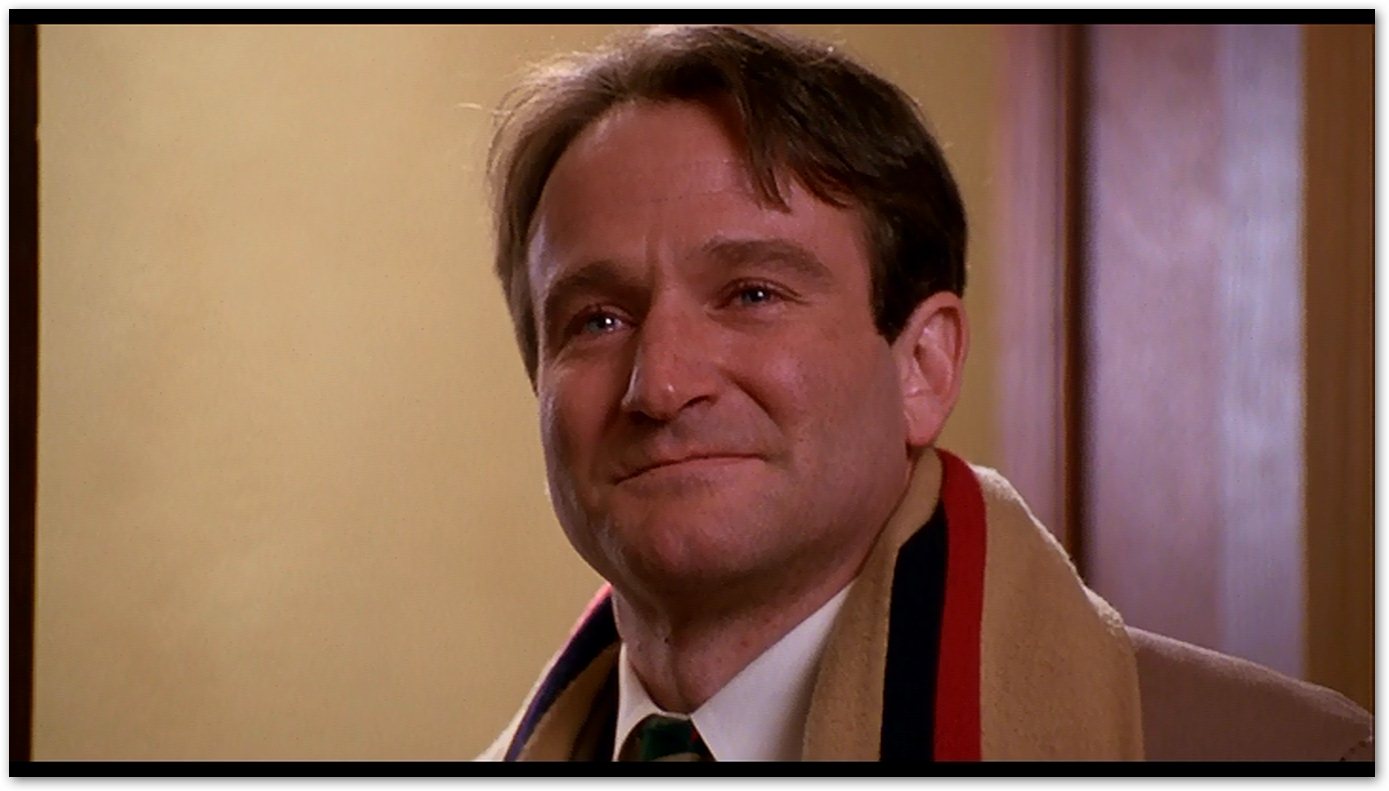 The Movie: In this classic coming of age tale screenwriter, Tom Schulman, uses poetry to establish the theme of the importance of passion in life with the protagonist, John Keating (Robin Williams). He is an English professor and poetry enthusiast who uses the words of Whitman, Frost, Thoreau, and others, along with free thinking to set his prep students free from their rigid path toward elitism.

Keating inspires a group of students to reform The Dead Poets Society, a secret society he founded when he attended Welton Academy. He gifts Neil Perry (Robert Sean Leonard), an old copy of “Five Centuries of Verse” with a Henry David Thoreau passage handwritten on the title page, and the instructions “to be read at the opening of Dead Poets Society meetings.”

The Dead Poets Society inspires Neil to audition for a play despite his father’s objections. When his father learns of Neil’s role in the play, he tells Neil that he will be withdrawing Neil from Welton and enrolling him in military school. Sick with the grief of being forbidden to pursue his dream of acting, Neil commits suicide.

The Scene: The morning after Neil’s death, Keating is sitting in his classroom, alone, as snow falls outside the window. He walks over to Neil’s desk and pulls out the copy of “Five Centuries of Verse”.

Keating opens the book to the title page and the camera rests on the Thoreau passage long enough for the audience to read it. “I went into the woods because I wanted to live deliberately… I wanted to live deep and suck the marrow out of life! To put to rout all that was not life… and not, when I came to die, discover that I had not lived…”

The camera cuts to a shot of Keating sobbing, uncontrollably, with the passage open in front of him.

Why It’s Well Written: This scene calls attention to the film’s theme of passion, particularly with the phrase “I wanted to suck the marrow out of life,” a phrase that Keating and The Dead Poets use to verbalize the mission to live as free thinkers. It does so by “reciting” poetry, a narrative device used throughout the film. This is a unique instance where writing, other than dialogue, makes its way onto the screen. And in this instance the words hold more power as a handwritten image on the tattered page than as spoken words.

The words Keating wrote, decades before, give insight into his character in the present. It recalls his motive to inspire his students to “make their lives extraordinary.” The words move him to tears: tears with layers of emotions behind them. They reveal the passion that poetry evokes within him, and reveal his deep connection with his students. He is grief-stricken over the death of a beloved student, and feels a certain level of guilt for that death.

Keating ignited the fire within Neil to pursue his passion of acting. Due to Neil’s father’s stance on pursuing acting, it is that passion that leads to the suicide. Keating is caught in a storm of emotions in which he is realizing the dark side of the passion he preaches. That is established with the image of the handwritten Thoreau passage, followed by the image of Keating crying.

The Movie: One of the most inventive movies to ever come out of Hollywood, Toy Story, Pixar’s first feature length computer-animated film, has a script featuring self-aware toys. All but one of them, Buzz Lightyear (Tim Allen).

Andy’s room’s newest toy, Buzz, believes that he is an actual space ranger, despite Woody (Tom Hanks) insisting, over and over again, that he is just a toy. Buzz doesn’t question his perceived reality once during the film, until he’s lost while trying to escape their sadistic neighbor, Sid’s, house.

The Scene: After he and Woody split up, Buzz finds himself in Sid’s Father’s den. Sid’s Father is snoring while passed out with the TV on. A commercial for Buzz’s toy plays, and when a disclaimer stating “not a flying toy” plays at the end of the commercial Buzz realizes, for the first time, that he is only a toy.

Buzz wanders back out into the hallway, distraught in his existential crisis. A flock of birds fly by while he’s staring out the window, and Buzz rejects his recently learned identity. With a determined look on his face, he climbs up to the bannister of the balcony, poised to defy the disclaimer at the end of the commercial.

When he leaps there are a few hopeful moments where he’s gliding toward the window. But gravity starts to drag him down, and when he crashes to the floor his arm separates from his body. He lies there without any doubt that he’s just a toy.

Why It’s Well Written: The action in this scene unfolds at a varying pace. The loud commercial zips by in a flash. Then the pace slows, mirroring Buzz’s melancholy state. His soul-searching stroll into the hallway gives the audience time to feel sorry for the once arrogant toy in his vulnerable state.

The pace quickens when he climbs the bannister to launch his flight. In this moment tension is created with the question of if he’s going to jump, and what’s going to happen to him when he does. And after the brief moment of hope at the beginning of his leap, the tension is released with Buzz’s inevitable fall, and the audience comes crashing down with Buzz, and lies with him as they process the seismic shift in his character.

Joe dies in the dead of winter, while the ground of the cemetery in which he wishes to be buried is frozen solid. His corpse rests in the freezer of a morgue until the ground thaws in the spring.

Of course Patrick is saddened by his father’s death but refuses to express the full extant of the emotions of his immense grief. However, he does explicitly express that it upsets him that his father’s body will remain in a freezer until spring. It upsets him to the point where he suffers a panic attack when he opens his own freezer in a prior scene.

The Scene: A few months have passed since Joe’s death and winter’s wrath has softened over Manchester. Patrick is walking along the sidewalk that runs parallel to Rosedale Cemetery. He picks up a stick and clinks it on the wrought iron fence that divides the cemetery from the street. He turns into the cemetery and tries to jam his stick into the soil to check if it is soft enough to dig a grave. But the ground is still frozen.

Why It’s Well Written: Just as the soil is still frozen in winter, Patrick is frozen in the winter of his soul, still mourning the loss of his father. Kenneth Lonergan establishes the character development to create that metaphor far earlier in the movie, by showing Patrick’s anxieties about his father being in a freezer.

With this brief scene, he uses the season of the film’s setting and Patrick’s actions to establish theme and character. Patrick has yet to overcome his anxieties about the resting place of his father. This seams like it doesn’t advance the character or the plot, but it is a representation of the ideology the film expresses: some traumas are too great to overcome.

The Movie: John Hodge brilliantly scripts this twisted, dark, absurd comedy that depicts heroin addiction. He uses voice over narration to weave Irvine Welsh’s prose, from his novel of the same name, into the film. This stylized British comedy follows the antics of heroine addict, Mark Renton (Ewan McGregor).

The Scene: “Heroin makes you constipated and the heroin from my last hit is fading away and the suppositories have yet to melt. I’m no longer constipated.” That is the voice over narration just before Mark cringes from the pain of imminent diarrhea.

He runs into an off-track-betting site where he’s directed to the bathroom in the back. He walks down a hallway and through a door with a sign reading “toilet” hanging from it. Before the camera follows mark into the bathroom, and the words “worst” and “in Scotland” appear on either side of the sign that reads “toilet.”

It doesn’t take more than half a moment of contemplation to reach in and retrieve them. He reaches deeper and deeper into the brown water, until his entire arm is submerged, and then his head, and then his entire body, and then the camera dives with Mark into a crystalline ocean. He picks his suppositories from the ocean floor and reemerges to the surface, elated, and climbs out.

Why It’s Well Written: In this scene, writing appears on the screen without the use of dialogue, and achieves an effect that dialogue can’t. The appearance of the words lends itself to the absurd nature of the film, along with diving into a toilet that morphs into a clear ocean. The purity of the water is meant to represent Mark’s perception. He doesn’t notice the putrid shit in the water because he’s retrieving the only thing that could make him happy at the moment.

A secret weapon of the screenwriter is determining the location of each scene, and John Hodge does so masterfully in this scene. Cinematic devices such as mise en scene rely on a scene’s location. Mark is in one of the most desperate moments of his addiction.

He is sticking suppositories up his ass to get high, and a river of diarrhea is knocking on his back door. His desperation for his fix pushes him to reach his hand into the toilet full of his (and probably others’) diarrhea. The grotesque mise en scene of the bathroom is meant to mirror the gruesome nature of Mark’s existence at that moment.