4. The Mix of Realism and Surrealism

I mentioned in the introduction how Charlie Kaufman describes his desired project in “Adaptation” saying: “What if a writer is attempting to create a story where nothing much happens, where people don’t change, they don’t have any epiphanies, they struggle and are frustrated and nothing gets resolved.

More a reflection of the real world.” One would think that such a movie would be pretty simple, production-wise. Real locations, amateur actors, direction and simple plot, etc. Something the Dardenne Brothers or the founders of Dogme 95 would make. Kaufman’s vision behind the quoted statement is quite the contrary.

“Synecdoche, New York” displays a sort of surreal realism. The director wanted to make the audience feel what Caden was experiencing and he used every narrative resource he knew in order to achieve that. Months passing by seamlessly as evidenced by scattered dates on various objects.

An actor aspiring to play Caden is able to say to Hazel exactly how the protagonist really feels about her, when the original Caden never could. Caden’s dad being buried in a minuscule coffin because “there was so little left of him.”

Caden having to use a translation device in order to speak with his daughter Olive after she had completely forgotten English since moving to Germany; then, when she dies, her full-body tattoo, that used to portray an array of red roses, has rotten, and a purple petal falls in Caden’s hand.

Somehow, “Synecdoche, New York” feels more like real life than most movies. Using surrealism to portray an experience more accurately is a wonderful filmmaking technique that Kaufman clearly mastered a few of his scripts ago. 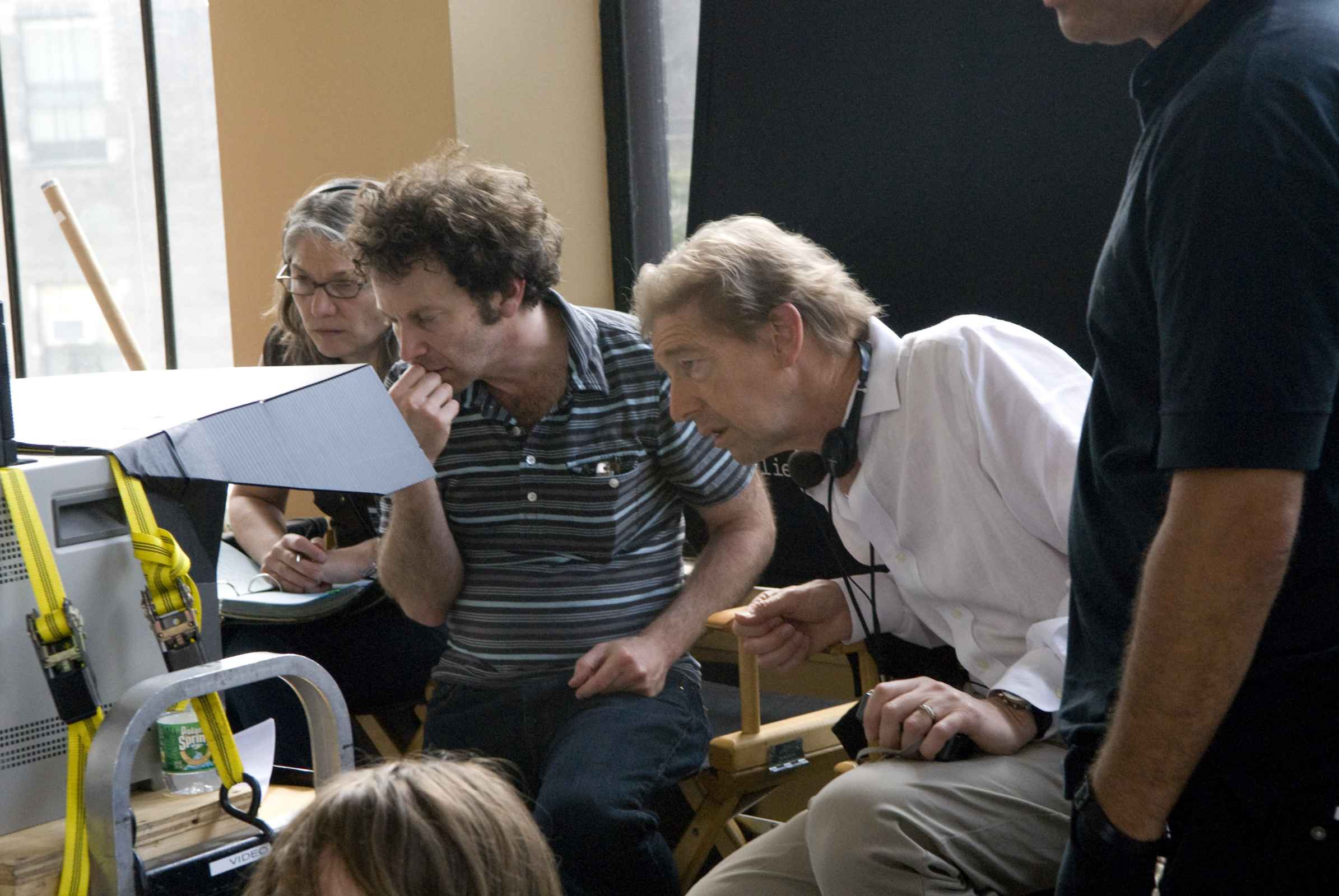 A director is responsible for the overall quality of a film. He has to coordinate the many departments involved in making his vision become reality. As scale goes up, the job becomes more difficult, and in the case of “Synecdoche, New York”, it reached crazy levels of complexity.

Kaufman’s script for “Synecdoche, New York” is as excellent as it is complex. Hundreds of details are scattered all over the place. Bizarre performances are born of altered mental states. Characters live full lifetimes over the course of its running time. Kaufman basically created his own massive theatrical simulacrum and called it a movie. The director even wrote the lyrics to the songs portrayed in the film.

In an interview, Kaufman said that he structured “Synecdoche” to feel like a dream. It contains twice more scenes than the average for its running time. Events are scattered and seem to happen suddenly, giving the audience no time to prepare.

For these reasons, I’m convinced Kaufman was the only member of the team that knew what kind of movie “Synecdoche, New York” was going to be, yet he was extremely successful in communicating what he wanted from each crew member, from actors to set designers, and that’s what directing is all about. 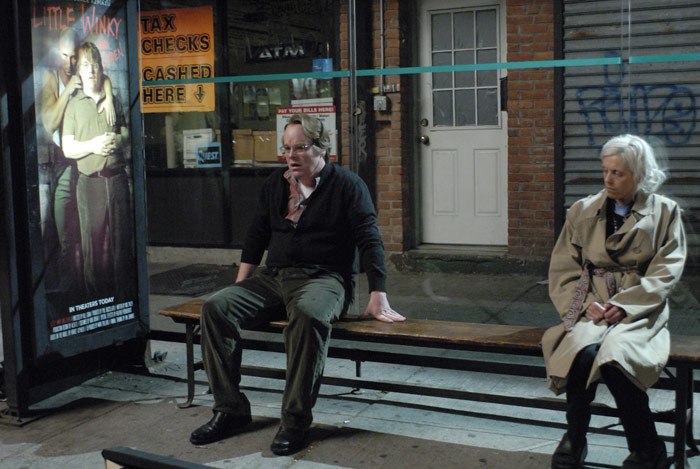 Philosophy is called “the mother of all sciences” because it essentially is a reflection about existence; a logical interrogation humans perform toward their environment. Caden tries to do something like that with his play, but he ends up falling into solipsism, a belief that states that the only mind that really exists is one’s own; everything else is unreliable or plainly untrue.

Beyond specific theories or symbolism, Caden’s deepest insight on humanity comes at the end of the film. All his life he has been focused on his own misery, his own problems, and his own perspective of the world was the only one he viewed.

Over the course of making his play he starts playing a character, a rather minor character, the cleaning lady of his ex-wife, called Ellen Bascomb. By doing this he realizes that each human is the main character in their own story. She was merely a small character in Caden’s play, but she had her own problems, desires, frustrations and reflections as he did.

The main character’s final conclusion is basically what Roger Ebert describes in his review of the film: “Here is how life is supposed to work. We come out of ourselves and unfold into the world. We try to realize our desires. We fold back into ourselves, and then we die.

‘Synecdoche, New York’ follows a life that ages from about 40 to 80 on that scale. Caden Cotard is a theater director, with all of the hangups and self-pity, all the grandiosity and sniffles, all the arrogance and fear, typical of his job. In other words, he could be me. He could be you. The job, the name, the race, the gender, the environment, all change. The human remains pretty much the same.”

Kaufman used Caden Cotard as his subject for a sort of philosophical experiment to prove that all humans live essentially similar lives. We’re all together in this existence and none of us absolutely understands it. Two people can appear completely different on the surface, but if we really got to fully know them (a thing that the movie claims is actually impossible to do) we would see that their pains, regrets, hopes and vulnerabilities are actually very similar to ours.

All of these reflections are surrounded by death, the unshakable promise of not existing. How can one live happily knowing how easy it is to die suddenly? To forget everything and be forgotten by everyone? Thoughts like this one bother Caden Cotard everyday of his life.

Charlie Kaufman started off as a prolific writer. Everyone wanted to work with him because his scripts won Oscars, made studios money, and the movies that were made from them were actually good and memorable.

So it’s ironic that the best script and the best film he has made were his least successful. “Synecdoche, New York” barely made back $3.5 million of its $20 million budget, and it happened to be released during the worst economic crisis since the Great Depression. Afterward, it took Kaufman seven years to release a new movie, filmed with Kickstarter money and no studios involved.

As Roger Ebert points out in his review of “Synecdoche”: “It is obvious that he has only one subject, the mind, and only one plot, how the mind negotiates with reality, fantasy, hallucination, desire and dreams.” His previous successes all explored the idea of human perception and how we are used to model our own reality apart from everyone else’s.

In “Synecdoche, New York”, Kaufman finally consolidated all of his previous takes on his mind with a film in which a man literally replicates his own reality in order to maybe understand it – or to at least feel like he’s in control.

His former main characters wrestled with their flawed personal concepts and insecurities and Caden succumbs to them and tries to cope through his art. For this reason, I think “Synecdoche, New York” is the most personal of Kaufman’s films.

The complexity of the story grows to absurd levels at the end of the movie. For this to be compelling there had to be an amazing script behind it all. Each character has its own voice; it really feels like Kaufman built a whole universe of people. However, the overall theme (until the end) is that we’re looking at all these people through Caden’s biased eyes. He was able to emulate how humans feel toward others and then turn it around when Caden achieves the final revelation.

It’s easy for me to say that the most essential element of the whole film was the amazing script upon which everything else is based.