Many longtime movie genres such as musicals, westerns, melodramas and the like have, in recent times, either largely vanished from big screens or become marginalized. However, one genre that not only keeps going but seems to have grown in popularity and prestige is the mystery/suspense thriller.

Something about the forces of good, or at least the conventionally normal, going up against those of evil or corruption and stories about descent into the realm of darkness (sometimes returning to light, sometimes not), strike a deep chord in the mass psyche of the movie-watching public.

It must be admitted off the bat that not all films of this type are created equal. Once it was widely thought that Alfred Hitchcock was just an unusually capable technician working in a minor genre and that his films weren’t much more important than the work of, say, B-maestro (and later schlockmeister) William Castle.

However, later, a more profound film scholar revealed that Hitchcock invested his films with far deeper and more fundamentally meaningful and often disturbing motives, themes, and characters than those who set out to simply create a reasonably efficient mystery film with a few spine-tingling moments. The basic principle behind what makes Hitchcock’s films work so well is still true today.

Every year, a new crop of thrillers will come out. Some will have a lot of violence and gore while others will be more subdued. Some will be rather plainly made while others will revel in technique, sometimes for technique’s sake more than anything else. However, every once in a great while, one will come along which not only employs all the tools of good film grammar in a standout manner, but also speak to something darker and deeper, something which harkens to an element causing deep social anxiety at the time of the picture’s release.

In 1987, with the specter of AIDS newly looming  ominously over the sexual landscape, “Fatal Attraction”, a somewhat adroitly-made thriller concerning the consequences of sexual misconduct (though not specifically AIDS) took the country by storm. Just after the 2017 Oscar season, a time of low cinematic expectations, an unheralded film entitled “Get Out”, which starts as a satire of race relations (using the basic premise of 1967’s overrated “Guess Who’s Coming to Dinner”) and then escalates into a nightmare version of interracial warfare, hit a deep nerve in a very polarized country.

However, during the 1995 Christmas season and the early days of 1996, another such film came of seemingly nowhere to stun audiences who turned out to what was being touted, largely by word of mouth, as one of the most truly disturbing thrillers ever made.

Often such buzz is met with comments such as “oh, it wasn’t so much or that scary” afterward and such films look laughable years later. This is not the case with “Se7en”, a work which stills haunts viewers some 20 (yes!) years later. Why? The following list will attempt to summon seven reasons this film is still powerful and still watched and remembered.

1. “Se7en” has a profoundly disturbing theme set within a convincingly downbeat view of the world 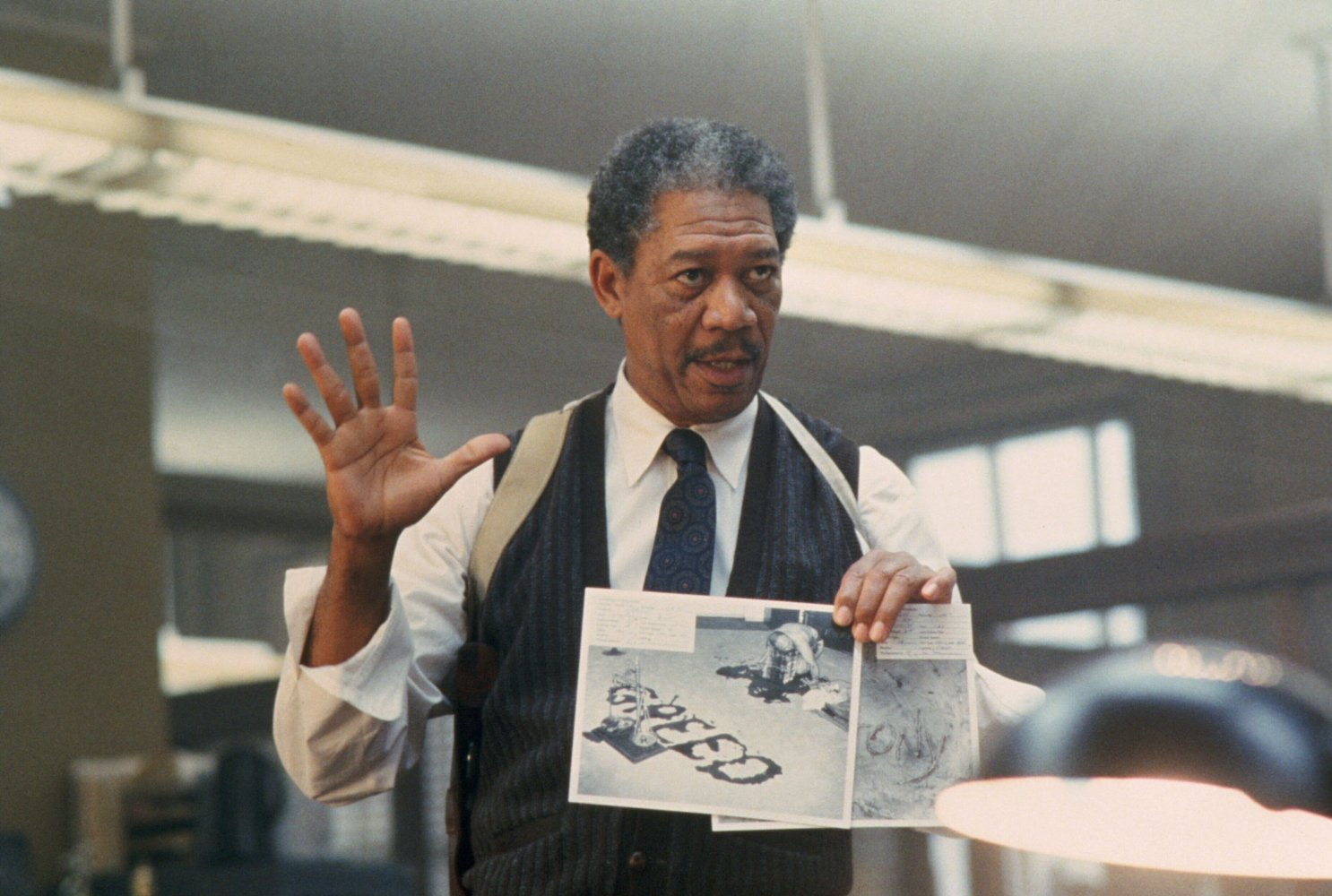 One interesting fact about it is that it is the first professionally produced script of a former cashier at the beloved but defunct Tower Records. This is significant, for no one with any film career to speak of after writing such a bold and downbeat script would either expect anything good to happen such as the script getting filmed, or to ever work again.

The odd thing is that the basic idea of the film’s plot is not that original. There have been many films that detail a maniacal serial killer employing some pattern in his murders as he goes about trying to tell the world… something by all of his killings. In this case, the killer is employing the seven deadly sins mentioned in the Bible (lust, greed, vanity, gluttony, sloth, anger, and wrath).

Usually such a situation is set up with the upright, dogged police detectives hot on the trail as the killer, often known to the viewer, sends ‘clever’ taunting messages to them between murders. In this film, the emphasis is largely on the side of the law, which seems to be greatly baffled at crimes that the rather sophisticated killer assume will speak for themselves (and considering the tableaux he creates, discussed later, he may well have a point).

The thing that begins to get under a viewer’s skin with this is that, while the killer is undoubtedly a crazed sociopath with no right to perpetrate his grisly crimes, it’s also hard not to see his larger point as well. Each of his ‘illustrations’ of a particular sin also displays that the sin is not just localized to the victim but is indicative of the larger society.

As the police investigate the crimes, it becomes impossible to ignore the fact that the crimes seem to be part of a society which is quickly going out of control, where anything like morals or values have lost their currency. Though “Se7en” is far from a moralistic, let alone didactic, film, events take place which make it look as though society at large is fully deserving of the killer’s judgement and punishments.

2. “Se7en” is a fine example of a major talent awakening 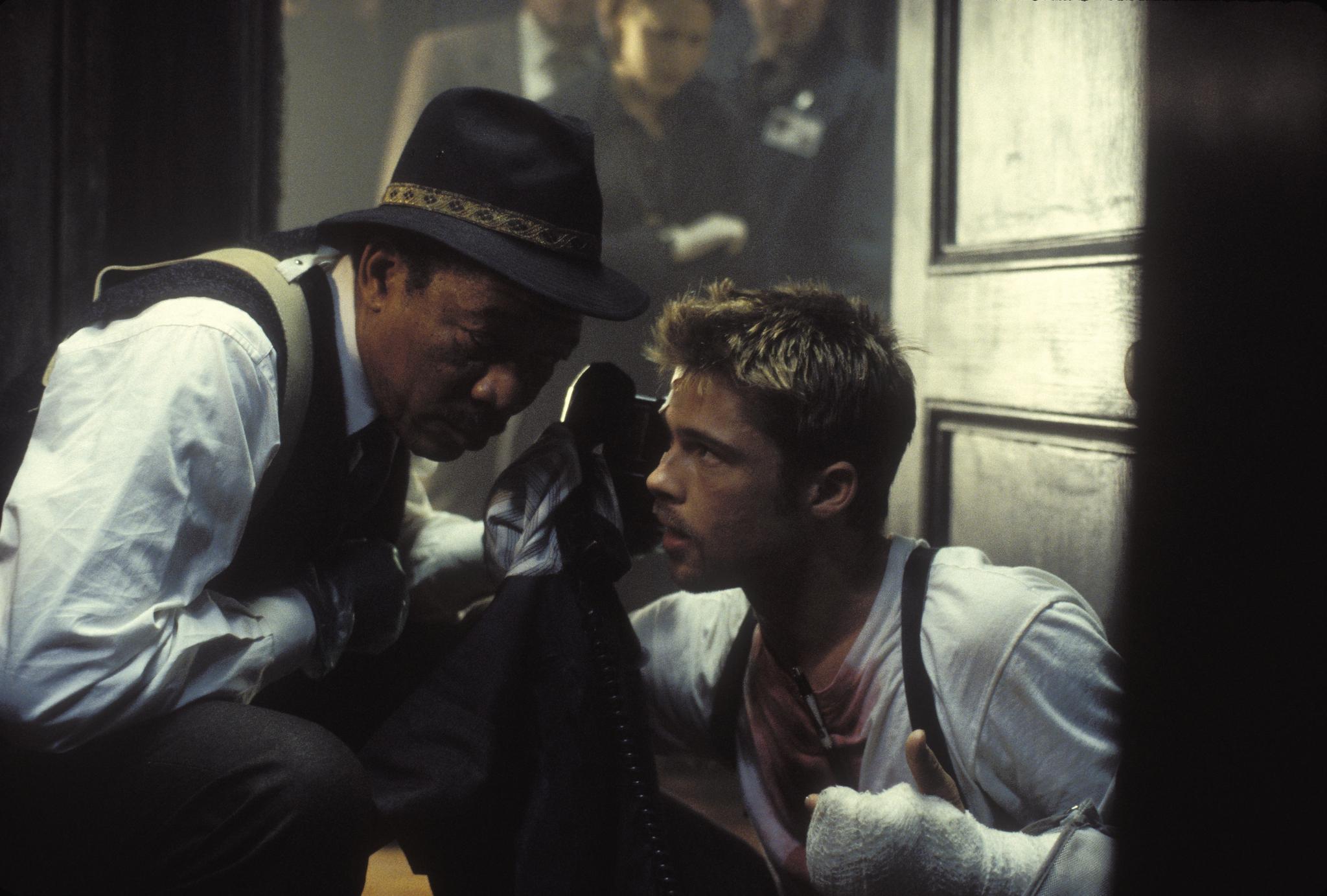 There are a number of filmmakers in modern cinema scene whose names attached to a project instantly raises a savvy viewer’s hopes that said project will turn out to be interesting, good, or both. Among these director/writers is David Fincher, a tough-minded filmmaker who can create a crime film (such as the superlative “Zodiac”) like few others and who also is a sharp social commentator (“The Social Network”, truly a masterwork).

However, this was not the case before the debut of “Se7en”.  Three years prior, he had broken into the ‘big time’ with “Aliens 3”, the film which effectively killed off the lucrative ‘Alien’ franchise and scored a big flop with audiences and critics. Looking back, it’s obvious Fincher was as take-no-prisoners as he would ever be, but the film had a problematic expression of theme.

Managing to fight his way back with a much better script (which he discovered), he was determined to get it right or die trying, so to speak. When execs at (now defunct) New Line Cinema wanted to tone down the film, especially its grim finale, he stood firm. He said this film might be the one chance any of them had to be remembered and he wouldn’t allow it to be compromised. He was right, for the very elements to which the men in the suits objected were the very ones the viewers seized on and remembered.

It must also be noted that Fincher is a master of technique, overseeing skillful lighting, camerawork, and editing, the hallmarks of almost any good thriller. However, there is one thing which is uniquely his: he can make stillness more unnerving than any other living filmmaker.

In his film, the shadowy figure of a man silhouetted against windows at the far end of a hall, and in “Zodiac”, a still parked car on darkened lane inspire a sense of panic in viewers since his adroit framing and cutting make it plain in both cases that something terrible of about to take place (and does in both cases). Without his courage, neither Fincher’s career nor “Se7en” would have ended up on the cultural radar and all his good work since might never have been. 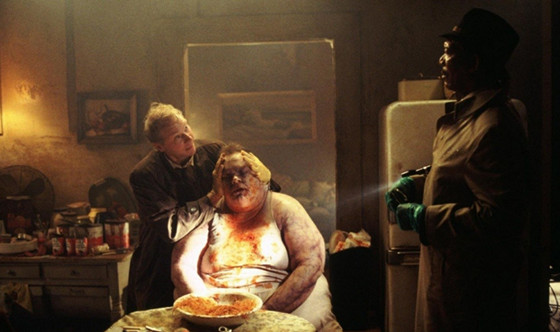 If “Se7en” were the nihilistic experience it might have been in other hands, and which many similar films are, it would be easy to brush off as the work of lazy cynics taking the cheap and fashionably obvious way out.

However, this film tempers the evil and despair with the forces of good. It’s important to note, though, that this does not mean good can ever be assured of triumph nor be able to wrap things up in a bright and tidy ribbon. Here it is depicted as a constant if weary force that must remain vigilant if anything is ever to be spared from the forces of evil.

This is embodied in the character of the veteran detective who is, appropriately, seven days away from what looks to be a well-deserved retirement.  He wants to leave all the foulness and unpleasantness to other, younger, fresher, men but circumstances will show him that he is too badly needed to leave, that even his great moral strength and skill may not always bring about justice. That being the case, what chance would the callow and less experienced have, despite the best of intentions?

The one thing above all others that makes this part of the film work is the casting of Morgan Freeman. If this actor didn’t exist he would have to be invented. Rising from New York theater and children’s TV (and, despite his displeasure, a generation will always remember him as the ultra cool “Easy Reader” from the wonderful PBS show “The Electric Company”), he is to this movie-going generation what Henry Fonda was to earlier generations – the personification of integrity and moral rightness.

It speaks volumes that he can play authority figures on a regular basis (how many times has he been president onscreen?) without there ever being a question of why he is the one in charge of things. He is also just about the most grounded of actors, stating repeatedly that he doesn’t do research, doesn’t burrow into “the moment”, and only learns his lines and goes out and tries to make it sound convincing.

Surely there is more to it than that, but a true artist never tells or explains. Though he is an Oscar winner with, to date, four additional nominations (and several other deserving performances), his work in “Se7en”, not a film at all prized by the Academy (only an editing nom) is still among his best remembered performances.

At the end of the film, only the fact that his character has decided to stick around and try to keep on plugging away in the name of rightness brings any comfort to the viewer after the shattering conclusion.