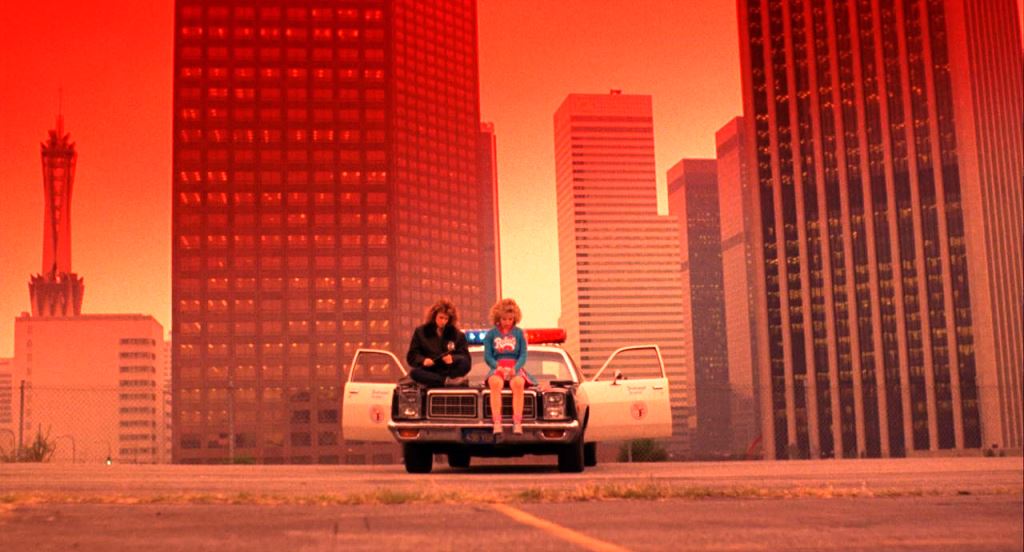 Surely the thriving home video market is partially responsible for the influx of cult films that saturated popular culture throughout the 1980s. As a sort of addendum to Taste of Cinema’s recent list detailing the finest cult fare of the 80s, the following list details more obscure films, of the sort you have to dig around a bit to uncover.

What you’ll find herein are movies that will appeal to the adventurous filmgoer, those with a unique sensibility, contrary to the mainstream market, more at home amongst the counterculture; genre films for niche audiences that joyfully zero in on taboo content and proscribed subject matter that deliriously upends convention with razor-sharp satire, exploitation, and/or legitimate ideological dangers or controversial content.

So if you crave something strange, something to foster unhealthy obsession, stylish strangeness, and something, let’s face it, just a little bit fucked up, then these films are for you. Enjoy!

While on the surface there’s little to recommend about this shocker aside from gratuitous cruelty and, as the title suggests, necrophilia, but what else would one expect from West Berlin exploitation legend Jörg Buttgereit (Horror Heaven)?

Nekromantik focuses on one Rob Schmadtke (Daktari Lorenz), an employee for Joe’s Cleaning Agency, where he cleans up corpses from road accidents and that sort of unsavory thing. See, it’s all catnip for Rob, who loves defiling corpses.

Does that sound transgressive enough? Wait, there’s more (including a ménage à trois with a corpse and a steel pipe), but, amidst all the nastiness and taboo smashing, Buttgereit actually injects a lot of satire on bourgeois mores –– Rob stops defiling corpses long enough for a short-lived warm-blooded romance with Betty (Beatrice Manowski) –– and the film even features a whip-smart slasher parody via an extended film-within-a-film sequence.

This one’s for horror diehards and I wouldn’t really recommend it to anyone else beyond that, but the extreme masochism, dysfunction, and themes of social isolation and despair combine with a strange eroticism that will appeal to that select and skewered few. Proceed with caution. 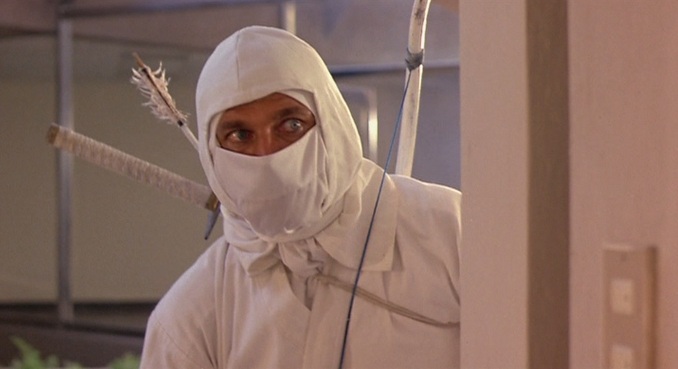 Director Menahem Golan and writer Dick Desmond helped drop kick the 1980s “Ninja Movie” craze with this cheesy actioner. The first in Cannon Films’ Ninja Trilogy (1983’s Revenge of the Ninja and 1984’s unintentionally hilarious Ninja III: The Domination would soon follow), the “plot” follows former US Army op Cole (Franco Nero), skilled in ninjutsu as well as having a knack for loudly stating the obvious, leaves his ninja training in Japan for the Philippines to visit Frank (Alex Courtney) an old army chum, and his sex-kitten wife, Mary-Ann (Susan George).

Wouldn’t you know it but Cole’s pals are in trouble from the villainous Charles Venarius (Christopher George), a CEO oil magnate who has no problem hiring a kick-ass ninja named Hasegawa (Shô Kosugi), who just so happens to be an old rival of Cole’s from a ninja academy, or whatever.

For all the bad acting, steamy sex, and gratuitous gore, Enter the Ninja does showcase some pretty spectacular stunts and more than a few finely choreographed martial arts fight sequences.

When the Putterman family’s sparkly new satellite TV system starts receiving signals from a distant planet called Pluton, it’s not long before their sweet pay-per-view setup is doubling as a passageway to a hostile alien world courtesy of directory Ted Nicolaou (1991’s Subspecies), and the father and son writing team of Albert and Charles Band.

This freakishly fun film works surprisingly well as a sci-fi horror with healthy doses of comedy, and as another one of those rather violent fright films marketed towards children and families that seemed to flourish in the 1980s (we can probably blame the Gremlins films for this). One of TerrorVision’s many highlights is a funny OTT performance from Gerrit Graham –– a cult figure firmly established back in 1974 when he played glam rocker Beef in Brian De Palma’s midnight masterpiece, Phantom of the Paradise. 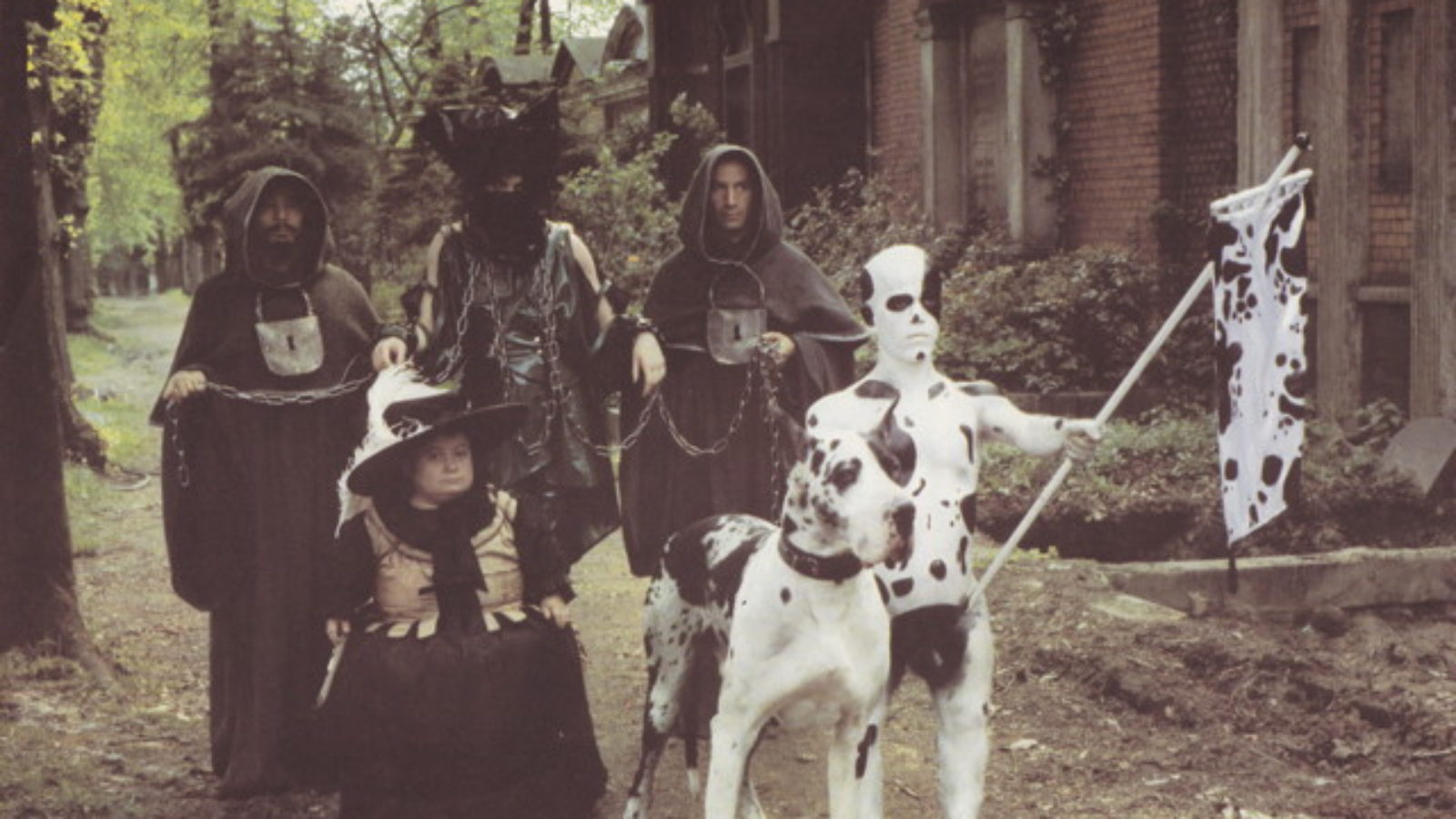 At once referencing and ridiculing a wide range of cult classics from Tod Browning’s Freaks (1932), Kenneth Anger’s Scorpio Rising (1963), and Alejandro Jodorowsky’s El Topo (1973) with an impressively wide assemblage of horror icons –– unmistakable visual references to Elsa Lancaster’s visage as Frankenstein’s bride, as well as a bevy of witches and shambolic zombies –– dominate almost every frame of this West German comic opus from Ulrike Ottinger.

A mixture of divine treasure and tawdry trash, the freakery and surrealism on parade, perfectly captured in Magalena Montezuma’s strange central performance, portrays physical deformity and mental anguish with rich religious allegory, fantastic elements, and kitschy pop mythology. Is it hard to follow? Maybe, but the lacerating critique of consumerism and the endless homages make Freak Orlando a singular and sensational filmic experience. Let the buyer beware! 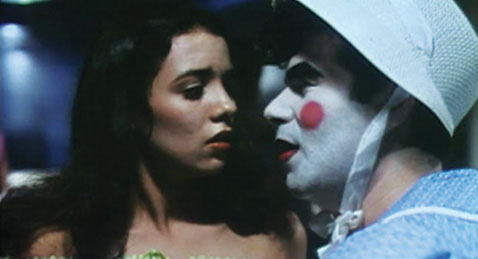 Set in a future where nuclear holocaust has wiped out not just most of the human population of earth, but also the libido for most of the human race as well, Café Flesh posits a world where there are two distinct classes: Sex Negatives and Sex Positives. The plot follows two women; Angel (Marie Sharp) and Lana (Pia Snow, aka B-movie actress Michelle Bauer), who are patrons of the titular Café Flesh, a sexy nightclub run by Max Melodramatic (Andy Nichols). Sexiness ensues.

Two sequels would follow, and a thriving home video market helped to keep the Café in the hearts and pants of cultists well beyond the film’s expiration date.

You weren’t much of a cult movie fan in the 80s if you didn’t have a weakness for the raunchy and riotous B-movie production group Troma Entertainment, and the trash movie moguls at its helm. Michael Herz and Lloyd Kauffman (often operating under the pseudonym “Samuel Weil”).

New Jersey’s Tromaville High School –– conveniently located just next door to an accident prone nuclear power plant –– is about to see their honor students mutated into rampaging freaks due to a toxic waste contamination in the water supply. 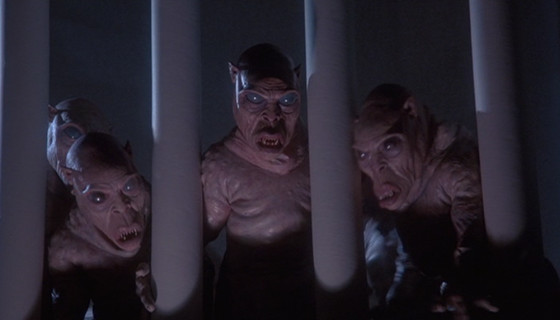 This surprisingly effective slice of horror-lite, targeted at a young audience who could easily identify with the film’s twelve-year-old protagonist, Glenn (Stephen Dorff, in his feature film debut), is a creepy, funny, and refreshingly unjaded dark adventure.

An American-Canadian co-production from director Tibor Takács and writer Michael Nankin, both of whom certainly must share an appreciation of Ray Harryhausen-style stop-motion, The Gate introduces us to Glenn, left in the care of his 16-year-old sister Alexandra (Christa Denton), as their folks leave town for the weekend.

And while his big sis would much rather throw a party than pay her annoying little brother much attention, Glenn and his bff Terry (Louis Tripp), both heavy-metal enthusiasts, soon summon some dark shit from a hole left by a fallen tree in the backyard.

A gateway to hell or just overly elaborate liner notes from their favorite aggressive LP, “The Dark Book”, played backwards, of course, just maybe? The Gate is first-rate kiddie horror, and a perfect intro for moppets who are curious about monsters (it was certainly a “gateway” for me, to many more adult-framed fright flicks). Miss this movie at your own peril. 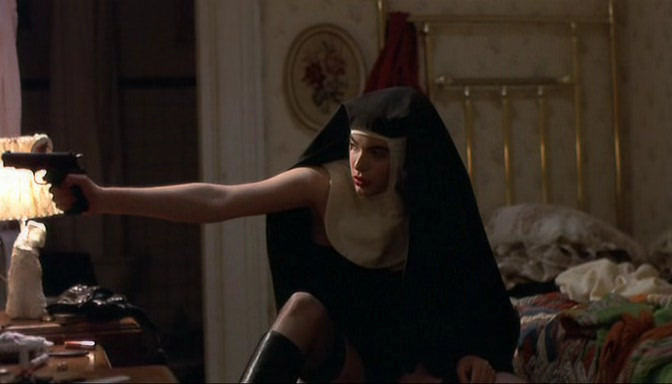 This shocking exploitation thriller from Abel Ferrara, also known as Ms. 45, stars an unshakably brilliant and altogether mesmerising Zoë Tamerlis Lund as Thana, a twice-raped garment worker in nasty New York City, now out on a violent rampage of revenge.

Highly stylized and hard to shake, Angel of Vengeance draws attention to the visual aspects of it’s jarring narrative as Thana, a mute, leads the viewer through lengthy sequences that are devoid of dialogue. Ferrara heightens what’s onscreen via a variety of experimental audio effects to emphasize the isolation Thana endures, as well as the male-dominated communication sphere that she must eschew as she becomes the avenger of wronged women.

A wide range of distorted speech effects, a reverb-drenched soundtrack, and sinister slow-mo imagery adds to the artful transgressions. Most unforgettable of all, and most assuredly the stuff of iconic cult film majesty, is the visage of Thana in nun’s habit as she does some serious damage to the imbecilic men who get in her way.

Despite some far-fetched elements, Angel of Vengeance offers up cold-blooded catharsis with a blood-flecked halo.