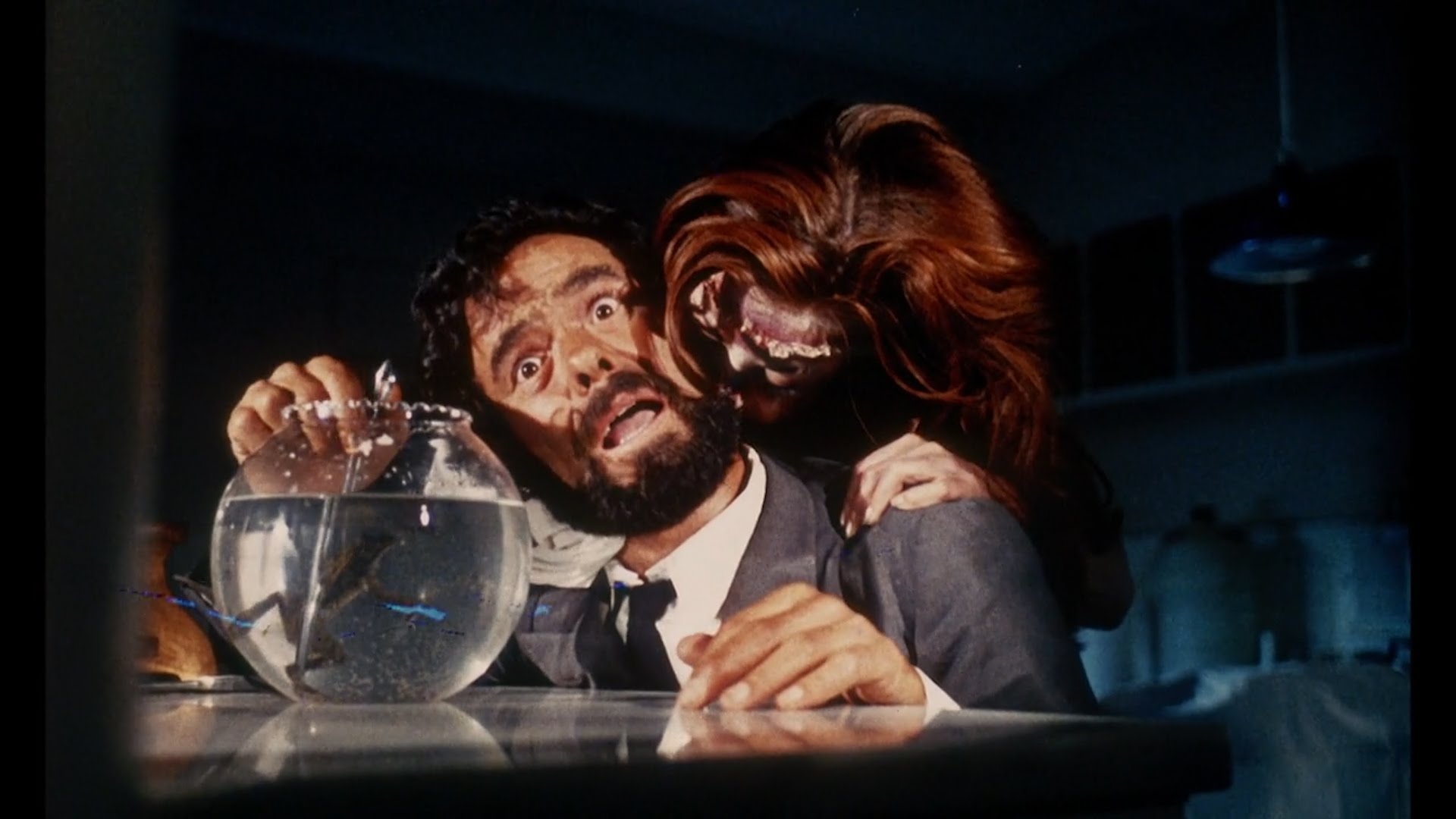 If the Sharknado franchise tells you anything about horror movies, it’s that gore, sleaze and gratuitous nudity have given way to bad CGI, lame gags and celebrity cameos. Instead of watching a man in a rubber suit carry off a bikinied Playmate Of The Month, today’s audiences are captivated by the sudden appearance of David Hasselhoff.

If you’re going to exploit the crowd for a quick buck, you should at least have the decency to do it the old fashioned way, by getting seriously bloody and seriously sexy. Erotically charged horror pictures not only provide a visceral thrill, they’re also likely to linger longer in the memory than a picture about flying sharks.

Consider filmmakers such as Jean Rollin, who in La Morte Vivante (1982) gives us a weird, atmospheric film about a young woman who returns from the grave with an insatiable lust for blood. The movie struck a chord with Rob Zombie, who had a hit with a song that borrowed the film’s English language title, The Living Dead Girl.

Rollin’s beautifully photographed features acquired for him a reputation as an artist, but even at the tawdrier end of the scale, starlets like Linnea Quigley and Brinke Stevens enliven whatever trash they appear in. If you’re looking for an old school thrill, you need to watch the following. 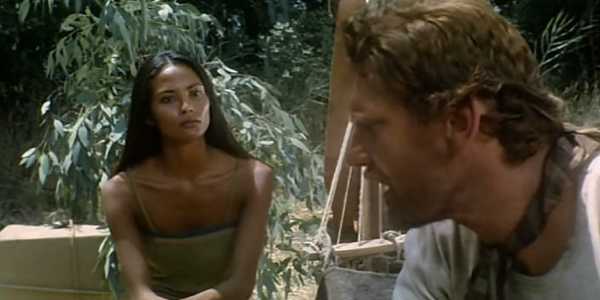 Billed as Moira Chen in her more mainstream roles, Laura Gemser is best known for disrobing in softcore trash like Sexy Nights Of The Living Dead (1980) and Violence In A Woman’s Prison (1983). You could place several of her movies on a list like this, but Emanuelle And The Last Cannibals is interesting for the way it attempts to combine the softcore and cannibal genres.

For the first half, the “plot” involves Gemser getting naked every 10 minutes, including a bizarre sequence where a chimp smokes a cigarette while watching her bathe. Then the cannibals show up and abduct our heroine, who promptly escapes and….that’s it. The End. 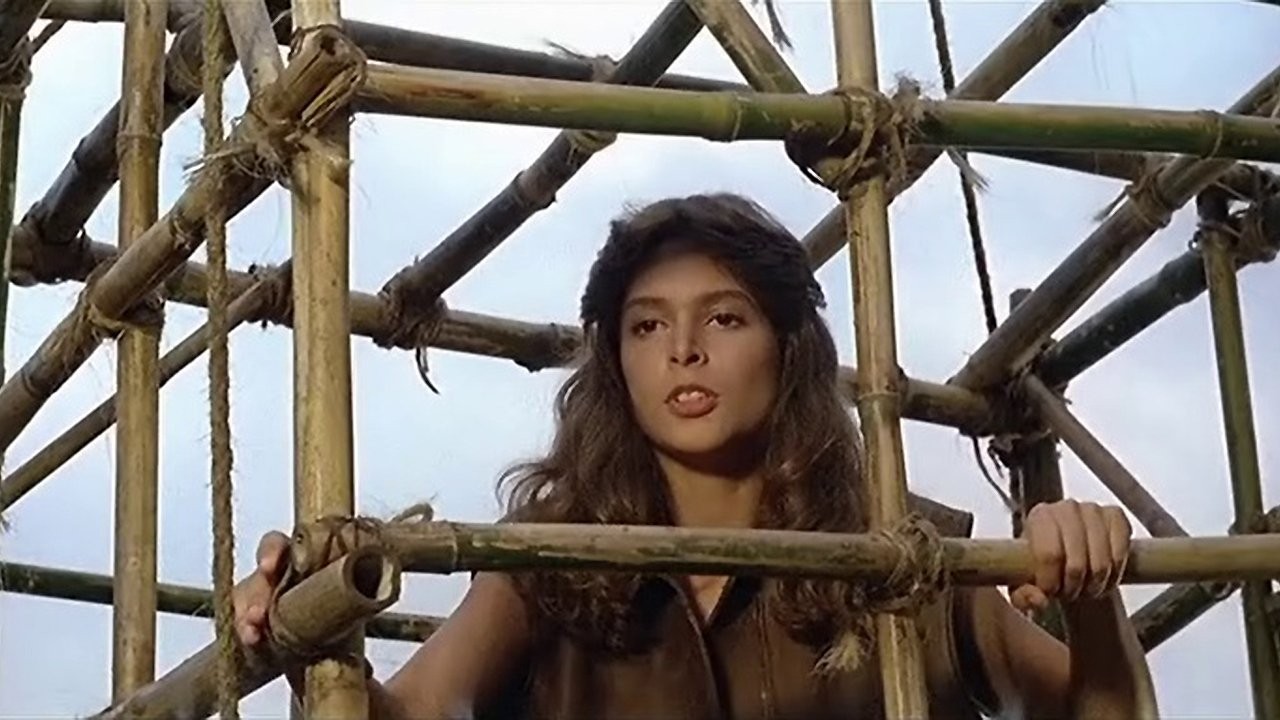 It’s your typical story of an Indiana Jones-ish adventurer and two lingerie models who following a plane crash are set upon by a succession of leering voyeurs. First, and most bizarre, are the tribesmen who force the girls into their birthday suits so they can dance for a claw-handed deity who emerges from a cloud of smoke.

Escaping with suspicious ease, they next encounter a perverted slave owner. While he attends to his illegal mining operation, the girls are “entertained” by his lesbian henchwoman, who whisks them off for a first date they’ll never forget.

The film also lends itself to a drinking game: take a drink every time the director comes up with another way of denuding his cast. 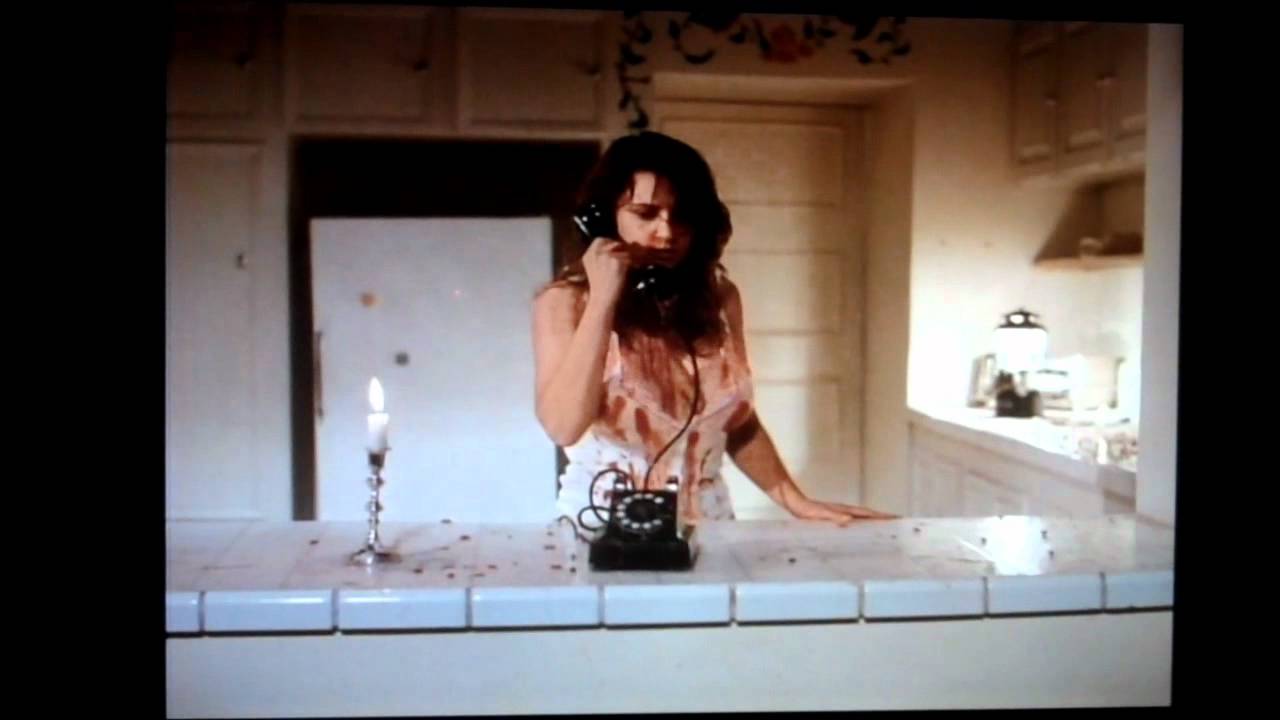 Harlan Ellison once dedicated a book to Jim Wynorski, the “great cinematic auteur” who gave the world such cultural treasures as The Hills Have Thighs and House On Hooter Hill. He’s up to his usual tricks in Sorority House Massacre II, a movie that probably shouldn’t be viewed by feminists.

Massacre I was your typical 80s slasher movie with screaming damsels in distress, a synthesizer score and lots of power tools, so Massacre II is more of the same, only played for laughs. After moving into the sorority house from the first film, five girls use a Ouija board to contact the dead killer (why not?), who knocks them off one by one while they attempt to slip into something more comfortable.

“There may have been better horror movies made,” claims Joe Bob Briggs, “but not with this many women in their underwear.” Put it this way: if Melissa Moore (36C-26-36) and former Page 3 girl Robyn Harris (34C-24-34) were cast for their measurements, Wynorski got his money’s worth and then some. 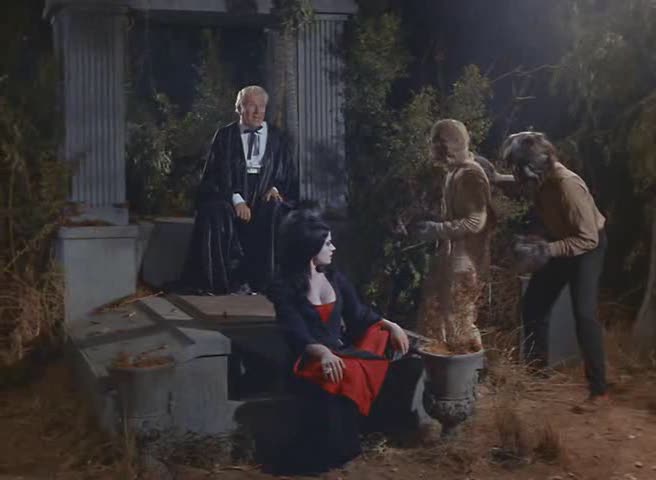 When the Emperor kidnaps an aspiring writer and his girlfriend, he forces them to watch ten striptease acts performed by such starlets as “Gold Girl” (who dances covered in gold paint), “Cat Girl” (who wears a crotchless catsuit) and “Slave Girl” (who dances naked with her hands bound).

Speaking of starlets, special mention must be made of Pat Barringer, whose dual role as the heroine and as Gold Girl allows her to give two amusingly bad performances. “Poor Pat Barringer,” muses John Andrews, who played The Wolf Man. “She thought she was going to be a big star. And she couldn’t even scream and make it convincing. She couldn’t do s**t. And those tits are plastic, by the way.” 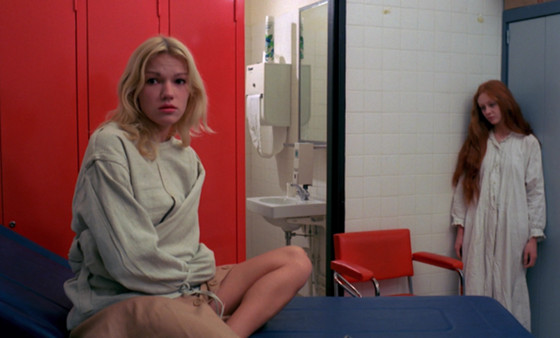 Night Of The Hunted is one of his more surreal films, where a woman wakes up in a mysterious clinic whose patients all seem to be suffering from amnesia. In the hands of a Hollywood director, this would lead to a mind-bending thriller full of chases and plot twists, but when Rollin’s cast is made up of hardcore performers, you know he has something different in mind.

There are multiple softcore sex scenes, a hint of lesbianism and some heavy doses of violence (a woman plunges a pair of scissors into her eyes), but then Rollin explains why everyone’s mind is deteriorating – an environmental accident is slowly transforming them into zombies. Obviously. No other explanation is possible. 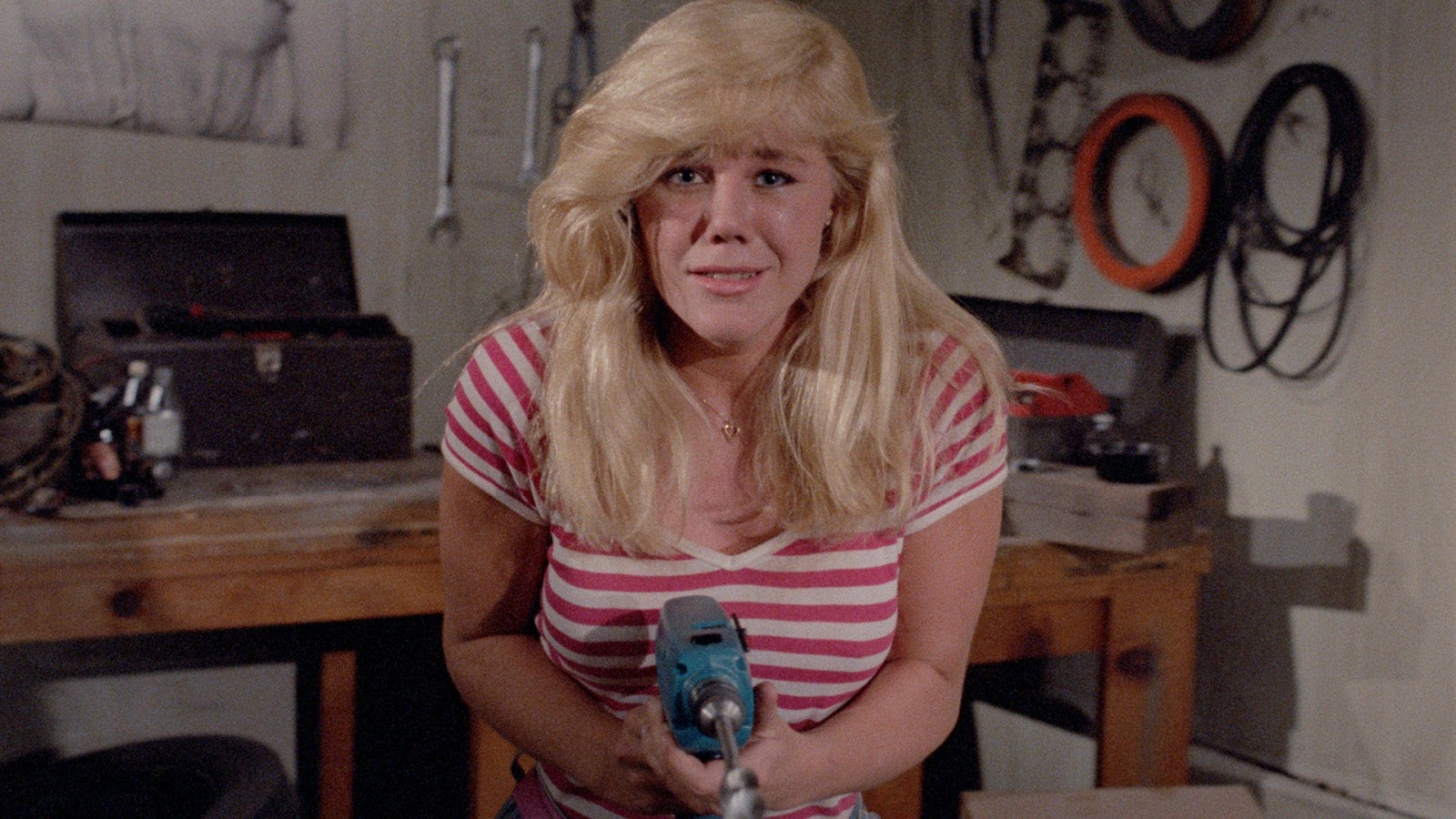 Picking up where his idol, Al Adamson, left off, Rustam hires some cheap, washed-up actors, a few faded TV starlets and, of course, John Carradine, whose spaceship/revolving light-rack lands near where some promiscuous potheads have gone skinny-dipping.

Mars needs women (and men), preferably idiots in a state of undress, so Carradine and his groovy space stewardesses (including Julie Newmar and Tina Louise) turn the area into Camp Blood Bank and literally suck the life out of its inhabitants. Somehow able to take over a local hospital, they enlist grease monkeys Aldo Ray and Neville Brand to supply them with 16-24 year olds (“no younger”) for their ‘experiments’, which seem to revolve around the movement of breasts beneath tight, clingy t-shirts.

If you’ve ever wanted to see Newmar and Louise as aliens in low-cut dresses, help yourself. 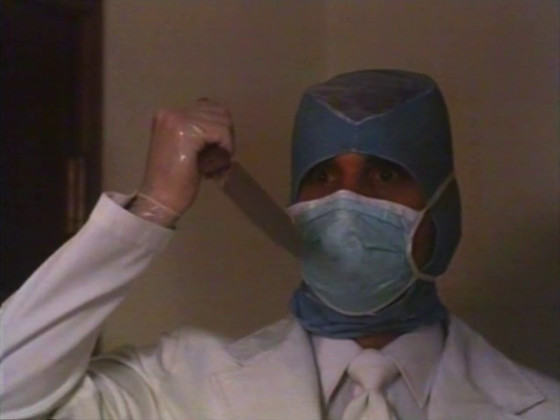 Former Playmate Barbi Benton plays the lead in this early 80s slasher movie, which provides a new benchmark for over-the-top direction, unbelievable storylines and performances so broad they qualify as camp. Fortunately, not only is Ms Benton a great screamer, but she can take a nude examination with the best of them.

You see, Barbi’s at the hospital for a check-up, but her records have been altered by one of those heh-heh-heh psychos you only ever see in movies like this. Said alteration is enough to make the doctors and nurses detain her, remove her clothes and restrain her, which is pretty much how she spends the rest of the movie.

Riding in on the coattails of Halloween II, only without its ‘subtlety’ and ‘sophistication’, Hospital Massacre proves Cannon Films’ dedication to pursuing the lowest common denominator. The director is Boaz Davidson of Lemon Popsicle fame (he later produced The Expendables films), so if you’re looking for a sleazy romp along those lines, help yourself.