Among the most acclaimed films from 2015, “The Lobster” is a dystopian drama and another hit in director Yorgos Lanthimos’ career after his film “Dogtooth”, released in 2009.

In “The Lobster”, people are prohibited from being single in the near future. If anyone is not engaged in a romantic relationship they are taken to The Hotel, a place where they need to find a partner in 45 days, otherwise they will be transformed into an animal and be sent to The Woods.

Starring Colin Farrell and Rachel Weisz, the movie won the Jury Prize at the Cannes Film Festival and has a very intriguing approach on the way relationships are viewed in modern society. Also, its premise alone makes it one of the best dystopian films made in this decade.

This list is going to focus on dystopian and sci-fi films, but also on different kinds of romantic movies that might have unusual approaches in themes like love, science and life. If you think any other film could be a part of this list, please leave it as a recommendation in the comments section below. Also, it’s never too late to remember that this list doesn’t rank the films, but only recommends movies that relate to “The Lobster” in one or more of its themes.

So, here are 10 movies you should watch if you liked “The Lobster”.

This dystopian romantic film written and directed by Spike Jonze, starring Joaquin Phoenix, Amy Adams and Scarlett Johansson, is one of the greatest films from 2013. The film that won Spike Jonze an Oscar for Best Original Screenplay focuses on a very solitary writer (Phoenix) who starts a relationship with an operating system (Johansson).

Having just ended a very important relationship, this man is in need of affection and he finds in this operating system – built to take care of every necessity this man has – the remedy to his solitude.

Being a great about our relationship with technology and treating subjects how some aspects of affairs happen in our modern society, “Her” is a very inventive dystopian and romantic movie that approaches solitude in a very unique way. If you liked “The Lobster”, you should definitely check out this movie. 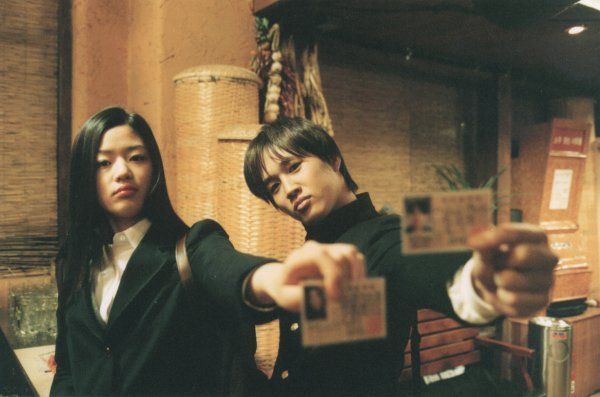 Directed by Jae-yong Kwak (“The Classic”), and starring Ji-hyun Jun and Tae-hyun Cha, “My Sassy Girl” is a South Korean romantic comedy released in 2001. The movie became the highest grossing Korean comedy of all time due to its success.

Divided in three parts (part one, part two and an overture), the movie follows a couple that meet at a station. The unnamed woman (Jun) is drunk and Kyun-woo (Cha) is afraid to assist the girl because everybody is going to think she is his girlfriend. From that moment on, they develop a relationship full of encounters and mismatches.

Being an uncommon romantic film with two intriguing main characters, and full of some very funny situations as well, “My Sassy Girl” is a good South Korean comedy from the beginning of this century that should definitely be watched by any cinephile.

There are a wide variety of love stories in the history of film, but in this specific one, a man, played by Ryan Gosling, falls in love with a sex doll.

In this melancholic comedy, Lars Lindstrom (Gosling), a delusional and very shy man from a small town, orders a sex doll on the internet and develops a deep emotional relationship with her. He brings her to dinners, parties, and aside from his brother being very worried about him, the entire town seems to support this delusional man’s behavior.

One of the best performances in Gosling’s career as this man who seems to be secluded from his environment, “Lars and the Real Girl” is really an exquisite and fascinating film about a great character and, of course, about love.

Although it has a cult following, this is really an underrated film. Directed by John Carpenter and based on the 1960’s short story “Eight O’Clock in the Morning”, written by Ray Nelson, “They Live” is a sagacious sci-fi from the late 80s that is definitely worth watching.

In the film, during the 80s, a working man discovers a pair of sunglasses that makes him able to see the cruel reality of the world. With these glasses, he is able to find hidden messages such as “Submit to Authority” and “Stay Asleep” around town, the way the media and the government found to control the population, and is also able to see the real faces people have. From that moment on, he decides to join the resistance movement in pursuit of a better world.

Almost 30 years later, this very politically relevant film really does not get the praise it deserves for its great setting and good rhythm imposed by Carpenter in its narrative. “They Live” is a great social allegory that makes it a mandatory film not only for fans of sci-fi, but also fans of political films.

The magnum opus of acclaimed German director Fritz Lang follows the story of a city in the future that has its population divided. The city planners live above while the working class has to live in an underground world. One day, the son of the city’s mastermind meets a working class woman, a prophet who affirms a savior is on the way to work out their differences.

This film that figures groundbreaking special effects for the time it was produced is a social about power, corruption and humanity, having some of the most iconic scenes in the history of film.

With an amazing performance by Brigitte Helm, “Metropolis” is one of those mandatory films for anyone who loves cinema and its dystopic approach of a torn-apart society being a way to surround social and political themes is a great metaphor that makes it definitely a movie worth watching.

1722
SHARES
FacebookTwitterSubscribe
Subscribe via Email or RSS Feed
Pages: 1 2
Comments (5)
Movies You Should Watch If You Liked “The Lobster”