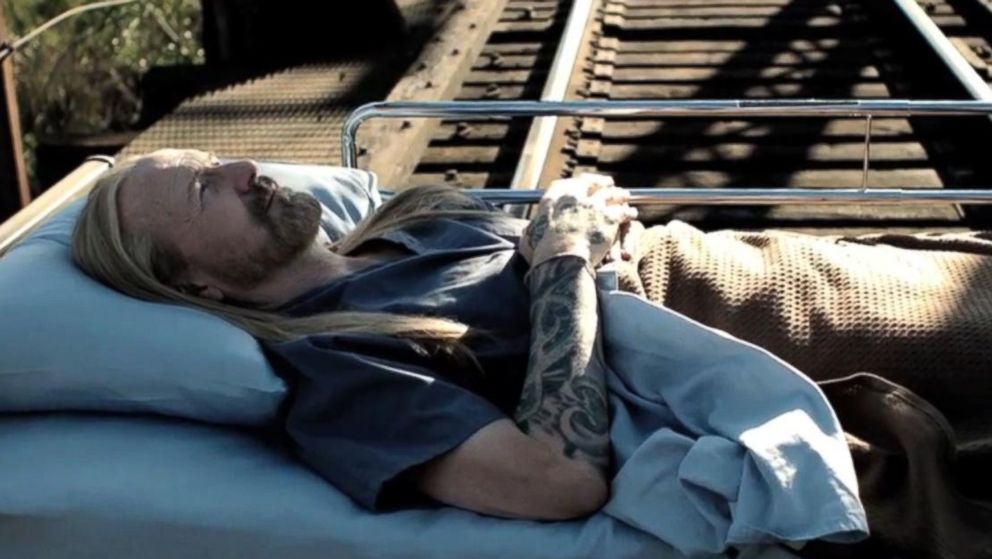 Film productions are rarely, if ever, free of mishaps, but sometimes these incidents are so numerous and/or unusual that they warrant further study. Here are ten examples of notably bizarre accidents that occurred on major film sets.

Towards the end of his life, when asked about The Conqueror, John Wayne would visibly wince and decline to comment, on one occasion stating, “it’s best not to make an ass of yourself filling roles you’re not suited for”.

While selecting Iowa-born Wayne to portray Ghenghis Khan was an undeniably foolish decision, the 1956 production of The Conqueror faced much graver problems than the Duke playing a Mongolian. The historical epic, now often referred to as one of the worst films ever made, was shot in Snow Canyon, Utah.

A few years earlier, Snow Canyon had been blanketed with radioactive fallout after atom bomb testing in nearby Yucca Flats, Nevada; consequently, many present on the set of Conqueror were exposed to dangerously high levels of radiation. In addition, over 60 tons of contaminated soil from Snow Canyon was packed up and shipped to Los Angeles for reshoots, further exposing the participants to the polluted earth.

When People Magazine covered this story in 1980, they revealed that ninety-one members of the cast and crew had developed cancer; forty-six of those had passed away, including Lee Van Cleef, Pedro Armendariz, Agnes Moorehead, John Wayne, and the director, Dick Powell.

The film was financed by filmmaker and eccentric recluse Howard Hughes, his final screen credit. For decades he kept the film under lock and key, refusing to screen it for any audience, ashamed of its unfortunate legacy. 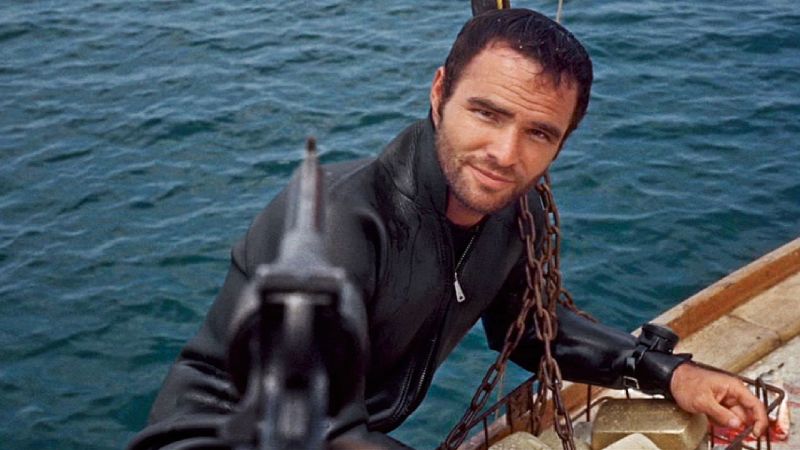 Three years after releasing his neo-noir classic The Naked Kiss, Sam Fuller signed on to direct the film adaptation of a novel called His Bones Are Coral, an adventure story dealing with treasure hunters diving into shark-infested waters. Fuller rewrote the script, changed the title to Caine, and production began in 1967, off the coast of Mexico. Burt Reynolds was cast in the lead role. Not long into filming, a stuntman named Jose Marco was killed on camera when a white shark, improperly sedated, ripped through safety netting and attacked him.

After filming wrapped, the production company re-named the film Shark! in an effort to capitalize on this tragic accident. Fuller, justifiably disgusted and, furthermore, upset with the final cut of the movie, insisted his name be removed. The producers would not agree, and the film was released, bearing Fuller’s name, in 1969. The rights to Shark! are now owned by Lloyd Kaufman of Troma Entertainment. 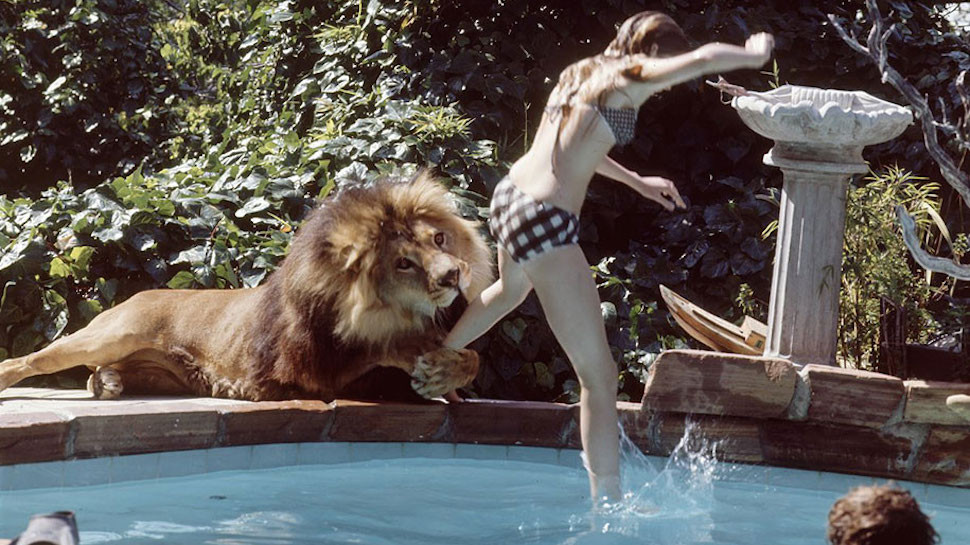 Tippi Hedren and her husband, Noel Marshall, had a fondness for large cats. This fondness was so excessive that the couple decided to make a fictional, scripted film based around said animals, one that flaunted a cast of real tigers, lions, and cheetahs alongside human actors.

Hedren and her husband consulted with multiple animal trainers, all of whom insisted that such beasts can’t be placed together and expected to perform for cameras: lions, for example, need to be slowly introduced to each other, one by one, to ensure they don’t viciously fight. Hedren and Marshall ignored this advice, and Roar officially commenced shooting in 1976.

It was filmed at Noel Marshall’s ranch in Acton, California – the story is set in Africa and, to his credit, Marshall almost single-handedly created a convincing African landscape within the United States. Including pre-production, the movie took eleven years to make, eleven painstaking, perilous years, and many involved suffered serious injuries. Director/star Marshall undoubtedly suffered the worst, his accumulating wounds plainly evident in the finished film: Roar is basically ninety minutes of Noel Marshall being brutalized by massive animals (he developed gangrene).

Melanie Griffith, Hedren’s daughter (only 17 when her scenes were filmed), was mauled and required 50 stitches in her face. Legendary cinematographer Jan De Bont was scalped, receiving 220 stitches (ever the professional, he actually returned to finish the picture after recovering). Assistant Director Doron Kauper had his throat torn open and almost lost an ear. In all, it’s estimated that over 85 people were injured on the set of Roar, which must hold the distinction of being the most dangerous film production ever (it’s worth noting that not a single animal was harmed).

Despite all the blood, sweat, and pain poured into its creation, Roar failed to secure an American theatrical release, debuting in Europe in 1981 to dismal reviews. It finally saw a limited stateside release over thirty years later, in 2015, courtesy of Drafthouse Films. No other motion picture is quite like Roar. There’s no mistaking the fact that what you’re seeing is very real, that the cast and crew were in legitimate danger at all times. Tippi Hedren wrote a book in 1985 entitled The Cats of Shambala that covers the history of Roar in great detail, and it’s a fascinating read.

July 23, 1982, one of the most infamous dates in cinematic history. In the early morning hours of that day, the lives of two young children and a screen legend were tragically cut short on the set of Twilight Zone: The Movie. For a scene that featured actor Vic Morrow rescuing two Vietnamese children from a hellish war zone, director John Landis requested a vast amount of pyrotechnics, explosions and fire filling the air, an apocalyptic sight to behold.

While shooting, one particularly enormous blast knocked debris into the blades of a helicopter hovering overhead; the machine collapsed onto Morrow and the two children, killing all three. It’s difficult to imagine this terrifying moment, the sheer horror and panic those present must have felt as the dust settled and they collectively realized that three people lay dead before them. The young victims, Myca Dinh Le (7), and Renee Chen (6), were the children of Asian immigrants with no connections to the motion picture industry. They were hired illegally, and did not possess the required permits.

Veteran actor Vic Morrow, known for Blackboard Jungle and his role in the popular TV series Combat, was certain that Twilight Zone would provide him with the perfect opportunity for a comeback after several quiet years. Landis, along with several others (including the helicopter pilot, Dorcey Wingo), were charged with manslaughter and offered to plead guilty to violating child labor laws if the more serious charges were dropped; the DA’s office declined and proceeded with their case. Landis and his codefendants were eventually found not guilty, after a heavily publicized trial lasting ten months, in 1987. 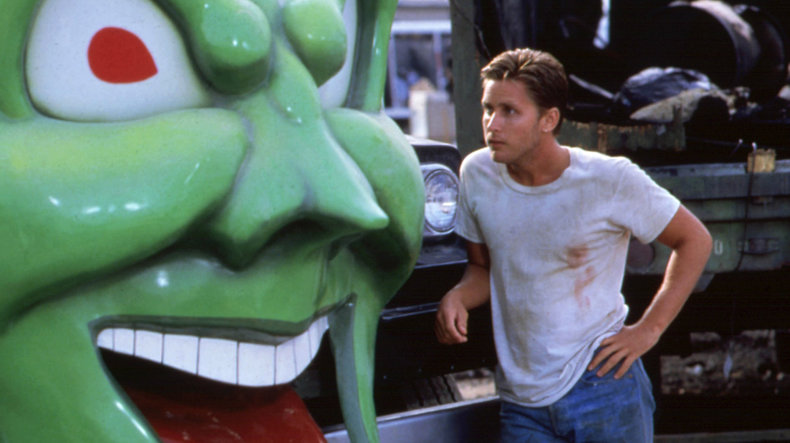 Stephen King has adapted many of his books for the screen, but he’s only directed one feature film – 1985’s Maximum Overdrive. At that time, King was experiencing an unparalleled rush of prosperity, with a slew of novels breaking sales records one after the other; simultaneously, he was struggling with a full-blown cocaine addiction. He would later state that he was “coked out of his mind” for the duration of the Maximum Overdrive shoot.

The film, based on King’s own short story “Trucks”, involves every machine on earth suddenly coming to life and attacking human beings. On July 31, 1985, filming was in progress on a scene involving a malevolent lawnmower (that’s King for you) when a block of wood found its way into the whirling blades, sending splinters flying in every direction.

Director of Photography Armando Nannuzzi was struck in the face and, as a result, lost his right eye. He sued King for nearly $20 million, and the case was eventually settled out of court. Nannuzzi would go on to shoot one more picture in spite of his handicap, Roger Corman’s Frankenstein Unbound, in 1990.