Every once in a while, you watch a great movie and notice this little thing in the opening credits  –  “Based On”, or maybe “Inspired By”, and in some rarer cases, nothing at all.

These are the films where most seem to have forgotten to look down at those titles, and either don’t remember or haven’t seen the original cinematic source material. 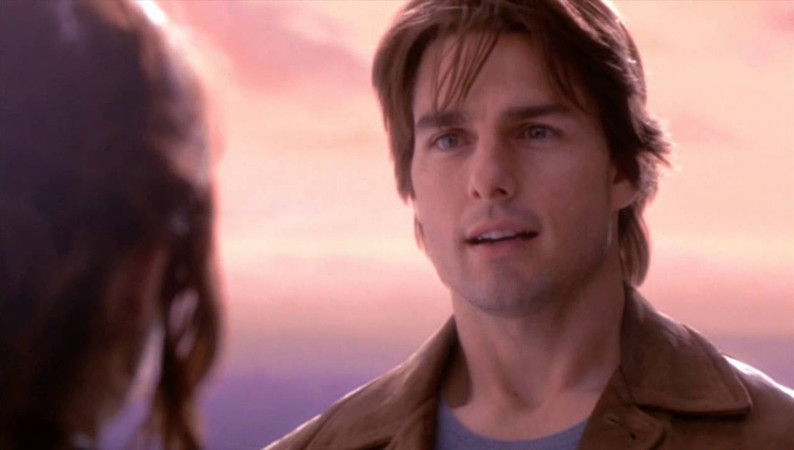 Still unbeknownst to many, “Vanilla Sky”, written and directed by Cameron Crowe (“Almost Famous”), is an almost word-for-word remake of 1997’s “Abre Los Ojos” (“Open Your Eyes”), a film directed by Alejandro Amenàbar and co-written by himself and Mateo Gil (they both worked together again on “Mar Adentro”, winning the Academy Award for Best Foreign Language Film in 2004).

It is a brilliant, taut, atmospheric psychological thriller incorporating sci-fi elements, counting the tale of César’s (Eduardo Noriega) tragic, sweet, and ultimately ephemeral encounter with Sofia (played in both versions by Penelope Cruz).

Although clearly not straying far from the source material, the American version tries all too hard to find meaning for itself – a purpose for existence – whether by intensifying the editing to try gain an edge, making the side characters (especially Jason Lee’s Brian Shelby) more sympathetic, making both Sofia and Julie (Cameron Diaz) more eccentric, or simply trying to throw money at the screen by adding an effect here or a nice car there (a baseless act, considering that the script is written in a manner which does not require expensive set pieces or props). It’s small in nature; it focuses on the interpersonal relations between the characters and their psychology, not where they are or what they do.

That’s not to say that the 2001 version is worthless; Tom Cruise delivers a memorable performance as David Aames (Eduardo Noriega’s counterpart), the dynamic editing does often work to the film’s advantage, the fact that David is now afraid of heights gives new meaning to the climax, and the anti-consumerist motif is slightly stronger.

However, the film does not deliver on a multitude of factors present in the Spanish version: genuine emotional honesty between characters (between César, Sofia, Nuria, and the doctor); the subtlety in the performances, dialogues, and plot; the psychological realism; and the dark tone.

All of these things are somehow missing in Crowe’s feature. A perfect example for the strange choices made is that in the American version, David, after his accident, is the one who tells Sofia not to come, whereas the Spanish version has her not come to see him due to her own discomfort.

This latter choice is much more powerful, emotionally speaking, as César then has another reason to be disheartened, thus adding more realism, depth, and dramatic potential to the characters. Crowe changes this, which would’ve been fine had he gone in a different direction or shown it in a different way, but he merely uses it as a write-off, a superficial explanation as to why she wasn’t there.

Although most people know that the 2011 film “The Thing”, directed by Matthijs van Heijningen Jr., is a remake/prequel of the eponymous 1982 classic by John Carpenter, many do not remember that the 1982 version is in itself a remake of “The Thing From Another World”, directed by Christian Nyby (and an uncredited Howard Hawks and Ben Hecht) in 1951, based on the 1938 novella “Who Goes There?” by John W. Campbell, Jr.

There’s no doubt about it; however, Carpenter’s version is not only superior to the other films on several levels, but it’s also the closest in its representation of the original source material. Even though the 1951 version became a classic in the horror film community, it lacks part of what made the novella so interesting; a shapeshifting alien, and a tense situation with characters with which the audience could relate.

The 2011 version, though it brings some new elements (a more diverse cast and a new plot thread), wastes a lot of its own time with cardboard cut-out characters, a development of suspense arrested by jump scares and fake outs, and, even though it was produced some three decades after the 1982 version, it suffers the crippling handicap of having poor effects. Poor computer-generated effects. This is especially embarrassing considering the fact that Carpenter’s version had some of the best practical effects of its day, which do more than hold a candle to its modern constituents.

BONUS: In 1972, Eugenio Martín directed the British-Spanish co-production “Horror Express”, another remake of “The Thing From Another World”, adapting the setting from the claustrophobic cabin to a train, and the monster takes the form of a shapeshifting energy found in a Yeti-like creature found by Professor Saxton, played by Sir Christopher Lee, accompanied by friendly-rival Dr Wells, portrayed by Peter Cushing.

These two classic Hammer horror stars save the film from itself and render it hilariously watchable, infusing the movie with a dry British humour, and the reinforced motif of science versus religion making the actors embrace their inner evil scientists is at times truly amazing to watch.

When watching the dark, beautifully shot, and eerie 1981 thriller “Outland” – starring Sean Connery as Marshall O’Neil – one can’t help but think “space western”. You wouldn’t be wrong, writer-director Peter Hyams (“Capricorn One”) originally wanted to make a western, but was told the genre was dead. Luckily for moviegoers, he realised that nothing ever truly dies, it simply changes form.

The choice of basically adapting the 1952 multiple Academy Award-winning classic “High Noon”, directed by Fred Zinnemann (“From Here To Eternity”) and written by Carl Foreman (“The Bridge on the River Kwai”), to a grimy science fiction setting was a fantastic idea. Not that it surpasses, nor is it any worse than the original – the two cannot be truly compared, as they’re two pages from completely different books.

They share a basic thematic, and the motif of a man’s pride for his job and conviction getting in the way of him leading an ordinary life, but “Outland” distinguishes itself in several ways. Hyams even wrote in subtle but technically radical differences within the premise to show us that this isn’t the same film as its predecessor.

The marshal is new to the station; he’s not retiring; he isn’t a newlywed, but recently separated; and the people of the mining colony dislike him, unlike the townsfolk of “High Noon”, who still mostly appreciate their sheriff.

These superficial differences, however, are a simple marker for the true differences that split the films – their styles. Each film is watched and enjoyed for different reasons.

One watches the original to see an introspective film with a quiet sense of suspense, stemming very much from the cinematography, the editing, the beautiful score by Dimitri Tiomkin, and Gary Cooper’s brooding performance as Marshal Will Kane. One watches “Outland” for the thrill, the gorgeous visuals (achieved for the first time using Introvision) and sets, and the rich, ominous sound mixing. And needless to say, Connery’s golden voice is always a plus.

BONUS: Many consider “High Noon” almost a remake of the 1929 Victor Fleming film “The Virginian” due to the recurring motif of the good cowboy faced with a moral quandary (it is also coincidentally Gary Cooper’s first feature film role). “The Virginian” stems from the eponymous 1902 novel by Owen Wister, which spawned several other films of the same name in 1914, 1923, 1946, and a television series in 1962.

In the everlasting tradition of American remakes of European (in this case, French) films, James Cameron’s “True Lies” (1994) is indeed a remake of the Claude Zidi (“Les Ripoux”) 1991 film “La Totale!”, about a secret agent with a disintegrating family life.

Both films carry their own type of charm. “La Totale!” has this quaint aspect to it; the honesty in the characters’ interpersonal chemistries make them more believable and subsequently relatable, especially the banter between François (Thierry Lhermitte) and Albert (Eddy Mitchell).

That being said, there’s nothing to quite match the effect produced in watching Arnold Schwarzenegger in his prime, in an action comedy – if you like it, you like it. Cameron’s version is also bigger in every aspect, because this is where having a bigger budget actually helps (not the case for “Vanilla Sky”, for example), and it also has a more consistent structure, which aids the film in tying up the daughter subplot (replacing the son of the original), which had been left dangling in the French version. 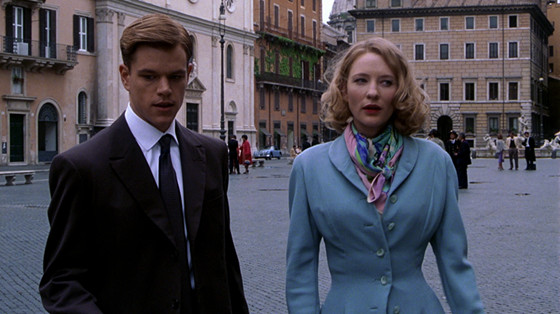 First things first, though the 1999 version is in fact much truer to the novel, “Plein Soleil” has many factors which widely differentiates it from its American counterpart. The acting in both films is nothing short of fantastic – especially the two lead actors, Delon and Matt Damon as Tom Ripley, both giving different performances, each having their own strengths and weaknesses.

Minghella’s film has a more consistent structure, with a clearer introduction showing Ripley being hired by Mr. Greenleaf (James Rebhorn) to retrieve his son Dickie (Jude Law), giving us greater insight into Ripley’s opportunistic psyche, as well as a better, more nuanced ending than the 1960 version, whose third act falls flat after a brilliant first two. The jazz-riddled soundtrack in the newer version also helps bring us into the times of the film (and thus the times of the novel).

Nevertheless, in what are arguably the two most important moments of the story – the murders of Philippe (Maurice Ronet in the 1960 film and Jude Law’s counterpart in the remake) and Freddie (Billy Kearns in the original and a brilliant Philip Seymour Hoffman in the remake) – “Plein Soleil” far outshines “The Talented Mr. Ripley” with its brilliant direction and editing.

The murder scene between Damon and Law seemed coerced and inauthentic, rendering it almost comedic, whereas Clément completely changes the dynamic of the scene by having Philippe know about the fact that Tom wishes to kill him, adding a whole new layer of tension to the scene, and subsequently the film.

We could also look at how the macabre counterpointing between Freddie’s murdered corpse bleeding with a family having a normal day nearby adds a new dimension by showing us not only the regret that Tom carries and his yearning for a simpler life, but also exemplifying our own ignorant naiveté in an often cruel world.

BONUS: Highsmith’s novel was initially adapted to the small screen in a 1956 episode of the anthology series “Studio One” (1947).