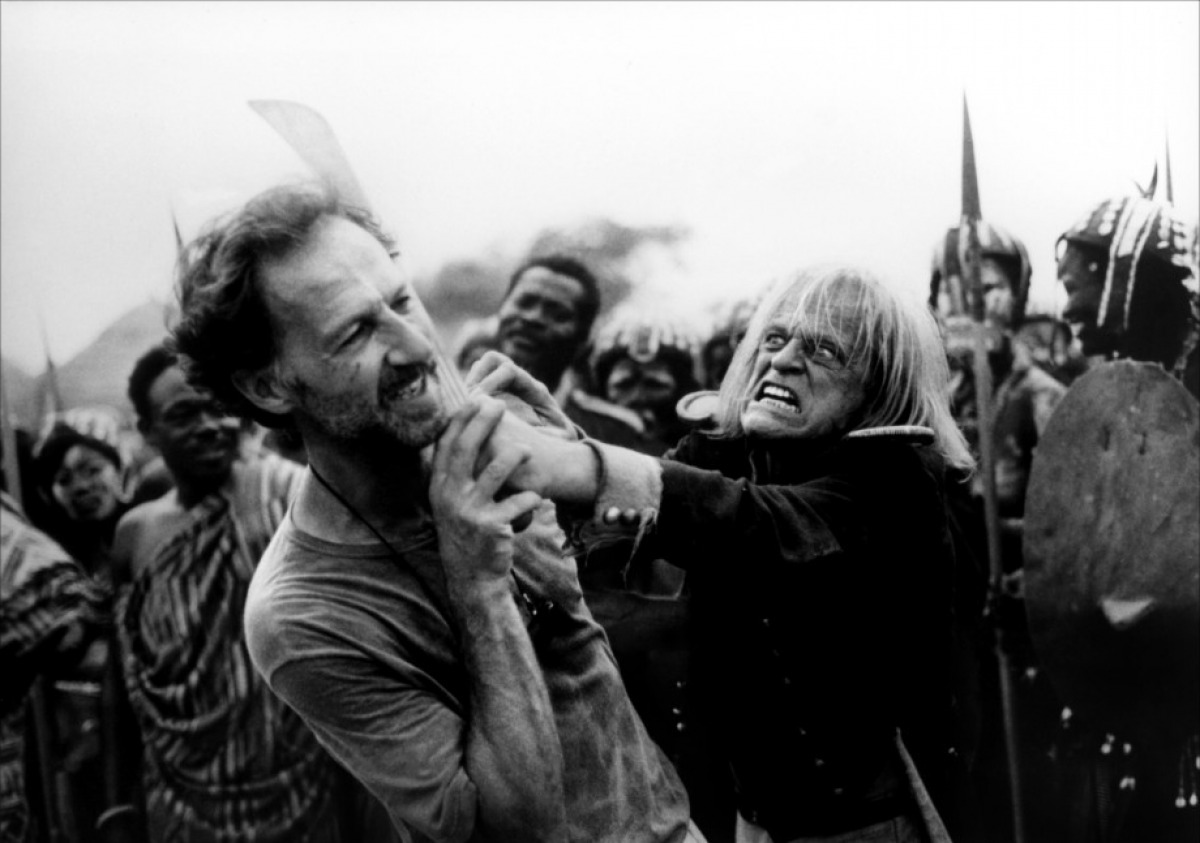 Movie-making is a grueling experience under the best of circumstances. Even those productions that go off without a hitch entail hours upon hours of hard work from everyone on board, from the upper-echelon A-lister to the lowly (but essential) craft services guy. So as you can imagine, tempers often flare on-set, with sometimes hilarious results.

The following feuds prove that artists are willing to go to great lengths to get their points across. This can entail engaging in an all-out brawl, brandishing weapons, or just tormenting the object of scorn until mental collapse is imminent. 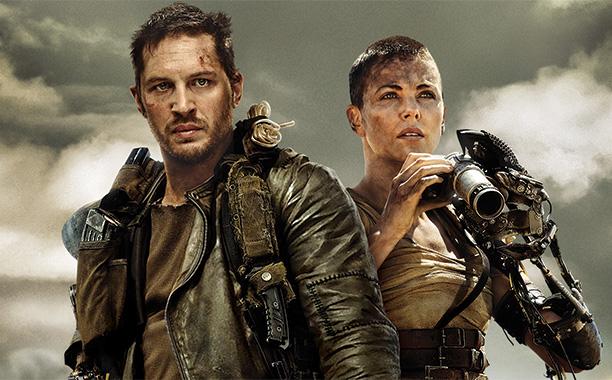 Charlize Theron and Tom Hardy are two of the most highly respected popular actors working today, so their pairing on the long-awaited Mad Max: Fury Road was met with a decent amount of enthusiasm. In spite of all this good buzz, it seems that the two leads weren’t overly enthused when working with each other.

With original Mad Max director George Miller at the helm once again, the film seemed to be a decent addition to the series. The effects looked amazing, and once again Max was a catalyst for other characters within the film to achieve their goals. However, filming was incredibly tough for all involved due to the expansive set pieces and demanding stunts.

These conditions may have explained the tension that existed between Theron and Hardy during filming. Hardy is also known to be highly dedicated to his craft, which could have been a factor in his cold attitude towards Theron (considering they play rivals in much of the film). Theron alluded to the fact that they did not get along, which she attributed to the tough work environment.

For all the press surrounding the supposed rift, very little evidence exists pointing to any real hatred or offense taken by either Theron or Hardy. Hardy even gave Theron a parting gift acknowledging their differences but praising her for her awesomeness, and Theron expressed appreciation for Hardy’s honesty despite their personal issues. 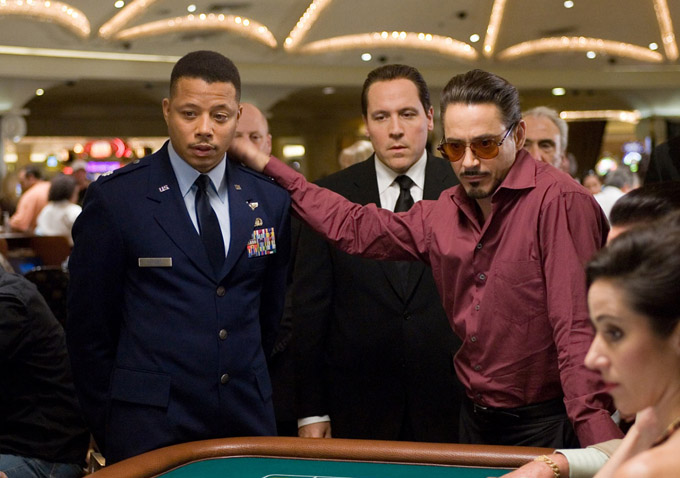 Iron Man legitimized Robert Downey Jr. as a bona fide star after years spent struggling with addiction. Terrence Howard, his co-star in the original Iron Man film, claimed responsibility for getting studio bigwigs to take a chance on Downey despite his past troubles. Howard then expected a favor returned during contract negotiations for subsequent Iron Man movies. This resulted in Howard being ousted for his admittedly difficult manner, with the far less ornery Don Cheadle taking over the role.

As with all juicy Hollywood rumors, there are rival interpretations as to what exactly happened. Some say Howard’s earnings from the first film exceeded the rest of the cast, and accordingly he was asked to take a pay cut. In contrast, Howard claims that Downey took the money that was supposed to go to him and had Howard cut from the film.

The unconventional actor is also well-known for making some insane pronouncements to various publications. These include his discovery of why soap bubbles take a round shape, his development of a mathematical theory known only as Terryology, and the fact that he commonly knocked around his ex-wife for most likely imagined offenses.

Howard has found success on TV through the hit show Empire, while Iron Man was responsible for reigniting the Marvel Comics Universe. Accordingly, the Howard-Downey feud remains an amusing little blip on the entertainment radar that gets rehashed when the actor does or says something else insane. 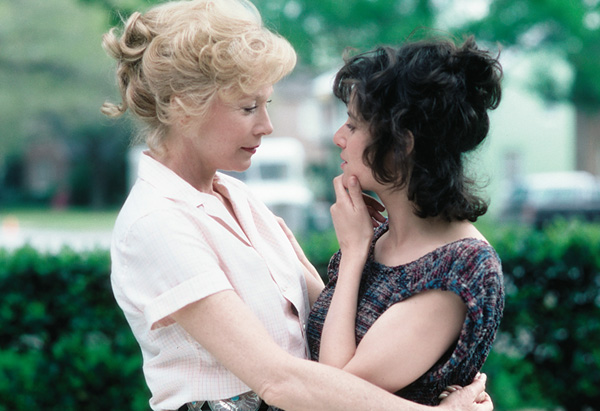 Debra Winger has a somewhat touchy reputation throughout the movie industry. During the 80s, rumors of the actress feuding with virtually every costar were rampant. This was certainly true of Terms of Endearment, a 1983 film in which Winger starred with Shirley MacLaine.

While the film was the sort of sappy, sentimental Oscar-bait so loved by the Academy, the climate on the set was far less forgiving. Winger and MacLaine were at odds for most of the filming, culminating in an alleged incident where Winger supposedly farted in MacLaine’s general direction. While this has never actually been corroborated by either actress, the ill-will that they held towards each other extends to this day.

Some posit that Winger’s rebellious attitude was to blame (the actress was quite outspoken about Hollywood’s treatment of women at the time), while others claimed that veteran actress MacLaine didn’t appreciate being upstaged by Winger, who at the time was a darling of both the media as well as movie-going audiences.

No matter the underlying cause of the tension, MacLaine eventually won out when both actresses were up for Best Actress in 1984. MacLaine’s triumphant “I deserve this!” upon winning most likely gave a clue to her real feelings about the trying affair. 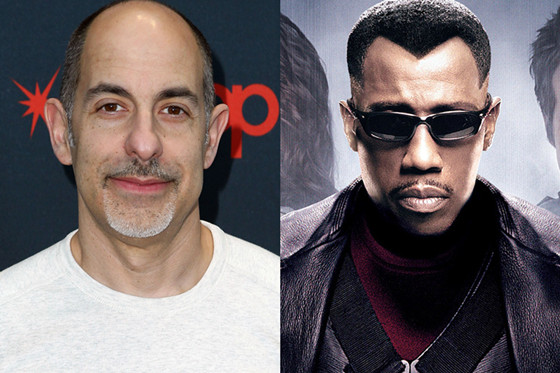 After writing the first two Blade movies, David Goyer was invited to direct Blade: Trinity, which saw the return of star Wesley Snipes. Whatever career credibility Snipes once had (including starring roles in acclaimed films like Jungle Fever and New Jack City) was squandered by this point thanks to his increasingly erratic behavior. Stories from the set only shore up Snipes’ bizarre deeds, many of which were targeted towards Goyer.

Co-star Patton Oswalt claimed that a misunderstanding over an extra’s t-shirt led to Snipes accusing Goyer of racism just before attempting to choke the director. Snipes also heavily relied on his stand-in to complete most of the filming, preferring instead to remain in his trailer and smoke marijuana (according to Oswalt).

Goyer for his part didn’t take the slights lying down. After meeting a group of bikers during a night out, Goyer invited them back to the set under the auspice that they were his body guards. He also suggested that since much of the filming was completed already Snipes was free to quit any time, which caused the unhinged star to become even more paranoid.

In addition to demanding that cast and crew refer to him as Blade, Snipes’ preferred method of communication with Goyer involved passing post-it notes back and forth. He would sign all notes addressed to the director as his character, which was purported to be the source of much hilarity for everyone working on the movie. 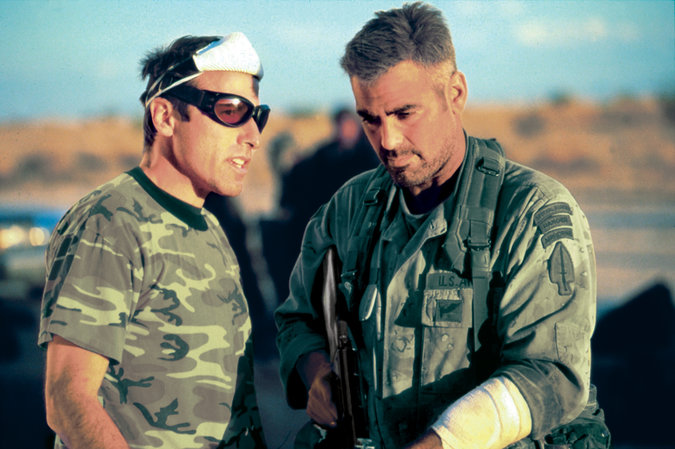 Three Kings, the critically acclaimed war dramedy starring George Clooney, Ice Cube, and Mark Wahlberg, is perhaps most remembered for the epic spat that occurred between Clooney and director David O. Russell. Russell has seen his fair share of rumormongering related to his prickly reputation. Some actors have even sworn off working with the director again, including Amy Adams and Clooney himself.

There are conflicting stories as to what actually occurred on set. Clooney was not Russell’s first choice for the lead, and some claimed that this led to consternation between the two. According to Clooney Russell was a bully on the set, abusing extras and failing to show the proper amount of concern when one of them suffered from an epileptic fit.

These ill-feelings culminated in an actual fist fight between the two when Russell acted out some fight moves on an extra. This caused Clooney to step in, which led to a brief altercation and caused the assistant director to tender his resignation on the spot. Russell (and others) maintain that he was only showing the extra how to perform a particular move, while Clooney saw it as an attack on the helpless extra.

While the truth of the matter most likely lies somewhere in the middle, co-star Ice Cube said the uptick in tension turned out to be a boon for the movie. Despite his reputation, Russell continues to receive accolades for his work and Clooney is one of the most recognizable and well-paid actors in Hollywood today.