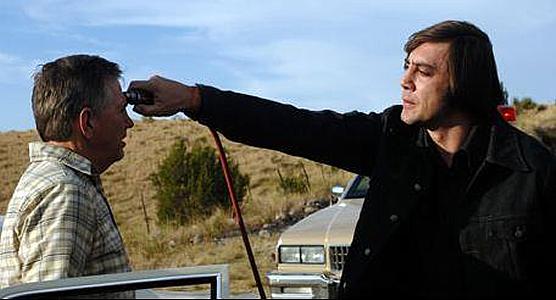 One would think the job of being a prop master or weapon designer would have to be one of the most fun and interesting jobs in Hollywood these days with virtually anything being possible only being limited by your imagination.

In thinking through some of my favorite movies, there have been many cool, memorable weapons. Some pack quite the punch, some are cool in design and the way they work, some are different versions of other weapons we may have seen in movies hundreds of times.

The realm of sci-fi/fantasy definitely has the advantage of being able to think of any configuration imaginable, not having to rely on any convention or even if it physically works or not.

For the purposes of this list, the focus was on some of the iconic, but also some of the more unusual.

James Bond movies in general could have formed their own list since Bond visited Quartermaster “Q” branch in almost every film and was continually supplied with various gadgets and gizmos throughout the franchise history.

Also, another group of films excluded from this list specifically were superhero or comic books films. Otherwise, the list would have only mainly consisted of Thor’s hammer, Captain America’s shield, Wolverine’s claws, etc.

When it comes to guns and ranged weapons, Hollywood history has been filled with thousands of gangster and war films which use a varying array of weapons.

Similarly, the world of swords and blade weapons is vast in Hollywood history with many films showcasing them in action including classics like the “Robin Hood” films, “Highlander”, “The Princess Bride”, “Rob Roy”, “The Seven Samurai” and many others.

The “Lord of the Rings” trilogy and “Hunger Games” films also contain many cool swords, blades and bow and arrows.

Having said all that, the following list were some of my favorites:

30. The Man with the Golden Gun 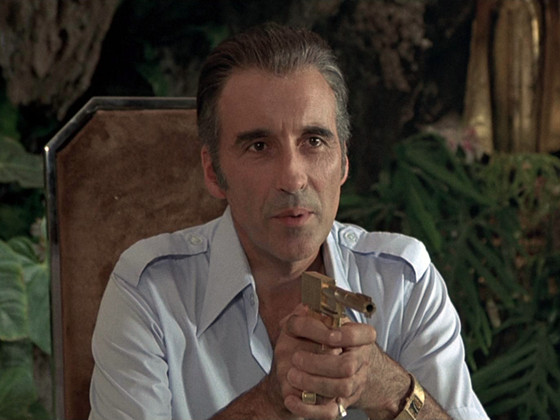 One of the cool things about this gun is that it breaks down into 5 handy components including a cigarette case, a lighter, a pen, cufflinks and a single bullet for easy storage or concealment.

No one knows what happened to the gun once Scaramanga is defeated. It is presumed lost on his island.

The weapon: The ZF1

When Emanuel Zorg (Gary Oldman) is trying to sell this cool weapon to potential buyers, he shows off some of its awesome features including arrow launchers, a flame thrower, ice thrower and targeting launcher having every subsequent round return to the same target after the first round is fired.

Certainly this one will impress your friends and make you the life of every party! 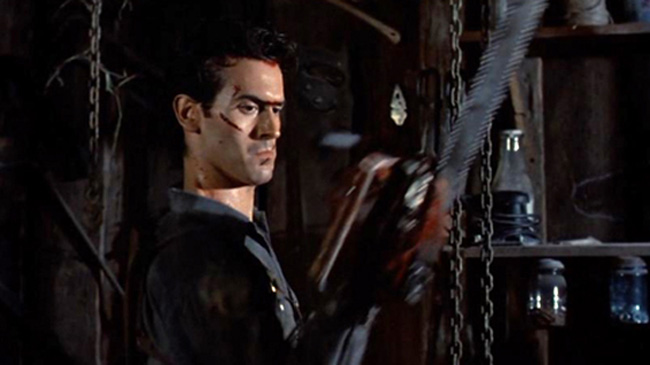 While preparing for battle against demons and other undead minions, Ash (Bruce Campbell) decides to make use of his stump arm by adding a makeshift weapon.

He fashions a clamp on his wrist and adds a motor and chainsaw blade. He then uses his newly formed hand weapon to saw off the end of a shotgun to complete his arsenal. 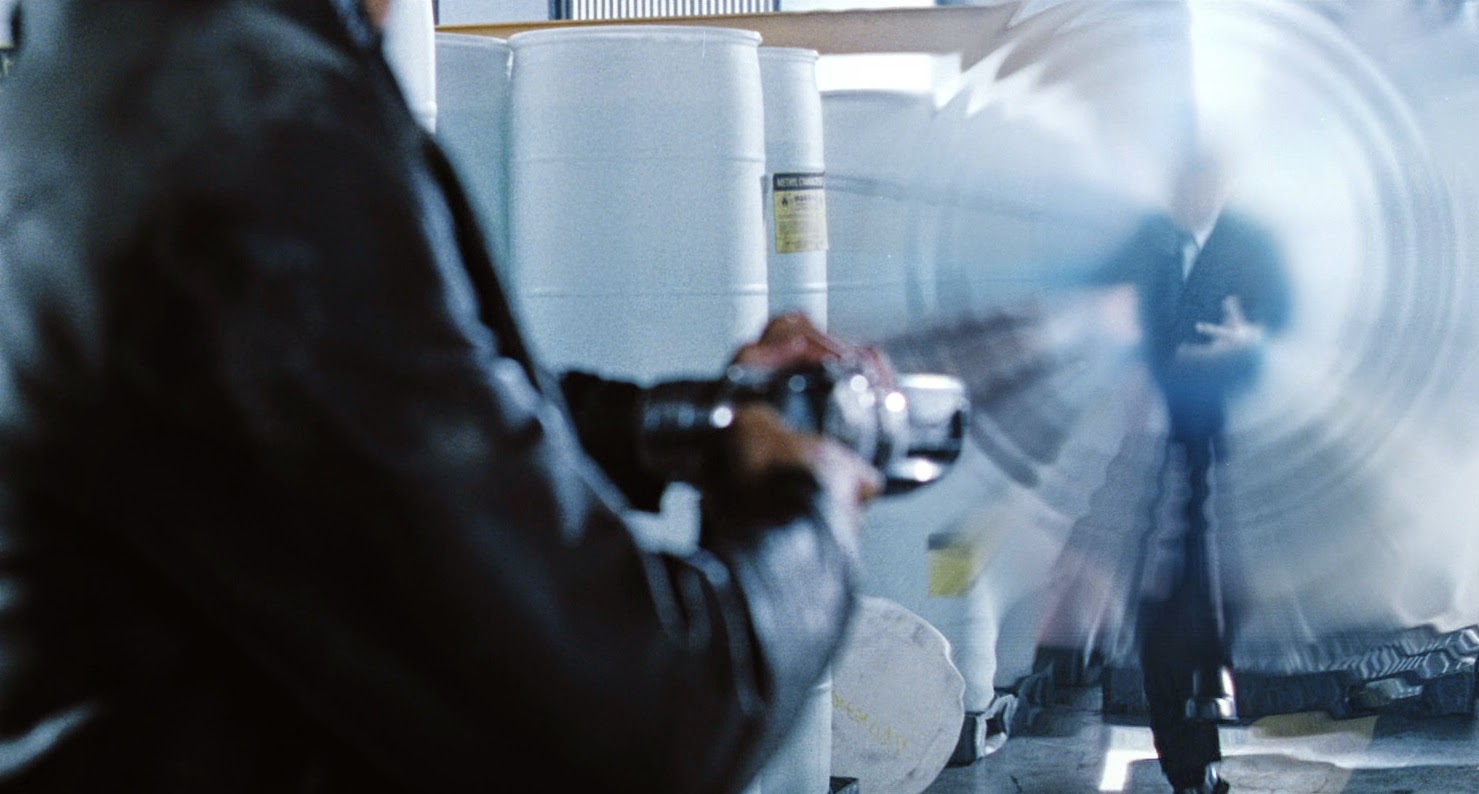 Not a lot of explanation is given to this one; however, it is used by a member of the Precrime division while in pursuit of its former head John Anderton (Tom Cruise) when it is revealed all may not be as it seems and Anderton is accused of murder.

It is as cool as it sounds when it blasts a charge of compressed air and sprawls out its victim across the room.

When Cherry Darling (Rose McGowan) loses her leg earlier in the film, it is replaced by a machine gun/rocket launcher which she can not only use to walk, but dispense baddies at the same time.

Who doesn’t want to see a scantily clad hot chick mowing down bad guys while swiveling around on the ground using her machine gun leg?

Director Robert Rodriguez thought it was a cool idea.

Director David Cronenberg is no stranger to ultra-violence in his films or in pushing the envelope and this film is no exception.

Ted Pikul and Allegra Geller (Jude Law and Jennifer Jason Leigh) are having dinner when Pikul fashions an improvised pistol made from the bones of the animals from his meal.

He then shoots his waiter in the face. The waiter whips out an ax in retaliation; however, Pikul finishes the job without another headshot.

The weapon: The Noisy Cricket 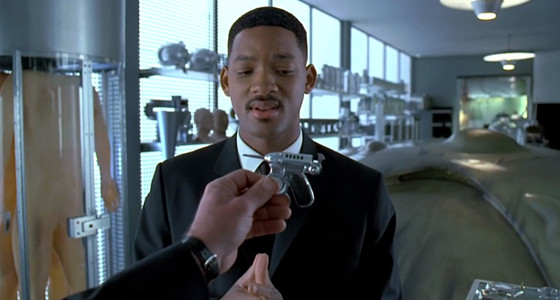 Still learning what it is to be a member of the covert extra-terrestrial prevention organization, Agent Jay (Will Smith) is unimpressed when Agent Kay (Tommy Lee Jones) hands him his diminutive weapon.

He later finds out when it comes to this particular weapon, size doesn’t matter as it packs quite the punch in taking out the bad guys and himself.

What other way can you think of to remove a house full of zombies than with the most-used lawn implement? The tool proves to be up to the task as it “mows” through its victims with ease.

Lionel (Timothy Balme) is anxious to get his home back to normal and figure out if he can save his mother who has been bitten by an African mutant monkey. 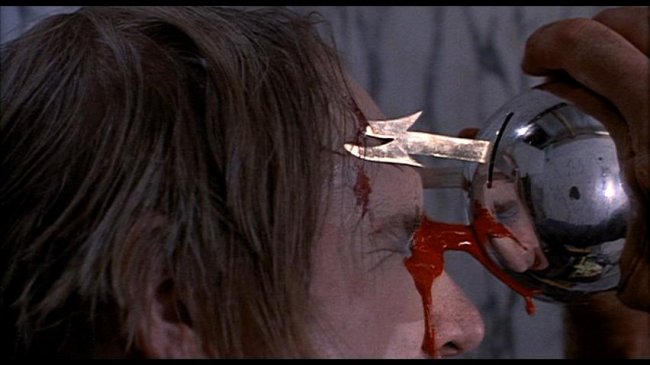 Mysterious weird guy grave robber “The Tall Man” (Angus Scrimm) goes up against Mike (James LeGros) and other various teenagers as they try and stop him from his evil schemes and turning people into his evil dwarf slave army.

The spheres fly through the air controlled by “The Tall Man” slicing, dismembering and imbedding themselves into their victims on his evil whims.

The weapon: The ARC Gun 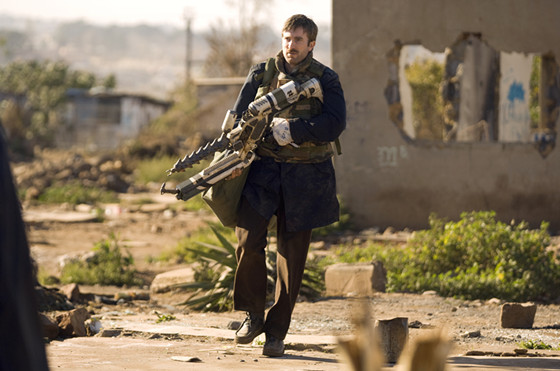 One of the cool things about the alien weapons from “District 9” is that only the aliens can use them. This becomes important when Wikus (Sharlto Copley) loses his arm through mutative degeneration and he becomes one of the only humans who can use this technology. Scientists decide this ability is significant and he becomes a hunted man.