The times they are changing and guns are making kung fu meaningless, much like the gunfighters of the old west. Lei Kung (Chi-Liang Liu) realizes this and has disbanded his school and goes into hiding. This angers the rest of the kung fu and magic society and they send a band of killers out on a manhunt for him. The theme of the movie is appearance versus reality as there is a large amount of deception, characters acting like other characters, others that look similar, and others unsure of a character’s identity.

Despite what could be a confusing plot, there is a considerable amount of action and an importance to this film because of the weapons used. They use all 18 arms of Wushu, which are the main 18 weapons of that kung fu discipline. The action is outstanding at times, including a wonderful rooftop scene and a grand finale using almost all of the 18 weapons.

This was the first Chang Cheh movie that no longer featured the venom mob, with most of them “jockeying for space” and three returning to Taiwan to make films[18]. Cheh found a new star in Tien-Chi Cheng, who plays Shao Tien-Hao. Two rival martial arts schools have a competition when Chief Hong challenges Yuan Zeng. Hong brings in a Japanese samurai to be one of the competitors, who ends up being defeated by one of Zeng’s students

. The samurai in defeat commits suicide and has a letter sent back to Japan asking to be avenged. The five element ninjas show up and challenge the clan; consisting of gold, wood, water, fire, and earth. Not knowing of their ninja tricks, the group murdered. A female ninja infiltrates the rest of the clan and helps the ninja get in. All but one is killed and he escapes. He seeks a new master who teaches him the ninja tricks and is joined by his other students to get revenge.

This is quite possibly Chang Cheh’s most violent and bloody film, which is one reason what this film is so popular and in the realm of a cult classic. The ninja costumes and different weapons used stand out. Add to that the story of the hero creating techniques and weapons in order to defeat them makes it quite memorable. The action and fight choreography is outstanding, especially the last twenty or so minutes for the final battle. 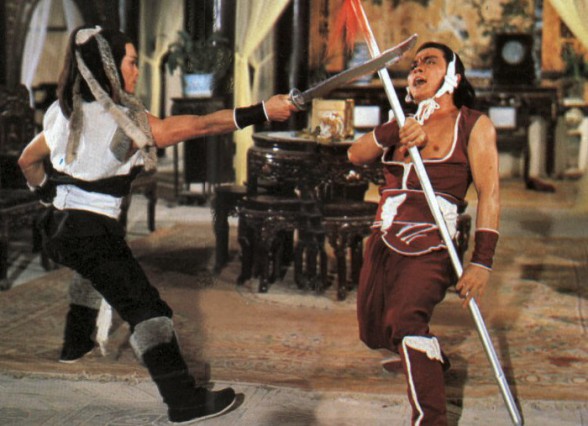 Considered to be the last Venom mob movie, this one involves the attempted heist of a valuable jade antique. The antique is located in the house of traps and no one has ever made it out of there alive, kind of like One-Eyed Willie’s treasure. A group of men attempt to break through the traps and obtain the antique on the prince’s birthday. People may lose some appendages and there could be some blood, they may need some band aids. The story is taken from the 1889 novel The Seven Heroes and Five Gallants.

The story is similar in ways to Five Element Ninjas in that the heroes must figure out how to beat the elaborate booby traps that are in the house. The set design stands out in both the regular buildings and the house of traps. Like the other venom mob movies, the choreography is top notch with each member being credited as an action director. One element that conyinues to show up in most Chang Cheh movies is the man dressed in white, most likely so that any blood would be a stark contrast.

This is a beautiful and bizarre fantasy based martial arts film that is a strange hybrid of a Chang Cheh blood fest and a G rated anime. It would almost be like if an American studio made a film that was a combination of The Neverending Story and The Teletubbies.

A mythical lute has resurfaced after some time and the possessor, called the Demon of the Lute, is going around killing all of the martial arts masters with it. The only way that it can be destroyed is by using the two other martial treasures, a fiery bow and arrow. Both have also been missing. A group of heroes is sent out on a quest to find the missing treasures and save the day, wait that’s the Lord of the Rings trilogy.

This is the definition of what a cult film is. It may be obscure or unpopular for a Shaw Brothers film, but it needs to be seen at least once in a lifetime. It has good action and an endless amount of madness; hermaphrodites, villains with extending beards and appendages, a giant pair of golden scissors, a flying disco ball, a villain with a giant red afro and his thunder flying wheels, attacking trees reminiscent of evil dead, among others. 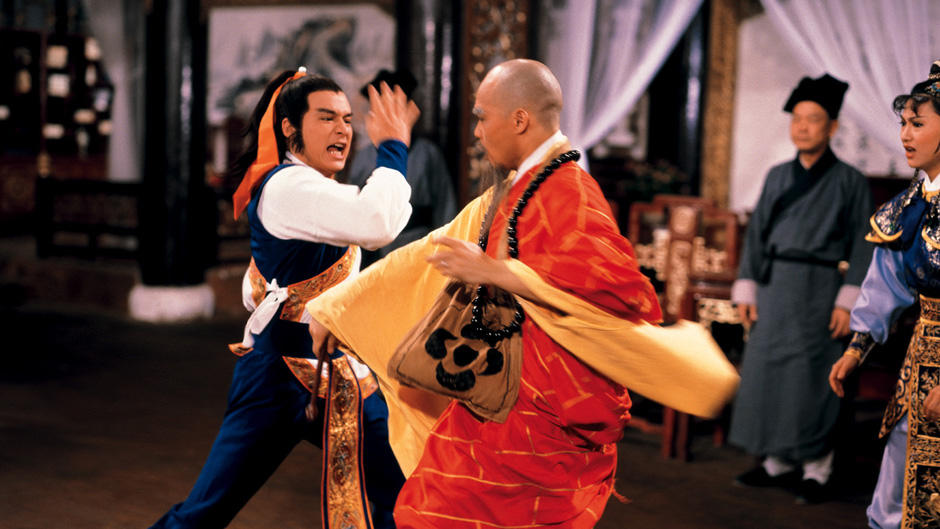 The film is loosely based on the Yang family who were defeated by the Mongols. After their deaths, the fifth brother goes to a Shaolin temple to improve his pole fighting skills in order to seek revenge. He is able to persuade the abbot to teach him the monk’s pole style. In the epic finale, he is joined by his sister and a group of monks to take on the Mongols.

This was both Chi-Liang Liu and Gordon Liu’s masterpiece. The story and acting is strong, the training sequences are excellent with the wooden wolves, it has the best pole fighting ever, and the final battle is just outstanding. Even though kung fu films were going “out of fashion;”Jackie Chan and Tsui Hark were both redefining the genre in their own way and yet this “film shows that Liu could match, if not surpass, any of his rivals”[19]. 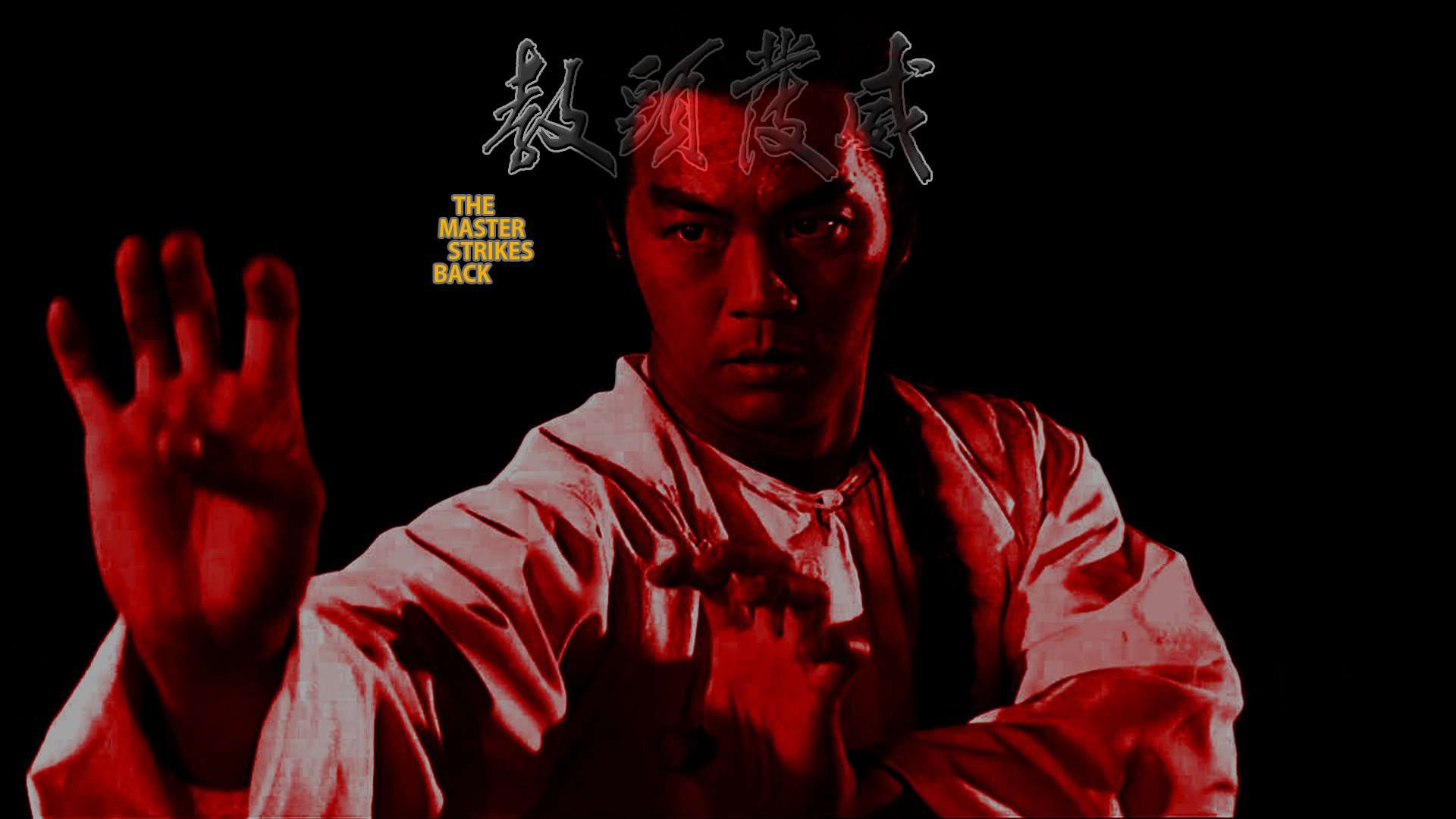 Ti Lung and director Sun Chung return for an unofficial sequel to The Kung-Fu Instructor. Famous master Tung is sent to Phoenix town to instruct the soldiers there. The emperor wants eunuchs, so his son is kidnapped by the local police and ends up being castrated. Tung then goes on a rampage of revenge.

This is a very dark tale that is more story-driven then action based. But it is still an engaging film and when there is action it does deliver. The one on one battle between Ti Lung and Chen Hui-min is simply unforgettable.

Oh, and of course killer heartbeat style and the phantom technique, which makes your heart burst out of your mouth. Cult films, eat your heart out.