Because of his superior martial arts skills, a young court official played by David Chiang is sent by the government to infiltrate a family that they believe are rebels. If he is unable to complete his mission, then his family will suffer. Once he infiltrates the family, he falls in love and marries GiGi (Cecilia Wong) and convinces her to escape. She is killed during the escape. In order to gain his revenge he learns Mantis fist style kung fu while watching a praying mantis.

Directed by Chi-Liang Liu, once again the action choreography in the film is superb. As usual, there is a great opening fight sequence demonstrating Mantis fist style set to a grey background. At times during this scene, Chiang’s shadow is shown performing the moves. This is where Quentin Tarantino got the inspiration for the part of his training montage in Kill Bill volume 2. All of the martial arts scenes are worth seeing, Gordon Liu guest stars as a Monk in a very good opening fight sequence.

8. Shaolin Challenges Ninja AKA Heroes of the East 1978

A categorical masterpiece brought to us by Chi-Liang Liu, who displays an exhibition of both Chinese and Japanese martial arts. Gordon Liu plays Ho Tao, a kung fu student who is forced into an arranged marriage with a Japanese woman. Yumiko Koda (Yuka Mizuno) knows karate and Ho Tao finds it to be violent and too masculine.

There is conflict between both of them over which country has the superior martial arts and Yumiko returns back to Japan. Ho tries to get her to return by sending a letter challenging the Japanese martial arts, hoping this would make her mad enough to return and he could prove this challenge to her. Her sensei Takano reads the letter and is immediately offended and the Japanese send a group of Karate experts to challenge Ho.

What transpires because of this challenge is simply martial arts movie magic. The combination of Chi-Liang Liu’s direction and choreography and Gordon Liu’s martial arts skill and physical ability in this film can be compared to any of the greatest filmmakers in our history. Yes, it is that good.

There are roughly thirteen fight scenes using close to twenty different weapons plus various styles of martial arts; including karate, judo, crane style, drunken style, ninjitsu, kung fu, and yes crab style. While not as well known as Bruce Lee, Jet Li, or Jackie Chan because he never acted in an American film until Kill Bill, Gordon Liu is one of the greatest martial arts actors of all time.

9. The 36th Chamber of Shaolin AKA Shaolin Master Killer 1978

“The Kung Fu Classic That Started It All!” was the tagline for what is considered to be one of the greatest kung fu films[16]. Gordon Liu plays legendary monk San Te, who starts of as a revolutionary in a local rebellion. The government kills all of those involved including their families, while San is able to escape wounded.

The shaolin monks take him in and he asks to be trained, but is initially rejected because he is an outsider. They let him stay and after a year he begins training, going through the 35 different chambers quicker than any other student and creating the three sectional staff along the way. San leaves to help with the revolution and to teach the people Kung Fu. Once he has done that, he returns to the temple and creates the 36th chamber for the common people.

For many fans and literary critics of the genre, this “ranks as one of the all-time classics of Asian martial arts films and was at the forefront of a new form of martial arts moviemaking that showcased the skill and practice of shaolin kung fu”[17]. It has influence beyond the film industry.

In Wu Tang Clan’s first album Enter the Wu-Tang(36 Chambers), there’s a line that goes “Yo Meth, where my Killer tape at” which is referencing a VHS tape of Master Killer[17]. While this may not be Gordon Liu’s greatest movie, it sent him down a path of playing a Shaolin monk for the quite some time. 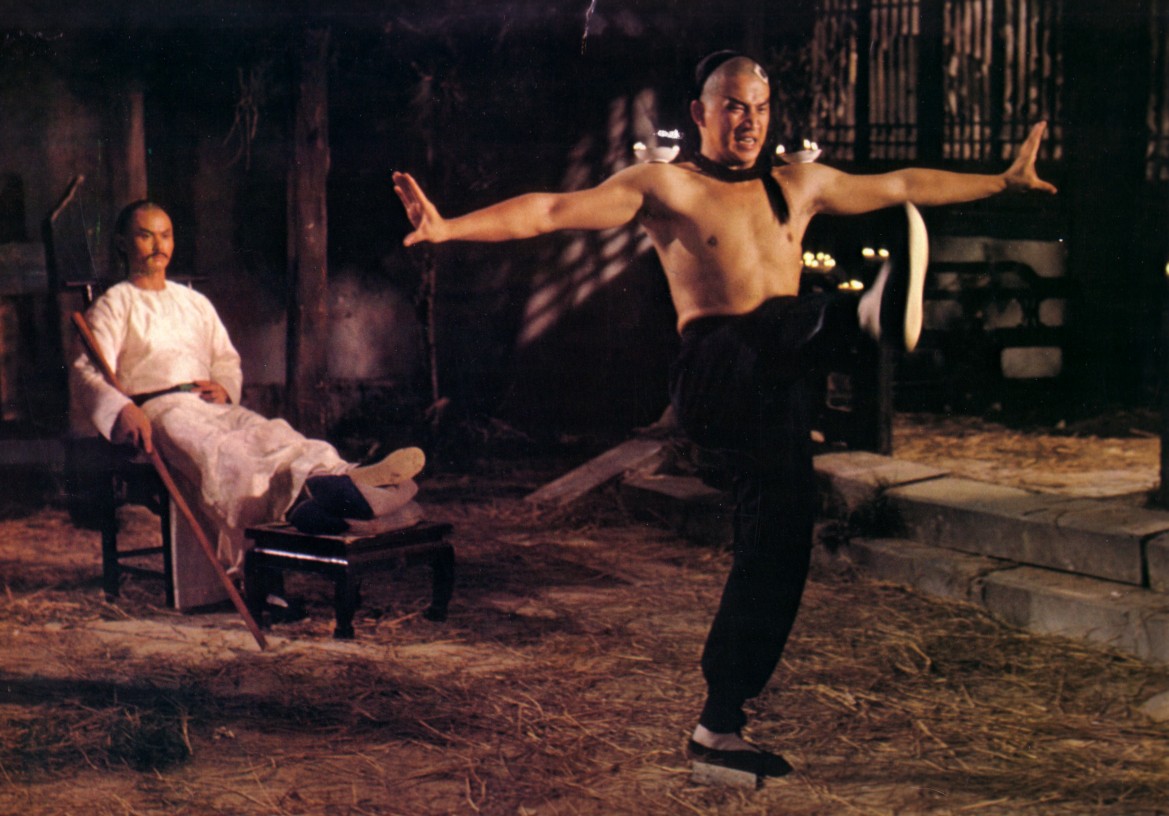 Gordon Liu plays Prince Wang, who is the 11th prince in line to rule Manchuria. He pretends to be a wine merchant with no martial arts skill. He meets Dirty Ho (Wong Yue) and enlists him as his bodyguard, because an heir to the throne is to be announced soon. Together they end up facing constant danger as the make their way to the capitol for the announcement of the heir to the throne.

This film features more comedy than previous ones from director Chi-Liang Liu, with Wang defending himself while pretending to have no kung fu knowledge. Through his years of training at the Beijing Opera and extensive work as an actor, director, and stunt coordinator, Chi-Liang Liu’s “classical intensity” really hit a peak here and the scenes are some of “the most impressive integrated demonstrations of narratives and choreographic kung fu dance”[5]. 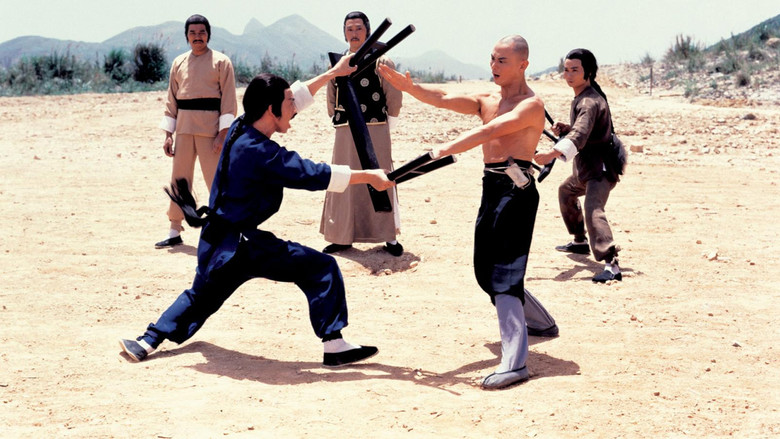 The second part of a trilogy of chamber movies, this time Gordon Liu plays Chao Jen-Cheh who ends up impersonating a monk. The workers of a dye factory receive a twenty percent cut in pay and Chao is hired to play an expert Shaolin monk.

Eventually, he is discovered to be a fake and all of the workers are punished. Because of his guilt, Chao goes to the Shaolin temple in order to train. The Master refuses, but gives him a chance to stay there and build a set of pole scaffolding around the renovations. Over the year, he spends time building the scaffold, watching the monks train, imitating there movement and learning kung fu. He returns to the village to help the workers with his new style called rooftop kung fu.

There is more comedy in the sequel in order to change things up, but it works and pays off in the end. There are amusing scenes when Chao pretends to be a famous monk in the beginning and then when he tries to do some of the Shaolin training. Chao’s process of working on the scaffolding and eventually coming up with the rooftop kung fu was original.

There is very little fighting until the end but the payoff is huge, with one of Gordon Liu’s best fight sequences. Jet Li and director Tsui Hark borrowed the pole fighting sequence for their movie Once Upon a Time in China 2.

12. Crippled Avengers AKA Return of the Five Deadly Venoms 1978 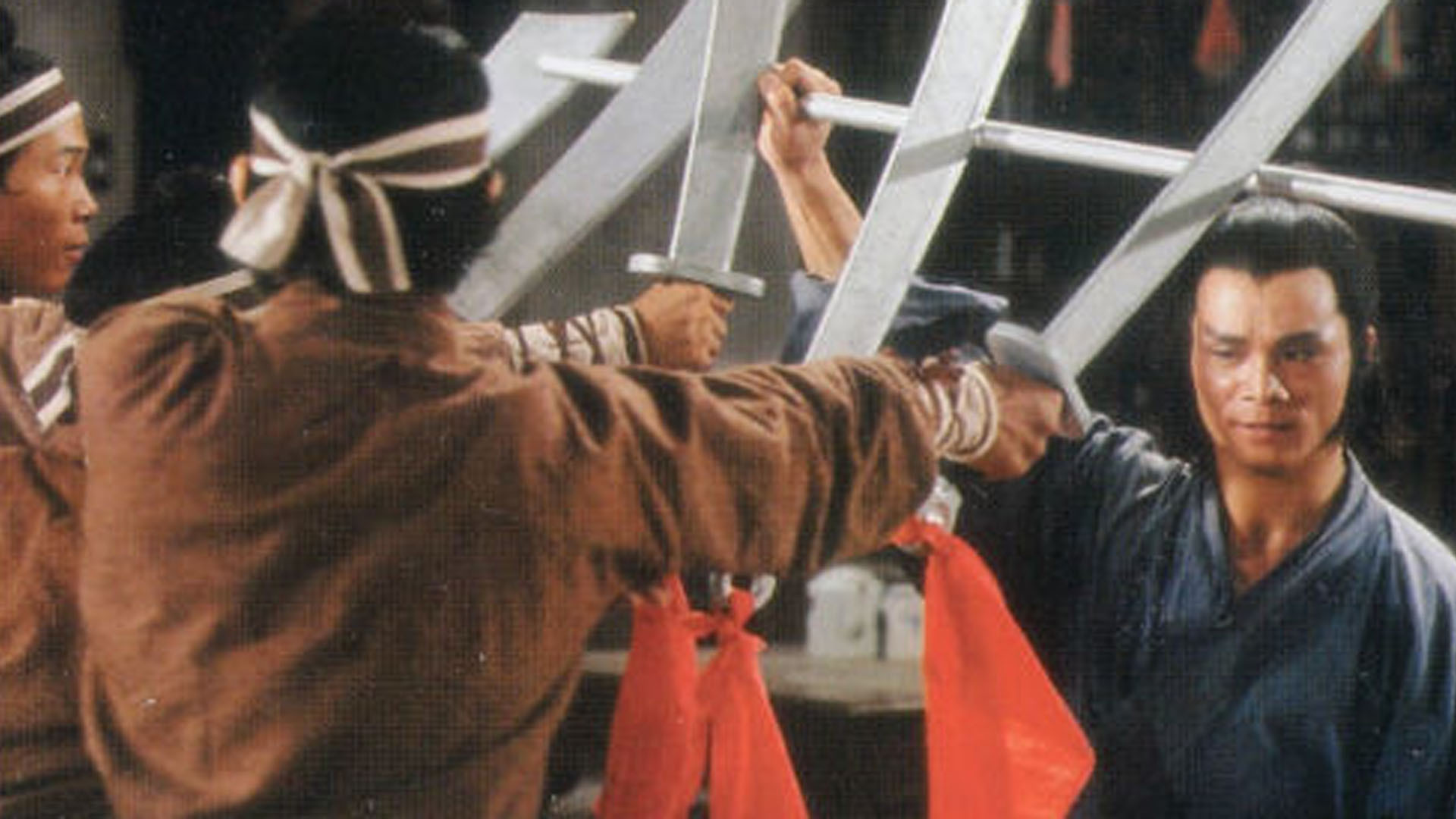 Featuring the venom mob, there is a lot of mayhem and mutilation in this action packed adventure. Tu Tin-to goes insane after his enemies kill his wife and cut off his son TuTin-chang’s forearms. Jump to several years later and Tutin has mechanical arms that stretch out and shoot darts. He also has a bad temper and cripples anyone that he dislikes, like King Joffrey from Game of Thrones. Four of these men seek out a kung fu master in order to get revenge for being crippled by the martial arts master and his son.

The story has a darkness that is similar to a Shakespearean tragedy. There are intense training scenes that showcase all of the actor’s talent and acrobatic abilities, while also focusing on the theme of brotherhood and being united. The action is simply amazing. The storyline of crippled martial artists was copied in a movie called Crippled Masters, in which actual amputees are the actors.

Pai Mei is back from the dead and he’s bigger and badder, well sort of. In a sequel to Executioners from Shaolin, Pai Mei’s evil twin brother White Lotus (Lo Lieh) is out to do bad things. The White Lotus Clan wants to kill all of the recently released Shaolin individuals and anyone that supports them. White Lotus kills everyone but Hung Wen-Ting (Gordon Liu) and his sister. Hung attempts to defeat White Lotus multiple times but is unsuccessful and Lotus arrogantly lets him escape each time.

The training sequences are very good and amusing at times. Lo Lieh is superb as White Lotus. All of the fight scenes are good, but the final fight scene is magnificent. It is as much of a fight as it is a dance, once again reminiscent of the Peking Opera.