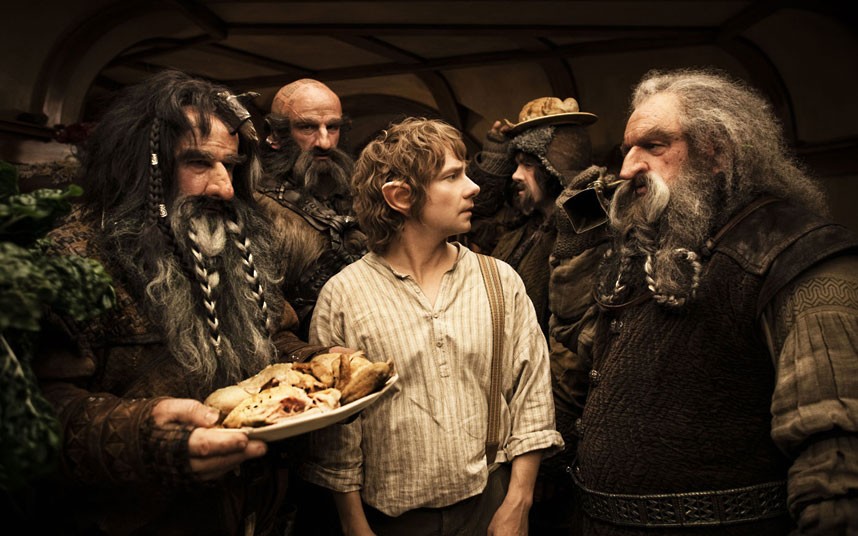 Against his own nature, Bilbo (Martin Freeman) sets off from the Shire on an adventure. From Hobbiton to the Misty Mountain he travels with a group of displaced Dwarves to reclaim their home and heritage.

On his journey he encounters trolls, orcs, goblins, elves, men, and a very frugal dragon. His substantial contribution to the reclamation of the Dwarves home under the mountain demonstrates that it does not matter how big or how small, anyone can make a difference.

In a stunning show of support for digital animation and formats, Peter Jackson screened The Hobbit Trilogy at 48 frames per second instead of the cinematic standard 24 frames per second. This had a polarizing effect on audiences, with some singing the praises of how clear the CGI looked, while others were too distracted by the frame rate-claiming it has the same visual aesthetic of a soap opera.

The decision to screen a major studio picture at 48fps shows not only faith in the technology on part of the director, but also on part of the studios. These films serve as a one of many significant landmarks in the history of digital cinema being embraced by the mainstream, and the experiments therein engaging audiences.

Sheepish cab driver Max (Jamie Foxx) picks up a fare, a hit man named Vincent (Tom Cruise), who threatens Max into driving him around from hit to hit. When one of Vincent’s targets turns out to be a woman Max had a connection with earlier in the evening (Jada Pinkett Smith), he must overcome his passive nature to save her.

An introduction of what was to come for a lot of audience members, Collateral hurled the viewer into the video-aesthetic before most associated it with anything other than home video footage.

All of the problems that come along with shooting digitally (limited exposure latitude, deep depth of field, and poor performance in low-key lighting) are all abundantly present in this film. As opposed to being detrimental however, the video-aesthetic works for this film mainly due to how digital cinema was viewed when it was released.

Michael Mann, known for The Last of the Mohicans (1992) and Heat (1995), is one of the Directors featured on this list to make the change from film to digital formats. During the time when using digital to shoot movies was considered avant-garde or experimental, Collateral came onto the scene with its gritty realism and stark, unflinching violence.

Hugo Cabret (Asa Butterfield) lives with his father who makes a living working at museum. Coming across a broken down robot and the coinciding death of his father send Hugo on a mission to repair the robot (believing it contains information). In pursuit of this, he becomes acquainted with a toy store owner Georges (Ben Kingsley) and his goddaughter Isabelle (Chloe Grace Moretz), who befriends Hugo when he takes her to the movies.

Hugo and Isabelle investigate further into the robot and find themselves caught up in a secret of cinema covered up since the end of the First World War. The Jules Verne/Steam punk environment provides a poignant anachronism as the film is shot on a digital format.

Another Director to make the switch from film to digital formats is Martin Scorsese. With a long history of shooting on 35mm Scorsese embraced digital technology with his film Hugo. Shooting on digital almost operates as a tongue-in-cheek joke on the present changing landscape of cinema-based on the film’s themes of older cinematic technologies.

Scorsese made himself at home with the opportunities available to him with digital cameras by releasing the film in IMAX 3-D. During this time, he even became an unofficial spokesman for digital cinema, falling in line with contemporary and long-time advocate of digital: George Lucas. Scorsese has shot his films on digital formats ever since, and a return to 35mm looks unlikely in the foreseeable future.

Selma (Bjork) is a factory worker in Washington State suffering from a condition which causes the loss of sight. Knowing her son has the same condition, she works tirelessly saving up to afford for an operation to prevent the loss of his sight.

She regularly engages in escapist fantasies where she imagines the world around her erupting into elaborate musical performances. When she slips into one of these daydreams at work and is fired, she then confides in her neighbor (David Morse) who takes the opportunity to steal her savings for her son’s operation. This leads to an altercation in which she murders her neighbor and is put on death row, never losing her musical daydreams.

Another Dogma 95 film and second Lars von Trier film to appear to appear on this list is the Palm d’Or winning Dancer in the Dark. It is the third instillation in Von Trier’s “Golden Heart Trilogy”; the other two being Breaking the Waves (1996), and The Idiots (1997). The critical success is not the only reason why this film has been highlighted, but also due to its grandiose photographic aspirations.

Supposedly, during filming musical scenes, von Trier had 100 cameras set-up. Whether or not this means all simultaneously filming or just on-hand is still unknown. Regardless, this level of excessive coverage is something near unachievable when shooting on film stock simply due to the coordination and operation of the equipment. This photographic accomplishment is a testament to the freedom provided by digital cinema.

The infamous “100 cameras” set-up during the filming of the musical numbers is still something that exists as folk-lore or half-truth, based on the editing rhythm of these scenes however, it is clear to see that there are several if not dozens of coverage angles from different cameras.

James Bond faces the most immediate threat to date: someone targeting MI6 directly. Bond (Daniel Craig) works together with M (Judy Dench) to track down Raul Silva (Javier Bardem), an ex MI6 Officer staging attacks against MI6 and all who are loyal to it. Eventually the conflict comes to a head at Bond’s childhood home in Scotland: Skyfall.

Beautifully shot by Roger Deakins (The Shawshank Redemption, No Country for Old Men); Skyfall is one of the more recent releases which have elevated digital films to a prestigious level, and proves that with an Oscar nomination for Best Cinematography.

The diverse color palette in this film ranges from dark reds to light blues and everywhere between, the camera work is pristine and smooth, and any and all given environments are emphasized to the best of the camera’s ability. It is masterful cinematography at its most enjoyable.

With an emphasis on practical effects over CGI, the action sequences are not tethered by over production. The result is a much more engaging viewing experience as suspension of disbelief is easier without a CGI-cluttered frame. This dedication to practical cinematography shows a respect for digital formats and their ability to match if not exceed the standard quality of film in some cases. 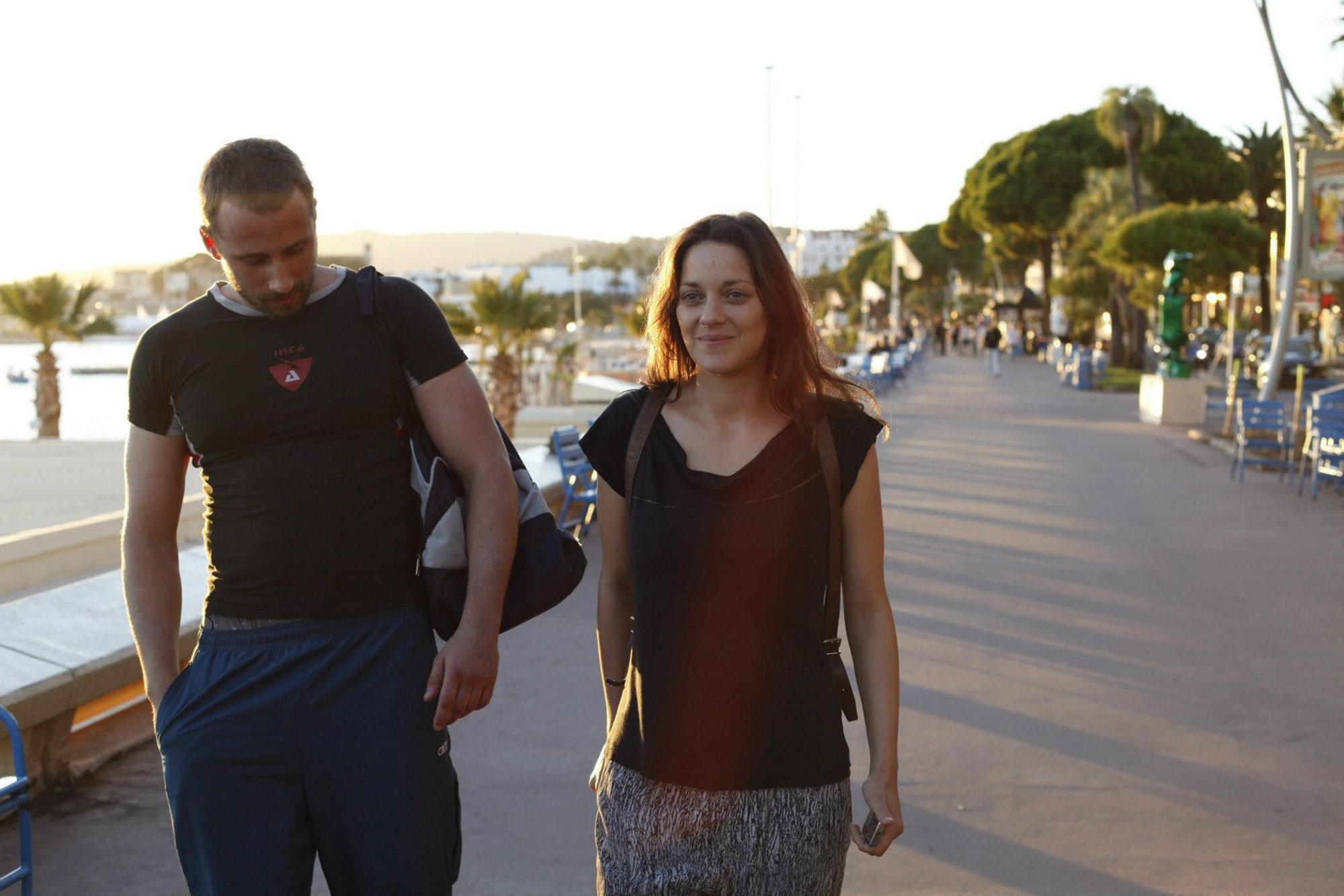 A film about a boxer and a whale trainer seems like the set-up for a cliché romance film but this sleeper from 2012 deserves to be seen. A struggling boxer (Matthias Schoenaerts) and his son have fallen on hard times after the mother left. While working as a bouncer, Alain (Schoenaerts) comes to the aid of a woman who will later play a significant role in his life.

After an accident at work involving one of the orca whales she trains, Stephanie (Marion Cotillard) loses both of her legs. Left lethargic and depressed she seeks comfort a relationship with a bouncer she has recently met.

Cotillard and Schoenaerts as the respective brain and brawn-he instills confidence in her ability to function without legs. She then creates an opportunity to make money by entering him in shady bare-knuckle fights. The theme of rehabilitation is affirmed by the film’s title: while rust can be scraped and cleaned away, broken bones in the hand never completely heal.

Un Prophete, Jacques Audiard’s previous film was shot on 35mm, yet for this film he made the switch to the 5K Red Epic MX. The realist aesthetic of Un Prophete, cultivated through hand-held camera work and high speed film, carries over to Rust and Bone and is even enhanced by the use of digital cinema. By taking advantage of the limited exposure latitude of the cinematography, the grainy-documentary style of film previously seen in Un Prophete is executed in a vastly more masterful manner.

On a normal day in the middle of nowhere, a tire named Robert came to life. With an endearing child-like demeanor and armed with telekinesis Robert ventures out to find a world that actively seeks to reject him. From the small-town police officers and motel employees, to the Greek Chorus of spectators with binoculars, all characters engage in and perpetuate the film’s main theme of “no reason”.

Rubber was shot on the very inexpensive Canon EOS 5D Mkii, a DSLR with full-frame sensor. A full-frame camera has the benefit of being the same size as a 35mm negative, which allows for a more natural shallow depth of field resembling that of film.

A film shot on this camera indicates that the technology has proceeded to such an extent that anyone can afford a professional quality camera and manage to make a successful film with it. This fusion of quality and affordability combined with social media has pushed the cinematic medium into the hands of the people and what comes back are intriguing and engaging films (however bizarre).