In his epic 252-minute film “L’Amour Fou”, Jacques Rivette follows the dissolution of a married couple, and the destructive way they try to stay together. As they destroy their own building, Rivette’s film shows what the concept of amour fou is about: loving too much.

Obsessive love that leads to destruction is the main theme of the films on the list, but it is also a list of films full of tenderness and pure love. This ambivalence of love keeps torturing filmmakers and brings us to one of the most basic and religious themes of film: the possibility of love.

Sexual explorations, misfits, social struggles and feeling “different”, among other topics, keep repeating on this list. With these 20 films, we can learn how to understand the least understandable of feelings.

Love triangles can lead to tragedy, and the doomed destiny of Jules (Oskar Werner) and Jim (Henri Serre) is one of the most beautiful ever filmed. The free spirit of the nouvelle vague montage makes the love of both toward Catherine (Jeanne Moreau) look natural and real, and we believe the way this double love works.

As with many films on this list, the love interest represents a completely different set of values compared to its social landscape. Catherine is a free-spirited girl who makes both Jules and Jim get out of their comfortable bourgeois lifestyle. François Truffaut seals their destiny in a love triangle full of the elements that made the movement famous, and it remains a document for its time. But above all, it shows a beautiful and strong love story.

Any romance in a Jean-Luc Godard film could be easily described as crazy. Since “Breathless” (1960), his couples seem to be together by pure chance, and it is hard to tell why they’re together. With Godard, love is a way to get through philosophy and art, and to find a partner along the way.

The biggest example of this is the love between Anna Karina and Jean-Paul Belmondo and their destructive road travel. Both escaping and in danger, they find each other and unleash an eccentric love based on avoiding the law and jumping from one random situation to another.

The free-spirited Godard finds his purest form in this romantic road movie. How normal or justified love is doesn’t appear to be important in this film, but instead we are led by a simple but powerful fact: they are being chased, and they are together in their escape.

Many films on this list are mainly about two outcasts finding each other. They are about people rejected among their peers, and people who can’t find their place in society. The case of Harold (Bud Cort) fits this profile; he’s a rich kid who doesn’t get along with his mother and has a weird obsession with the dead. The beautiful companion that Hal Ashby puts in front of Harold is a different kind of misfit, who can understand death in a different way.

Maude (Ruth Gordon) is a sweet and eccentric old lady who shows that she can bring wisdom and excitement into Harold’s life. This surreal hippie tale of love, scored by the beautiful music of Cat Stevens, shows us how an old rebel can find interest in an intriguing but far younger man. Maude shows how we can all forget about age barriers, and appreciate pure love.

This scandalous film remains one of the strongest examples of passionate love. The man and woman in love in “Last Tango in Paris” don’t even know each other’s names, and as Paul (Marlon Brando) demands, they can’t know anything about their respective pasts. It is only meant to be a casual encounter between two nameless persons, meeting to have sex and unleash desire.

Maria Schneider was never able to move past the fame this film gave her; Bernardo Bertolucci played with his actors in the same way that Brando’s character does with Schneider’s character. With perfect cinematography from Vittorio Storaro and the smooth settling music from Gato Barbieri, we get to see how this relationship starts to fall down as their exterior demands crumble inside their apartment.

Brando looks like a sadistic torturer, but then we discover what a broken man he is. With a somehow morally arguable ending, “Last Tango in Paris” showed passionate love to audiences in the 1970s, as it was one of the first films with such a direct focus on sex. 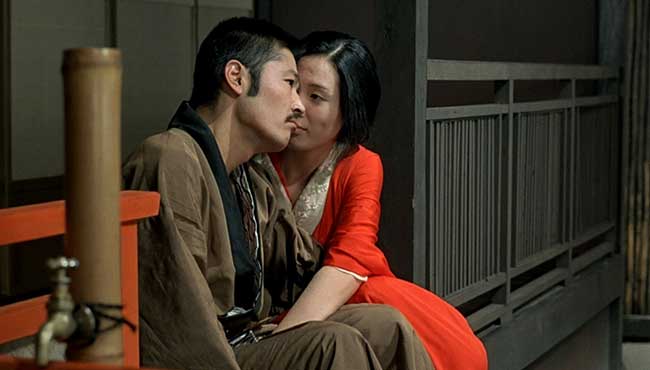 Many tales of obsessive love, the kind of love capable of destroying the couple in question, are centered on sex. The boundaries of pleasure within sexual relationships is constricted all around the world, and one the countries with major issues about it is Japan. So naturally, someone like Nagisa Oshima had to push the boundaries of the taboo beyond what Japanese audiences could bear to see.

“In the Realm of the Senses” hasn’t been shown in its entirety in Japan, so it’s clear just how provocative it is. And in this case of passionate love, sex is what leads them to voluntary destruction.

Based on the true criminal story of Sada Abe, the film shows how the affair between a former prostitute and her new lord evolves into a series of sexual experiments. Sada and Kichizo create and find new ways to stimulate their sexual desires, and when they start to increase this desire they find out how hurting each other can work as a sexual stimulator.

With beautiful shots and cinematography, we see a couple giving up their mental and physical health to pleasure, and at the same time they elevate a radical answer against their constrictive imperial society. 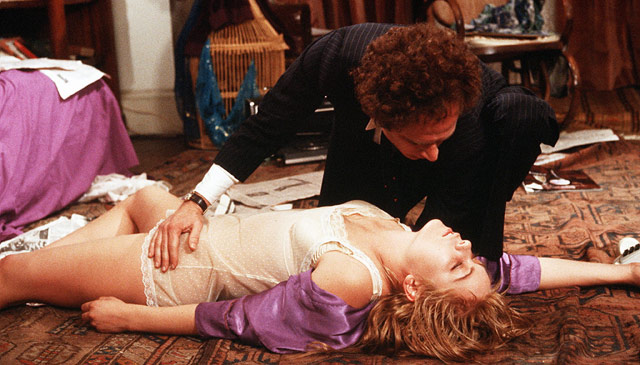 In one of his classical games of montage, Nicolas Roeg shows us a mix of chronologies and events leading to a suicide attempt by Milena (Theresa Russell). We also have Alex (Art Garfunkel) in the waiting room eluding different questions from the police. Roeg makes an incredible work, fragmenting every bit of the story and enabling us to rush to conclusions.

What we do know as the movie goes forward is that Alex is not a friend of her like he tells the police, but rather a lover. Alex is also a psychoanalysis teacher who can’t give a proper reason for his sudden passion; Milena represents the lack of thrill in Alex’s life. While everything in his classes seems pale and tasteless, his sexual moments and encounters with Milena seem to fulfill his need for excitement.

Like in many films on the list, an Amour fou is mainly a way to feel excitement again. In these love stories, the rules of a normal constricted love can look boring, and it certainly looks that way in the boring meetings Alex has in other places. All these speeches and art galleries seem like a shallow activity for Alex, so finding again this primitive sense of love drives him mad.