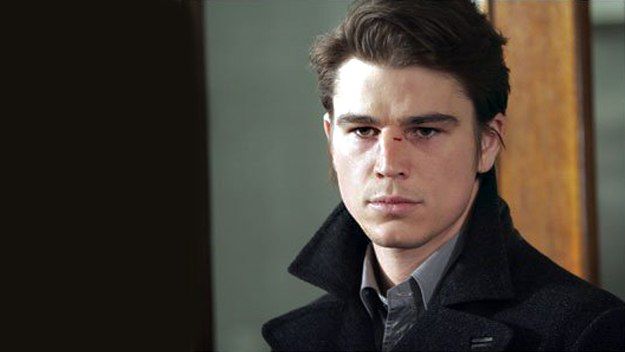 With the release of Reservoir Dogs in 1992, Quentin Tarantino seemingly arrived out of nowhere and immediately established himself as an up and coming talent on the rise. Utilizing a flashback-laden narrative, Tarantino’s film about the fallout of a heist gone wrong was a rather startling injection of adrenaline into the crime film genre. Little did anybody know that his inauspicious independent debut would be the lead off to a highly influential, critically lauded career.

The follow up to Reservoir Dogs came a mere two years later with the release of Pulp Fiction. Due to the success of Reservoir Dogs Tarantino had become a recognizable name and his sophomore effort was one of the most hotly anticipated films of 1994 after winning the prestigious Palm D’Or award at the Cannes Film Festival.

From that moment onward, the anticipation began to build. When the film arrived at theatres in October of 1994, its impact on audiences and Hollywood was immediate. Pulp Fiction was a grand slam for the director and its parent studio, Miramax, winning praise from all corners of the critical world and winning over audiences with authority. Tarantino had officially arrived.

In the aftermath of Pulp Fiction’s success, every studio, big or small, was now searching for the “next” Pulp Fiction. There would be many knock-offs, wannabes and third-rate imitators that would attempt to emulate the “Tarantino style” for years afterwards. Any story containing colorful gangsters, hit men, a kitschy soundtrack, flashy violence, darkly macabre humor, criminal underworlds and snappy, pop culture laden dialogue was now what every studio wanted.

The remainder of the 1990’s (and well in to the next decade, actually) would see many, many films inspired by Quentin Tarantino and Pulp Fiction, all bound in unity by sharing immediately recognizable traits that were transparently obvious in their inspiration. While not all of them were completely terrible, for every decent effort there were numerous lousy ones that leaked out of Hollywood and onto the big screen, or in some instances, directly to video store shelves.

The list below represents the worst of the Tarantino copycats and wannabe’s of the post-Pulp Fiction, post-Tarantino era that emerged from the period encompassing 1995 – 2005. 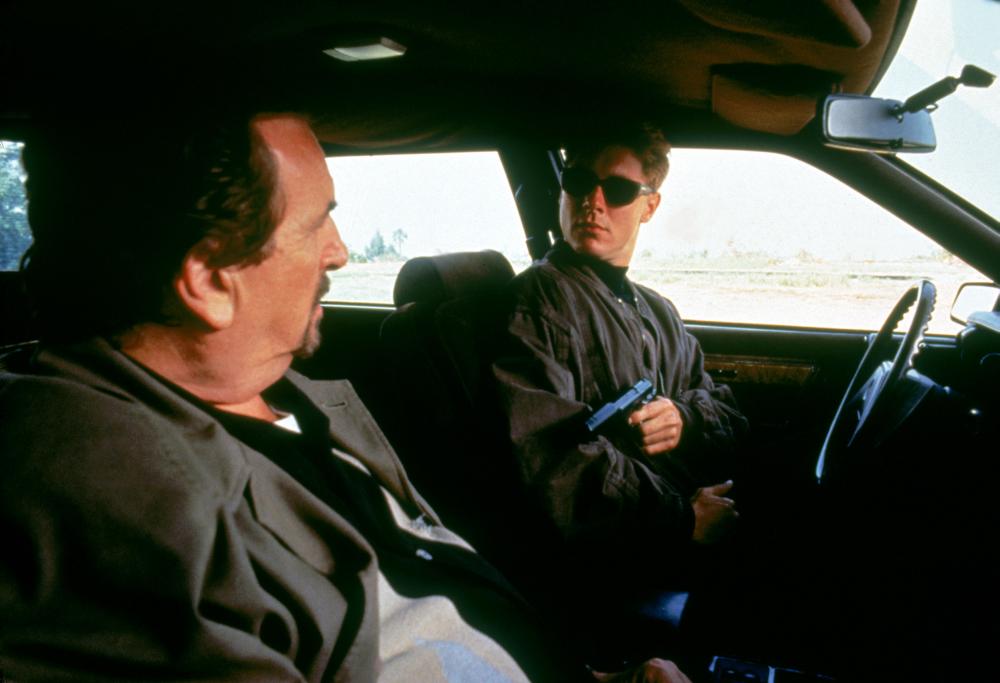 This 1996 crime based comedy wears its inspiration right on its sleeve, in plain view, and does not attempt to conceal its obvious Tarantino aspirations (with a nod towards Robert Altman also). Furiously knitting together multiple narrative threads involving (surprise!) mob assassins, vice cops, a jilted woman and her philandering partner, an art dealer and a washed up ex-actor, the characters are all “quirky” in the most contrived ways imaginable instead of being more suitably developed.

While some of the dialogue and performances are funny at times, the attempts at black humor are mismanaged and the plot goes into coincidental overdrive by straining to have every character in the film eventually cross paths or wind up somehow related by the time the end credits come up.

One of the most blatant Tarantino wannabe’s of the mid to late 90’s, 2 Days In The Valley tries very hard to come across as hip, tossing around in-jokes about Los Angeles, and utilizing the requisite poetically sophisticated gangster dialogue in generous amounts, but the end result is a contrived pastiche of ideas that never really solidifies into anything original enough to set itself apart from the movies it wants to be like.

At the time of its release there was a lot of buzz and expectation surrounding the film but it ultimately failed to live up to the hype; it reaches for Tarantino-ness and falls short, wasting the combined talents of its cast in the process.

This film boasts a somewhat interesting MacGuffin device – three coins minted during the Ming Dynasty era – but that’s really all it has going for it. The ensemble cast here (Jeff Goldblum, Tom Wilkinson, Salma Hayek, Steve Zahn, Elijah Wood) is actually interesting and well composed, it’s just that, like many of the other characters within the films on this list, none of them are given anything too interesting to do or say.

Once again, the emphasis seems to be on making the characters as quirky as possible instead of having them support a compelling story. The usual tiresome archetypes for this type of film are on full display here; the everyman drawn into the criminal underworld, the psychotic criminal, the cheating spouse, the resourceful detective, etc (although Elijah Wood’s aspiring teenaged hit man is modestly enjoyable).

First time directing duo Pontus Löwenhielm and Patrick von Krusenstjerna (billed together simply as “Tractor”) decided to forgo the expected pop culture laced dialogue and instead borrow the fractured narrative trope from Pulp Fiction, leaping forward and back in time and informing various scenes in the present with seemingly random plot lines that eventually coalesce to fill in various character motivations.

While this isn’t in and of itself a terrible idea, it also isn’t executed satisfactorily as the pace plods along rather slowly and the movie never really picks up any speed, failing to find a rhythm that draws in the viewer. Perhaps this movies worst crime is that it simply isn’t very engaging overall, and that’s a shame as the cast deserves much better than the sluggish proceedings here. Consider this one Tarantino-lite. 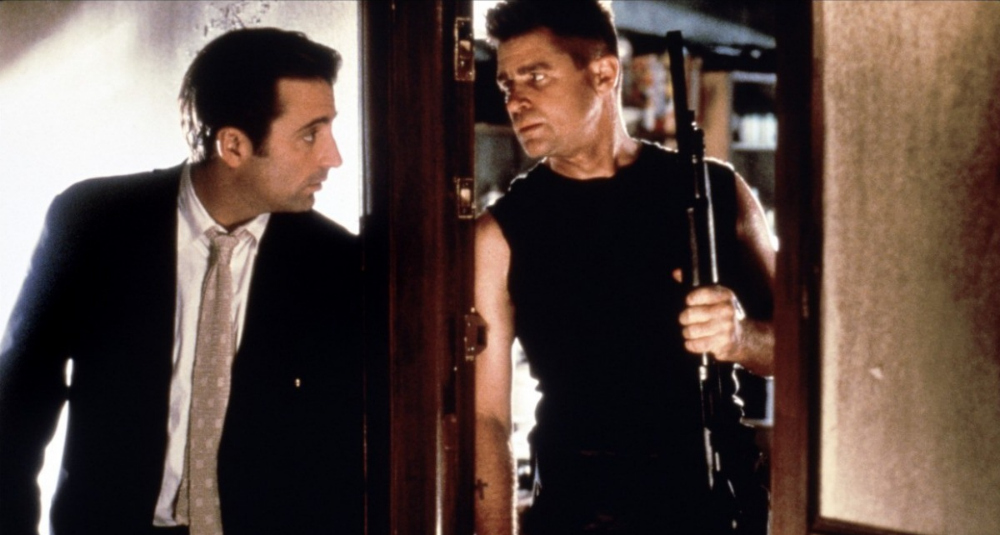 Style over substance is a common trait of many Tarantino knock-offs. It’s as if every studio exec who green-lit any of these films had no actual clue as to why Pulp Fiction was so successful; instead of starting with a good script as a solid foundation and building outwards, there is instead an over emphasis on the perceived “cool” stuff – the idiosyncratic criminals and villains, the bursts of graphic violence, the unnatural yet brazen dialogue, the femme fatales, the incongruous use of pop songs, etc. – and shovel huge amounts of it all over the place to disguise the deficiencies of the story. This movie is a textbook example of this exact line of thinking.

Instead of utilizing the fractured narrative approach, the movie instead plays as a straight drama, straining for poignancy in its third act as Andy Garcia and his crew are summarily hunted and killed at the behest of Christopher Walken’s mob boss after a simple job he’s assigned them goes completely awry and results in unintended murder.

While the ensemble cast is certainly game and some of the performances are fun to watch (notably, Treat Williams as Critical Bill, who manages to have a lot of fun while uttering lines such as, “Your reputation far exceeds your skills, mammy rammer!”), there isn’t much of interest here as the largely terrible dialogue (example: “girls that glide need guys who make them thump” – yikes!) simply falls flat, sabotaging some otherwise decent performances.

Steve Buscemi and Christopher Walken, lending an air of perceived credibility to the proceedings due to their prior association with Tarantino, still aren’t enough to inject some energy into this ultimately overwrought knockoff.

Things To Do In Denver When You’re Dead was granted a limited, holiday season release date in the hopes of garnering some Oscar attention for some of the performances within. An admittedly catchy title and some inspired casting wouldn’t be nearly enough to endear this film to a mass audience, and as such, it went largely ignored and died shortly after its release at the end of 1995. 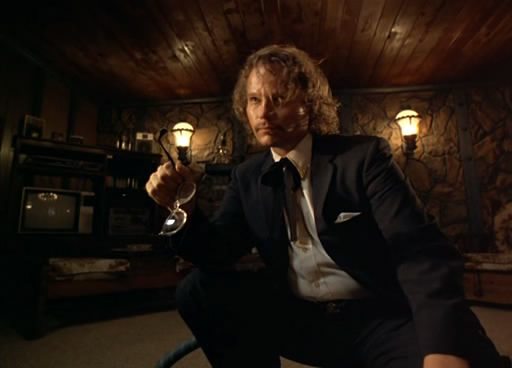 This film aims for Tarantino-esque style by threading together multiple plots, seemingly random when the viewer is initially introduced to each. The characters are straight out of the Tarantino handbook, right down to the meaningless, but pseudo-hip dialogue they all spout, even getting down on some discourse about the rock band Aerosmith, and the merits of the band’s past output versus their modern day albums.

To be fair, some of the characters seem to be inspired by David Lynch as well, but again, they’re all pale facsimiles at best. This film does boast an interesting ensemble cast of character actors (John Savage, Brion James, Melora Walters, James Russo), but for the most part none of them, except perhaps for Savage, really display anything resembling a personality, unless of course iconoclastic criminals spouting would-be poeticisms is to be taken as characterization.

Perhaps this movie’s biggest flaw, more so than the half-baked characterization and banal dialogue, is that this whole production really feels incomplete, as if the producers exhausted their funding before a coherent edit and final cut could be finished.

Some of the various plotlines come across more like short vignettes rather than essential pieces of a larger whole and this odd disjointedness just makes the entire film feel like more of an experiment than an actual film. Perhaps the intention was to come across as artsy, but the end result is an uninspired, half finished snooze fest.

Thursday is really just a third rate Tarantino styled knock off at best. As with other films on this list, the cast here (Thomas Jane, Aaron Eckhart, Mickey Rourke, James Le Gros) isn’t terrible; it’s the script that fails the actors. The majority of the film takes place in a single location (likely due to a shoe string budget) as it helps to keep the focus on no more than two or three characters at any given time. The issue is that those characters are not interesting enough to warrant that attention.

Thomas Jane is the lead here, playing an ex-criminal who has discovered that an old acquaintance has left a suitcase of heroin in his house. After dumping the drugs down the toilet he is visited by a succession of characters, and almost all of them are looking for the drugs.

Among the many visitors to his home throughout the day are a wannabe rap star, a psychotic ex-girlfriend, a hit man with a penchant for torture, some corrupt cops, an adoption agency rep and more, all spouting the usual hip/quirky/odd/cool/tough guy dialogue and exuding the requisite character traits that any imitation Tarantino film characters absolutely must have.

While the basic idea of the plot isn’t original in the slightest, there was an opportunity here to create some real tension based around the escalation of the events that continue to befall the main character as his day wears on.

But unfortunately nothing ever really materializes to establish or sustain any kind of dread or unease, the plot merely enables everybody who visits Jane to wildly overact as things continue to get increasingly ridiculous. Instead of feeling relieved when the protagonist finally finds his way out of his predicament, you’re more likely to feel relieved that this tedious mess is finally over.