The horror genre doesn’t always get the appreciation it deserves. Horror is often degraded and seen as lowbrow cinema that’s highly formulaic schlock with an over-reliance on sex, violence and cheap jump scares.

It’s hard to make an original film these days, and no genre knows this better than horror. However, many horror films eschew the conventions of genre in ways that are fresh or original. Here, we’ll look at ten of those films.

Based on the short story by Daphne du Maurier, “Don’t Look Now” focuses on a couple (Julie Christie and Donald Sutherland) who are staying in Venice after the recent death of their young daughter. They encounter a (supposed) psychic who claims that their daughter is attempting to contact them and warn them of a coming danger. The husband is skeptical of these claims, but starts to experience strange sightings and circumstances that may prove the existence of the paranormal.

On the surface, “Don’t Look Now” sounds like a typical ghost story, however what sets it apart from many other films of its ilk is its study of the psychology of grief. Director Nicolas Roeg was intrigued by the idea of the effect of grief on the human mind and worked it into the script.

The film uses many recurring images that recall the opening scene, in which the couple’s daughter drowns in a pond. The film frequently uses the color red, the color of the coat the little girl was wearing at the time of her death. Another recurring motif is water which is used throughout the movie as dead bodies are fished out of Venice waters in a subplot about a serial killer. The film relies heavily on atmosphere rather than jump scares, and the streets of Venice provide an eerie and foreboding mood.

“Don’t Look Now” is a tightly edited horror classic that gets the best out of Julie Christie and Donald Sutherland while also being a frightening and sometimes tragic portrait of a grieving family. Essential viewing. 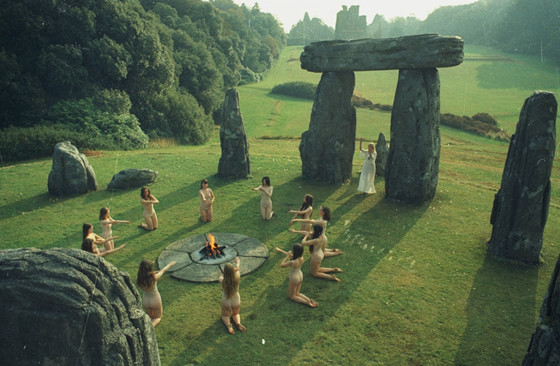 Often called “the Citizen Kane of horror movies”, “The Wicker Man” is about sergeant Howie (Edward Woodward) visiting Summerisle, a Scottish island in search of a missing girl. However, to Howie’s chagrin, the Pagan locals, led by Lord Summerisle (Christopher Lee), claim that the girl never existed. As the film progresses, Howie learns more about the community’s eccentric and disturbing practices, which all culminates in one of cinema’s most shocking endings ever.

“The Wicker Man” is very unique in its genre. Up until its climax, it plays more like a psychological mystery with occasional horror, while also incorporating elements of comedy, thriller, drama and even musical. Its shifting tone gives it a disorienting and surreal atmosphere.

“The Wicker Man” has gained recognition as a cult classic over the years and has been the subject of much acclaim, some even calling the greatest horror film ever made. Its highlights are its subtly frightening atmosphere, fantastic performance from Christopher Lee and, of course, one of the greatest endings of all time.

Shot on a budget of $7 million, Eraserhead was the debut film of the now-legendary filmmaker David Lynch. It tells the story of Henry Spencer (Lynch regular Jack Nance), who is left to take care of his newly-born mutant child (“it might not even be a baby”, we are told in one scene) after his girlfriend (Charlotte Stewart) leaves him while struggling to survive in his industrial (possibly post-apocalyptic) city.

“Eraserhead” uses this industrial atmosphere to create a surreal feeling of unease that hasn’t been matched by any film since, which is accompanied by a creepy score that gives the movie a disorienting effect. Another highlight is its disturbing practical effects, particularly that of Henry’s mutant child, with a technique that David Lynch is notoriously secretive about.

Little seen upon its release and trashed by those who did, “Eraserhead” was quickly forgotten until it had a successful run on the midnight movie circuit and received praise from filmmakers such as Mel Brooks and Stanley Kubrick (who famously called it his favorite film).

In recent years, the film’s themes have been the subject of much analysis. Is it about the fear of parenthood? A warning of the dangers of industrialization? Does it have a meaning at all? Nobody can seem to agree. But what everybody can seem to agree on is that it’s a masterpiece of surrealism and one of the best in the horror genre.

“Videodrome” tells the story of Max (James Woods), the head of a Canadian television station that specializes in pornography and graphic violence. He stumbles across a new program called “Videodrome”- a plotless show consisting entirely of torture and extreme violence. After uncovering the program’s source, Max begins to lose touch with reality as he has a series of violent and increasingly bizarre hallucinations.

Cronenberg’s film is a commentary on our obsession with television and the unethical practices of many television producers. The film doesn’t shy away from graphic imagery, with many scenes contain graphic violence, nauseating practical effects and abhorrent sexuality, but it rarely feels exploitative and fits perfectly with the tone of the film.

“Videodrome” is a terrifying film with fantastic practical effects and social commentary that remains just as relevant today as it was in 1983.

Universally regarded as one of the most disturbing movies ever made and withheld from release for four years, for that reason, “Henry: Portrait of a Serial Killer” delivers exactly what the title promises: a portrait of a serial killer.

Michael Rooker stars as Henry, a serial killer who operates without remorse often aided by the even more unstable Otis (Tom Towles). The film neither glorifies or denounces these characters; we only observe their actions and are left to draw our own conclusions.

“Henry” is a true horror film. There are no monsters or jump scares, but “Henry” is one of the scariest movies ever made. What makes it so scary is its plausibility. “Henry” is completely grounded in realism, nothing is polished or exaggerated, people like Henry and Otis exist and they may be somebody you know. The film takes the audience out of their comfort zone and asks us: Are we, as a society, any different from Henry and Otis for enjoying violence manufactured for entertainment?

The film has a few darkly humorous scenes, which are always immediately followed by a graphic scene intended to confront the viewer with their desire for violence. In a scene intended to mirror the audience, Henry and Otis calmly watch a videotape of one of their murders, even pausing to rewind.

“Henry: Portrait of a Serial Killer” is a difficult film to recommend. It’s a very well-made film with fantastic performances from the two leads, but its graphic scenes and disturbing subject matter make it a difficult watch. Perhaps, “Henry” is a film that should be seen once….and only once.