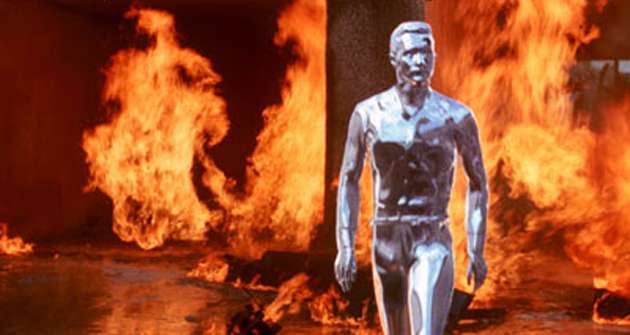 VFX stands for every visual effect which is rendered in post-production, meaning that a series of images is created separately from what is shot on set or on location; a great part of VFX is CGI, literally “computer-generated imagery”. The first meaningful creations in this sense where made in the 1970’s when computer technology was developed enough to create a believable effect.

1980’s blockbusters like Tron or Star Wars opened a new world for filmmaking: entire worlds could now be created and showed in all their particulars. A pioneer of VFX and CGI is certainly James Cameron, who brought this technology to new heights with his films The Abyss and Terminator 2.

The last three decades saw an increasing use of CGI, which has proven to be useful for ambitious action films in which the creation of digital locations and characters is often needed, as well for smaller films which equally benefit from the advantage of creating something that cannot always be shot in real life.

The highest peak of CGI technology was reached with animated films, starting with Pixar’s Toy Story. These films are completely computer-generated, and the level of detail and inventiveness which they achieve can be considered as the greatest visual innovation of the last decades: if filmmaking can be considered as the opening of new worlds to the viewer, it is clear that every single animated film literally does that from scratch.

Apart from CGI, many of the visual effects of recent years are rendered through the technology of green screen and motion capture.

Shooting in film stock is the analogue method by which cinema was born and for almost a century it remained the main method for making movies. Now, digital technology has taken control of the international film production system and is now largely the main technology used for not only shooting films, but also projecting them.

Digital cameras record image through pixels instead of exposing film stock which then has to be developed and ultimately projected; 35mm film was the standard for filmmakers during most of cinema’s history. The advantages of digital shooting weren’t immediately accepted by the industry, but when companies started creating easier to handle cameras, while at the same time filmmaking shifted towards a larger use of computer technology, “digital” became the preferred choice.

The first film completely shot with digital technology was “Star Wars EP. II – Attack of the Clones”. George Lucas’ project gathered mixed reactions, but the advantage of not having to physically load the cameras with film proved too good for the industry which saw in digital filmmaking the chance to drastically reduce costs. Still, many directors have refused the shift to digital, claiming that the grain and feel of film is where cinema’s true nature is really found.

Linear editing refers to the action of editing a film by operating sequentially on the original source of the images, be it film or tape. This was the only process of editing known in the industry until the digital revolution made it possible for the source material to be transferred on a computer system.

This meant that editors could instantly access every part of the material and then work on it; the “linearity” wasn’t an obligatory aspect of editing anymore. Non-linear editing is now virtually the only employed method for editing and has made this task extremely handier.

A possible downside of the technique is the conversion of the source images, since the acquisition by the computer often requires lossy compression, which makes the material less heavy but can affect the quality. Still, quality is becoming less and less a concern for non-linear editing due to the higher quality of the technology and also for the use of lossless compression (which doesn’t effect the quality of the files by generating identical copies of them).

Non-linear editing has also increased the number of transitions and effects that the director can give to the various scenes, since many of these effects are difficult or impossible to achieve with linear editing.

Since the release of Avatar in 2009, 3D technology has become a persistent element of wide-released films, but it has also been employed in films with lower budgets, for a less spectacular and more artistic approach. 3D had already become known in the 1950’s when the first films with stereoscopic imaging were released (for example, Dial M for Murder by Alfred Hitchcock).

During the next decade 3D became a sort of novelty attraction used for some film releases like Jaws 3-D, and was alternatively also used for certain documentary events. The stereoscopic technology had its rebirth in the late 2000’s and spawned a new tradition of 3D releases. It’s important to differentiate, though, between the films shot with 3D technology and the ones shot in regular 2D and then converted in 3D.

The main difference is that for the latter group of movies the transition can result as forced, while films shot intentionally for 3D naturally give more attention to the visual requirements the technology needs. Animated films in particular often give great attention to the final effect that 3D will give.

To this day, even after the enormous success of 3D projects like Avatar, this technology still struggles to gain credibility as more than just a visual enhancement, and there are still many complaints about its downsides like the uncomfortable glasses, the darker image, and the often unconvincing visual effect it gives.

IMAX stands for Image Maximum and was developed by the Canadian IMAX Corporation. It is a film format which highly increases the resolution of the image. Over the past years IMAX screens have considerably grown in number, and as of 2016 there are 1061 IMAX theatres spread over 67 countries.

Just like 3D, IMAX is presented an alternative viewing experience and its rendition of highly defined images is usually used as a promotion for big budget spectacular films; another thing IMAX has in common with 3D is the possibility to convert a film in that format even if it was shot in a normal method. This means there is a distinction to be made between IMAX-converted films and films shot directly on that format.

Shooting in IMAX has proven to be tricky, since the cameras are heavier than normal ones, and the kind of film stock that goes through an IMAX camera is much larger than the usual 35mm (more precisely, it is 65mm which passes horizontally instead of vertically, 15 perforations at a time); all of this results in an higher image.

For many years IMAX was used mainly for heightening the details of documentaries, but since the end of the 2000’s, mainly due to Christopher Nolan and his use of the technology for the Dark Knight Trilogy, IMAX has spread into commercial cinema. The format is still developing to this day, but he use of IMAX has always been limited to a restricted number of sequences of movies. Still, it is not difficult to imagine that sooner or later a film will be entirely shot in IMAX.