Wong once said, “Fashion is not something that exists in dresses only, fashion is in the sky, in the street, fashion has to do with ideas, the way we live, it’s what’s happening.” In that sentence, he quoted both an ancient Chinese proverb as well as Coco Chanel, and established the importance this element holds in his films.

In “Ashes of Time”, Wong, along with his usual collaborator, William Chang Suk Ping, used highly stylized costumes to attract the audience’s attention to their graphic qualities while signifying each individual’s image. For example, Ouyang Feng’s sister-in-law always wears a long red dress, with the particular piece of cloth establishing her character’s presence.

However, his prowess in this field is chiefly presented in “In The Mood For Love”, where Maggie Cheung wears more than 20 magnificent Mandarin dresses, looking gorgeous in all of them. As Su changes dresses every time she appears on screen, Wong uses this tactic not to exemplify her sense of fashion, but to represent the changing of her moods. In that way, he incorporated the costumes in the actual narrative.

For example, the neighbors comment on her dressing up by asking among them: why is she dressed like that to go for groceries? This scene shows their view of her through her dresses.

Furthermore, and in a wonderful technique that stresses Wong’s attention to detail, there is an evident correlation between the costumes and the surroundings. For example, in a scene at the beginning of the film, she wears a floral dress that perfectly matches the curtains.

The usual tendency in cinema is for the filmmakers to use “high-key” lighting to create low contrast between brighter and darker areas. However, Wong uses an alternative technique called “low-key illumination” that creates stronger contrast and sharper, darker shadows. In “Ashes of Time”, this tactic becomes obvious in the depiction of Murong Yin/Yang standing in the desert, with the image being filled with extreme dark and light sections.

This technique is also used as symbolism. For example, in “In The Mood For Love”, low-key lighting is used to exemplify the emptiness in Chow’s life, as in the scene where he walks up a dimly-lit staircase.

In terms of aesthetics, low-key lighting is used to create a genuine film noir atmosphere, as is the case with “Fallen Angels” where the technique permeates the film.

8. Depth of field and perspective 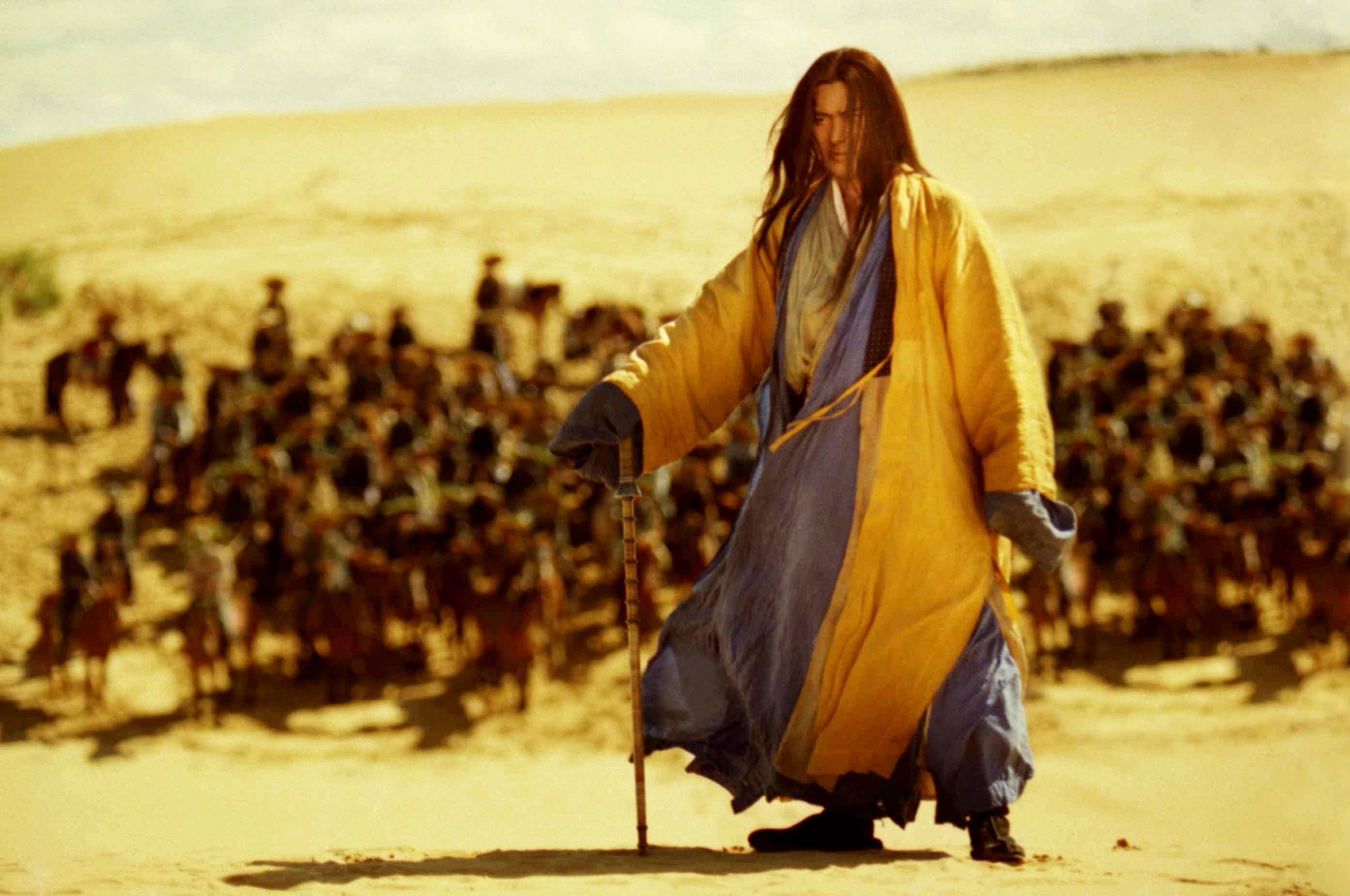 Another aspect of cinema in which Wong has distanced himself from the traditional methods, is the depth of field produced by different types of lenses. The usual tactic for cinematographers is to use middle-focal-length lenses in order to portray the space in each scene in a “logical way.” Wong and Doyle, however, use wide-angle and long-focal-length lenses more often, in order to alter the space witnessed in the various scenes.

For example, in “Ashes of Time”, Wong uses this technique in the scene where Huang Yaoshi is riding through the desert, and the background of trees and the foreground of desert look like they exist in the same place.

Furthermore, through the extensive use of wide-angle-length lenses, he exaggerates the depth of field and distorts space. Again in the same film, this tactic becomes evident in the scene where a village girl is approaching Ouyang Feng, looking much larger than him, despite the fact that she is closer to the camera.

His unusual tendencies in this aspect are also witnessed in “In The Mood For Love” where Wong gives strong attention to walls, to the point where they frequently obstruct the depth of field.

9. Silence and the absence of dialogue

In contrast to Western cinema tactics that are based on dialogue, Wong makes excellent use of silence in his films. His characters are frequently trapped in their thoughts and memories, isolated from each other and from the rest of the world. Their state of mind is communicated through their actions, body language, looks and sometimes through narration. What is left unsaid is always more important than what isn’t.

A distinct sample of this technique takes place in “In The Mood For Love”, when Su and Chow pass each other on a staircase and are forced to take shelter from the rain. The camera focuses on their glances that are filled with thoughtfulness and on the wry smile of Tony Leung, to eloquently but without dialogue, portray the sense of loss and longing that permeate the two characters.

In the same film, another example of this tactic occurs in the end, when Chow pours all his frustration and anguish over his relationship with Su into a hole in an ancient temple.

However, the film that most exemplifies this trait is “Fallen Angels”, where Takeshi Kaneshiro elaborately portrays the mute He Zhiwu. In this film, He Zhiwu’s thoughts are communicated through internal dialogue, and through eloquent body language. His silence acts as a metaphor for the lack of communication and the subsequent loneliness that people feel in urban environments.

The vast majority of Wong’s characters are lonely entities living in their own world, and their solitude is so vast that it can neither be understood or satisfied. Their other feelings are repressed by this sense of loneliness, to the point that emotional tensions are created, which usually result in the characters not being able to commit or, in some cases, ending up abandoned when they least expect it.

In “Days of Being Wild”, Yuddy seduces two different women. However, as his cruelty and his playboy nature become evident, both he and the women embark on different emotional journeys. In “In The Mood For Love”, the sentiment of loneliness is even more stressed through the sense of longing Chow and Su feel, but never seems to materialize.

In “Fallen Angels” and “Chungking Express”, the loneliness derives from the modern urban society. The characters, despite Hong Kong’s high-density population, cannot connect to anyone and end up alone, at least sentimentally.

Wong even uses sound to present the loneliness of his characters, as in “Ashes of Time” where each character has his own music that reflects his unique idiosyncrasy, but also his solitude.