Cinema has been interested in the outer reaches of space ever since the beginning of the medium. George Melies’s Un voyage dans la lune/A trip to the Moon (1902) is probably the first film that tackled the theme of space exploration, and, ironically, humanity is still not able to get pass the Moon. In cinema, however, astronauts have discovered strange planets, encountered dangerous aliens and gazed upon the wonders of space.

Nowadays, space exploration is a common theme in science-fiction movies, probably because technology will soon allow us to actually see Mars. For now, we can only see the red planet through the eyes of high-tech gadgets or through the fictitious depictions of filmmakers. These artistic visions make it possible for the public to meditate upon the human nature, our place in the Universe or simply place their audience inside a space ship.

The cinematic world presented in this list explores the themes and emotions mentioned above, but it also shows the variety of ways in which space has been explored in movies.

Like many satires, Carpenter’s feature debut is hilarious while discussing plenty of serious matters. The film follows a ship, deep into space, whose crew has the mission to destroy planets that are unsuitable for human life. The four astronauts are lonely, bored and plagued by their captain’s death. After the ship encounters an asteroid storm, a malfunction causes a bomb to arm for the destruction of a new planet.

The film satirizes many aspects of space travel and science fiction. Firstly, it pokes fun at the numerous and usually wild alien depictions in SF films, as the alien on their ship is just a beach ball with legs, that will cause a lot of trouble. Secondly, Dark Star is a self-aware film. It knows it is a low budget movie and it uses this to caricature the sounds and the scientific talk of astronauts in films.

Lastly and more importantly, the film plays with the arrogance of human beings that believe even the Universe belongs to them and can destroy planets with the push of a button. For now, humans are unable to explore the deep space, but the dark undertone of this aspect is that, in the future, they may very well take the Universe for granted.

The final scene of the movie is a key one, because, not only does it satirize 2001: A Space Odyssey in a very clever way, but it also is a deep meditation upon human existence. In this scene, one of the astronauts is talking with the bomb, after numerous occasions in which it was sent back to the bomb bay.

This time, the bomb is determined to blow and Lt. Doolittle (Brian Narelle) is trying to convince it to disarm with a series of philosophic questions. This moment is both hilarious and captivating and concludes a truly unique science fiction satire.

This realist SF film is one of the most thought-provoking films in recent years and it just begs to be talked about. Some people criticized it for not being as scientific accurate as it wants to be, while others say it’s complexity is just pretentious. While it’s true that the film was expected to have very little scientific inaccuracies, it is a piece of fiction and it plays perfectly with the speculation and sense of wonder that makes science fiction such a great genre.

In a desolate future, where people live on agriculture, a pilot will find NASA’s secret base and join their team of astronauts, on a mission to find a new planet for the continuation of the human race. The power of the film is that it does so much with very little.

The special effects are kept to a minimum, while the sense of space is given by claustrophobic images of the ship, and great shots of planets, stars and sheer darkness. This simple style of filmmaking, along with the scientific research gives the film a realist feeling, a tendency which SF movies have, because, in science, the barrier between reality and fiction is starting to disappear.

A scene in which the fictional aspect prevails is when Cooper (Matthew McConaughey), the protagonist, fall into the black hole. Right before entering a five-dimensional tesseract, his ship is surrounded by darkness. This is the key shot of the film because it shows that, daring as it may be, space travel will always be marked by the anxiety of delving into the unknown.

Nolan’s film is a sublime meditation on the future of humanity and its engulfing images and themes will continue to be talked about for the years to come.

Another realist film, this time in true found-footage fashion, Cordero’s film is both fascinating and eerie. It tells the story of a fictional crew of astronauts that has the mission to search for alien life forms on one of the moons of Jupiter, Europa. It is shot like a found footage- documentary hybrid, being assembled from television news, interviews and images filmed by the cameras on the ship.

The raw feeling of being on the space ship overwhelms the audience and breaks he barrier of what is real and what is fictional. A particularly shocking scene is when Corrigan (Sharlto Copley) can’t enter the ship anymore, after some complications. He starts drifting in space, but is still talking to the other crew members to calm down. The fact that the scene is shot from his point of view, amplifies the feeling of fear and isolation.

A very important aspect of the crew is that is multicultural. Actors like Michael Nyqvist, from Sweden and Anamaria Marinca, from Romania are used by the director to tell the audience that the issue of alien life forms is of worldwide importance.

The environment on Europa is depicted with the same realism as the whole movie. It`s shot beautifully and, in some moments, it retains the atmosphere of the scene in Aliens in which they watch the soldiers through monitors. In this movie, the astronauts gaze upon the findings of their colleges that risk their lives in favor of science.

With its startling rawness and amazing imagery, Cordero’s found footage experiment is a tribute to human curiosity and ambition that is sure to make an impression on the viewer.

Ridley Scott’s sci-fi thriller is one of the bleakest films set in deep space. His masterful direction and the innovative special effects give the movie a truly grim atmosphere. It may not be the first SF film to blend the genre with elements of horror, but just the scenes in which the Alien (Bolaji Badejo) is stalking his victims make this film an impressive hybrid of genres.

The story follows a merchant ship that lands on a planet, responding to a distress call. After a crew member is attacked by a mysterious creature, they return on the ship and try to kill the creature that is now attached to Kane (John Hurt). Once they get rid of the alien, everything seems to go back to normal, until the famous dinner scene, in which the Alien comes out of Kane’s body.

The fact that it happens while the crew is eating, makes the moment even harder to watch and adds a new subgenre to the blend: body horror. This is the key scene of the movie, because it shows how little humanity really knows of outer space, and that it should fear this aspect. After the Alien escapes, it will grow very fast and stalk the rest of the crew, led by officer Ripley (Sigourney Weaver).

Another key moment is when Ripley discovers that Ash (Ian Holm), the science officer, is an android programmed to bring the specimen back to Terra. When the crew also finds out that their lives are expendable, they realize that they’re just pawns of a greed-driven corporation. The scene contains many themes and ideas, but more importantly, it talks about the use and future of technology. Sabotaged by the robot and hunted by the Alien, the crew’s attempt to escape becomes a nightmarish ordeal that is still haunting to watch. 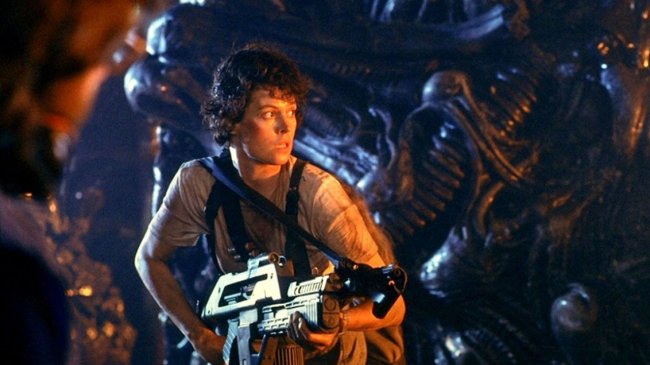 The sequel, directed by James Cameron is more of an action movie set in a sci-fi environment. His film follows a squad of soldiers that lands on the planet from the first movie. The planet is colonized, but all contact is lost. The story’s protagonist is still Ripley, who is found after 57 years of drifting in space in a state of deep sleep. She finds out that her daughter is dead and is still traumatized by the memory of the monster.

A very important scene in the movie is when the team goes deep into the lair of the monsters. Even though they`re on a mission to rescue the colonists, the soldiers represent the aggressors in this scene. Yet, their firepower will prove ineffective against the numerous aliens, and the monsters will take control of the situation.

Cameron’s vision is different from Scott’s fear based perspective and sees the encounter more like a struggle between two species that are trying to overcome each other. But the filmmaker also retains the horror aesthetic from the first movie when the fight is seen through the cameras on top of the soldier’s helmets. This adds a chilling effect as Ripley watches the images from the safety of a vehicle and the only thing the audience can do is share her feelings of fear and feebleness.

Ripley is skeptical of the presence of an android in the squad, due to her experience with Ash, but the film is comforting when it comes to technology, and Bishop (Lance Henriksen) will actually be a very helpful character. In Aliens, the antagonist among the humans is a direct representative of the corporation.

Burke (Paul Reiser), the one that asked Ripley to come with the marines, is more concerned with the damages that the colony will sustain and he wants to bring some aliens back to Earth, for study. Through Burke’s lack of empathy for human life and profit-driven actions, Cameron meditates upon the greed of the corporations and the human nature.

The final battle between Ripley and the queen of the aliens is the battle between two maternal figures that desire the continuation of their respective species. After she burns the eggs in her lair, the monster attempts to kill Newt (Carrie Henn), a girl that survived the killings and with whom Ripley developed a mother-daughter relationship.

When she defeats the alien using an exoskeleton cargo-loader, Cameron reaffirms his technophilia and sends the clear message that humanity can conquer space only with a better understanding and harmonious use of technology.