The story follows Sam (Sam Rockwell), who is working alone on Moon for a corporation that harvests a resource that helped diminish Earth’s power problems. He is at the end of his three-year assignment and can’t wait to return to his wife and daughter. After an accident, he wakes up in the infirmary but knows something is wrong. He eventually finds the Sam that had the accident and they start to wonder which one is a clone of the other. From this point, a series of bewildering and heartbreaking moments begin to unfold.

The title of the film, and the fact that its set on earth’s natural satellite, makes a very strong statement about space travel. The moon is treated as mysterious and fascinating as any planet depicted in fiction, and it represents the filmmakers attempt to meditate upon humanity from inside its territory. He makes this intent clear through so many beautiful shots in which the Earth is seen from the Moon. In this way, the viewer is placed on the Moon, with Sam, gazing upon Terra.

With these shots, the audience can also feel Sam’s loneliness, a feeling that is not explored only from the point of view of an astronaut but as basic human emotion. His longing for his family, monotonous tasks and the confusing encounter, make him a nervous wreck.

Both of them are desperate to find the truth and leave the Moon, but can only do so if they negotiate with GERTY (Kevin Spacey). This multidimensional character is always a pleasure to watch and it may very well rival HAL as the best AI in science fiction.

If Kubrick’s 2001 is the most influential SF film in history, then Moon is the greatest response to that influence. With its heart-pounding score (Clint Mansell), impressive lead, intimate atmosphere and philosophical reflections, Jones’s sublime film has become the new essential masterpiece of space cinema. 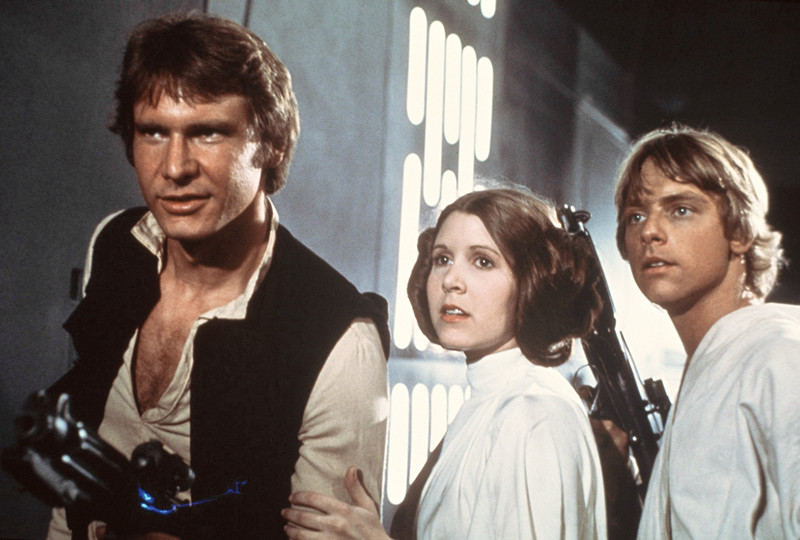 The first, and probably the best film of the newly-revived franchise, A New Hope, as it is also called, is one of the most important movies in the history of Hollywood. It’s cultural impact was huge, it is considered to have reinvented the concept of blockbuster and it gave the power back to the producers at the end of the New Hollywood period (1964-1982). This helped establish the franchise driven film industry that is so well known, today.

The film tells the story of Luke Skywalker (Mark Hamill), a farm worker that ends up in the middle of the struggle between the Rebel Alliance and the Galactic Empire. The characters which he will meet on his journey have become iconic and continue to influence the franchises of the 21st century.

Han Solo (Harrison Ford), Princess Leia (Carrie Fisher), Obi-wan (Alec Guinness), and Darth Vader (David Prowse and voiced by James Earl Jones) are all characters that give the story of the battle between good and evil, credibility and richness. At the same time, Luke`s coming of age adventure is masterfully interwoven with themes such as friendship, decadence, and in the sequels, family.

The success of this epic blockbuster brought back the science-fiction genre into mainstream cinema, even though the film itself is more fantasy driven. The space is Lucas`s playground, in which he invents his own planets and species to build a create a world that looks like a fairy tale set in space.

Luke seems to be taken out of such books, and he has the helpers to prove it. But R2-D2 (Kenny Baker), C-3PO (Anthony Daniels) and Chewbacca (Peter Mayhew) are not some fantastic episodic characters. They fight alongside the protagonist and contribute strongly to the sense of wonder of Star Wars, a feeling that makes up for lack of scientific and philosophical depth of the film and offers the audience a truly epic adventure.

Tarkovsky is one of the greatest filmmakers in the history of the medium. His filmography consists of only seven film, but they’re all considered works of masterful direction and depth. His version of Solaris is an intimate reflection on memory and human nature that combined art cinema with science fiction.

The story follows Kelvin (Donatas Banionis), a psychologist that is sent to a station orbiting a distant planet. He is told to find out what makes the crew go insane. Soon, he discovers that his deceased wife has been materialized on the station. At first, he embraces the idea that he can relieve his life alongside her, but, with the help of the other crew members he realizes that she is just a projection of his mind and can`t live without him.

As with all of Tarkovsky’s films, Solaris is full of reflections on religion and spirituality. The planet below the station acts like a God that brings the dead back. Each time Hari (Natalya Bondarchuk) dies, she returns unharmed. This challenges the laws of nature that the crew members know so well, and therefore, they do not consider her to be human.

While Kelvin still affirms that she is his wife, she becomes so human that she starts to wonder about her nature. She questions her past and identity and finally, commits suicide to free the psychologist form his burden. Her awakening is most terrifying for her, as she comprehends the fact that she can’t die.

Hari is the film’s most interesting character in the film because she is an alien projection that learns what is means to be human. For her, and indirectly for Tarkovsky, it signifies the ability to sacrifice oneself for the better of the loved ones.

When Soderbergh said he is going to remake Solaris, he mentioned that in fact, he is going to adapt the novel with more fidelity. His version has a faster pace, adds grief as a major theme and focuses more on the mystery of space.

In the American version, the two scientists are not only supporting characters but they have their own dramas. Gordon (Viola Davis) sees the phenomenon as nature-altering and fully represses her projection, while Snow’s (Jeremy Davies) projection will have violent and twisted consequences. Because of the grief and guilt he`s feeling, Kelvin (George Clooney) will be the only one that will accept his projection, and will soon be seduced by the planet and the image of his wife, Rheya (Natascha McElhone).

The theme of memory is an important theme in Soderbergh’s version as well. His wife complains that she does not have her own memories and that she is suicidal because he remembers her in that way. Despite her warnings, he accepts the simulacrum in which he lives and does not want to go back to Earth.

This second version of Solaris is less about spirituality and space travel as a religious experience and focuses more on the wonders of the Universe, which may alter the very laws of nature.

This Kubrickian masterpiece is the one film that changed the course of sci-fi in a period when the genre was considered campy and childish. With its deep reflection on numerous themes and revolutionary practical effects, this amazing cinematic space trek fascinated many viewers and confused even more.

The story begins at the beginning of time, when Terra is born. Its sublime atmosphere is underlined by the very first seconds, in which a black screen is accompanied by a chilling sound of unknown origin. We are left to believe that this is the birth of the Universe. The rest of the film is separated into 3 chapters. In the first, a tribe of man-apes encounter a black monolith.

Apparently guided by the energy of it, the apes start using bones as tools. In the second chapter, the monolith is found on the surface of the moon, by the space travelling human being. As time passes, the third chapter makes its way into the story. This final part of the movie tells the story of a space ship that is heading for Jupiter.

On the way to the planet, the ships computer, HAL 9000 (Douglas Rain), malfunctions and interferes with the decisions of the crew members. HAL`s malfunction and his subsequent discussion with David are two moments that massively influenced the way sci-fi has used and depicted artificial intelligence.

After deactivating HAL, David embarks on a surreal journey to Jupiter. Once there, he will encounter the black monolith that marked the entire movie. The scene in which he watches himself age is one of the most influential and confusing scenes in the history of SF, but what follows is even more bewildering.

Are aliens linked to our origins? Are the linked to our future? These are two of the many questions that Kubrick is trying to answer in his paradigm changing meditation upon humanity’s place in the Universe.