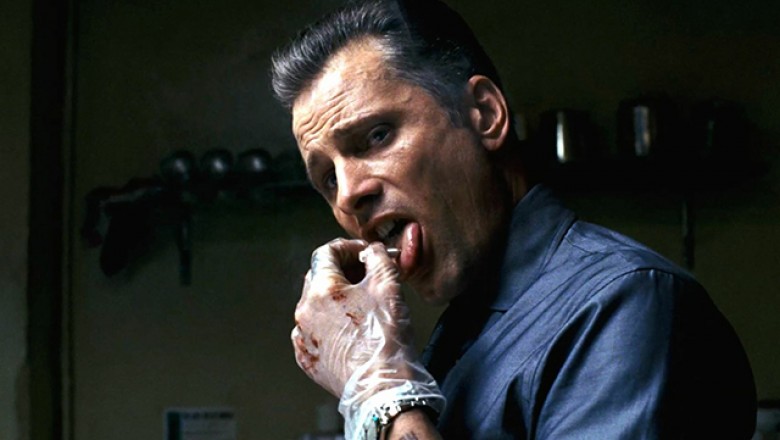 Born in Canada in 1943, David Cronenberg came from an artistic background. His father was a journalist who owned a bookstore and his mother played piano for the national ballet. Cronenberg studied classical guitar as an adolescent, but it was his father he took after, writing and publishing short eerier stories from a young age. He pursued this talent with passion and, as the ‘Baron of Blood,’ he has enjoyed a five-decade film career as a writer and director.

His first three titles were distinctive horror films—“Shivers” (1975), “Rabid” (1977), and “The Brood” (1979)—and although these were largely overlooked, they showed promise and originality.

As his career progressed into the ’80s and beginning with 1981’s “Scanners,” Cronenberg gained positive attention for his controversial films, which include the seminal cult hits “Videodrome” (1983), “The Dead Zone” (1983), and “The Fly” (1986). These showcased Cronenberg’s abilities not only as a director of dark material, but as an intriguing screenwriter of horrifying and influential stories.

A visionary without concern for mainstream success, Cronenberg blended horror and sci-fi tropes into his original and unnerving films, preferring to steer clear of big blockbusters. His talents earned him the invitatins to direct “Star Wars: Episode VI – Return of the Jedi” and “Top Gun,” but his unique directorial vision led him to reject these offers. It was only in the mid-2000s that Cronenberg began to move away from the gory body-horror films he is known for.

Trauma, disease, and the revolt of the human body have been common themes throughout his catalogue, specifically the harrowing transformations the body can undergo and the psychological side effects of such transformations. His distinctive work has resulted in books being written about him, such as Ernest Mathijs’ “The Cinema of David Cronenberg: From Baron of Blood to Cultural Hero.”

Cronenberg finally brought the book to the screen, but rather than making a straight adaptation, he used the book as a model only, intertwining biographical aspects of Burroughs’ life into the story. Cronenberg’s childhood obsession with insects and bugs initially drew him to the story, and so his production of the film also included strong science fiction undertones, an early step away from his outright horror filmmaking.

“Naked Lunch” follows William Lee, portrayed by a post-“RoboCop” Peter Weller, as an exterminator whose wife is stealing his job-specific insecticides due to her uncontrollable drug addiction. This leads to a number of psychedelic trips that involve a talking insectoid typewriter, doppelgangers, giant bugs, and an accidental murder in a William Tell-esque imitation from Burroughs’ own life that went exceptionally wrong.

While the sheer hallucinatory madness of the film must be seen to be believed, it unquestionably produced several great performances from a cast that clearly enjoyed crafting such a surreal piece of cinema.

Ian Holm, Roy Scheider, and an unhinged Judy Davis (as William’s wife, Joan) all turn in memorable performances, but front and centre in the film is Peter Weller, who, while compelling in any role, turns in a portrayal unlike anything else in his filmography, depicting a disillusioned version of Burroughs, complete with deadpan mannerisms and lacking any relatable human emotions, bounding from one bizarre scenario to the next, trapped inside his own mind.

Weller, like the character he portrays, seems to be governed by “bug powder,” the experimental psychedelic mentioned in the film.

Cronenberg’s “A History of Violence” was critically acclaimed upon its release, applauded by film fans and critics alike. Written for the screen by Josh Olson and based on the graphic novel of the same name by John Wagner and Vince Locke, the film was nominated for the Academy Award for Best Adapted Screenplay and Best Supporting Actor (William Hurt).

At the heart of the tale is the mild-mannered Tom Stall, played by the captivating Viggo Mortensen, as he is involuntarily thrust into the media’s spotlight as a hero after killing two crooks while preventing an armed robbery. As his face is broadcast from TV screens, forgotten demons and mysterious, dangerous people from his former lurid life come back to haunt him and his family.

The film features a stellar supporting cast, including Maria Bello as Tom’s faithful yet indignant wife, William Hurt as Tom’s long lost brother, and Ed Harris as Carl Fogarty, an intimidating, shadowy figure claiming to know the truth about Tom’s past. Although Hurt received the majority of attention for his memorable performance in the film’s final act, it is Harris as the mysterious Carl Fogarty who deserves the most praise.

Harris is restrained yet charismatic as he fills each and every scene with unease, teasingly intimidating Tom and his family, provoking them day-to-day before finally acting out. It is a chilling moment when he tells Maria Bello’s character, “Ask Tom how he once tried to rip my eye out with barbwire. And ask him, Edie… Ask him how come he’s so good at killing people.”

Harris is a truly mesmerising actor who can effortlessly transform into ruthless and terrifying characters. Here, he superbly creates a remarkable villain worthy of the stunningly orchestrated thriller, “A History of Violence.”

Jennifer Jason Lee has always been an astonishingly underrated actress. In recent years, she has turned in incredible performances in the likes of “The Hateful Eight,” “The Machinist,” and “Road to Perdition,” while her earlier years in front of the camera provided us with standout roles in cult classics such as “The Hitcher,” “Single White Female,” and The Coen Brothers’ “The Hudsucker Proxy.”

Leigh has consistently proved herself to be a reliable and diverse actress in a number of different genres, never failing to be anything less than mesmerising.

Here, she portrays a virtual reality games designer, Allegra Geller, who is testing out her latest creation on a focus group of loyal fans. She is attacked by extremist assassins, damaging her latest invention, a fleshy-looking pod that allows one to enter the gaming world. She is eventually saved by a young marketing trainee, portrayed by an underdeveloped Jude Law, in a spiralling and unpredictable adventure in which the pair must play their way through the game.

This leads to a considerable amount of horrific scenarios within the game, full of visually striking action sequences and nauseating grotesque imagery, as the pair plays through the vividly twisted events, unaware of what will present itself next.

While David Cronenberg is skilfully and deeply enthralled in spinning a sickening, smart, and intriguing universe like no other, full of unique outlandish entities and a surprisingly witty script that makes one deliberate throughout, it is Jennifer Jason Leigh who turns the gears of the film. Perfectly cast, she is the shining diamond of “eXistenZ.”

At the time of release, “Dead Ringers” was a stunning piece of technical wizardry. Jeremy Irons played twin brothers in one of his finest performances to date, a feat that has since been widely imitated, such as in Fincher’s “The Social Network” and by Tom Hardy in “Legend.” In the late-80s though, this was a miraculous special effects achievement.

However, the film as a whole, while adored by critics, struggled to captivate audiences. This was likely due to the film’s lurid subject matter, which dealt with nihilism in a devastating fashion, not to mention the fact that this film was Cronenberg’s follow-up to his enormously successful “The Fly,” a daunting task for any feature.

Nevertheless, Irons was fascinating as identical twins, Beverly and Elliot Mantle, a pair of narcissistic gynaecologists. Inspired by true events and real people, the Mantle brothers take full advantage of their physical similarity, sharing absolutely everything in their lives.

Despite similarities in appearance, though, Elliot is a confident extrovert who generally gets the first pick of everything before sharing with his much more timid brother, Beverly. They lead lives in which one brother’s weakness is the other’s strength, as displayed here in both their personal and professional capacities. It is only when shy Beverly falls in love that their relationship is strained.

The material is at times disturbing and questionable, as “Dead Ringers” is drenched in depraved acts that take sibling bonding to a new and abnormally disconcerting level.

For Irons, his double performance here led to his becoming a household name in the 1990s and paved the way to roles in several blockbusters, such as “The Lion King,” “Die Hard with a Vengeance,” and the performance in “Reversal of Fortune” that finally earned him an Oscar two years later. When he accepted his Academy Award for Best Actor, Irons even thanked Cronenberg in his speech.

A film nominated for the Cannes Film Festival’s top prize, the Palme d’Or, “Spider” is an exquisitely crafted psychological drama about a schizophrenic man known as Spider, and his very loose hold on reality. Living in a half-way house in London, the film follows his release from a psychiatric ward and he progressively descends further into madness at the hands of the mental illness known as Capgras delusion.

The screenplay was handed to Cronenberg by Patrick McGrath, and Ralph Fiennes was already interested in undertaking the titular role of Spider. The film stands as one of the director’s most thoughtful and provocative drama pieces to date. It was during this time that he began to shift away from the body horror genre which he had helped pioneer, taking on much more mature and diverse projects.

Eventually becoming a passion project for the director, Cronenberg completed the film’s production without being paid, awaiting the box office turnover before collecting a salary.

Fiennes, an actor who never fails to be anything less than fascinating, produced a devastating and sympathetic depiction of Spider. Flawlessly handling the touchy subject matter of mental illness, the actor gives a truly disturbing performance, further elevated by Cronenberg’s expert craftsmanship in portraying the several levels of varying realities through the eyes of Spider.

Incredibly representing key traits of a paranoid schizophrenic, a mumbling and obsessively distrustful Fiennes is mesmerising throughout, a role which he fervently sought to undertake upon reading the initial script. Here, he fabricates one of his finest performances to date in a long list of breath-taking roles.