Highly underrated and often misunderstood, “The Brood” was one of three astonishing horror films Cronenberg directed in the late 70’s. In the years since its release, Cronenberg has gone on to claim that it was somewhat inspired by actual events that occurred in his own life, such as his turbulent marriage, his subsequent divorce, and the child custody battle with his first wife prior to the film’s production.

Darkly joking that in the final climatic scene in which the character loosely based on his separated wife is strangled was very satisfying to film, Cronenberg went on to state that this film was his own deranged and version of the classic Oscar-winner “Kramer vs. Kramer,” released the same year.

British actress Samantha Eggar, who only worked on the film for a total of four days, was cast as Nola Carveth, a severely disturbed woman devoid of rational thinking who is taken into psychiatric care during her child custody battle with her husband, Frank (Art Hindle).

Nola is under the psychiatric care of an exuberant and unconventional doctor known as Hal Raglan (Oliver Reed), who employs a number of dubious techniques and experimental treatment methods on his patients, and in true horror fashion, this coincides with a number of brutal murders, apparently at the hands of a group of rage-induced children.

Upon release, reviews for “The Brood” were mixed, but it has since been hailed as a low budget cult classic, with a garishly horror set up, a cruel yet daring real life origin story, an incredible score from none other than Howard Shore (on his first film project), and a number of stomach-turning scenes which have since become Cronenberg’s trademark.

When it is finally revealed that the unstable Nora, during her breakdown in mental health, can use her madness-induced maternal mentality to spawn a host of grotesque and violent offspring, the titular brood, Eggar truly shines. Gloriously volatile and relentlessly unpredictable, she holds nothing back.

Able to give birth to the hideous creatures that carry out her destructive and selfish requests, Eggar, who seethes her way through every single scene until she finally erupts in the films blood-soaked conclusion, is spectacular. It is a role that will remain unsurpassed as suggestions of a remake continue to surface. 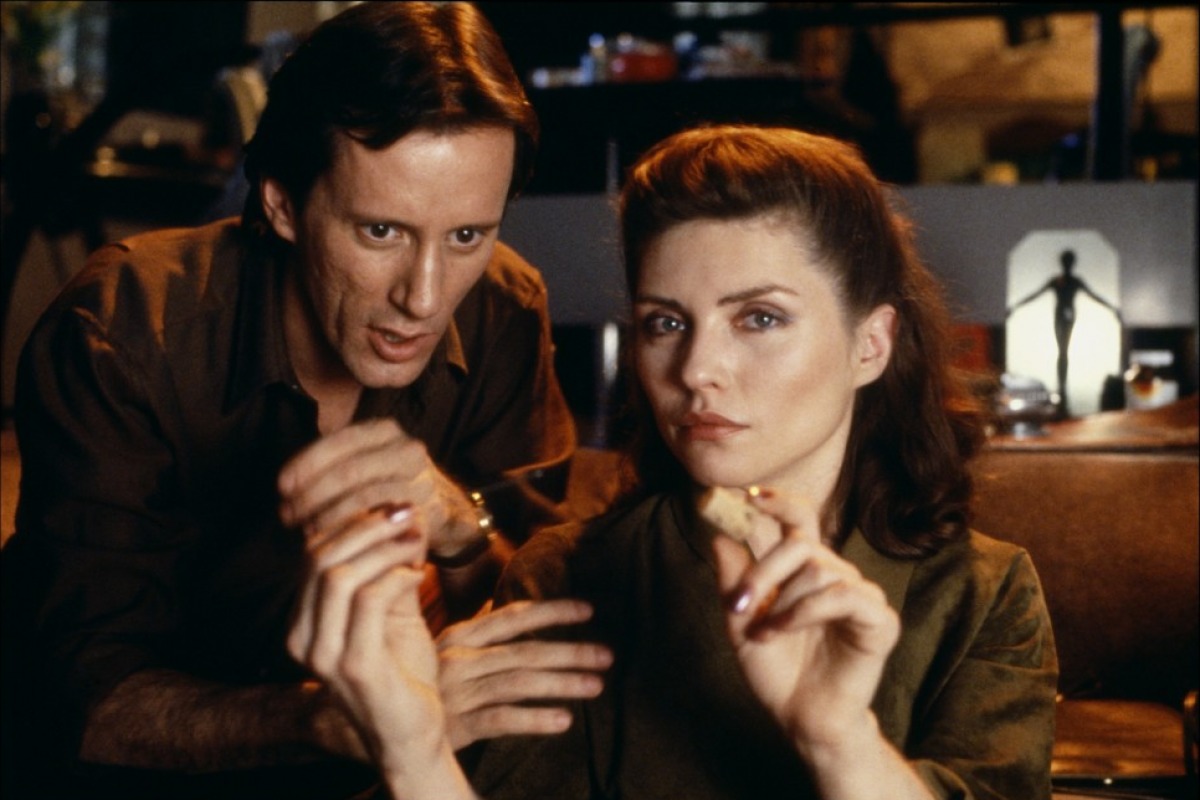 Along with the pivotal “Scanners,” “Videodrome” is one of Cronenberg’s most seminal and influential works. It was fundamental in constructing the subgenre of the venereal horror genre. With the assistance of a congregation of relatively unknown actors led by a never-better James Woods and Blondie vocalist Debbie Harry, Cronenberg went on to produce a truly irreplaceable and adored piece of cinema within the cult horror community.

James Woods stars as Max Renn, the unscrupulous executive of a cable television channel, a peculiar man whose sole desire is to bring debauched programmes to the night time schedule of his channel. This culminates in his witnessing a number of distressing television shows, in turn becoming fascinated and controlled by his disturbing discoveries and leading to vivid and haunting hallucinations.

What starts as a cleverly made piece of social commentary quickly, in true Cronenberg fashion, descends into a depiction of nauseating imagery and body transformation, a disgustingly dark marvel to behold, if one can stomach it.

“Videodrome” serves as a cleverly orchestrated reflection on humanity and its obsession with technology and sex, profoundly held up by James Woods’ charismatic and beguilingly weird performance as the obsessive and disreputable television executive with a lust for the corrupt and depraved. 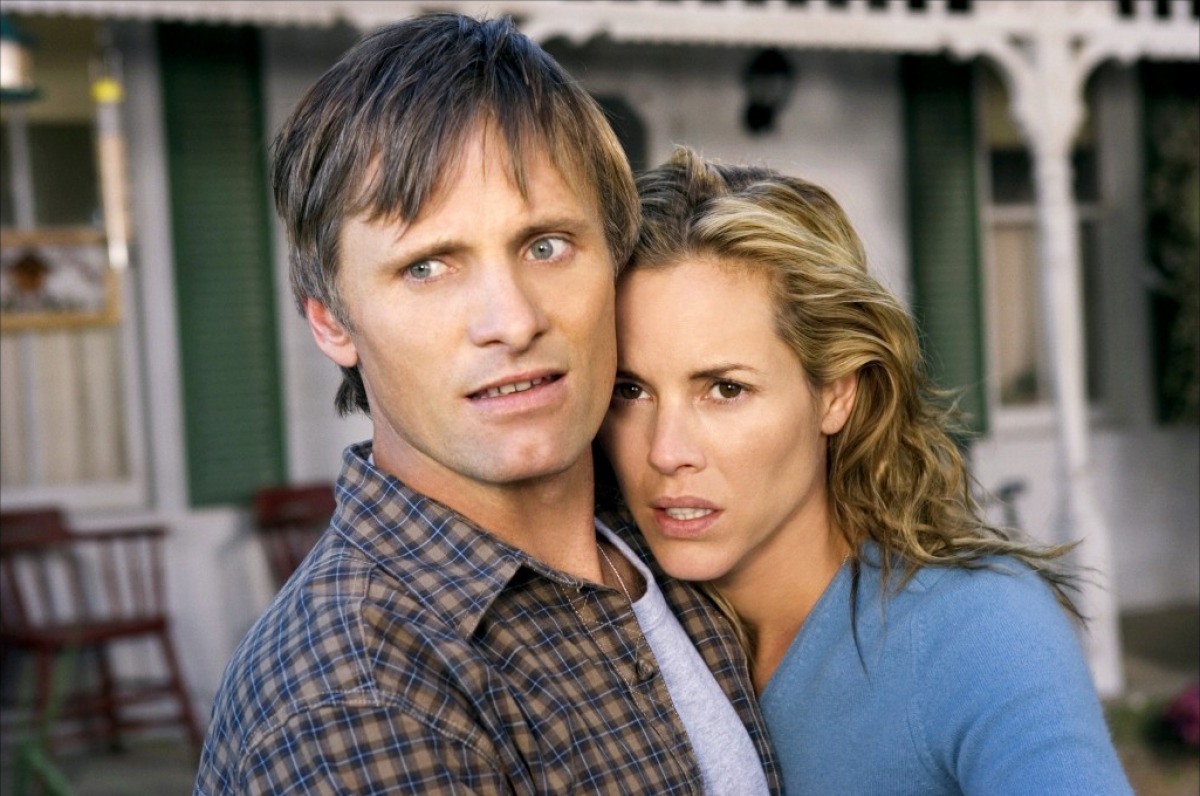 “A History of Violence” marked the first collaboration between Viggo Mortensen and David Cronenberg, casting the highly talented and diverse actor as the film’s lead as a quiet and reserved café shop owner and dedicated family man, known to the local community as Tom Stall.

Following a violent but heroic act one evening, he becomes a national headline story, putting his name, face, and location on a number of news reports, which in turn brings a lot of unwanted attention to his doorstop, including the menacing appearance of some dubious and forceful characters who reveal that Tom may not be exactly who he claims.

Portrayed with a controlled and intriguing level of complexity, the creation of Tom Stall is one of Mortensen’s finest and most breath-taking roles to date. Shrouded by mystery, the role was originally turned down by Harrison Ford.

Tom Stall is a man with a enigmatic and dark past, unknown even to his own family and local community, and Mortensen expertly plays either side of the character’s demeanour with the charisma and expert control he has so frequently shown in the past, equally as impressive as the quaint café owner as he is as the man he once was in his own haunting past.

Equally believable as both men, the finest moments within the film are those which show the horrifying turn in mannerisms by Mortensen, where he crosses from shy mannerisms to violent confirmations of his previous identity.

His body language and attitude completely adjust as he becomes the person he spends the majority of the film denying he is, most finely executed in a brutal scene outside of Tom’s house where he first appears calm and collected, trying to defuse a heightened situation, and when it doesn’t go his way, he is eventually overwhelmed by the violent man inside himself.

Mortensen, as the core of “A History of Violence,” flawlessly embodies every single characteristic required of him for the complex role of Tom Stall, a man full of pain and regret, hiding a past that he is not proud of, happily leading a reformed, family-orientated life in a sleepy rural town. Yet, when it is required,

Mortensen shows the unhinged and ruthless man Stall used to be, confidently portraying the other side of the coin as a morally ambiguous killer, whose true nature is to protect himself by any means necessary.

Originally a project for Tim Burton, “The Fly” is Cronenberg’s magnum opus, a beautifully crafted, nightmarish, and harrowing tale of the tragic Seth Brundle. Based on author George Langelaan’s short story of the same name as well as Vincent Price’s “The Fly” from 1958, Cronenberg expertly creates an enthralling story. The film is gripping from start to finish thanks to its riveting narrative, its ground-breaking visual effects, and a collection of phenomenal performances from the actors.

When Cronenberg first suggested Jeff Goldblum for the role of Seth Brundle, it was met with immediate disapproval. Producers didn’t think he was a big enough name to handle the role while the make-up artists didn’t believe he would be identifiable enough under the cosmetic effects.

It was only upon Cronenberg’s relentless persistence that he eventually got his way, casting Goldblum as the film’s lead. An actor respectful of the source material and the previous film, he contacted Vincent Price to say he hoped Price would enjoy his film as much as Goldblum did his.

Cronenberg created a masterpiece with “The Fly,” blending elements of various genres, including a romance, a heart-breaking human tragedy, and a nauseating horror film. At the heart of the piece, Goldblum brings a human approach to the role of a scientist who could easily have been an android devoid of emotion, keeping audiences invested in Brundle’s devastating fall.

Cronenberg also utilized characteristics of his own parents in the film’s front-and-centre love story. Goldblum’s Seth plays the piano, like Cronenberg’s mother, to impress Geena Davis character, Veronica, a journalist in the vein of Cronenberg’s father. The pair go on to create a significant love story from the very beginning, which is both relatable and heart-warming, masterfully adding the required depth and emotion required for its distressing conclusion.

However, once the audacious experiment at the centre of the film goes drastically wrong and Brundle begins to transform into a disfigured fly, he is at his most captivating, charismatically luring audiences in to relate with the doomed character.

Cronenberg’s smart screenplay and Goldblum’s essential performance leads the audience to connect emotionally with the beast, even when he is at his lowest and most depraved form and undertaking volatile and indescribable acts of horror, an accomplished feat for any actor.

“Eastern Promises” centres on the inner-workings of the Russian mafia in London, as well as the courageous actions of a brave midwife who investigates the gang to uncover the secrets behind a dead teenager’s diary and the gangsters’ connections to a newborn orphan.

With Naomi Watts as the midwife, Anna, and a host of incredible actors as various members of the Russian mob, including veteran Armin Mueller-Stahl in an Oscar-nominated role as the head figure within the organisation, Vincent Cassel as his son, and of course Viggo Mortensen as Nikolai, a character who starts the film as a low level henchman. “Eastern Promises” follows Nikolai and his rise through the ranks, as well as the complicated relationship he builds with Naomi Watts’ character.

“Eastern Promises” was the second pairing of director Cronenberg and Mortensen, and the film clearly indicates the director’s shift in style upon hitting middle age. Mortensen, as the villainous yet highly amiable Nikolai, is stunning throughout the film, covered in tattoos telling a vivid tale of his criminal achievements.

In the film’s most memorable scene, Mortensen undertook his own stuns: naked in a bathhouse and bearing all for the camera, Nikolai brutally fends off and dispatches two hitmen with a linoleum knife. Mortensen, who spent some time in Russia and Siberia without the aid of a translator in the preparation of his role, is at the top of his game, achieving such incredible results, producing a qualified masterclass in method acting.

“Eastern Promises” is an attractively composed crime drama, setting a remorseless and tense atmosphere, and expertly created by everyone involved both in front of and behind the camera. The film finally earned Mortensen acknowledgement from the Academy Awards, which nominated him for Best Actor in a Leading Role at the 80th Ceremony in 2008.

Author Bio: Dan Carmody, born and raised in Doncaster, England, an area with very little in the way of film connections (The Full Monty was filmed down the road). When not working full time as a Civil Engineer, his one true passion is cinema, relating back to the early 1990’s when his mum showed him a lot of horror films way before he should have been allowed, an avid follower of all film genres, both classical and modern.  Also enthusiastic about video games, making lists and cheese.