In the early 1990s, academic B.Ruby Rich coined the term “New Queer Cinema” in “Sight and Sound” magazine to describe the movement of queer independent filmmaking. The term “queer” was used to include gay, lesbian, bisexual and transgender identities and experiences, along with fluid sexuality and non-traditional understandings of sexuality.

The term has evolved with new trends entering the spectrum of stories told in this genre. If the ‘90s presented fictional or real lives of queer people as outsiders in conventional society, typically dealing head-on with political movements and the AIDS crisis, the 2010s are driving this genre towards universal interest in its viewership.

Thanks to key films such as “Brokeback Mountain,” (2005) “Milk” (2008) and “The Kids Are Alright (2010), the path to presenting complex LGBT characters and experiences is clearer than ever. We’re witnessing the worldwide fall-of-the-curtain when it comes to increasing visibility. The exciting number of stunning inclusive films mark a major cultural shift in what the audience regards as “ordinary” and draws us closer to acceptance through art.

This list intends to underline the variety of characters, genres and representations available to us now in the shape of great filmmaking. The 2010s have been a storytelling paradise, and it is a big deal that these films are a part of it. Women directors, minorities, films of different nationalities and the cessation of the white-straight-male dominance in the industry are also an important part of cinema’s own evolution.

LGBT+ main characters in relevant films are still scarce, so we’ve gathered the ones with singular stories and filmmaking techniques supporting a solid LGBT+ main character and/or their relationships, in the past 5 to 6 years. This means that wonderful features such as Pride (2014) couldn’t be included for its focus on an LGBT group of people. 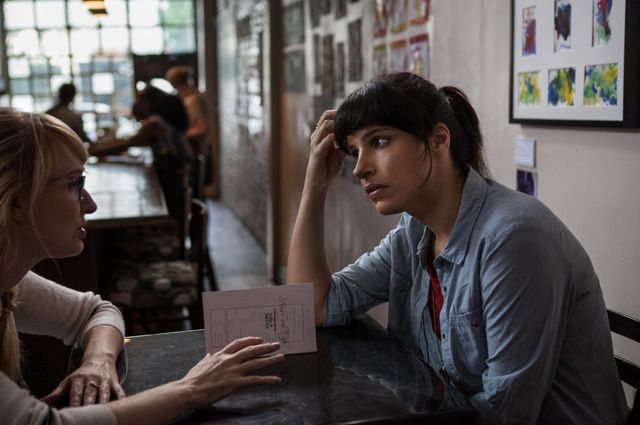 With a successful Sundance premiere and critical acclaim comes an interesting take on modern love while being from an immigrant family in the US. This American comedy film written and directed by Desiree Akhavan stars Akhavan as main character Shirin, a bisexual Persian-American woman living in Brooklyn.

In the film’s timeline, Shirin is overcoming the end of her relationship with her girlfriend Maxine (Rebecca Henderson). The breakup leaves her homeless and jobless, and she has to get her life together while getting over Maxine. Eventually, she moves in with strange roommates and finds a job teaching 5-year-olds how to make movies.

One of the film’s most relevant side stories is related to Shirin’s conservative family – specifically her parents. They don’t know she’s bisexual, thinking Maxine was just her roommate, and they don’t understand why their daughter is suddenly moving out.

Considering the rising cliché of 20-somethings roaming around Brooklyn and their difficulties, Akhavan took her approach further with the inclusion of an LGBT storyline that perfectly encapsulates what it’s like to hide her identity from her family.

Doing so, she still managed to make a heartfelt comedy and getting her point across, with something important to say in every scene. It’s unique in a way that no one else could’ve accomplished its final result and begs the question to why there aren’t more bisexual stories being told as successfully as this one. 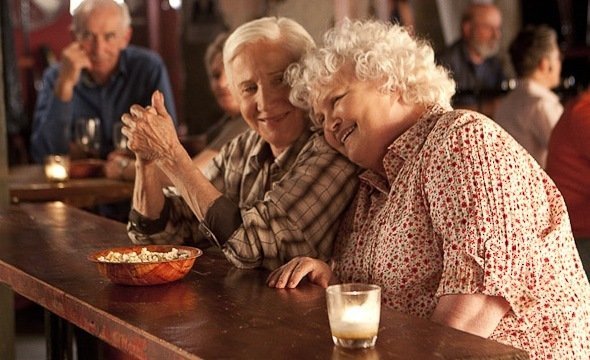 When it comes to a full representation of elderly queer love, “Cloudburst” is one of the best films in the 21st century. It carries inexplicable charm, through laugh-out-loud comedy and heart-warming spirit. Director and writer Thom Fitzgerald gathered two Oscar-winning actresses – Olympia Dukakis and Brenda Fricker – to portray two septuagenarian lesbians.

The characters, Stella (Dukakis) and Dot (Fricker) have been together for 31 years, sharing a home in Maine, USA. Their connection is deep and everlasting, but not everyone can see it.

Dot’s conservative granddaughter refuses to accept that they are a couple and visits them with a court order that allows her to take Dot to a nursing home. Stella rescues her and the two leave on an open-road adventure to Canada, after deciding they should finally get married. On their way, they pick up Prentice; a hitchhiker who’s also a young and handsome wannabe dancer, and he too becomes a part of their journey.

“Cloudburst” is a very needed and highly recommended film in the LGBT community, if only for its focus on life-long relationships and the true meaning of family. The actresses do such an amazing job that one would think they were indeed married, sharing the chemistry and affection of a real couple with tremendous ease. 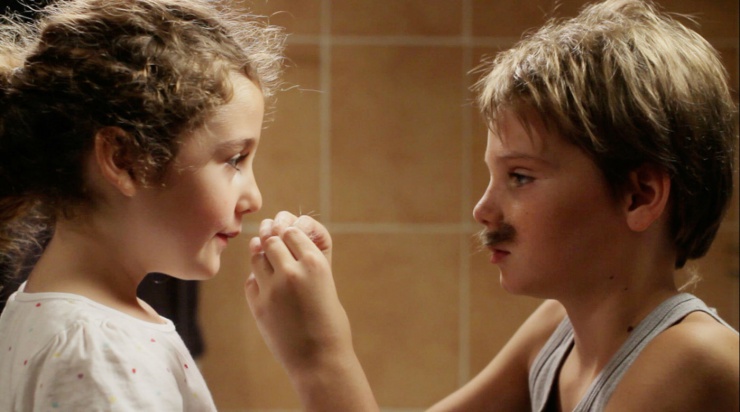 The only title on this list which features a child as the main character is a French drama by Céline Sciamma. Sciamma wrote and directed the story of the Summer of a 10-year-old transgender (whose parents named Laure) who, upon moving to a new Parisian neighborhood and making new friends, introduces himself as Mikäel.

Zoé Héran plays a shy “tomboy” who’s finding the move troubling. At the beginning of the film, he meets a neighbor his age, Lisa, and we’re led to believe he’s a cisgendered boy. It’s not until he’s taking a bath with his little sister at their new place that the viewer gets the confirmation that he has a vagina, and his mother treats them both as “girls.”

When Mikäel steps outside, he’s himself. He plays soccer and makes it seem as if he has a penis just to hide his genitalia. Eventually, Lisa gets closer to Mikäel and develops a crush on him. Just when the boys accept him as one of their own, and his sister learns and accepts that he’s been presenting himself as a boy, his mom finds out and problems arrive.

What follows is what could be a great study on what a more conservative mother’s mentality is regarding this issue: she doesn’t mind that Mikäel (still Laure for her) is a tomboy, but she still wants him to act in culturally-defined feminine ways – which includes making him wear a dress.

Sciamma explores the barriers between gender at such a young age and the creation of an identity unlike anyone else. Her talent in working with young actors is noticeable, and the story vibrates as something that should be more often and better represented in film, but isn’t. 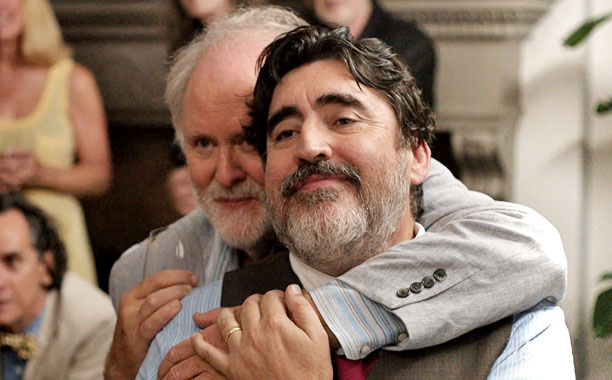 Openly gay filmmaker Ira Sachs directed and co-wrote this quiet French-American drama about an elderly same-sex couple of men from Manhattan, who get married after 39 years together. George (Alfred Molina) is a music teacher in a Catholic school and is fired when the archdiocese finds out about his marriage.

Without a stable income, he and his husband Ben (John Lythgow) can no longer afford their apartment, and are forced to ask their friends and family to stay with them. When none can take both at the same time, they have to separate. Their issues grow bigger and the film gets darker with the rising struggles of missing each other, and having to live apart after so many years together – not to mention the fact that neither places where they’re currently staying at have enough comfortable room for them.

Ben and George must find ways to be together and, most of all, realize how to be a part of a routine that doesn’t involve the other. As it’s been stated, the film “serves as a graceful tribute to the beauty of commitment in the face of adversity.” Its incredible subtlety is present the whole time, all the way until its sucker-punching ending.

Everything about it is believable and understated, yet superior in emotion. Cinematographer Christos Voudouris marks Sachs’s move from celluloid to digital in spectacular fashion, making it all the while sweeter. 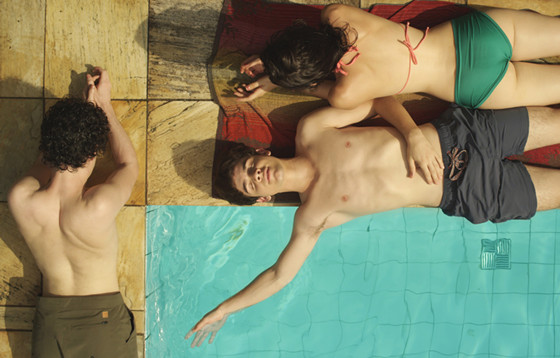 Several LGBT-themed short and long features have been made in Brazil lately, but “The Way He Looks” stole the show in 2014 with its gay teen coming-of-age story. If that seems too ordinary, then its main character being blind certainly changes the tide. Daniel Ribeiro’s directorial debut appears after a short-film with the same cast.

In the feature film, Ribeiro kept the story but gave its narrative a different take. It starts with a Summer afternoon, with main guy Leonardo (Ghilherme Lobo) and his friend Giovanna (Tess Amorim) talking about how they’ve never kissed anyone. When school starts, a new student arrives and starts getting along with the two friends. Curly haired Gabriel (Fábio Audi) quickly gains the attention of fellow girl classmates but stays close to Leonardo.

What follows is both a story of first love and a profound understanding of the struggles of a disability at such a young age. With outstanding cinematography and performances, Ribeiro brings fresh air to the saturated teenage stories and creates a unique piece, strong enough to reach the minds of any cinephile regardless of sexual orientation.