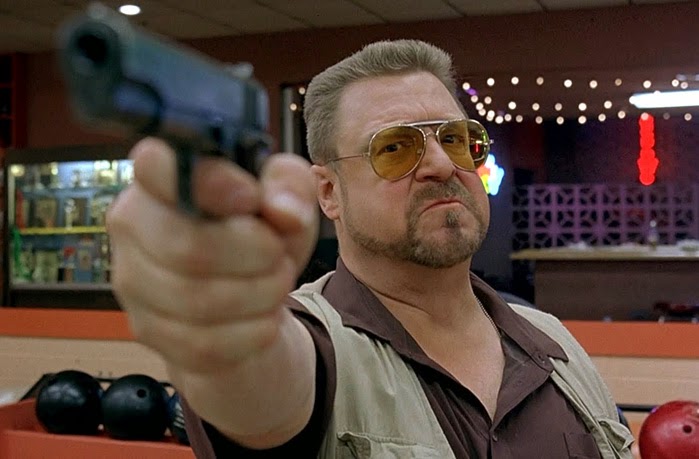 A man of overwhelming height and size, the charismatic John Goodman originally earned a name for himself depicting a collection of loveable and flamboyant characters in family entertainment. Despite being a constant, indispensable actor working in child-friendly capers, Goodman has also frequently lent his impeccable abilities to various other genres, creating a unique back catalogue of unpredictable and varying performances, creating countless fascinating characters.

Growing up in St. Louis Park, Minnesota along with the creative masterminds, Joel and Ethan Coen, he has never wandered far from them. He has collaborated with the brothers more than with any other filmmakers, and the Coens arguably seem to always bring out his finest performances, even in supporting roles.

Among his remarkable portrayals under the sibling’s nimble direction are a hotel-residing serial killer, a Jewish Vietnam vet with a penchant for bowling and expletive-laden rants, and a fading musician whose eccentricity is matched only by his biting sarcasm.

Now a long-term resident of New Orleans, Louisiana, the colossal actor is best known for his success in the comedy genre, not only in cinema, but on stage and on television as well. He has appeared in a number of comedic triumphs, including “The West Wing,” “Community,” and “Saturday Night Live,” not to mention his long-standing work in over 200 episodes of “Roseanne” as the titular character’s long-suffering husband, Dan.

A criminally underrated actor, the larger-than-life performer John Goodman has frequently shown his proficient ability to undertake a number of diverse roles. Appearing in a host of different genres, Goodman is always at his most intriguing in his smaller and more enigmatic supporting roles. Here are his ten finest performances to date. 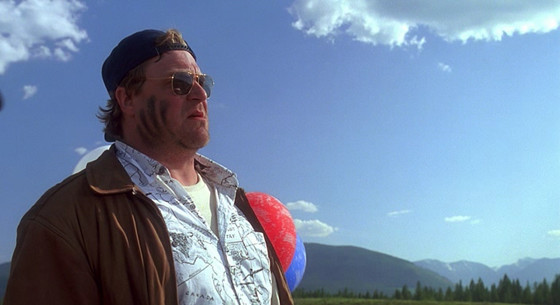 A lesser-known film by blockbuster filmmaker Steven Spielberg, the romantic drama “Always” is a remake of the 1943 World War II melodrama “A Guy Named Joe,” which was directed by Victor Flemming. While not exclusively a scene-by-scene adaption of the earlier film, it does follow the same narrative. In Spielberg’s vision, Richard Dreyfuss plays Pete, a willing and able pilot assigned to douse forest fires from his plane, despite his girlfriend, Dorinda’s (Holly Hunter), concern for his safety.

Convinced by John Goodman’s Al Yackey, Pete reluctantly seeks a safer path of employment. What follows is a series of events that result in Pete’s fiery demise. But his piloting talents are not wasted, as he becomes an aircraft ghost in the afterlife for Ted, a rookie pilot played by Brad Johnson. Pete guides Ted to success, all the while watching as Ted falls in love with his former, mourning flame, Dorinda.

As the scene-stealing Al Yackey, John Goodman ably plays the best friend to Pete and the sturdy shoulder of comfort for Dorinda, loyal to his fallen friend even in his death. Goodman excels in the emotionally affecting scenes and he nails the comedic aspects of the film. His chemistry with Richard Dreyfuss is the foundation of a great comic partnership. 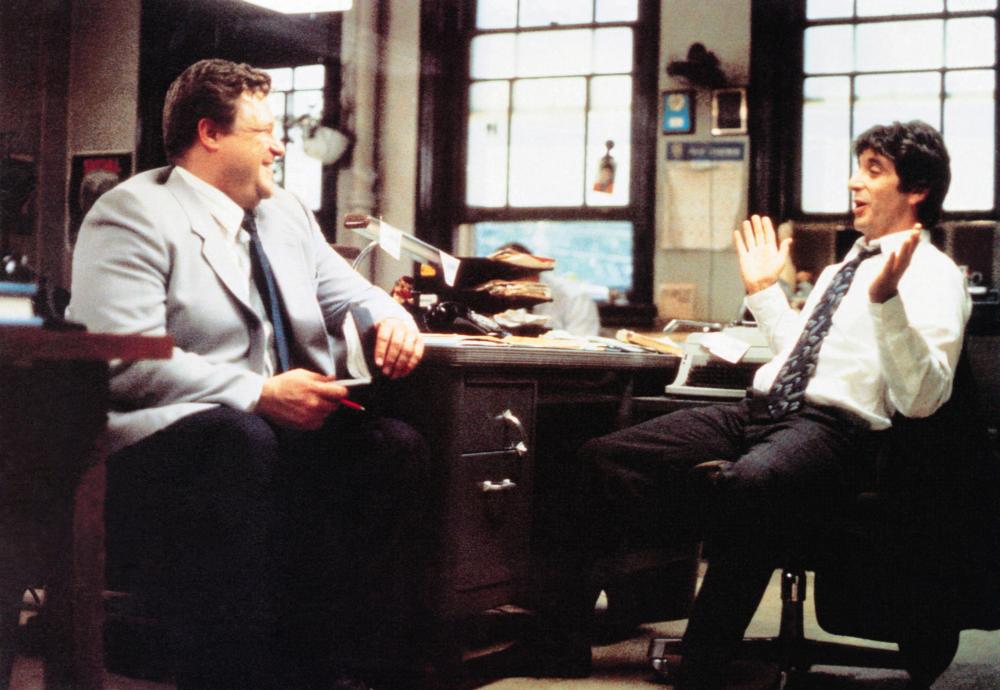 Here, Pacino starred as a burnt out homicide detective Frank Keller, as he tries to uncover the mystery of a New York serial killer who is stalking the lonely hearts columns of the local newspaper for victims. In turn, Pacino becomes involved with a young woman who may, in fact, be the murderer. Pacino’s partner is Detective Sherman Touhey, played by John Goodman.

The thriller and mystery aspects of the film are at times flawed, with a rushed narrative and dubious revelations, it also has some great elements, including the high-calibe acting.

Pacino is captivating as the lead, reminding critics of his dormant talents after “Revolution,” and Ellen Barkin shines in her breakthrough role as the mesmerising Helen Cruger, Pacino’s romantic interest and prime suspect. Finally, it is John Goodman who steals the show, providing both the comedic relief and the loveable sidekick to the moodier Pacino.

Skilfully crafting a charming and comical buddy cop partnership together, Al Pacino and John Goodman are captivating alongside each other. Despite the film’s predominant focus on the relationship of Frank and Helen, Pacino and Goodman created the finest segments of “Sea of Love” whenever they’re on-screen together.

As the pair’s chemistry is immaculate, the most remarkable moments in the film come from the two detectives as they pose as singletons in search of dates as they hope to catch the serial killer. A lesser-known role in John Goodman’s career, but undoubtedly one of his most significant of the late 1980’s to early ’90s. 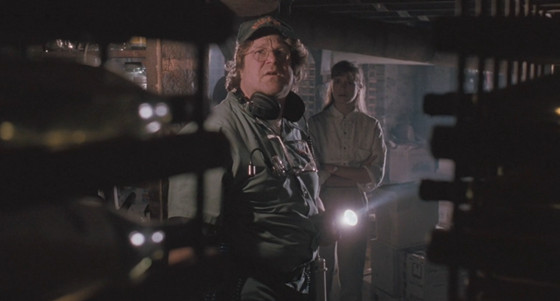 John Goodman again provides the comedic ingredient in Frank Marshall’s skin-crawling comedy horror “Arachnophobia.” The story is of a deadly South American spider that hitches a ride to the United States, prior to taking up residence in Jeff Daniels’ barn, where it subsequently starts breeding with the local talent. Upon forming a terrifying family of eight legged miniature killers, the arachnids proceed to go on a murder spree around the small local community.

It is at this point that the required professionals are brought in to deal with the infestation, including a spider expert, played by Julian Sands, and John Goodman’s over-confident and courageous exterminator, who refuses to be spooked by the small creatures.

Armed with his bug spray and trustworthy boot heel, Goodman’s Delbert McClintock takes everything in stride and remains assertive throughout, most notably in the hilarious scene in which McClintock participates in a high-noon standoff along a garden footpath with one of the poised spiders.

While Jeff Daniels makes solid work of the lead part, the sufferer of the titular phobia, wine connoisseur, and family man Ross Jennings, it is Goodman as Delbert McClintock, with his confident swagger, who stands out as the most compelling contributor. It is in films like “Arachnophobia” where the outstanding comedic talent of John Goodman truly shines, providing the right amount of laughs to alleviate the film’s general dark tone. 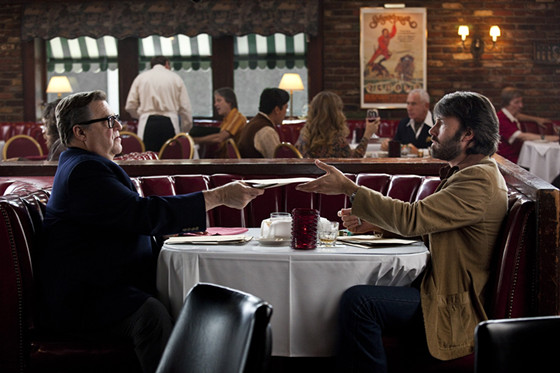 With a well-crafted script and intense camerawork, “Argo” tells the story of a courageous CIA operative and his talented team posing as a Hollywood production company researching filming locations in Tehran, as a cover for the real mission: to rescue six Americans hiding in the house of the Canadian Ambassador to Iran.

While Affleck proves an able hand behind the camera (the film won Best Picture at the Oscars), his acting is typically wooden and vain, and he is blatantly miscast as CIA operative Tony Mendez, a Mexican-American man. Affleck’s obtuse blandness is highlighted by the incredible calibre of the supporting cast, which includes Alan Arkin (in an Academy Award-nominated role), Bryan Cranston, Clea DuVall, Scoot McNairy, and the man himself, John Goodman.

As John Chambers, the delightful and eccentric Hollywood make-up artist, Goodman is flawless. He infuses a suspenseful film with humour, charisma, and magnetism. Alongside Arkin’s hilarious Lester Siegel, the pair function as the front for the fictional Hollywood studio created as a CIA cover for the rescue operation.

The two faultless actors are effortlessly mesmerising with their perfectly balanced chemistry and satirical take on Hollywood filmmaking. They also provide the necessary laughs to break up the white-knuckle tension being accumulated in the scenes set in Iran. 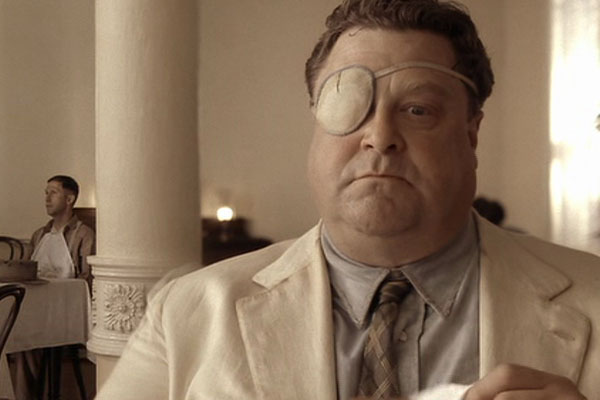 Along with his short-lived and compelling performance in “Inside Llewelyn Davis,” John Goodman turns in another scene-stealer as Big Dan Teague in “O, Brother, Where Art Thou?” The result is the mesmerising creation of a truly unforgettable side character by the Coens’ regular in their Deep South adventure road movie.

Depicting a typically larger-than-life persona as Big Dan, a characteristic that has become a staple in Goodman’s career performances, Goodman looms large as the eyepatch-wearing, eccentric personality that bellows out brash and lurid oddities. He is encountered by George Clooney’s lead, Everett, and Tim Blake Nelson’s Delmar around the midway point of the film as they try and locate their missing third associate, Pete, played by another Coen regular John Turturro.

“O, Brother, Where Art Thou?” is packed full of magnetic performances from its supporting actors, including Chris Thomas King as the musician who sold his soul to the devil and the unfortunate subject of racial hostility, Tommy Johnson; as well as Michael Badalucco as the psychotic bank robber, George Nelson; and Wayne Duvall as the dubious political candidate and Ku Klux Klan member, Homer Stokes. However, it is John Goodman’s gaudy, villainous character Big Dan Teague that is undoubtedly the most memorable of the exceptional bunch.

The abrasive Big Dan is only seen for a brief period in two scenes, but never fails to be a remarkable and impetuous individual as he bawls his way through each and every minute of screen time, causing nothing but problems for the film’s three hapless, bumbling heroes. He ultimately meets his fiery demise at a white supremacist gathering.