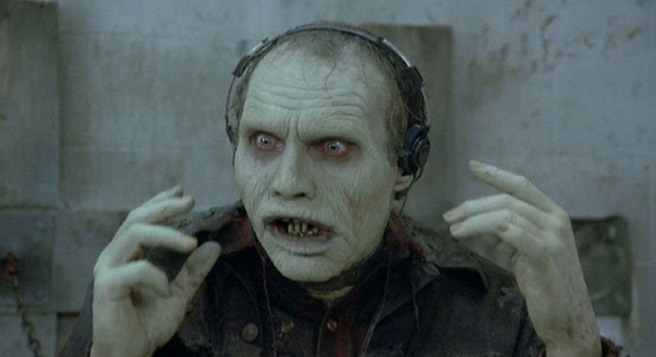 When you want to test the limits of the human mind regarding horror, macabre, and terror, you choose gory movies. The best of them will be on this list. But, be warned! The intrigue, scenes, and torture machines here are nothing you have ever seen before.

After “Once Upon a Time in Mexico” and “Sin City,” director Robert Rodriguez returns to the horror cinema’s attention with “Planet Terror”. The movie surprises yet another zombie scenario when the mad lieutenant played by Bruce Willis has the intention to steal a great dose of toxic gas which eventually ends up contaminating the citizens from the nearest town. Some of them will be dragged into the unnatural state of bloodthirsty psychopaths.

Between self-face shootings, zombie heads chopped by helicopter, zombies blown ups, eye stabbings, and other kinds of slaughter, the future remains still grim. The chance of a cure is lost forever, and the world becomes invaded by the blood-craving creatures.

The horror genre steps into the 20th century with an uncontrollable taste for revenge that easily slips away into madness and delusions. The dark and graphic French movie “Martyrs” explores the psychological depth of two girls that can only remember their childhood as an epitome of abuse soaked in screams and blood.

Lucie managed to escape from her oppressors at an early age, and after 15 years, her friend Anna helps her get revenge. Their quest ends up being a subversive experience that is difficult to watch even for the gory genre fans.

Unlike other horror movies, the audience is encouraged to identify themselves with the tremendously disturbed young Anna. Her actions are not a result of pleasure or adrenaline. After 15 years of repressed feelings, her whole being explodes into a violent madness that annihilates any traces of innocence in its path.

However, even though the girls have been lacerated in any thinkable way both physically and spiritually, the piece of resistance of the movie is a moment of humanity. Anna discovers a victim beneath a family home, who has her eyes obstructed by a metal strip nailed into her skull, and a body covered in appalling scars.

This character that lost her humane form is a sight to run away from, but Anna stays and helps her. This act of is as ground shaking as other scenes of torture, which reminds us that kindness can trigger feelings as deep as the ones created by terror.

“Evil Dead II” had become a cult favorite in 1987, when director Sami Raimi released the sequence for “The Evil Dead.” However, this time, the horror movie meets a parody version where the bad taste gets criticized, and the evil creatures drenched in blood are horrifying and amusing at the same time.

As in the “Re-Animator,” the series of zombies extend from just a complete human body to independent flesh parts such as hands and heads with demonic intentions. The plot resumes the story from the first movie when a young couple Linda and Ash discover a mysterious book of Death. The incantations summon a spirit from hell that starts messing up with life and death until it creates zombies.

Ash will eventually have to annihilate his own girlfriend who has been changed into a demonic creature that wants him dead. He ends up ripping her head off, but this way, from one zombie she is split into two.

The movie continues with grueling events, where blood splashes everything, guts fly in all directions, and other nauseating scenes are taking the audience by a red storm. However, the moments of pure cruelty are so exaggerated that they become a property of surrealism. They stop being terrifying and can be even viewed as hilarious as it can get.

A Takashi Miike movie will always test the morbidity edge of the human mind. This 2001 gory masterpiece builds up tension through murders, torture, rape, that will lead to an eventual collision of two violent spirits, Kakihara and Ichi.

Kakihara is a member of the Japanese mob Yakuza, who uses the pretext of a missing boss to inflict pain on almost any living being he meets. His desire for revenge is so devastating that ends up suspending a man from hooks pierced directly in his skin. The pleasure Kakihara feels as a sadomasochist trespasses any moral limit and creates torture devices that require a lot of nerve just to look at them.

Kakihara eventually meets Ichi the Killer whose behavior is half innocent, half bloodthirsty madman. Their devastating encounter will leave a room with as much blood as possible, along with dismembered arms and legs both on the floor and the ceiling. The director explains the lust for extreme torture that the two men live for as a result of a parental treatment which replaced the idyllic image of an innocent child with that of a ferocious pitbull.

“Lord of the Rings” may have marked the director Peter Jackson as a genius mind of the entertainment industry, but his past has actually solid roots in the horror genre. His “Dead Alive” production is a well-written funny yet bloody movie that revolves around the distressing relationship of a mother and son.

A good-will man Lionel is forced to return to his mother’s home and take care of her. Even though she is a combination of authority and violence, Lionel has her best interest at heart. The story degenerates quickly when the evil woman is infected with zombie germs by a Sumatran rat-monkey. The mother quickly dies only to return as a flesh-eating creature that infects others, be it dog, nurses, friends or neighbors.

The affected bodies change into a morbid memory of the human shape. The eyes get white, and the blood, bowels, and organs pop up out of the flesh carcasses to round up a perfect gory movie. Mountains of chopped body parts are invading the antique family house, while the hell unleashes in its all glory in front of poor Lionel.

“Dead Alive” still provides endless inspiration for movies in the gory genre with the unimagined before ways of body mutilations. Thus, it is no wonder that most of the budget was spent on an enormous quantity of fake blood.