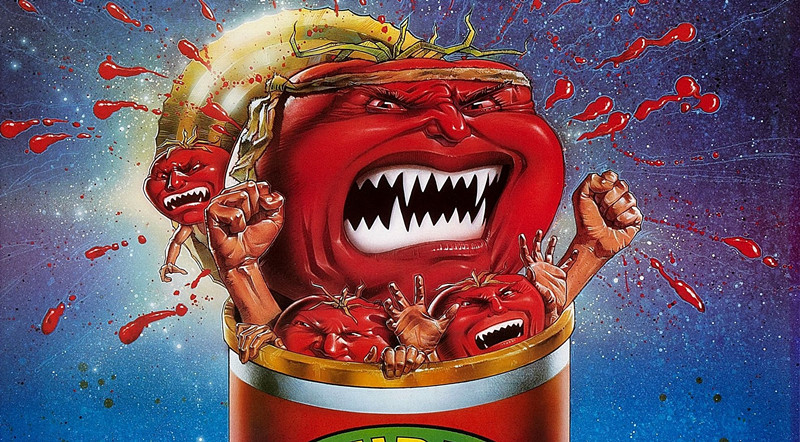 New from Arrow Video is the Blu-ray release of the sci-fi comedy film Return of the Killer Tomatoes. It is a true masterpiece of the ridiculous that is reminiscent of comedic elements from the likes of Monty Python, Mel Brooks, and the Zuckers.

The story takes place ten years after the original movie Attack of the Killer Tomatoes and the Great Tomato War, with the world living in fear and hatred of the dangerous red menace. The evil scientist Professor Gangreen (John Astin) has created a way to transform tomatoes into human form in order to build an army of shirtless muscle men that will wage war against mankind.

He also created a beautiful tomato girl named Tara (Karen Waldron) who escapes and falls in love with the pizza delivery man Chad Finletter (Anthony Starke). Aided by his best friend Matt (George Clooney), they must stop the professor and save the world. 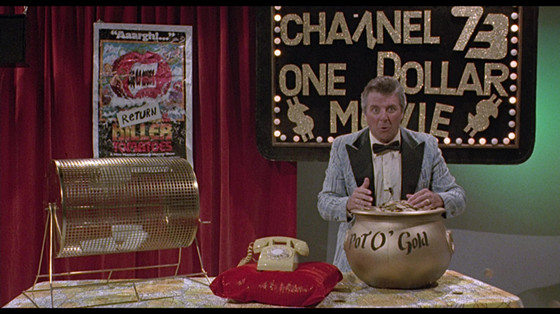 This picture was made with the goal of looking cheap and satirizing the horror and sci-fi genres, the media, corporate sponsorships, and the low budget film industry. It is a hilarious romp that is totally self aware that they are actors and a crew working on a bad movie.

It features some excellent sequences that include breaking the fourth wall, shutting down production because of funding, an argument with a member of SAG over paying actors because they spoke while on camera, and a series of product placement gags in order to get funding to finish the production. 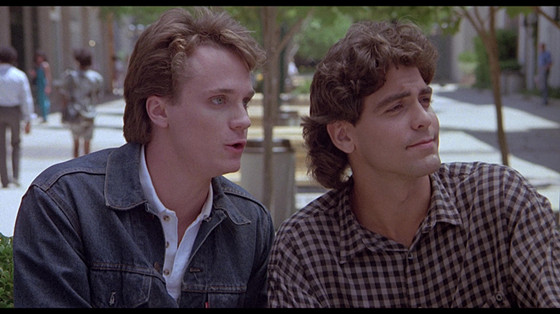 It’s a constant run of gags and one liners with some fantastic performances from the main actors. Clooney and Starke play off each other wonderfully as best friends; with Clooney performing his role more deadpan versus Starke being overly emotional and the least likely hero in cinema history. Astin is also splendid in his role as the mad scientist.

The other actor that is great is Steve Lundquist as Igor, the professor’s assistant who has aspirations of being a television reporter and drives a trash truck that is painted up like a news van.

There are really so many great gags and sequences in this that any fan of wacky comedies such as Airplane, Spaceballs, and Monty Python should get some real enjoyment out of this one. 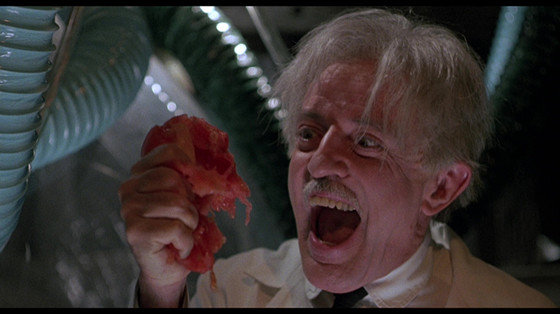 The quality and restoration is absolutely superb, using a 35mm interpositive element that was scanned in 2K resolution. The extras are somewhat minimal compared to other Arrow releases, with the main extra being a 16 minute interview with Anthony Starke who gives his thoughts on working with Clooney and his memories of the production.

There are also still production photos and the original trailer. The audio commentary is well worth spending time listening to and features the writer-director John De Bello covering various aspects about the film and the other Tomato’s pictures and cartoon series.

There is also a fully illustrated insert booklet that features an by film critic James Oliver, who once again provides a very insightful that serves as a terrific companion piece to the picture.

Despite the minimal extras, this is well worth the purchase for cult fans of this motion picture or the series and for viewers that haven’t seen it who are seeking out restored films from this era.