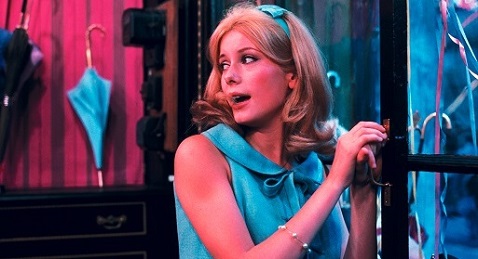 “Jacques Demy’s movies are soaringly lyrical and romantic, but they always have extremely sharp edges and undertones – often bittersweet, sometimes just bitter. The effect is stunning: Between the colour and the music, every place and every object seem to vibrate with emotion.”

I will wait for you

Living in the Pacific Northwest like I do, I’ve learned to love the rains that make my home so teeming, lush, and green. Earlier this week, for instance, I made sure to bring my umbrella with me as I ran errands.

Sure enough, after only walking a few blocks liquid sunshine fell in fat drops and before I knew it the words to “I Will Wait for You” came quietly to my mind and I couldn’t help but sing them. This has happened to me countless times since I first saw Jacques Demy’s mighty maudlin plea from 1964, Les Parapluis de Cherbourg back in my film school days in a basilica-like repertory cinema.

I’m not sure how many times I’ve seen The Umbrellas of Cherbourg, perhaps a dozen. It never fails to sweep me up in its generous heart, its dizzying kaleidoscope of colors, its all too true tragedy, and its bewitching, seductive song.

Responsible for much of the movie’s unassailable charm is the devastating Catherine Deneuve. Having already appeared in several films at that point, most notably in Roger Vadim’s And Satan Calls the Turns, it was Deneuve’s sixteen year-old Geneviève Emery––she was actually twenty at the time––that made her, rightly, a superstar.

Demy was wise to cast Deneuve, and like everything else with this film, his choices seemed sacrosanct in every way, for The Umbrellas of Cherbourg became a huge success the world over. And it was such a gamble for a multitude of reasons. For starters, the musical wasn’t the sort of thing audiences in postwar France were very interested in. Having been one of the key directors in the French New Wave, reinventing and remodelling cinematic conventions was certainly part of the draw Demy had in this prodigious project.

Nothing about Umbrellas is very typical of musicals from that time. In the first place, it was much like an operetta in that every single line of dialogue from every single character was sung. The day-to-day minutiae to the counted upon expressions of love writ large, this bold and curious experiment in sight and sound left a massive impression on the mass culture.

Another crucial factor in the film’s phenomenal ascendancy is its visual aesthetic. Demy, designer Bernard Evein, and cinematographer Jean Rabier’s stylized use of saturated pastels and primaries painted everywhere the eye might wander created one of cinema’s most romantic and responsive films, period.

A bold and bizarre experiment that could have so easily backfired, instead it maintains an emotional truth that echoes throughout the enfolding melodrama. Umbrellas dreamlike color spectrum––the exterior locations and interiors are equally as hued, sweeping, and bright––bolsters how believable the story is and the appropriate audience response is one of absolute awe.

Young lovers Geneviève and Guy (played perfectly by Nino Castelnuovo) have their whole lives ahead of them. Geneviève lives with her mother and helps her run an umbrella shop. Guy is a mechanic who lives with his ailing aunt. The year is 1957 and the two lovers have plans to marry. Guy is drafted to fight in the Algerian war, an event that will pull the two apart, perhaps indefinitely. It’s a simple story of love unfulfilled, told effectively in a three part structure. On paper it all sounds terribly pedestrian but the truth is anything but.

In keeping with the iconoclast nature of the Nouvelle Vague (incidentally, this was one of the first color films to come from the movement), Demy was sure to make many comments on the petit-bourgeois lifestyle, on social mores, class war, and, perhaps most significantly, this was the first film to address and question France’s involvement in Algeria.

It was a brave artistic uncertainty that won the Golden Palm at Cannes in 1964 and later brought Demy to America when the 38th Academy Awards bestowed four nominations his way. Typical of the Academy, whose history is one of short-sightedness and politically-based poor decision making, Umbrellas won no Oscars, not even for composer Michel Legrand, who truly deserved it for his mesmerizing contribution, an essential part of this ground breaking film.

There really isn’t another movie like The Umbrellas of Cherbourg, its singular in pretty much every way. The ending is about as un-Hollywood as you’ll get, especially in a musical. Its nighttime and snow is falling as characters we’ve come to treasure for a number of reasons––namely that they seem so real––have an uncomfortable exchange.

We identify, for we also have felt the pangs of love, of tragedy, of family, and of absolution, and we too have had awkward moments that were, somehow, inevitable. “I never thought I’d run into you, it’s pure chance,” Deneuve sings, with such conviction we can only concede and quietly cry. For her encounter has become ours, and so too, her heartache.