To truly and in earnest look upon Chinese cinema’s resurgence that, by the late 1980s was amassing some of the world’s most austere, original, and acclaimed works, one needs a modicum of societal understanding and historical context.

In 1976, with the death of Chairman Mao, the Cultural Revolution ended and the Beijing Film Academy reopened. When its first class graduated in 1982 the soon-to-be celebrated and justly lauded Fifth Generation of filmmakers (rather than take new students each year the state-run Academy waits for a single class to finish the multi-year curriculum before admitting the next colloquium) were on point to spur a cultural coup d’état that would forever fine tune and recapitulate Chinese cinema.

It was Zhang with whom I first associated this significant sea change manoeuvre, his early films with the glowing Gong Li, a nonpareil performer of elegance and intelligence, that pointed me towards a life of film study, aesthetic sense, and deep perception. 1991’s Raise the Red Lantern took me off guard, simultaneously alarming and exhilarating me in a lasting and indelible work of symmetry and pure polish.

“People have compared Gong Li and Zhang Yimou to Dietrich and von Sternberg, but for me the Chinese couple is even more impressively cryptic in their design and Raise the Red Lantern is their best. It feels like the history of a country, a culture and even a gender are all present in any randomly chosen frame of this serene and gorgeous poem.”

Based off of Si Tong’s seditious 1990 novel Wives and Concubines and admirably adapted by Ni Zhen, Raise the Red Lantern tells the nostalgic and nagging story of Songlian (Gong, in what may be her greatest role), a shining student and merchant’s daughter in 1920s China whose married off as a concubine to a wealthy old man by her desperate stepmother after her patriarch passes away.

As the “Fourth Mistress” in a well-heeled household Songlian is implicated right away in the infighting and domestic affairs of the women contesting for their Master’s amenity.

As a feminist parable, as a critique of Communist China (the contretemps of the June Fourth incident at Tiananmen Square had occurred the two years prior and Songlian’s suffocating student and cursed lot is an ominous corollary), and as a painfully pretty historical drama, Raise the Red Lantern casts a prodigious glow. 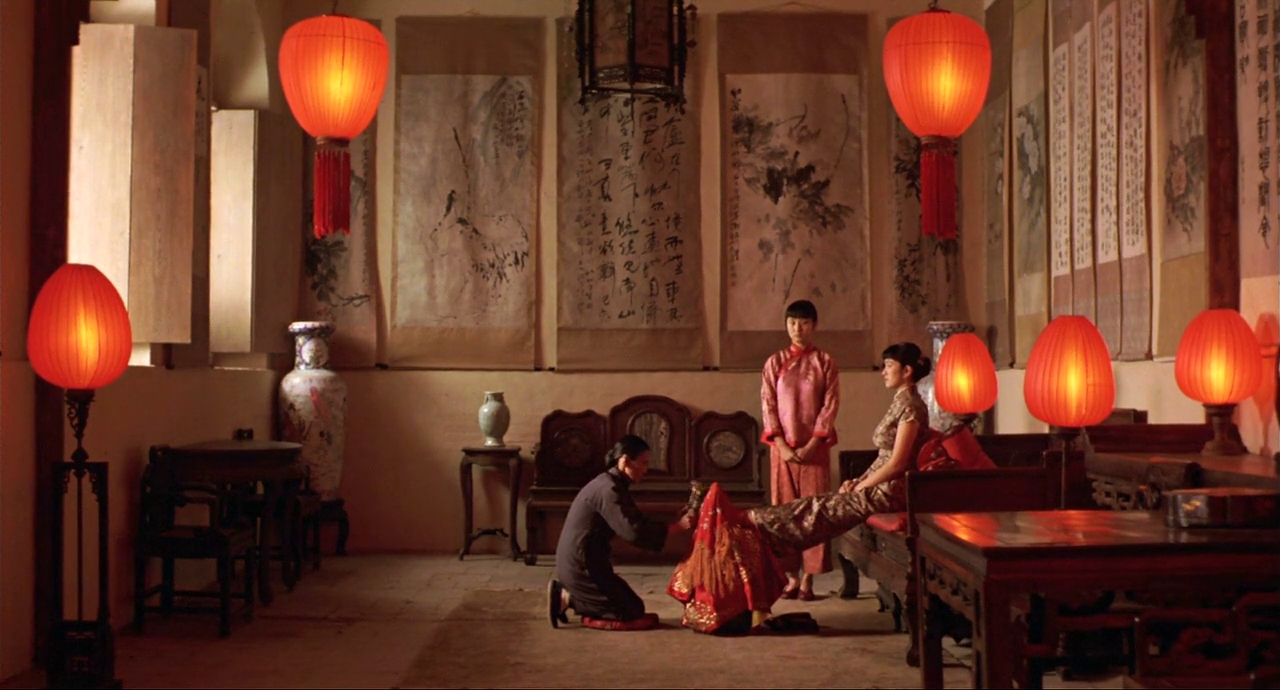 “Zhang Yimou has strenuously denied that Raise the Red Lantern, itself a violent tale of revolt and repression in the master’s house, was a vehicle of political critique… Sex and power, seized and stifled, are the intertwined subjects… The film’s tale of tit-for-tat machination among a wealthy man’s indentured wives determines its stylistic tussle between expression and restraint… ”

Filmed in three-strip Technicolor, a process long abandoned by Hollywood, which acquiesces a richness of reds and a luxuriance of yellows no longer achievable in American films, Zhang Yimou’s historical heart breaker somehow sidesteps maudlin sentimentality while still maximizing its titular crimson blush. One could argue that the flushed palette matters as much as Songlian does to this wintery tale.

The glowing reds (the near faceless Master Chen lights a red lantern at the door of the concubine most in his favour and whom he will bed that night), the tenuous yellows, and the half-light sunset grays inundate and overpower the viewer. How could they not? These effusive, delineative colours beguile and enchant, while the odd, almost anomalous evenness and stillness of the compositions—a parade of perfectly composed frames—stress the confined and shackled mores of a foul feudal culture in need of annihilation.

“If Gong’s character is trapped in a social prison, we are trapped with her; and every visual choice reinforces this. For all its fascinating intrigues, Raise the Red Lantern is one of the most oppressive great movies ever made.” 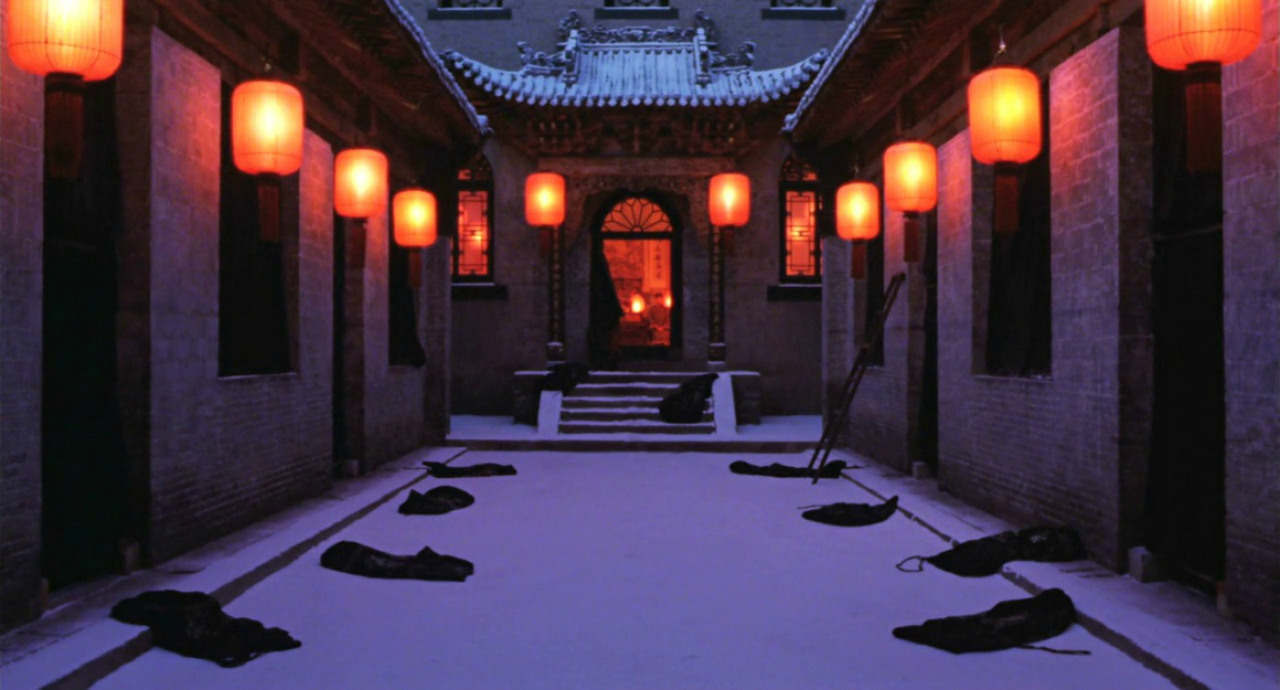 Gong Li’s Songlian is a desolate delineation of womanhood. Her scholarly pursuits once held promise and powder, now under Master Chen’s tenure she is reduced to a small enclosure, despite being granted a maid (a brilliantly understated Kong Lin) and well-appointed surroundings, she is trapped, her potential never to be substantiated.

As Songlian struggles to keep ahead of her adversaries, the three other wives, alliances and estrangements materialize and migrate as archaic traditions scourge all parties and their fractured and fragmented household mirrors the civil society from which the film arose.

This social commentary and the audacious use of dutiful reds resulted in China’s banning of the film, initially (it was also banned in Taiwan for a short period). But so impressive and eloquent was the film internationally (it was lavished in awards including the BAFTA for Best Foreign Film and the Silver Lion at the Venice Film Festival, among others) that its expulsion was short-lived and its legacy beyond doubt.

“There is a sense in which Raise the Red Lantern exists solely for the eyes. Entirely apart from the plot, there is the sensuous pleasure of the architecture, the fabrics, the colour contrasts, the faces of the actresses. But beneath the beauty is the cruel reality of this life, just as beneath the comfort of the rich man’s house is the sin of slavery.”

Visually dazzling and emotionally distant, Zhang’s magnum opus (perhaps only overshadowed by his visceral yet emotionally vacant wuxia wonder Hero from 2002) is one long list of pushes and pulls, a precisely patterned war of attrition that is impossible to leave behind. Raise the Red Lantern is a lawful and lionhearted classic, a level best for all involved, whose loose glimmer will never lower or remove.