Having seen most of the recent Russian war dramas such as Stalingrad and The Admiral, I can proudly say that this an absolutely brilliant biopic that is easily comparable to the other great war films that have been coming out of Russia in the past ten years or so. This is brought to you by Arrow Films for distribution in region 2 format, making it available to viewers from Europe, Middle East, Japan, South Africa, several other countries, and anyone that may own a region free player.

The title may be a little misleading because it does not deal specifically with that battle, which ends up only being a portion of the movie towards the end as the Russians have retreated from German forces. Instead this is a biopic about the most famous female sniper in military history, Lyudmila Pavlichenko, who had a reported 309 confirmed kills.

It follows her from the time before she went to war, going through training, fighting in the Battle of Odessa, the defense of Sevastopol, and her United States tour campaigning for American support where she meets and strikes up a friendship with Eleanor Roosevelt. There is a romance triangle involving her and three men that are in love with her and the story goes back and forth in time with Roosevelt serving as the narrator. 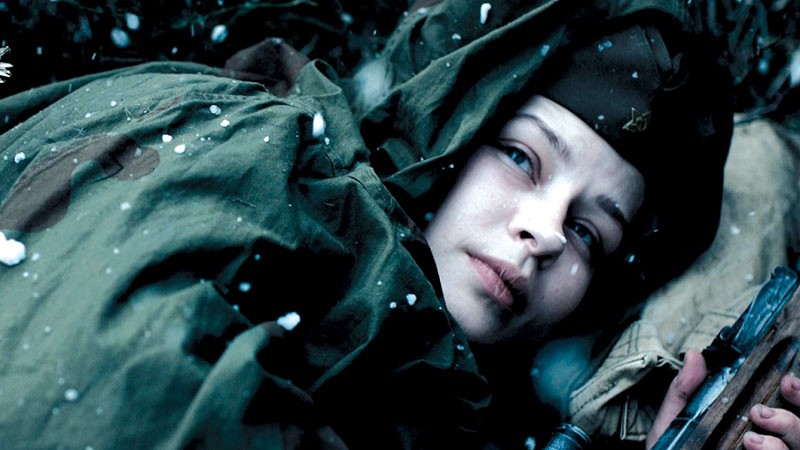 The direction and cinematography is excellent with imagery that is both beautiful and yet destructive because of the war time settings. The effects are huge with superb battle sequences, lots of violence and bloodshed and a simply stunning battle sequence that involves multiple Russian boats being attacked by German airplanes. There are several montages and a climactic explosion that have pop Russian songs playing to them, which you may either enjoy or dislike.

The romance subplot is also something that you are either going to find distracting or that it builds up what she goes through as a woman and a soldier.

The performances are very good, especially the lead actress Yuliya Peresild who gives an absolutely stunning performance as we witness her enduring so much. She ended up winning a Golden Eagle Award for Best Actress. The motion picture also won for best cinematography and was nominated for Best Film, Best Director, Best Actor for Evgeniy Tsyganov, and Best Art Direction.

I cannot say how historically accurate the depiction of Pavlichenko and the events are in the film compare to what happened, but it is still a highly entertaining war drama. It is also one of the few from the genre that feature a woman as the main character.

Fans of any of the recent Russian war pictures, or fans of the genre in general would definitely be interested in purchasing the DVD and checking this one out.