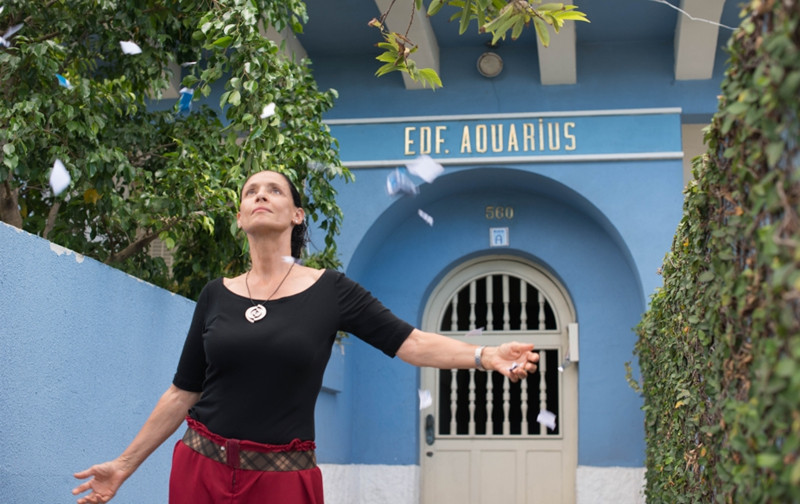 It’s astonishing that Aquarius is only Kleber Mendonça Filho’s second feature, for it attests a true genius. This honest, mosaic-like drama from Brazil appears, on the surface, to be a rhetoric-addled prescription for maudlin sentimentality as we get to know Dona Clara (Sônia Braga), a retired music writer in her mid-60s who outrightly refuses a buy-out from real estate developers after her Art Deco residence.

The building Clara lives in is the titular “Aquarius” and it’s where Clara has lived for some thirty years––the film opens in the 1980s and establishes her bond to the building––and it’s evident pretty quickly that Filho’s able to elude clichéd platitudes in large part due to Braga’s brilliant portrayal.

Enough simply cannot be said about Braga’s unflinching feat of strength as Clara, easily and without a doubt one of the most astonishing performances of 2016. As we learn of her past wherein she overcame breast cancer, raised her children, loved and lost her husband, and all the while maintaining and nourishing her love for music we can’t help but respect and revere her for her tenacity and allure. Braga embodies all of this with an almost mythic fire.

While we can easily foresee that the real estate developers are devils who engage in various subtle and express harassment, Clara’s reactions alternately fascinate, frustrate, and excite.

Much of Aquarius feels in the tradition of auteurs of women’s films like Antonioni and Bergman, but also the soupçon subtlety of Edward Yang is tangible too, particularly in the ways these authentic characters cope with crises and emotional regress.

As the story threads interweave and a weightier perspective looms––the cultural divide and enmity in Brazil is brazenly shown––a warm intricacy appears. From fragile cool to pitiless intensity, Aquarius is a cerebral and sensual masterpiece.