There’s an old joke actors will hear should they suffer from a mishap on the job that produces pain: “Use it.” The idea behind the joke is that a performer should tap into the physical trauma to provide energy to the requirements of an upcoming scene.

But when actors and directors clash on a set, the joke might not seem funny anymore. And yet, the joke oftentimes proves true as some stunning sequences have come of some of the most legendary behind-the-camera conflicts, even taken to the moment the camera rolls.

While no actor should feel they need to pushed to extremes to do their job, there are instances when the results create a final product so memorable, one needs wonder if it wasn’t all worth it.

Below are eight such examples from film history, and the particular scenes where the real-life pain directors have caused their actors are obviously being used to great effect. 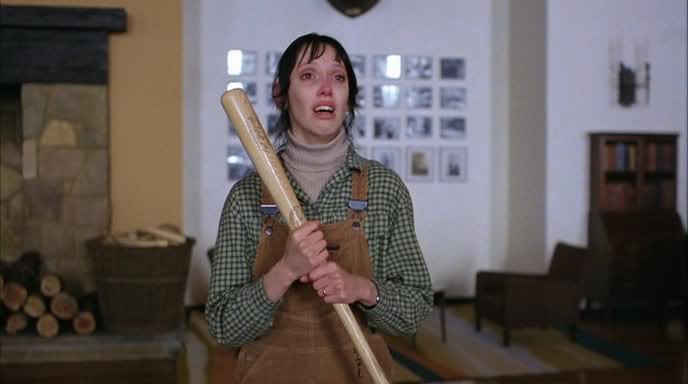 In a genre full of so-called “scream queens,” it’s rare in a horror movie to find a particularly moving female victim who isn’t much more than a lamb being led to slaughter. In The Shining, Duval’s character Wendy Torrance is snowbound in a haunted hotel she and her abusive husband Jack are watching for the winter.

As the damned spirits drive Jack towards a murder spree against his family, the frail and weak-seeming Wendy struggles to maintain her sanity and protect herself and her young son.

What was happening off screen was just as terrifying. Kubrick, ever the infamously demanding director, spent the entire production – which ran for an excruciating 500 days – making Duvall’s life a living hell. On a daily basis, he would harangue her for her alleged inability to act and can even be seen in documentary footage of the production verbally abusing her to the point of madness.

Duvall has stated that she spent the better part of six months unable to sleep, and her hair even began to fall out. Watching the film, one can literally see the actress falling apart.

But the famous scene where Wendy sheepishly defends herself from an assault by Jack with a baseball bat is really her most shining moment in the film. As he menaces her up a long flight of stairs and she meekly waves the bat at him, you would think a makeup genius was responsible for her impossibly harrowed look.

The truth is, Kubrick forced Duvall to do no less than 127 takes of the scene – a certified Guinness Book World Record for film. It’s a moment where the audience not only feels the greatest empathy for Wendy Torrance, but ultimately discover the reaches of her despair as well as her courage.

It’s a stunning sequence where she actually out-acts Jack Nicholson’s legendary performance as the film’s antagonist. Without Shelley Duvall’s perseverance, The Shining may well have featured a female victim, who like so many others, could have been nothing more than a prop.

Duvall converts Wendy’s victimhood into an unromantic heroine, one we can totally believe as her triumph doesn’t come with a Hollywood bang, but with a threadbare victory and escape. 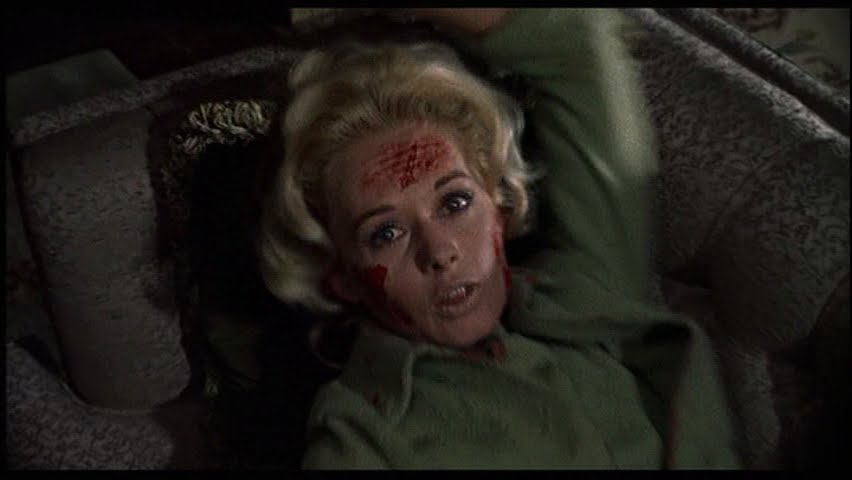 Sir Alfred Hitchcock was not only a well-regarded filmmaker, he also had a reputation as a misogynistic letch with an unhealthy obsession for blondes. Had he directed The Birds in the modern era, his treatment of Tippi Hedren would almost surely have produced some very negative publicity. But in those days, powerful men could misbehave with great impunity.

Tippi Hedren has likened her experience with Hitchcock to being trapped “in a mental prison.” He became her stalker, making unwanted advances and controlling her career with a contract that locker her in for years. The Birds was an odd horror film for Hitchcock, with a premise of flocks of wild birds suddenly becoming homicidal for reasons unknown in a sleepy coastal California town.

The film famously has no soundtrack, using the birds’ terrifying squawks as sound design instead. Amazingly, despite her behind-the-scenes trouble, Hedren spends most of the film portraying a cool, level-headed heroine keeping control not only of her own safety, but that of children under attack. Such resolve is a testament to her fortitude, but in one scene, that all fell apart and it showed.

The climax of the film has Hedren’s character trapped in a room with dozens of birds swarming her and cutting her to pieces. Hitchcock and the whole production had lied to Tippi and told her the scene would employ mechanical birds.

Instead, real crows and gulls were thrown into the box-like set, some even tied to her by thin wires. This went on for a full week, with birds pecking at her, scratching her, slicing into her flesh. And the whole time, the dejected director seemed to be taking out his frustrations on the helpless actress.

Finally, after days of this trauma, Hedren collapsed from exhaustion and possibly even temporary madness. Doctors ordered her to rest over the vociferous objections of Hitchcock.

Watching this scene in The Birds, one can feel the physical and emotional pain Tippi was put through by a man who was basically bullying her for rejecting his advances. But she did get through it, she gave the audience her escalated pain, and it proves to be one of the most hard-to-watch horror sequences in film history.

Side note: Hitchcock continued to sabotage Hedren’s career well after working with her for two films, blocking her opportunities to take on other projects by refusing to release her from her contract. In that sense, the director was the last bird to attack the stunning actress, who basically retired from her craft thereafter.

Many consider Coppola’s Apocalypse Now to be his magnum opus. The excruciatingly long production suffered not only from a series of misfortunes, but also from a culture of excess, something the director consciously fostered in order to reflect the conditions of the film’s setting, the misguided and mismanaged Vietnam War.

Bloated budgets, rampant drug abuse, gigantic sets, and even collusion with the corrupt leader of the Philippines, Ferdinand Marcos, were all part of the production’s flirtation with the extremism which Coppola wanted the milieu to be infused with.

Martin Sheen, the film’s lead actor, was experiencing a particularly tough time. Struggling with alcoholism, marriage troubles and other personal issues, Sheen often clashed with the director, one time even physically attacking him. Things got so bad at one point that the actor suffered a heart attack on set. And yet Coppola tried to use all this pain to bring out the best portrayal of the story’s protagonist: a special operations officer conflicted with his mission to assassinate an American officer.

The strain of the war tore the character apart just as the strain of the production wore the cast and crew down. In no other scene do we see Sheen pushed to the edge so far as in the famous mirror sequence where the drunken soldier gets into a conflict with his own reflection.

Drunk in real life, Sheen’s performance is that of a man engaged in a bitter fight against self-loathing and a self-destructive drive. Behind the scenes footage reveals Coppola shouting cues from the actor’s personal life meant to fuel his own inner rage and bring it to bear for the screen.

Finally, Sheen improvises by smashing his fist into the mirror, braking the glass and deeply cutting himself, bleeding all over the sequence. Insisting that the cameras keep rolling, the actor refused medical assistance and delivered perhaps one of the most authentic collapses of ego ever witnessed in a fictional film.

Entrancing and beguiling, his performance was edited like a ballet hard set against hellish landscapes set ablaze with napalm bombs and wonton destruction. It may be that at that moment, Sheen’s own soul had been ground to dust, and the cameras were just there to capture its last gasp before collapse.

Not every tale of great performances happens in dark films covering mankind’s darkest moments. Sometimes even a light comedy can produce a hilarious performance from on-set friction. Such was the case with Sydney Pollack’s Tootsie, the gender-bending movie where Dustin Hoffman plays an out of work actor who dresses in drag to score a TV role.

Hoffman is a consummate method actor in real life, and is known for driving his directors crazy. Pollack at this point had largely switched to acting himself, and had to be goaded into taking the helm of the project by an insistent Hoffman. Almost immediately, the director regretted the decision.

Obsessed with “getting scenes right,” the famous actor constantly argued with Pollack over almost every moment in the film. While their clashes were not as hateful or violent as others described here, the tension nonetheless fueled a sort of perfectionist détente with both agreeing that final compromises made the movie better.

Pollack also had a role in the film, playing Hoffman’s agent who, of course, often fights with his troublesome actor client. The two don’t share a lot of screen time in the film, but one memorable sequence seemed to be the epitome of the fruits of the collaboration.

After having won the TV role, Hoffman’s character ambushes the agent played by Pollack at a fancy restaurant, pretending to be the lady he’s just sold himself as. At first, the agent is perplexed by this strange woman, but when Hoffman’s character reveals his true identity, the fun really begins.

Trapped in a moment and forced to weigh the possible benefits of what’s happened, the two actors play off against each other as simultaneous partners and enemies. It’s a playful scene that has a lot more energy than it should due to the simmering tensions Hoffman and Pollack were engaged in.