For a film to be a great accomplishment, vision is required. Also, the transposition of vision to an artistic form must be adequate. Nicolas Winding Refn succeeds in both aspects in his “The Neon Demon”. The film follows a teenage model on the rise in the world of fashion. The idea is nothing new, it has been used numerous times, but what truly is new is the film’s aspiration to transcend that simple and overused storyline.

This is not simply a story about the fashion world; its implications are much broader and overreaching. Some may call the film “feminist” or “postmodern”, and in a way it is both. Nevertheless, it is also a harsh critique of Western societies and of postmodern man.

It can be compared to Michelangelo Antonioni’s “Blow-Up”, where the world of fashion is just a starting point to deal with broader subjects. Of course, Antonioni’s genius is hard to match, but Refn does not really try to do anything similar as far as artistic imagination is concerned. His approach may be hard to digest, and some may be insulted by his directness, but it is a movie that treats a common subject in an authentic and creative way.

This film has received mixed reviews so far, and these kinds of films are particularly interesting because they provoke radically different emotions and attitudes. In this article, seven reasons will be presented why “The Neon Demon” is a great accomplishment.

1. Depicts a ravaging desire to be seen

Visual tropes and symbols appear throughout the film, and the most vivid moment is at the end of the movie when a model vomits the eye of a protagonist. The symbolism lies in the fact that most of the characters have a strong desire to be seen and acknowledged by others. The same can be told about many people in our societies.

The concept of scopophilia means: “taking other people as objects, subjecting them to a controlling and curious gaze.” It is often practiced by various characters in the film toward Jesse. When she is subjected to this, it seems as if it is an attempt to influence her will and even break it.

During the conversation with the amateur photographer, beneath the Los Angeles sky, Jesse says: “When I was a kid, I would sneak out to the roof at night; I thought the moon looked like a big round eye. And I would look up and I’d say, “Do you see me?”. When she was little, she had a strong desire to be seen, and in her next lines she says that she wondered what she would become.

When a person acquires a higher social status, their potential to be acknowledged and recognized rises as well. Thus, her motivation is not solely “making money off beauty”. The fundamental desire of postmodern man is at stake; if you are not seen and recognized, you account for little. In one scene, the camera focuses solely on Jesse’s eye. What the other person sees is but a projection, but in the world of “The Neon Demon” illusion is everything; “beauty is the only thing,” as the fashion creator says.

2. Maturity is unachievable for characters 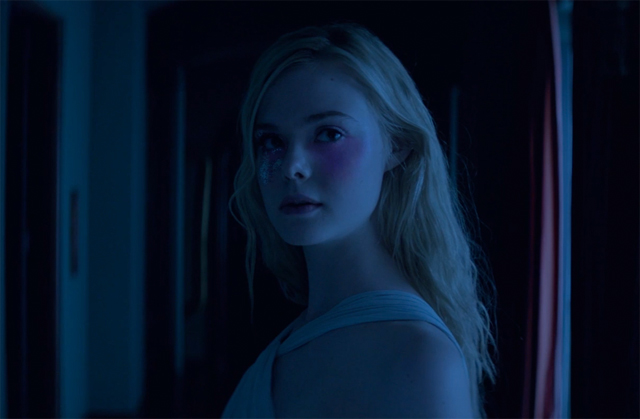 Jacques Lacan believed that a subject obtains psychological maturity through the observer’s gaze, his projection of himself on other objects; a mirror, for example.

It is often shown that characters look in the mirror, seeing their projection. It implies that their level of maturity is at a low, and they obsessively try to preserve it. They want to be seen by others, but they also want to see themselves as mature individuals.

To the viewer, it may seem Sisyphean. According to Lacan, even animals cannot reach maturity unless they are able to identify with other beings of the same species. When Jesse says “they want to be me,” what she is saying is that she is a point of reference when it comes to identification with others.

In a memorable scene when Jesse walks on the catwalk, she is shown looking at mirrors, observing herself and then kissing her own projection. She behaves like Narcissus who fell in love with his image in the lake. It is important to highlight that both of them are not “in love” with their “true self” but with an image, a projection.

Narcissism feeds on illusions and it is interesting that after those scenes her behavior changes. She becomes more confident, but “hubris” also emerges. Refn wants to symbolically portray her change, not gradually, but with only one scene. It is an interesting and lucrative approach.

Through images, he portrays what words can convey with less power. Another example is Sarah, who breaks the mirror in the bathroom. This act conveys the state of her ego; her image of herself is destroyed with Jesse’s success. Now, her projection of herself is distorted. The picture on the floor is also torn into shreds. She cannot obtain maturity because her ego is falling apart.

3. Beauty is devoured – allegory of modernity 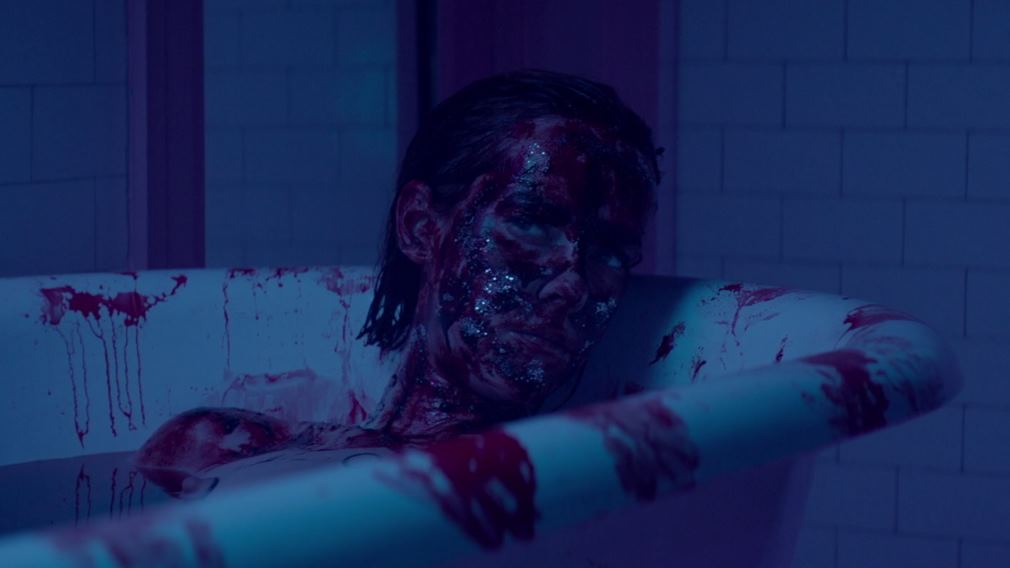 In Jesse’s room, a wild cat appears, and later in the film, there is a stuffed leopard in the mansion. This anticipates Jesse’s being devoured. In “Fellini-Satyricon”, a ex-poet is eaten for profit. This materialistic component is present here as well, but in a different manner.

In this film, a symbol of pure beauty is eaten and destroyed. This is an allegory of our own cultural practices and the way the fashion world affects the models psychologically. Her devourment is also a symbol of the destruction of individuality. Her beauty was authentic; she was “a diamond in a sea of glass.” Those who feel the inferiority complex, as defined by psychoanalyst Alfred Adler, may try various things to destroy individuality of someone they envy.

Eating a human being is a radical approach; Refn chooses precisely that to highlight the horror of destruction of the unique. One interpretation could suggest that in the modern world, there is no place for what is natural and authentic.

The world is manufactured, distorted, and turned ugly by an environment similar to the one in Antonioni’s “Red Desert”. Cannibalism is the final indignity that can be done to a person. Someone who does that strips away the human characteristics of a victim; he or she does not get a chance for dignity in death.