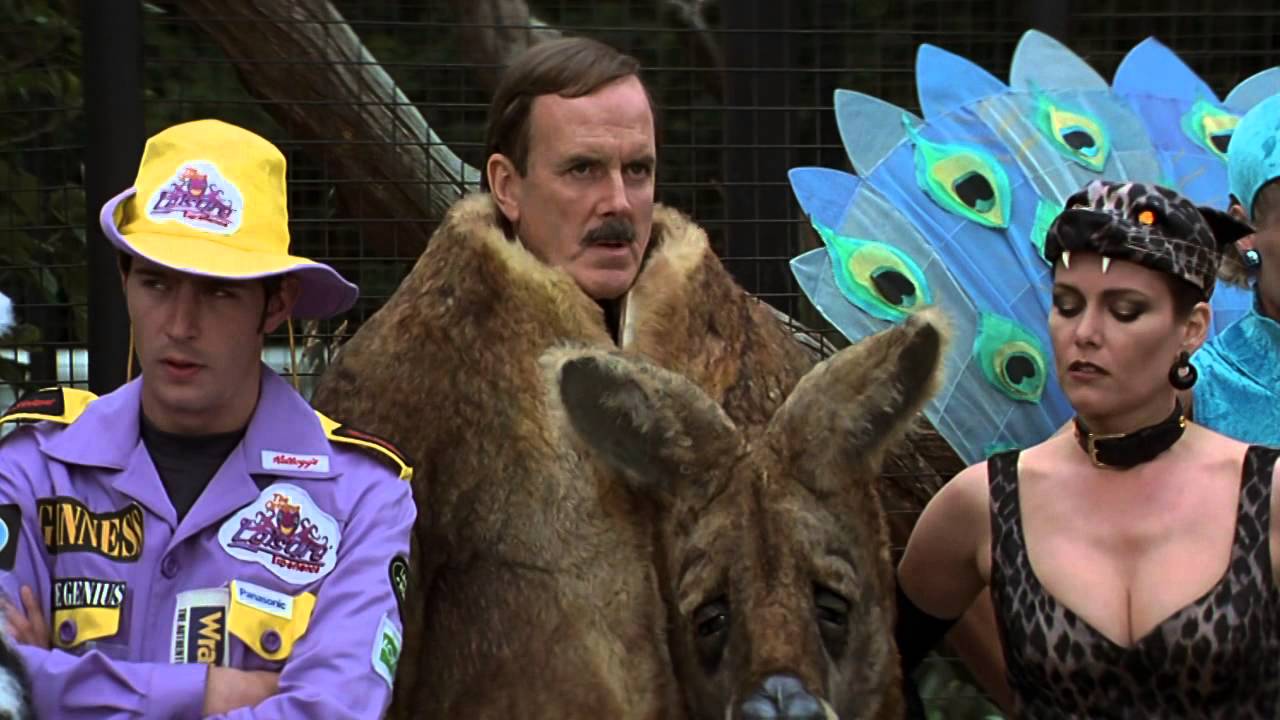 ‘Fierce Creatures’ is an unofficial sequel to the classic comedy ‘A Fish Called Wanda’ (1988), it shares many of the main cast with John Cleese, Jamie Lee Curtis, Kevin Kline and Michael Palin coming together for the first time on screen since ‘Wanda’.

Whilst it’s not the classic ‘Wanda’ was it’s definitely a great comedy with some amazing characters and hilarious scenes. Kline absolutely steals the show as Australian Murdochesque tycoon ‘Rod McCain’ (he also plays his son ‘Vincent’) who has acquired a quaint Zoo with plenty of cute animals, he wants to market the zoo with only dangerous animals in residence so brings in Cleese’s ‘Rollo Lee’ to manage this transformation, Cleese here is a lot more wired than in ‘Wanda’ and takes more cues from his ‘Basil Fawlty’ character, making the insane choice to execute the cuter animals to get rid of them.

Curtis plays eye candy ‘Willa Weston’ and is as enjoyable as ever, the cast is rounded out by some really enjoyable characters in the zookeepers who rail against the new regime. It’s a tremendously enjoyable film throughout with a very good script, it all gets pretty manic as it progresses and the story excels through its characters. Perfect for a double bill with ‘Wanda’. 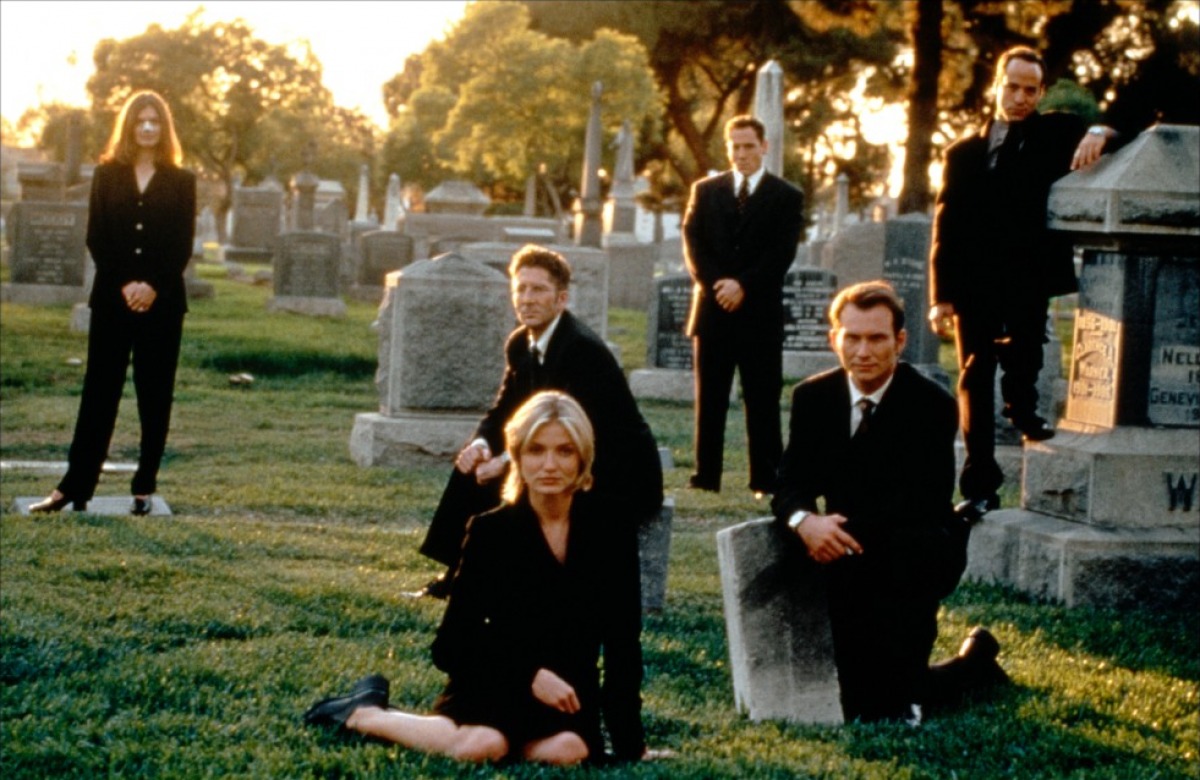 ‘Very Bad Things’ is in short a very black comedy, if you put your morals aside you’re in for quite a ride. The film starts with a flashback to a stag night that’s gets way out of hand, with the death of a stripper and a security guard and their subsequent dismemberment and desert burial and from there it just gets worse.

It’s got a great high profile cast with Christian Slater, Cameron Diaz, Jeremy Piven, Jon Faverau and Daniel Stern. The comedy of the movie comes from its many hysterical and pretty violent scenes, after the stag incident the characters begin to crack under the paranoia that someone is going to sell them out and get them caught.

Slater takes the psycho crown as he begins to take charge of the situation in the way on Slater can, he’s definitely been cast in this role before but that’s a good thing here. The other standouts here are Stern who takes paranoia to a new level and Diaz who get’s to go darker than she had before in that point of her career.

The film takes comedy to pretty crazy places and its not going to be for everyone, critically, a lot of people hated it on release as it was too dark and mean spirited but that’s what it sets out to be and if you can find the comedy in this narrative then this will become a staple in your regular film cycle. 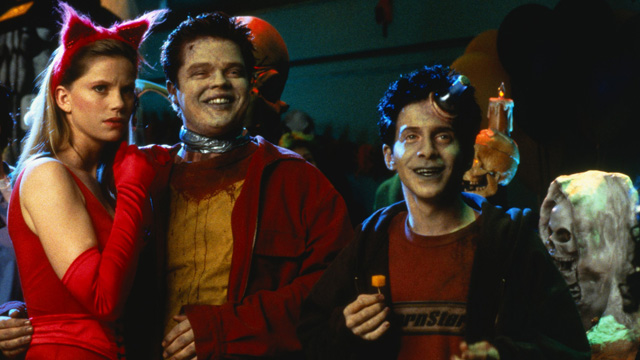 ‘Idle Hands’, a stoner comedy horror, spoofing on other horrors, some those also comedy (‘Evil Dead 2’ (1987)) is a great deal of fun. It never takes itself too seriously, it has decent effects and a very good young cast, which bring a lot of heart (and smoke) to the film.

It riffs on the adage of the “devil makes work for idle hands”, none are more idle than ‘Anton’s’, (Devon Sawa), the ultimate stoner layabout who even fails to realise he’s killed his parents for a concerning length of time. His right hand has become possessed by the devil and wreaks a path of comical destruction throughout the film. He kills his two best friends ‘Mick’ (Seth Green) and ‘Pnub’ (Elden Henson) who come back in the form of a living dead comedy duo because Hell was just too far.

Support comes from Jessica Alba and Vivica A Fox among others and not forgetting ‘Anton’s’ hand, which once cut off, really goes on the rampage as an autonomous character, even scalping Dexter Fletcher of ‘The Offspring’. It’s a different take on the turn of the millennium teen comedy and represents the counter culture at the time with a video for Rob Zombie’s ‘Dragula’ playing in one scene and a soundtrack featuring Blink-182 and The Vandals.

The story is good if not a little disjointed, Alba is good as ‘Anton’s’ love interest and it would have been nice to get a bit more depth from Fox’s demon hunter role, she does get the funniest line though “Well, my work here is done. Time for the ritualistic sex”. It’s nothing but perfectly enjoyable Halloween comedy. 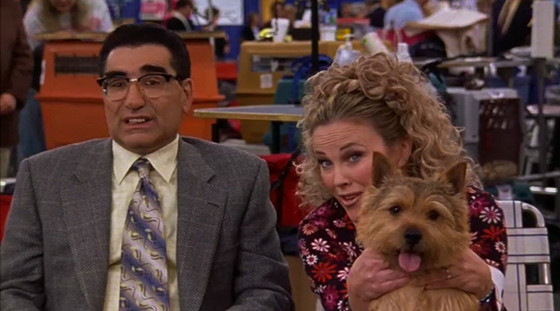 ‘Best In Show’ is the second Christopher Guest movie on this list and its just as fantastic as the first. Again, it’s styled as a mockumentary and is a satire about dog shows and the characters that take part in them. Starring the usual Christopher Guest ‘Second City’ regulars.

It’s a film of almost constant laughs using improv’ to amazing effect. The characters are all fantastic with stand out performances from Catherine O’Hara, Eugene Levy and Fred Willard.

The action is set at a Philadelphia ‘Crufts’ like dog show and follows several dog trainers/owners, showcasing their quirks and the lengths they will go to to win. A couple of characters are slightly annoying but it’s subtle, intelligent approach to satirising it’s subject wins through completely. The dogs themselves get enough of the spotlight to be equal stars and the film is all the better for it. Guest fans will find familiarity in this and he shows his winning formula is still successful. 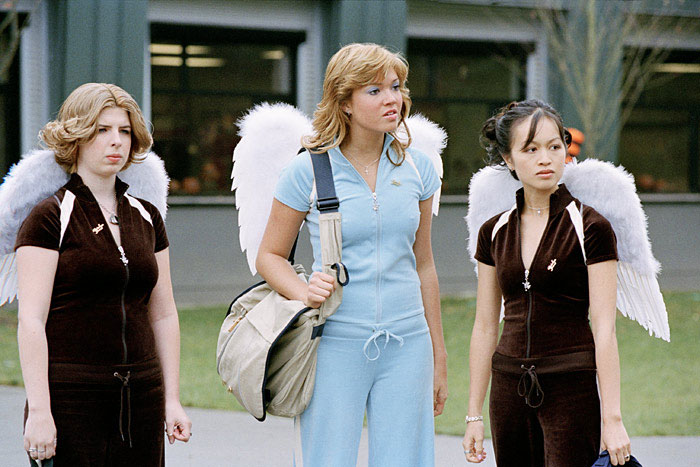 In an inspired scene, she hits her head in the pool and has a vision of Christ telling her to do everything she can to help him, after advice from her friend ‘Hilary’ (Mandy Moore) with a spiritual solution for all problems she decides to sacrifice her virginity to ‘save’ ‘Dean’ and turn him heterosexual. After finding pornography in his room ‘Dean’s’ parents pack him off to a Christian ‘treatment centre’. To make things more complicated ‘Mary’ realises she is pregnant.

The film has a very smart script and an excellent young cast, Macaulay Culkin is criminally underused as ‘Hilary’s’ brother but there are plenty of very funny scenes throughout to entertain. It deals with some difficult issues for teens in a refreshing way and has a surprising take on the acceptance and values that can be found in Christianity, just not in the way you think the film is going to pitch it from its outset.

It’s an outsider comedy about outsiders, even in their own faith, and its one of the freshest, smartest comedies in years. 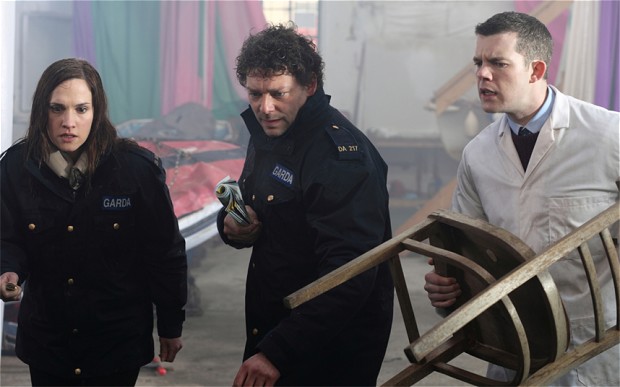 ‘Grabbers’ is a sci-fi comedy with a nice twist, some decent cgi for the budget and some great laughs. It’s got a feel of a Corman B-Movie with the setting and comedy of an Edgar Wright film, it has some roots in ‘Tremors’ (1990) and ‘Lake Placid’ (1999) but for all that it’s definitely got its own soul.

A meteorite crashes off the coast of an Irish island and the locals start becoming prey for tentacled alien creatures known as ‘Grabbers’, after a local, perpetually drunk, cop is attacked the ‘Grabber’ dies and the locals quickly realise the only thing that puts these creatures off their lunch is a high alcohol content, thus there’s only one tactic and that is to get very drunk.

The script is fun, the leads are very likeable, and there’s plenty of likeable Irish support characters, the central barroom scene is particularly good, the creatures themselves, although not greatly detailed in terms of visuals, definitely transcend expectations.

All round, it’s a surprisingly well-made creature feature that you will enjoy immensely on a Saturday night with a few drinks. Turn your brain off and pair it up with ‘Deep Rising’ (1998) or ‘Tremors’. 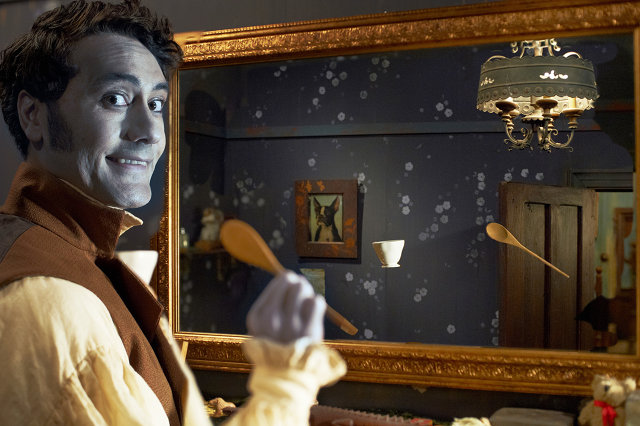 ‘What We Do In The Shadows’ showcases the great talent New Zealand have for horror comedy, as funny as it is gruesome and on par with the great kiwi comedy horror of recent years ‘Housebound’ (2014) . As with the two Chrisopher Guest movies on this list and like the legendary ‘This Is Spinal Tap’ (1984) it uses the mockumentary format incredibly well.

The film is really well executed by co-directors/writers/stars Jermaine Clement (Flight Of The Conchords (2007) co-creator) and Taika Waititi, the jokes and set pieces are all brilliantly timed and well acted.

The plot is sparse and relies more on the characters and their weird quirks, it’s a fly-on-the-wall look at the daily lives of a group of vampire room-mates. They aren’t ‘Twilight’ types but hundreds of years old beings out of touch with modern life and struggling to fit in to a society they want to be a part of but also prey on. It plays with vampire tropes and myths well and the ensemble cast pretty much play out a master class in comedy; they dress bad, they can’t cope domestically, they argue and fight, all human flaws but they remain convincingly inhuman.

Films like this never get the focus or attention at release they deserve but in 20 years we should be looking back on this as fondly as we do Peter Jackson’s early horror comedies.