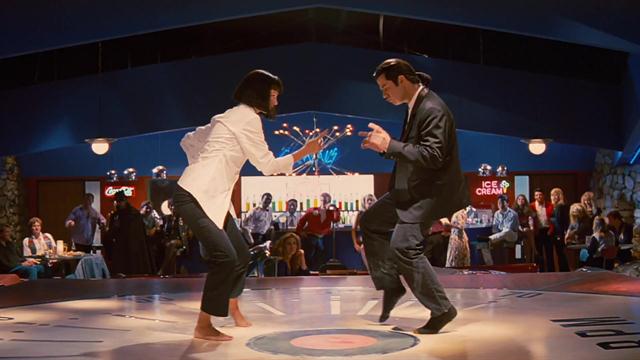 Sometimes a song used within a film fits so perfectly that it would be criminal to imagine the scene it’s used in without it, whilst at the same time, a song can instantly remind a person of that very scene. The memorable songs played in films, whether serving as simple backing music or more directly infused within a scene can also have a direct and fundamental influence on a person’s overall musical taste.

A talented director and their carefully selected sound department’s record choices can serve as a great inspiration, educating audiences in certain genres of music that may have previously been unknown to them, in turn, opening up doors to a wider selection of music a person may consider themselves to be a fan of.

Regardless of genre or decade, whether it’s a selection of new music, remastered workings, original songs, or the use of older songs that serve to teach younger audiences of the wonders of era-defining tracks, the close link between cinema and music has always been present, as the chosen music on a soundtrack serves to mould and influence the style and mood of a film, whilst also expertly crafting a remarkable soundtrack that can quite often be as cherished as its partnering film itself.

This list does not take into consideration, instrumental scores (sorry John Williams, Hans Zimmer, James Horner and Ennio Morricone), nor does it make allowance for the inclusion of musicals or animated ode-heavy productions (this time sorry to all Disney productions, Blues Brothers, Grease, Les Miserables, The Sound of Music, Singin’ in the Rain and Mary Poppins), and finally, this list doesn’t account for music films that are solely platforms to showcase one artists songs (looking at you, Michael Jackson, Prince and The Beatles). Essentially, here are the best mix tapes compiled for a movie soundtrack.

David Lynch’s peculiar “Lost Highway”, much like a number of his perplexing films, has built an impressive cult following over the past 20 years since its release, thanks to it blending of neo-noir, psychological thriller and horror aspects, as well as its dark, industrial rock soundtrack, produced by the Nine Inch Nails frontman Trent Reznor who has since become a pioneering genius in the construction of a number of remarkable film scores.

Away from the films haunting score, which was produced by Reznor, along with long term Lynch collaborator Angelo Badalamenti, and Barry Adamson, “Lost Highway” compiled a collection of evocative tracks that perfectly embodied the haunting composition of the gothic film. The album itself proved to be a surprising critical success, going on to sell over half a million copies worldwide.

As the penetrative film’s opening sequence begins with David Bowie’s weirdly poignant synth track “I’m Deranged”, it later reuses a different edit of the track during the end credits, whilst the rest of the soundtrack is made up of a number of industrial rock and metal tracks from Marilyn Manson, Rammstein, Smashing Pumpkins, along with Reznor’s Nine Inch Nails, that to this day personify 90’s rock music reminiscence, making the right aged audience want to dig out their baggy hoodies and chain/ wallet combination.

Now a frequent TV show director, this was Howard Deutch’s first attempt at filmmaking, “Pretty in Pink” is a romanticised tale of an outcast teenage girl and her rise to high school fame thanks to the attention of a rich jock boy, whilst simultaneously her faithful best friends affections go unnoticed.

A formula that has been used on a number of occasions since, in turn, along with writer John Hughes’ other penned films, “The Breakfast Club”, “Ferris Bueller’s Day Off” and “Sixteen Candles” it has since been considered a cornerstone of the teen comedy genre.

What all the writer’s successful teen comedies during the 1980’s have in common is the fundamental requirement for an upbeat, relatable soundtrack, that is full of loveable new wave pop songs that will pull at the heart strings of their target audience. This was never achieved quite as impressively as it was in “Pretty in Pink”, using a number of psychedelic synth harmonies that were both blissful and catchy, each song served as a perfect commentary to Molly Ringwald’s lead, Andie’s confusing high school life.

Each track, an embodiment of awkward teenage life and their attitudes, whether that be portraying sadness, antipathy, melancholia, or trying to be cool and fit in, each track fit the bill, including numbers from Orchestral Manoeuvres in the Dark, The Smiths, New Order, Echo & The Bunnymen, INXS, and the titular “Pretty in Pink” by The Psychedelic Furs.

“The Big Lebowski” in true Coen Brothers fashion has a stylised opening sequence accompanied by Bob Dylan’s harmonious “The Man In Me”, which is then later reused as backdrop in a psychedelic hallucination scene, following the lead character being knocked unconscious during an immoral crime resulting in a stolen rug.

It is melodic symphonies such as this Bob Dylan track that sets the entire tone of the film, taking the lead character Jeff Lebowski, otherwise known as The Dude’s laidback mentality of life and channelling it further through the means of musical selection.

In a film that makes being a layabout slacker with a penchant for bowling and White Russians a highly desirable career path, it revels in its relaxed feel good mannerisms.

“The Big Lebowski” has a number of sun soaked guitar hits that depict the cool and calm nature of California living, and more importantly, the attitude of The Dude himself, including, Eagles “Peaceful Easy Feeling”, Creedence Clearwater Revival’s “Lookin’ Out My Back Door”, Elvis Costello’s “My Mood Swings” and Gipsy King’s Spanish infused mix of Eagles classic track “Hotel California”.

Its most notable song selection however is the inclusion of country legend Kenny Rogers’ catchy “Just Dropped In (To See What Condition My Condition Was In)”, an effortlessly cool track that is said to be about the dangers of LSD consumption, here functioning as a perfect fitting theme tune for a bizarre and delirious dream sequence, involving a number of suggestive bowling innuendos and hilarious dance moves, that in turn serves as a charming front for a sexual encounter between Jeff Bridges’ lead and Julianne Moore’s unrelated Maude Lebowski.

The divisive “American Pie” franchise has consistently proved itself to be a fundamental pioneer in alternative music, giving a much deserved stage to a number of adored rock bands from across the globe to provide their work to the energetic teen comedy films, most notably that of the pop punk sub-genre. As many pop punk bands such as Blink 182, Sum 41, Sugar Ray, Goldfinger, American Hi-Fi, Lit and The Offspring along with many others have contributed to the franchise’s soundtracks over the years.

Whilst the calibre of films within the “American Pie” franchise have no doubt declined as the years have passed, the original entry, a staple of modern pop culture, served as a hilarious gross out comedy with a number of remarkable scenes that won’t be forgotten in a hurry.

As well as serving as an educational and terrifying introduction into puberty for many of teens in the early 2000’s, the film at times provided a lot of heart, most notably through the main character Jim’s dad, played by Eugene Levy and his compassionate desire to connect with his son and guide him through the difficult time in his life.

The film’s influential soundtrack was perfect for its era, seamlessly summing up the alternative music scene between the late 90’s to early 2000’s, essentially through Blink 182’s highly underrated album track “Mutt” and the inclusion of Canadian rock band The Barenaked Ladies exceptionally unique flagship track “One Week” which was also used in another teen comedy “10 Things I Hate About You” in the same year.

Along with his Music Supervisor Randall Poster, Wes Anderson’s propensity for song miscellany has been applauded over the years, most markedly, in the animated “Fantastic Mr. Fox”, as well as “The Life Aquatic with Steve Zissou”, “Rushmore”, and debatably their finest hour in ditty selections, “The Royal Tenenbaums”.

Anderson’s artistic style rarely fluctuates, opting for a unique and unusual flair of flamboyance and elegance, whilst permeating a soft glowing feeling of warmth and comfort, which is never more apparent than in his visual camera pallet, and jubilant soundtracks.

Its best song choices are the inclusion of Nico’s cosy sounding “These Days” which plays over the slow motion introduction of Gwyneth Paltrow’s fascinating Margot Tenenbaum, a character adored in the real life world of fashion, as well the profoundly heart breaking track “Needle in the Hay” by Elliot Smith, which floods a harrowing scene with depth in which Richie Tenenbaum locks himself in the bathroom and attempts to commit suicide, a truly powerful collaboration between song and cinema.

The film also includes the songs, “Me and Julio Down by the Schoolyard” by Paul Simon, “Stephanie Says” by The Velvet Underground, The Ramones “Judy is a Punk”, “Police & Thieves” by The Clash, Bob Dylan’s “Wigwam” and John Lennon’s emotional “Look at Me”. Further listening will find lesser known golden tracks from Emitt Rhodes and Nick Drake.

It’s character and tone are exquisitely defined by its gorgeously executed cinematography and its compelling music from this opening scene as the driver navigates the city streets, until the end credits roll, the selected records tell as much of the story as the film’s narrative and often subdued lead man, forming a story told in an almost opera format that builds to its final climatic crescendo.

The neo-noir inspired film’s wrap around song is College & Electric Youth’s adored melody “Real Hero”, which stands as a stunning standalone track, whilst pumping emotional life into a number scenes, telling the tale of a flawed anti-hero with compassion and human investment, that despite all odds, looks beyond other’s faults to help them.

As well as a gripping score from Cliff Martinez, its other great music selections includes, Desire’s enchanting “Under Your Spell”, The Chromatics “Tick of the Clock” and the absorbing “Oh My Love”, an opera composition by Riz Ortolani and Katyana Ranieri previously used on 1971’s Italian film “Goodbye Uncle Tom”.